It takes guts to defy your childhood guidance counselor’s expectations that you’ll be nothing more than a garbage collector. Not that there’s anything wrong with that career choice, but grade school years were tough for Greg Reinke nonetheless. And he did it without any guts — or blood.

As a small child, Reinke was deemed troubles by his art teachers for creating “disturbing” little monsters out of clay, but that was a different time. Today, you’ll find more than monsters at the Reinke Brothers costume shop and haunted mansion attraction in downtown Littleton he owns and runs alongside his older brother, Chris Reinke. 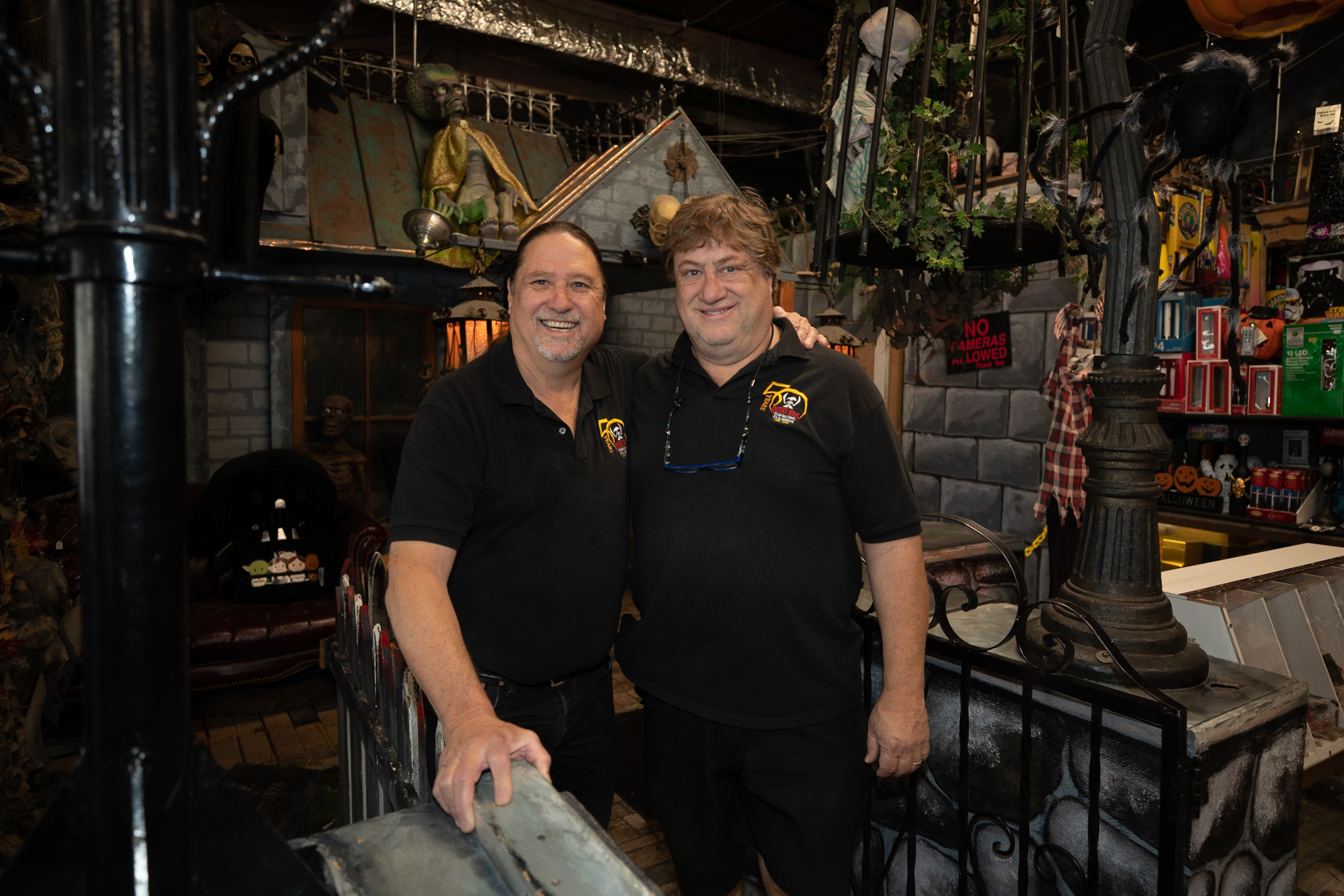 Together with their combined imaginative talents, Greg and Chris have made creepy costumes, paralyzing props, movie makeup and monsters that move (and sometimes sing) using animatronic technology their career. And they’ve been doing it since puberty.

When you ask Greg about his first-ever haunted house, he talks adoringly about fishing with his father in 1968.

“I caught a shopping cart,” he said.

After pulling it to shore, Greg and his brother decided to create a makeshift haunted house built using blankets, props and strobe lights and charged neighborhood kids a penny to ride in the shopping cart of horror. The stunt later drew more attention and they earned their first paid gig building a haunted house.

“I found there was a niche for this and it was entertaining, fun and exciting,” Greg said.

With the encouragement of their parents, Greg and Chris opened their first official Reinke Brothers haunted house in 1984 at Cinderella City, a former shopping center in Englewood that was demolished in 1999, before relocating to their present-day Littleton location.

The business has been booming since. Entering the Reinke Brothers shop in Littleton can be overwhelming if you’re not sure where to look. The staff is trained to handle all sorts of Halloween and holiday costume design requests and point customers in the right direction.

“As you can see, I buy a lot. I’m the biggest you-don’t-need-it store in America. There’s absolutely nothing here that you need,” Greg joked.

Greg does, however, choose to support local businesses, rather than scout out specific props made in China.

“I try to find local artists. I have a lot of local artists that make things. I try to buy as much local stuff that I can,” he said. 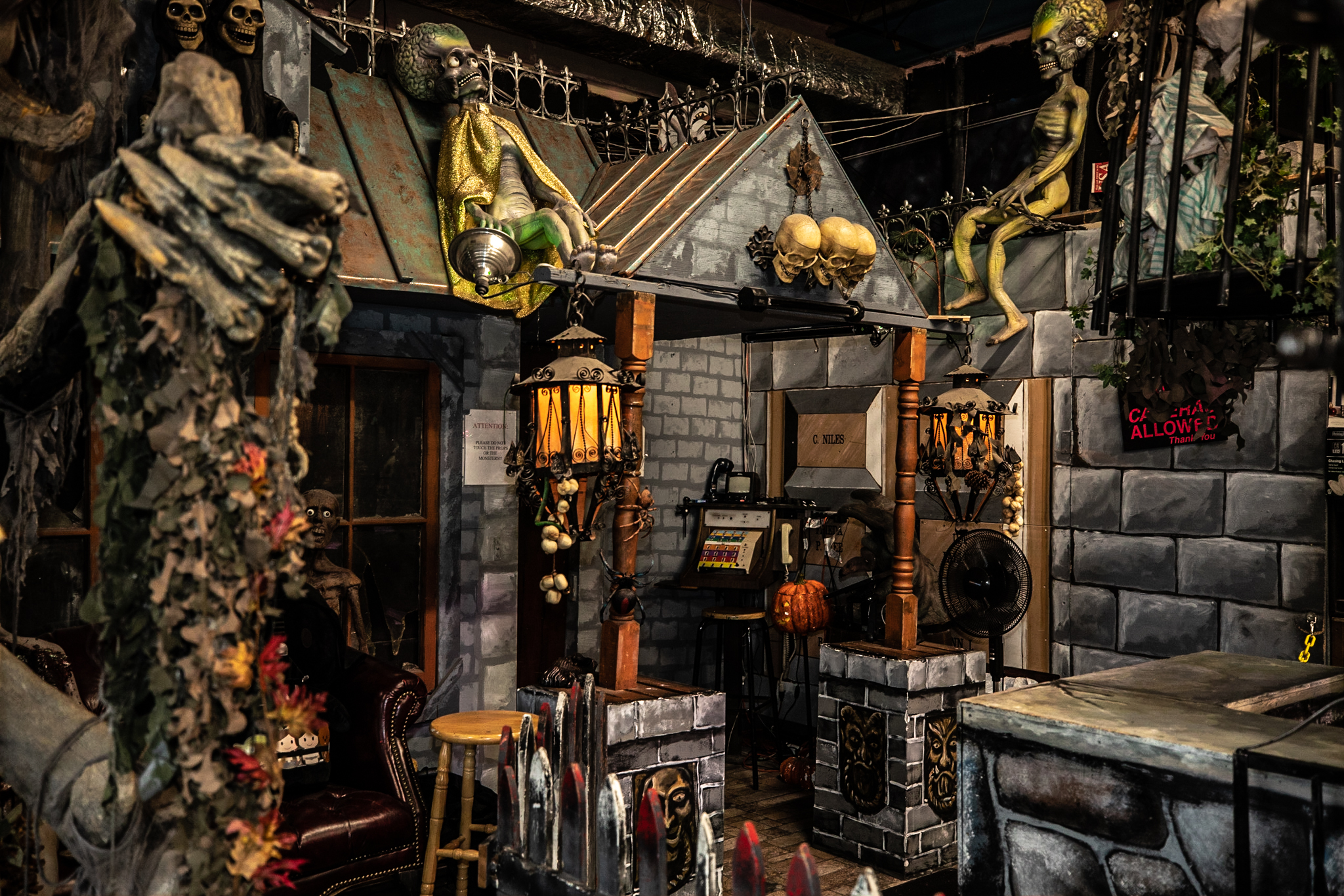 The store also features a deli counter featuring a “butcher” who will wrap up grotesque artificial body parts covered in fake blood in butcher paper after meticulously weighing them for an entertaining show.

The “milk” counter as the brothers jokingly refer to this butcher, is named for the way milk is stored at the back of the grocery store, so you have to search for it. Greg says this is to deter children from picking up inappropriate macabre props and steer kids away from the blood and gore. In fact, the haunted mansion at Reinke Brothers doesn’t contain any gore at all.

“Imagine if you’re walking through and you have a six or seven-year-old and there’s a woman cut in half with her entrails hanging all over and a guy with an axe. What would you tell your kid?” Greg said. “That doesn’t scare anybody. It just grosses you out.”

While his friends in the haunted house industry sometimes prod Greg that his haunted mansion attraction isn’t scary enough, he says that’s not his goal.

“It’s about entertainment. We’re here to entertain people. That’s where most people have lost what this is all about. They’re so busy trying to scare you or be gross that it’s not fun,” he said.

The kids are especially important to Greg. While his attraction does contain frightening scenes, he encourages families to attend a special tour held from 10 a.m. to 1 p.m. on Saturday and Sunday mornings, where kids get to see how the haunted mansion works with the lights on. The children are allowed to touch the props and later, if they’re brave enough, experience the real haunted house. 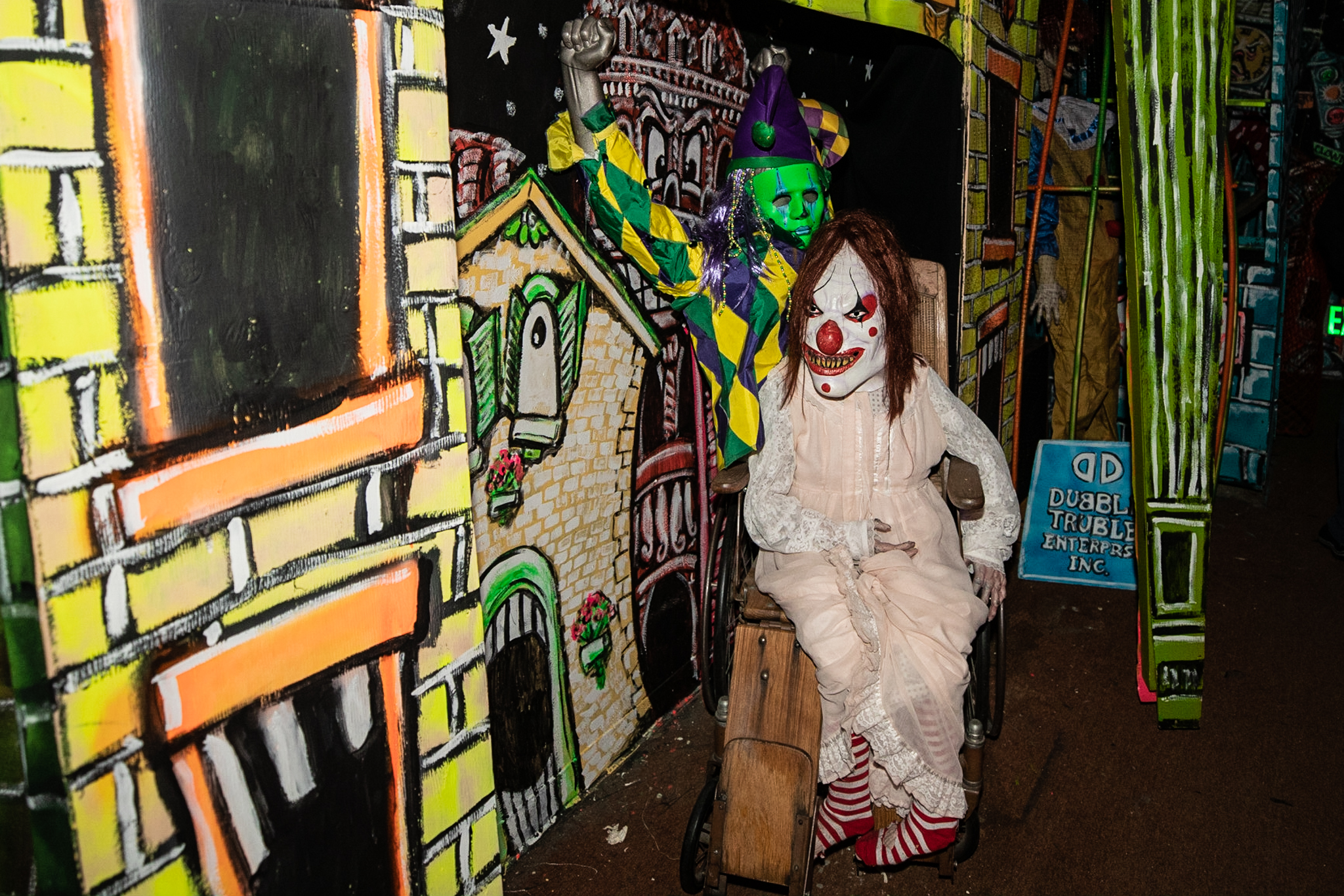 “They get to see the difference between fantasy and reality,” Greg said. “I’ve had generations of people coming here now. I’ve had grandparents bring their grandchildren here. When you entertain, people have a good time.”

Greg says that the haunted mansion changes out every year with new additions he and his team start preparing for in January, but the monsters and creatures hidden among the heaps of Halloween merch in the store are also incredibly fun to witness at Reinke Brothers. They’re not available for purchase, but some of them can sing and dance to entertain those waiting to enter the haunted attraction.

The creatures include a dancing skeleton who sings “Jeremiah Was A Bullfrog” and other tunes that took roughly six to eight months to design, a mechanical dinosaur that kids will soon be able to ride and other monsters that move on command.

The Reinke Brothers’ creations are so elaborate, the movie industry has been hiring them for over a decade to work on specific props and costumes.

“They send us what they want and we’ll just ship it to them after we build it,” Greg said. “We build sets for movies, commercials and all kinds of stuff.”

Greg and his brother have worked on props, costumes and sets for The Shining, Maverick, Goonies, Dinotopia and many others. The Reinke Brothers even own the rights to Mrs. Bird, Big Bird’s mom from Sesame Street (who supposedly lives in Denver), and have a personal letter from Jim Henson stating that they can make her.

Greg can’t remember every movie and commercial he’s worked on, but he has scrapbooks and scrapbooks of old sketches he jokes will one day be worth something.

Unlike most of the talented team members at Reinke Brothers, Greg and Chris never went to art school. Everything was learned by trial and error, which is pretty impressive, given the diligent handiwork and detailed artistry behind the painted and sculpted creatures and monsters. 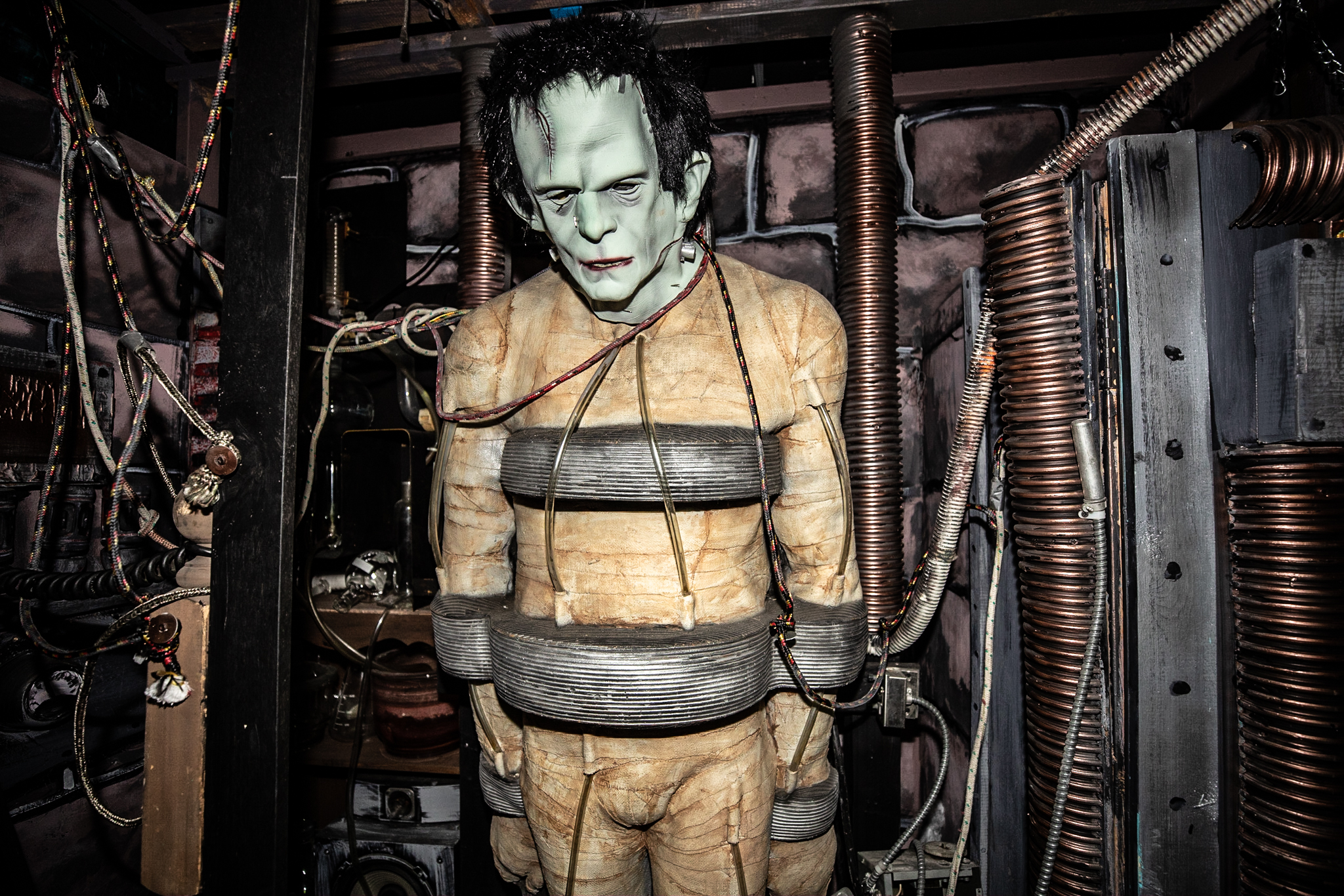 We asked about the most intense costume they ever created, and the answer was surprising.

“Frontier Airlines wanted a seat that looked just like the ones on Frontier Airlines. They wanted the screen on the back of the seat. They walked around [in the costume] and they [looked like] a seat on a plane,” Greg said.

According to Greg, he loves October 31 because he loves to see what people come up with. His customers’ imaginations inspire his own.

“Halloween is a very unique holiday. It’s about you. You can spend as little or as much as you want on you. You’re not buying a costume for somebody else or buying a gift. It’s all about you and that’s what makes it fun.”

Reinke Brothers is located at 5663 South Prince St., Littleton and is open from 10 a.m. to 10 p.m. Sunday through Thursday and 10 a.m. to midnight on Friday and Saturday. The Haunted Mansion runs through Sunday, November 3 and tickets are $19 per person. You can purchase tickets here.