As one of the longest-running events at the Denver Art Museum, the Annual Friendship Powwow descended on Denver this past weekend bringing together hundreds of Native American dancers, drum circles, and attendees alike. The event’s official name – the 30th Annual Denver Art Museum Friendship Powwow and American Indian Cultural Celebration was exactly that – a celebration of Native American culture and a gathering of friends for the community.

However, despite the event marking a major anniversary, this year was bittersweet, as it was missing a person who played a large role in previous powwows – Nancy Blomberg. 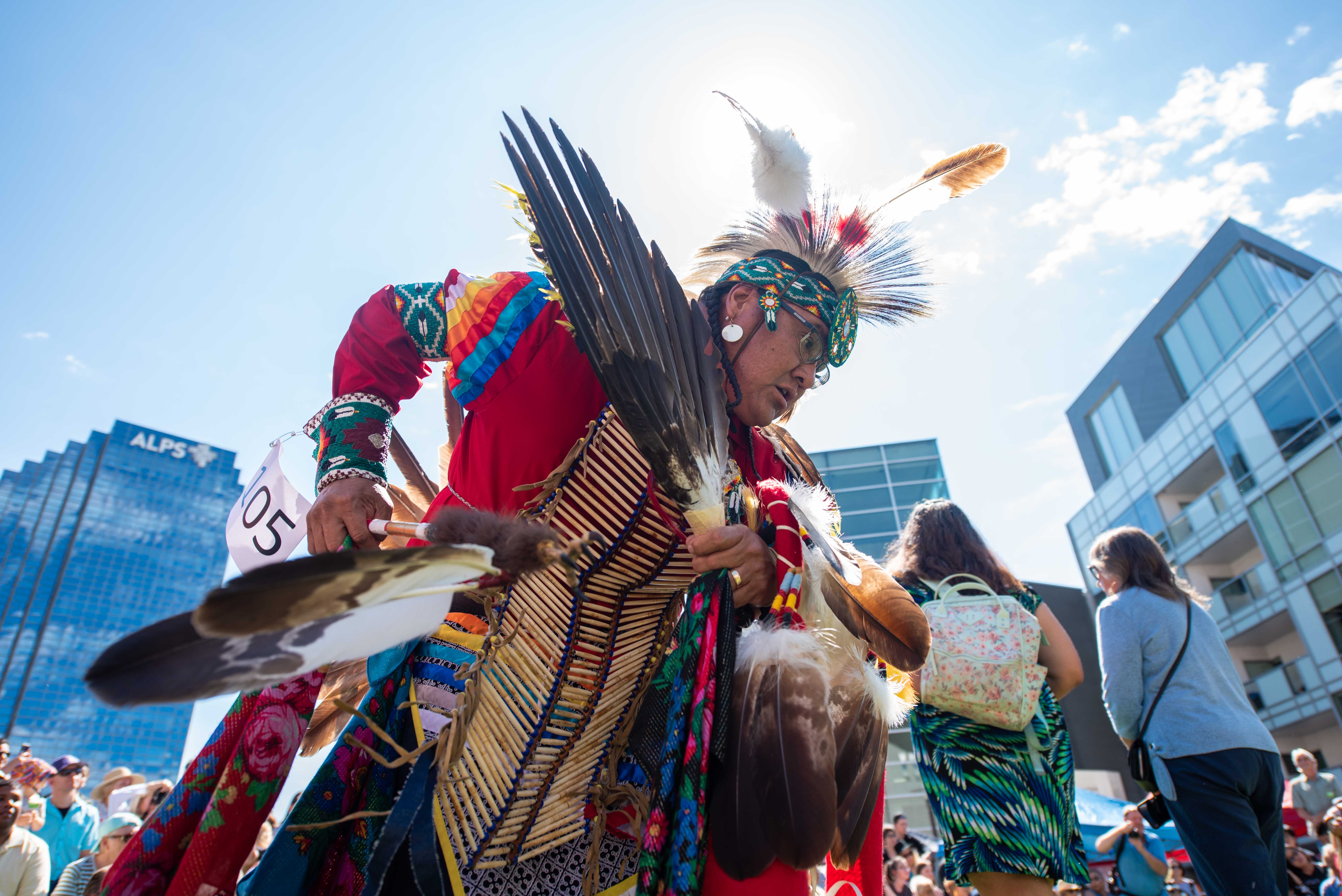 With help from partners in the local Native community and the Native Arts Department at the Denver Art Museum, the powwow kicked off with a memorial for Blomberg, the former chief curator of art and the curator of Native arts at the Denver Art Museum who passed last September. Blomberg was honored with a traditional ceremony called a “Wiping of Tears” where friends and family were able to take time to remember Blomberg and have others give their condolences. During this time attendees were asked not to record and take photos due to the sacred nature of the ceremony and out of respect of the friends and family of Blomberg.

The powwow then moved on to the Grand Opening with an introduction of all of the dancers, and the drum circles who would be performing that day. The grand opening also hosted an all-female color guard comprised of the Native American Women Warriors – a group of women veterans.

The sun beat down brightly on Martin Plaza in front of the Denver Art Museum making for a blistering day for all dancers in their elaborate dancing wear and often feathered headdresses. Lakota MC Steve LaPointe explained to the crowd each portion of the event by describing the significance of each dance or song and which tribe it came from and how different movements expressed different meanings.

LaPointe and powwow staff also took time to introduce Native groups and families that were making a difference in the community — including a Native American student group at the University of Denver and a student from the Denver Community College. This group was introduced into Denver Native Community.

The powwow itself was also a contest – meaning that all of the dancers who performed throughout the day were competing against each other in different sections and categories. Attendees could watch dancers compete in categories from the youngest at Tiny Tots – which ranged from zero to six years old — all the way up to the Golden Age category, who competed at 55 years old and up.

Within each age range, performers did different traditional dances such as a grass dance that represented how the prairie grasses moved in the wind or a “fancy” dance where dancers put all of their energy and power into a fury of movements. Throughout each of these categories, dancers were also able to take part in intertribal dances and let loose to dance with everyone.

As dancers performed, the drum circles put forth just as much effort. Each song was pounded loud into the air, vibrating into the ears of dancers and attendees alike. All of the performances of the day were filled with heart, soul and sweat as the sun continued to shine.

The vendors who presented their items at the celebration traveled from the surrounding states and cities bringing art, jewelry and more. One vendor, Shan Wero (Navajo) traveled eight hours from New Mexico to sell jewelry. Throughout the vendors, there also stood food stands where powwow goers could snag delights of fry bread smothered with honey and sugar, Indian tacos and other snacks.

At one point of the day, there was a Tiny Tots Special in honor of Nancy Blomberg that was sponsored by the Native Arts Department as well as a new song that debuted by Kiowa Andy Cozad that was specially composed for the Denver Art Museum and to pay homage to Blomberg and the work she did in the Native Art community.

John Lukavic the Curator of Native Arts at the Denver Art Museum gave a bit of insight into why the powwow is so important to the museum and the surrounding community.

“From a curator’s perspective, it is nice to see people who are coming to the museum and everyday visitors have an opportunity to have new experiences like the vitality of the Native community here. The Front Range region is one of the largest urban Native communities anywhere in the country. And I don’t think people recognize it or under understand that or see that all the time, but this is a way of making sure the community is front and center and this our way of honoring them,” stated Lukavic.

For three decades, the Friendship Powwow has played a part in connecting Native communities and the general public together. And even though this year was marked with the loss of an integral role – the powwow and community continued to stay strong to bring forth a beautiful celebration of culture and art for its 30th time.

Editors Note: Information in this article has been clarified and corrected.