Imagine staring at The Creation of Adam for as long as you want, without craning your neck upwards — and maybe even sitting on a bench in front of it. As one of the most well-known frescoes, it’s been reproduced and mimicked countless times, but due to its location on a ceiling, few onlookers have truly studied it. The same goes for the many other vignettes the artist Michelangelo painted in the chapel, from The Last Judgement to the five Sibyls — until the traveling Sistine Chapel exhibit.

Now, that exhibit will open in Denver at the Stanley Marketplace on July 4 and remain on view through August 13 — and we have a sneak peek. Featuring 34 museum-quality reproductions that are nearly the original size along with in-depth descriptions and an audio guide, the Sistine Chapel is more accessible than ever. Each mural is accompanied by a “map” of where it is in relation to the other murals in the chapel, and a select few hang from the ceiling horizontally to replicate the act of looking up. 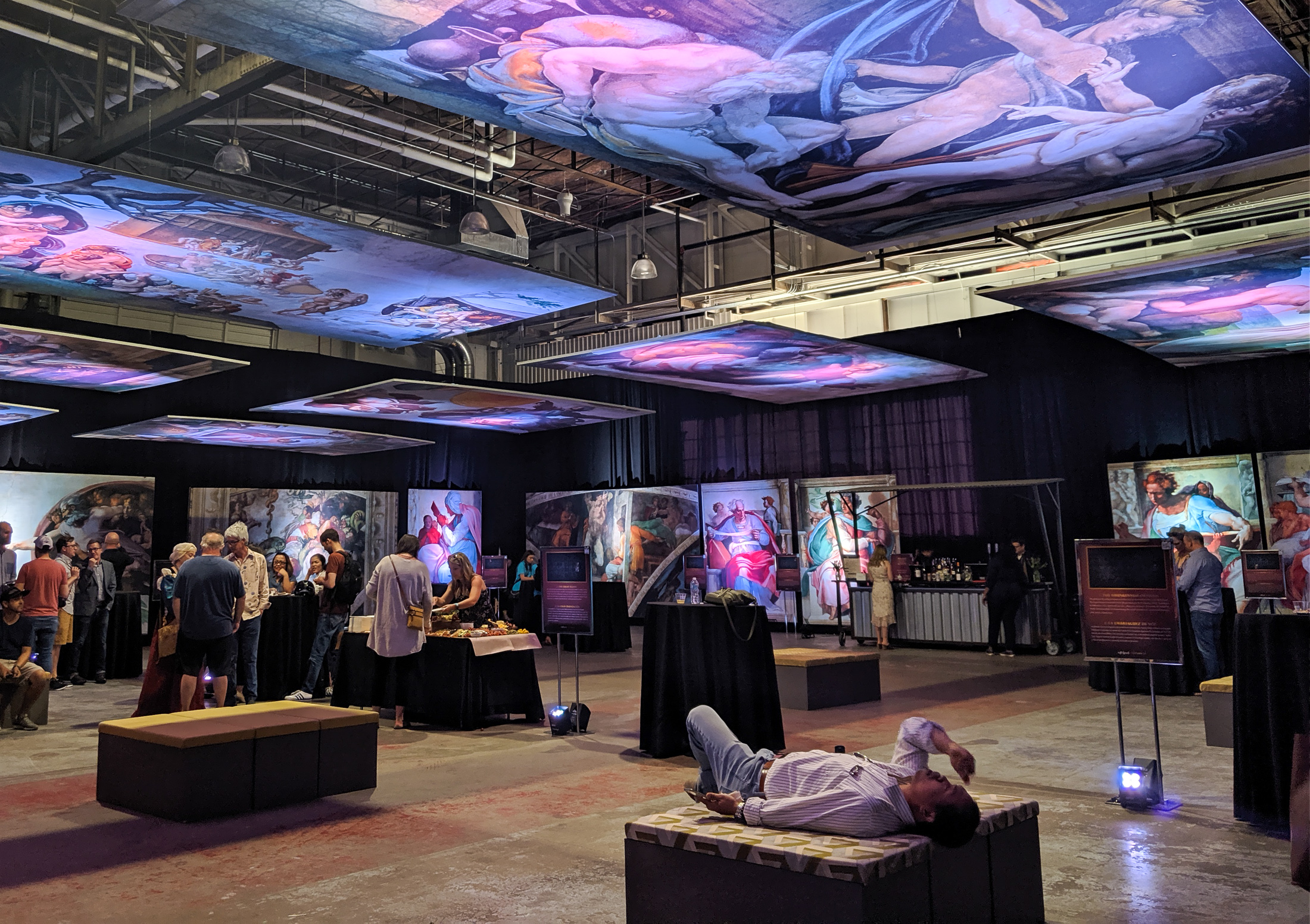 But, unlike the actual experience, this exhibit is designed to allow for elongated experiences with the iconic paintings. Benches encourage viewers to sit in front or beneath a panel for as long as they wish. As long as you don’t touch the reproductions, you may approach it within a few inches and inspect the brushstrokes of the master. These seemingly simple acts are monumental when you consider how difficult it is to appreciate the frescoes in their actual home, with bustling crowds of onlookers and anxious security guards nudging you along.

For the historical part, the Sistine Chapel frescoes were painted between 1508 and 1512. Pope Julius II commissioned the project — which would require painting over existing designs on the ceiling — and was adamant about acquiring Michelangelo for the task. At first, Michelangelo denied the invitation, and then essentially ran away when the Pope had to leave town in 1506, only to return a few years later to complete the project.

Part of the beauty of the exhibit is in its organization. Viewers move from unfamiliar panels toward ones that have garnered more attention — like David and Goliath and The Creation of Adam — finishing with The Last Judgement (which takes up an entire wall inside the repurposed airplane hangar in Stanley Marketplace). Not only do the visuals crescendo as viewers step into the large open space in the middle, but so does the narrative that accompanies each mural. From descriptions of Michelangelo’s style to overarching theories about the positioning of each panel, the narrative reminds the viewer that these ceiling murals were taken seriously.

It is in the main cathedral-type setting that it becomes clear how immensely talented Michelangelo was to complete such an enormous (and excellent) task. In order to reach the ceiling, the artist designed his own scaffolding that fixed into the walls rather than building up from the ground. He then spent countless hours standing atop this scaffold (contrary to popular belief that he was lying down during the process) with his head tilted back, causing quite a bit of discomfort. As if those aspects of the job weren’t enough to make someone not want to do it, Michelangelo didn’t want to do it in the first place. He was primarily known as a sculptor and the task of fresco painting (a special technique with damp lime plaster and water-based pigments) was new and unfamiliar to him. Despite all of this, he taught himself the fresco technique, designed the scaffold, stood atop it for several years and refused to have help from anyone else.

Once you realize that he was adept at sculpture, the paintings from the Sistine Chapel suddenly take on more significance. The musculature of the people is idealized in a way unlike other painters of his time. The depth between foreground and background is strikingly accurate. Both of these stylistic choices (and more) illustrate Michelangelo’s ability to conceptualize in three-dimensions, as he would when sculpting. 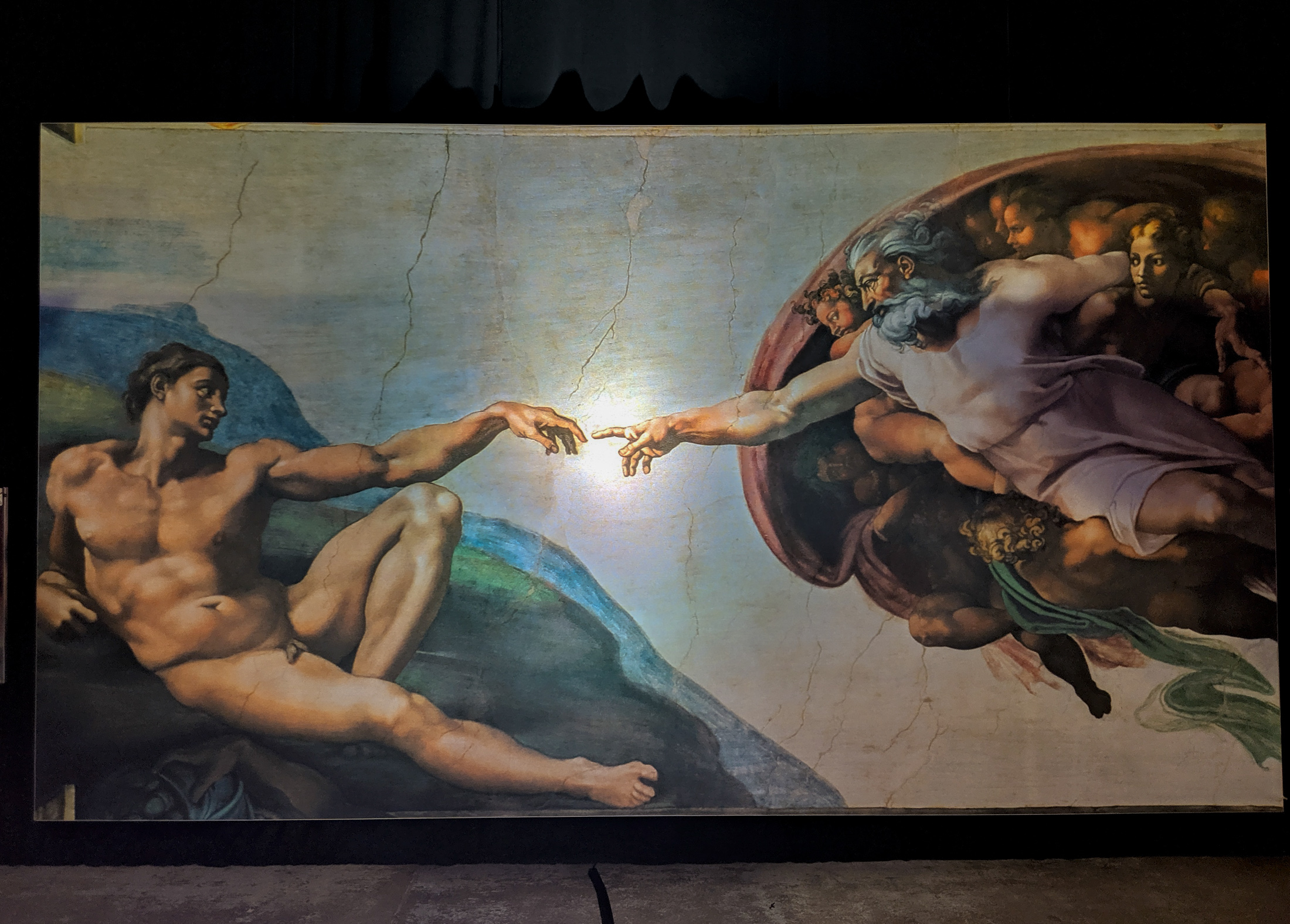 “The Creation of Adam”

Aside from gazing at these reproductions, Stanley Marketplace is also organizing events within the exhibition ranging from yoga to disco parties to swing dancing and education lectures. Starting July 10 and recurring every Wednesday night until August 7, visitors can participate in a paint-and-sip class surrounded by the frescoes and inspired by Michelangelo, taught by Aurora’s Painting with a Twist. On July 12, DJs Clayton K and Eric Lake are throwing a Holy Disco! Italian Disco Party where polyester attire is encouraged. If you prefer to watch dancers rather than dancing yourself, stop by on July 13 or August 3 for a modern dance performance performed by Kim Robards Dance, presented with chamber music and elegance. For a full schedule of the rest of the events and to purchase tickets, go here.

Ultimately, even if you want nothing to do with the religious part of the frescoes in the Sistine Chapel, the process behind their creation was monumental in art history. Michelangelo mounted many odds (physically and figuratively) in order to finish every panel and his efforts are worth seeing, even if you can’t travel to Italy to experience it in person. In fact, traveling to see the chapel in person may be detrimental to the longevity of the frescoes, which have proven resilient despite existing more than half a millennia. So do yourself — and future generations — a favor and visit the reproductions of Michelangelo’s painting while they’re a short drive away.

The Sistine Chapel exhibit will be open daily at The Hangar at Stanley from July 4 to August 13, 2019. Tickets will be $16 per person and are already on sale, here.