If you found a cauldron on the front lawn of a church in North Carolina, gathered around it picnic-style and invited your favorite songwriter — then called down all your neighbors from the mountains — you might be able to get a taste of the essence that is Rainbow Kitten Surprise.

The alt-rock, indie five-some from the south has had a lot on their plate recently, including last month’s release of their EP Mary (B-sides), last year’s album How To: Friend, Love, Freefall and an ongoing tour. On June 11, Rainbow Kitten Surprise will perform at Red Rocks alongside their ride-or-die, Caamp, and deliver what is sure to be a set of enigmatic magic.

We had the chance to check in with bass player Charlie Holt before the group’s Denver arrival, and they clued us in on what to look forward to.

Charlie Holt: It’s going so well, so well. We played at Boston Calling and that was really fun. We haven’t played a festival like that in a long time, so it’s really awesome. We just came to the West Coast — we did Seattle and Portland and that was so fun. The energy was so great. I love these “two-in-a-row” shows, you know? We can build a vibe for a whole weekend — or make a weekend in the middle of the week.

303: That’s amazing. You guys just released the EP Mary (B-sides). Can you tell me a little more about the songs “Heart” and “No Vacancy?”

CH: Those were songs that were originally supposed to be on Mary, the first EP. They’re songs that Sam [Melo] wrote before Rainbow Kitten Surprise was a thing. And then we built it all together, played lots of different versions of it throughout the years. So a lot of our old fans were familiar with it and the different ways we would play it. It was actually a Youtube video at one point — just Sam playing “Heart.”

We practice new songs at our meet and greets. So it’s cool, some people already know it, and people are really excited for your new stuff. It’s cool to get on the next page because we’ve been playing it for a while now.

303: Is there another album on the horizon?

CH: We’re always working on stuff — always working on new music. A new record is always on the horizon. It’s kind of just like, how can we organize all these musical ideas and songs into the record. It’s a process we’re excited to dig into — after Red Rocks.

303: How do you channel your energy on stage?

CH: Definitely embrace the energy of the crowd. Once the song’s out there, anybody can interpret it and connect with it the way they want to. And you see people really who’ve connected to it in similar ways that I’ve connected to these songs. And it’s cathartic, you know, to feel those emotions again with other people — and have it be good.

303: Definitely. You’re feeding off each other.

CH: Definitely off of each other. The music, the beat, you know. But the crowd, definitely. When the crowd is vibing, that’s what turns a good night into an amazing night.

CH: I’ve been to walk and hike but never to a show. So it’s gonna be my first time. First show. I can’t wait. 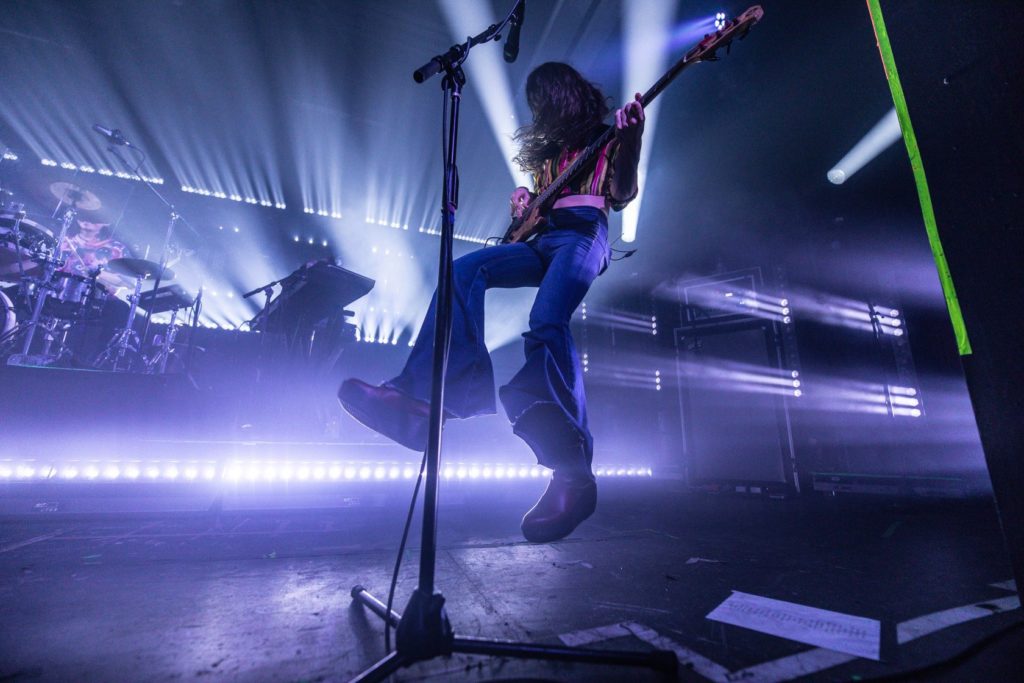 303: I’ve heard your music described a lot of different ways. How would you describe the ‘Rainbow Kitten Surprise sound?’

CH: It’s stream of consciousness, sad-boy shit. That’s probably the best way to put it. We all listen to different types of music, so it comes together as something that we can call ours. That’s something we strive for, is being true to our sound and expanding on it.

303: By that same token, there’s a lot of religious terminology in your music — and I like that, because it adds that other-worldly element. Is there intention behind that?

CH: Definitely, there’s intention with everything. But we all grew up in the South, and religion is something that is ubiquitous and inescapable, and it impacts everyone’s lives there. It’s definitely affected the way we write music.

303: You guys recently performed a few shows in North Carolina.

CH: I grew up right over the border, in a small town in South Carolina, but everybody grew up in different small towns in North Carolina. Sam grew up partially in the Dominican Republic and has so many crazy stories. We met in college in the mountains, that’s where it all started.

CH: It’s something that’s important to us. In North Carolina, there’s a lot of discrimination that the LGBT community experiences — and there are a few laws that were overturned by the Supreme Court — but that mentality is still there. To help our hometown, to help North Carolina and the people we know personally who are affected by it.

303: Have you toured with Caamp before?

303: What do you want people to take away from a Rainbow Kitten Surprise show?

303: How did Rainbow Kitten Surprise get its name?

CH: I’m looking around the corner to see if my friend Noah [is there.] He’s on tour with us now. Our friend Noah from freshman year, he got really sick with meningitis. He was in a coma – it was really bad. They weren’t sure if he was gonna make it — he pulled through, you know. He was still in the hospital recovering when Sam and Bozzy [Keller] were going to play their first open mic night. They literally went into the hospital and they were like, “Well, we can’t write ‘Sam and Bozzy’ on the open mic night list. What should our name be?” And he [Noah] said it — the first thing out of his mouth: “Rainbow Kitten Surprise.” Like it was nothing. I think the foresight on that is genius. I think he’s brilliant.

303: Is there anything you want the Denver community to know before you guys come through?

CH: They know what to do. Denver always comes through.

The sold-out show will be live-streamed on Rainbow Kitten Surprise’s Youtube page at 7 p.m. on Tuesday, June 11. Select songs will stream on the group’s Facebook page.