Tuesday’s The Hang, an indoor bouldering competition hosted by Earth Treks, brought an estimated 500 attendees, climbing “legends,” and competing climbers from recreational, to advanced, to pro level. Energy buzzed throughout the climbing gym after a day of Outdoor Retailer, with excited climbers, spectators, and fans hoping to meet Alex Honnold, star of the award-winning documentary Free Solo. 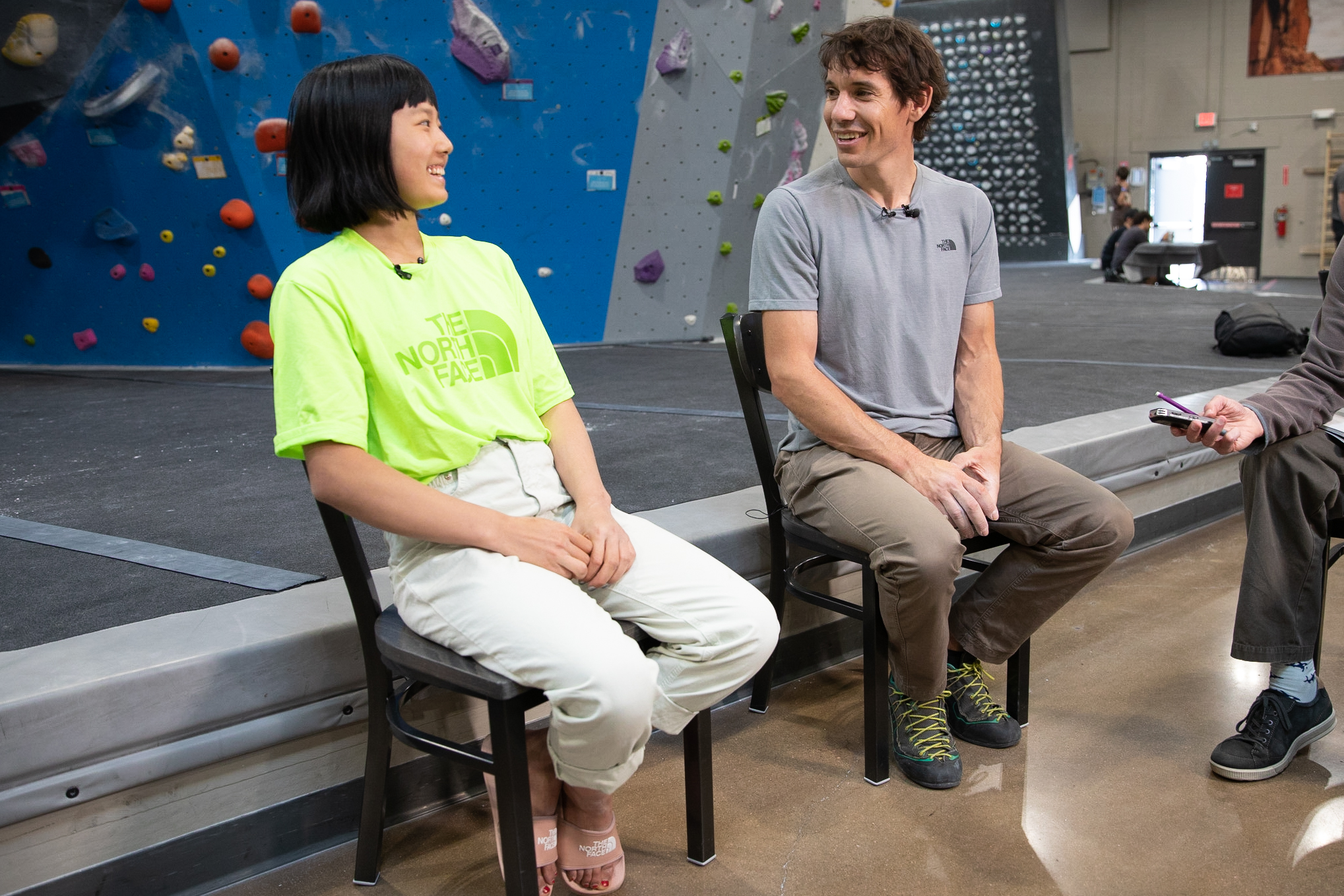 Alex Honnold and Ashima Shiraishi attended The Hang to meet fans and answer questions about their climbing and projects. Honnold is also the newest Board Member at El Cap, EarthTreks parent company. He shared what he’s been up to since the release of Free Solo. Honnold said his life has changed “a fair amount” since it came out, in that he’s been pretty busy. Shocking, we know, but Honnold doesn’t seem to like the fame.

When asked if he liked the way his life has changed, Honnold said, “It’s fine, I mean it’s a path I chose. When you choose to make a film about yourself and then I chose to promote the film as well, and so then the film did surprisingly well, it’s just how that went down. I wouldn’t want to do it forever. I mean I love just going outdoors and climbing all the time.”

While he’s in town, Honnold shared how he enjoys climbing in Boulder and around Estes Park, as well as in the large indoor climbing facilities like Earth Treks around the Denver area. Honnold shared how after six months of touring for the film and attending event after event, he had a bit of a physical crash. He feels that things have simmered down now, giving him more time to climb. Honnold was hopeful that the attention will soon turn to someone else.

“I think my privacy is gone for a bit, but hopefully in the 2020 Olympics climbing will have a new face and then it’s all good,” said Honnold.

That new face may very well be Ashima Shiraishi, who just won the 2019 Bouldering National Championships. Shiraishi talked about her celebration of this victory, which included more climbing, but this time, outside.

“It’s harder to completely be committed to competition climbing because I think climbing outside, you kind of need both outside climbing and indoor climbing to actually be motivated all the time and to grow more so I think having a balance of both is essential,” said Shiraishi.

Shiraishi is currently training for the Tokyo 2020 Olympics.

The Hang’s bouldering competition featured climbers of varying levels, some dressed in crazy costumes and wigs, to compete for raffle tickets, product prizes and cash prizes. Competitors climbed problems based on their climbing level—recreational, advanced, or pro—and competed with climbers of the same level.

Pro women climbers Ashima Shiraishi and Nina Williams traded off working on a problem amidst dozens of other pros and recreational climbers. Pro women climbers worked on problems V7+ and pro male climbers worked on problems V8+. Pros competed by working on five different boulder problems for all or a portion of a $5,000 cash purse, which was distributed evenly among those who were able to complete the climbs, giving more to the climber who claimed the first ascent.

The Speed Climbing Showcase wrapped up the night, with pros competing in fast-paced speed climbing competitions.

The Hang transformed many of the usual workout areas of the Earth Treks gym into a gathering of product booths and events related to climbing. The yoga studio hosted two screenings of the film Adaptive, a film about two climbers, Jim Ewing and Maureen Beck, who completed the first unassisted adaptive climb of the Lotus Flower Tower in Canada.

Booths from Colorado Mountain Club, which hosted a rope coiling contest, Wild Country, Scarpa, Goal Zero and many more were set up to show spectators their products and provide fun activities. A zigzagging line also formed as fans waited to meet Honnold. A local-based beer tent and food trucks were also set up for both climbers and spectators.