La Fiesta Piñateria Creates Custom Piñatas of Anything You Want

When the Jamison sisters acquired the vibrant, textured, candy color-coated piñata store on Federal Boulevard from a friend last June, they had no idea what they were in for. Maria Guadalupe “Lupita” Jamison and her younger sister Martha grew up in Chihuahua, Mexico, but admit they never partied with piñatas growing up. Running the colorful corner store in The Highlands is a new adventure for them — one that’s highly entertaining. Martha says she takes a break from selling used auto parts part-time with her husband and comes into La Fiesta Piñateria y Floreria ready to create and sell each customer’s dream piñata.

No seriously, the sisters will custom order or personally create any shape, color or size piñata you want. 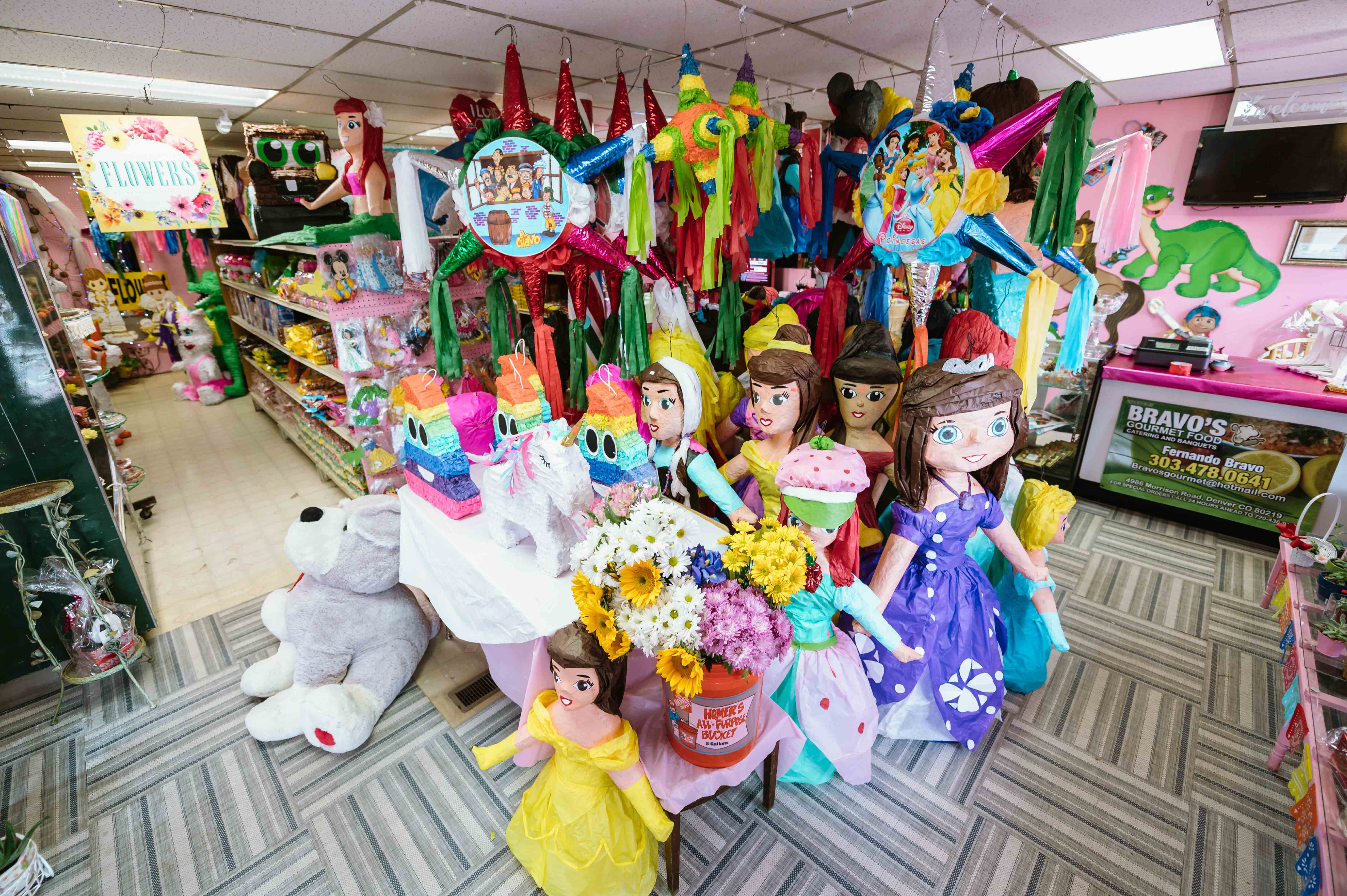 And yes, the job does get a little strange. Maria says they have sold everything from a Cinderella piñata for a little girl’s birthday party to an ex-boyfriend piñata that resembled a customer’s lover.

There’s nothing the sisters won’t order or make for customers, which they say is a carrying tradition of the store. The previous owner of La Fiesta was well known in the neighborhood for selling custom piñatas including more recently, Donald Trump piñatas.

“People from everywhere come here to order their special piñatas,” Martha said. “We’ll make what the customer wants. Even adult piñatas, but we don’t display those for obvious reasons.” 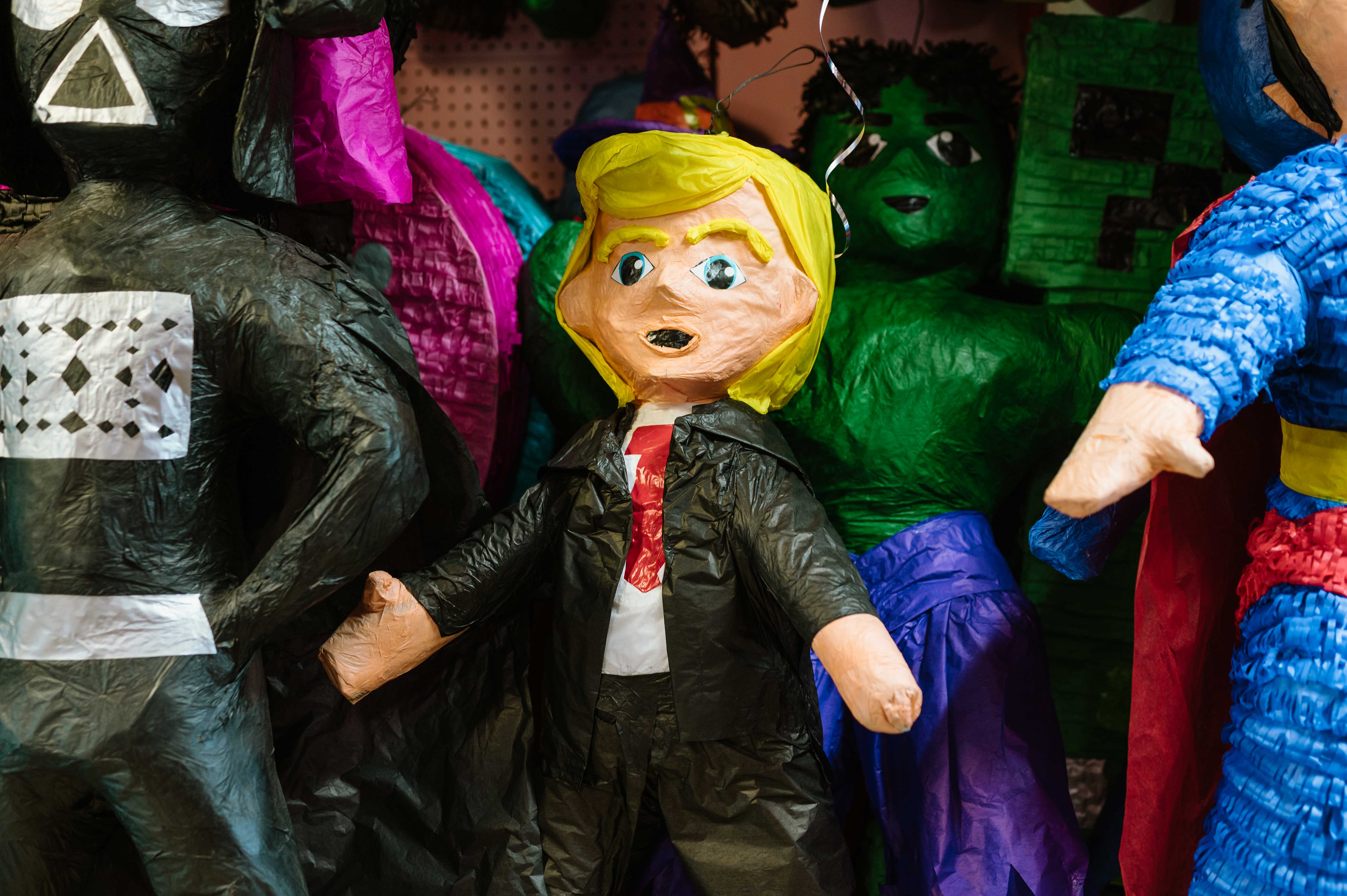 On display in La Fiesta, you’ll find piñatas ranging in size of mostly cartoon characters from Disney movies and other children’s films, animals and the more traditional Mexican star or donkey piñatas. But if you head to the back room you’ll see what Martha and Maria are working on. When a customer comes in with a custom order, the Jamison sisters will try to order it first from a professional piñata maker in El Paso, Texas or Ciudad Juárez, Mexico, but if the customer has a tight deadline, they will make it themselves.

The sisters recently finished a giant basketball. Martha says making the shape for the basketball out of cardboard and glue before papier-mâché wasn’t too difficult since the piñata is round, but some other requests have been more difficult. After the papier-mâché process is complete, the piñata will be decorated in strips of colored tissue paper that the sisters cut themselves in addition to other embellishments such as ribbons and craft paper depending on the piñata they’re working on. 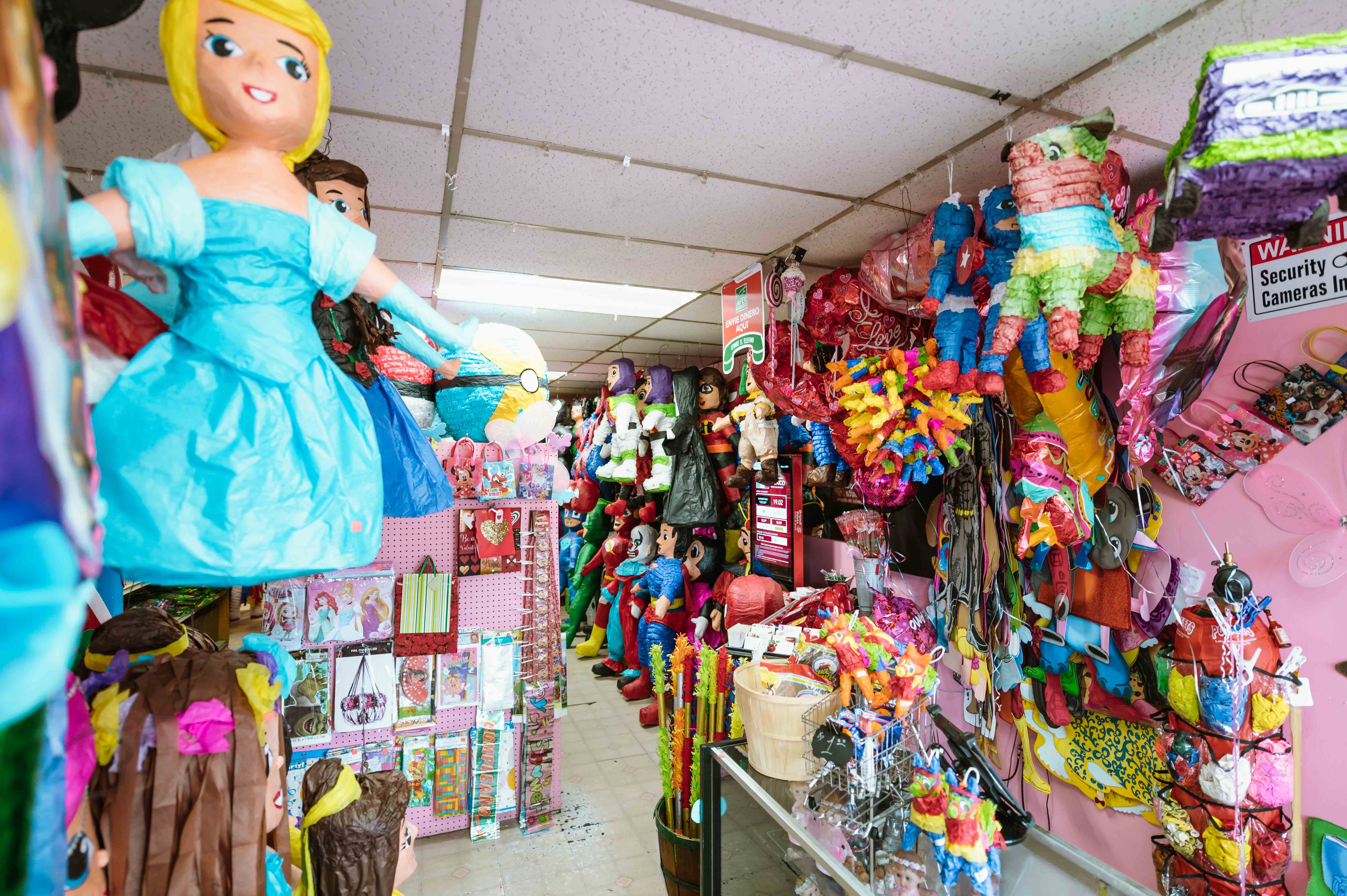 According to Martha, creating a custom piñata can take up to a week depending on the size and the time of year. “The time-consuming part is the glue. You need to let it dry. You need to layer the paper and glue and let it sit overnight to dry. If you do all the layers at once, it would be wet inside forever. So it takes about a week or four days to dry. In the summer, it’s about four days,” she said.

Before working at La Fiesta, the Jamison sisters didn’t have any piñata making experience, but now they’ve gotten pretty good at bringing customers’ creations to life. When a customer decides they want a custom order, the only inspiration the sisters have to go off of is a couple of photos from the customer that depict what they’re envisioning or simply getting a detailed description. Martha admits they can’t read your mind, but they will do their best to make sure it’s as close to what you want as possible. Pictures are important.

“They have to be happy with what they get if they don’t have a specific picture. We always make sure they understand it’s not going to be exactly the same,” Martha said.

La Fiesta is also dedicated to making any size piñata you want. And sometimes it gets a little extreme. Some people will pay up to $55 for a large-size customer order piñata or as little as $4.50 for a baby one. It depends on the order. Recently, one of their custom creations was so big the customer came back with three different size vehicles before he was able to get it home. Martha noted that it wasn’t able to fit inside the store. “We had to call the customer to come to pick up his special order piñata, so he could get it from the sidewalk,” she laughed.

The custom piñatas at La Fiesta are sometimes a little bizarre, but both Maria and Martha agree that they really do make their customers happy. The strangest one Martha remembers was creating a large cancer cell piñata. “Somebody beat cancer and I don’t know the relationship between the customer and the patient, but they wanted to give him the piñata to celebrate because he beat cancer,” she said. “It was a round shape with lines around it. Like a cloud.” 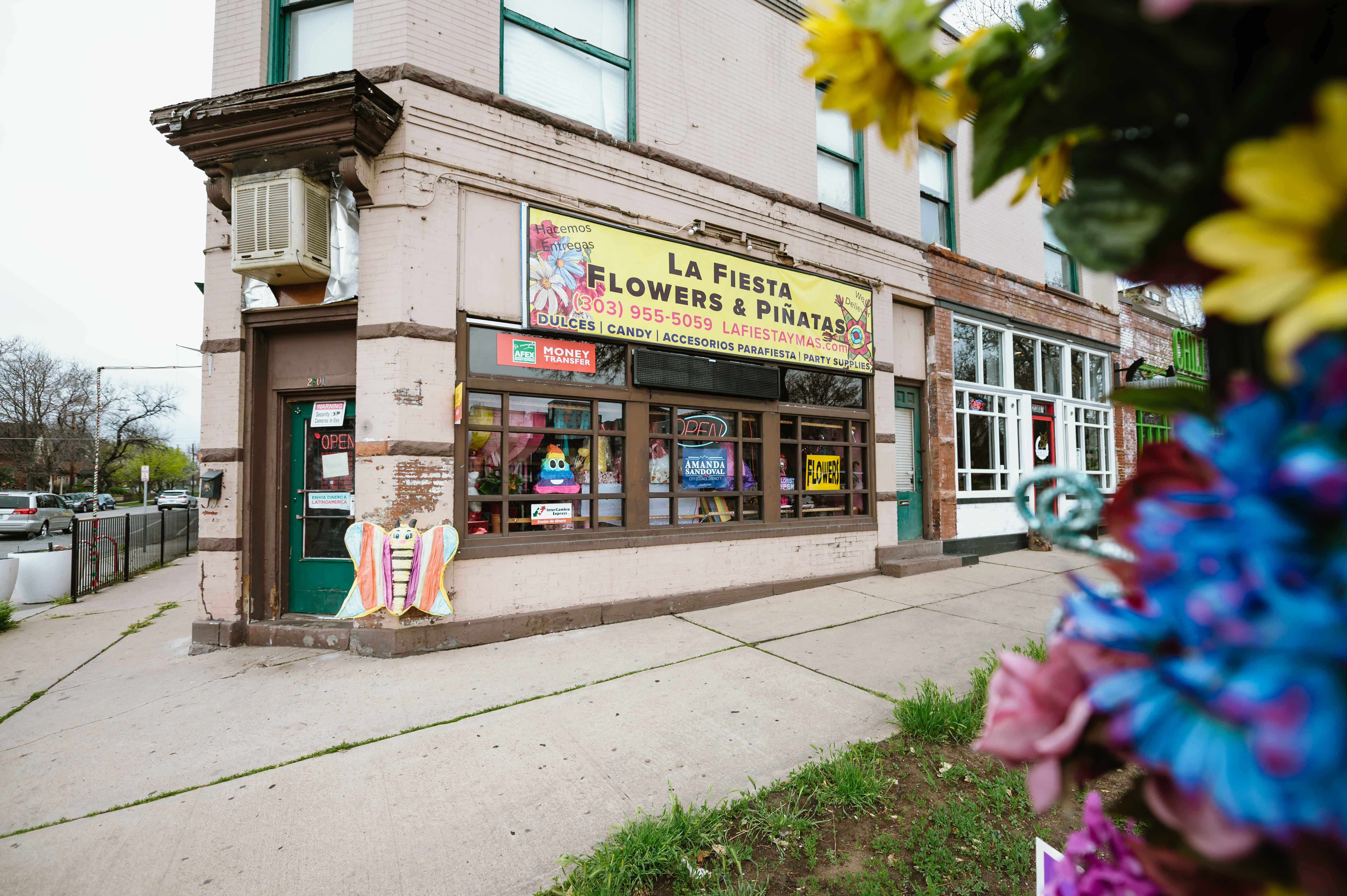 Martha’s favorite piñata is the donkey. “Not the traditional colorful one. The one from Shrek. I love the donkey! I want to take one home and put it in my room,” she said.

Both Martha and Maria said that piñatas symbolize celebration, which is why they welcome customers of all ages, nationalities and political affiliations into their store. Everyone has something to celebrate. The sisters still sell the famous Donald Trump piñatas the previous owner of La Fiesta used to have in stock, and they’ve been a big hit with customers, but Martha doesn’t think it has to be a metaphor. “People might think it’s because they [customers] don’t like him, but a lot of people come and look for the piñatas they love. Kids love a certain cartoon, so they want a piñata with that character. Some people might just want to celebrate,” Martha said.

And La Fiesta really is all about celebration. Martha and Maria want their piñateria to be fun. In addition to piñatas, the sisters sell Mexican candy, balloons, flowers and other decorations. They’re even thinking about setting up a selfie booth since customers who walk in keep trying to pose with the piñatas.

“It’s always something different. Every morning we don’t know what’s going to come through the door,” Martha said.