It all started with a Kickstarter, and of course, a dream. Founded by Wayne Watts in 2016, Dream Create Inspire, the Denver-based songwriting and artistic development workshop is hitting the road, stretching a once “could be” into a reality. With humble beginnings, Dream Create Inspire was born in public libraries, Boys & Girls Clubs and schools, drawing upon the artistic resources in the community to teach the art of songwriting and musical artistry to young adults, with the ultimate goal of bringing the community together. Watts, an artist in his own right and a champion of the public school system —he worked in Denver Public Schools as a substitute teacher and helped young adults chart their career paths — began throwing free events in the community with game nights, yoga sessions and open mic nights. The tour, however, wasn’t brought into the light until Watts found himself wanting to tour his solo musical output, but realizing he had loftier ambitions than merely a lap of self-promotion. This is where the Dream Create Inspire Tour was brought to life, which includes some of those who’d join in on his open mic nights.

“I think the great thing about songwriting is that everybody starts writing the song at the same point — where there’s no song, but the options to get there are limitless. So, it gives us a clean slate,” says Watts regarding his decision to focus on songwriting as the main point of the workshops. “[Songwriting] also provides a place for learning. We have the students start by interviewing artists, and that right there starts them with energy and the link to what the life of an artist is.” 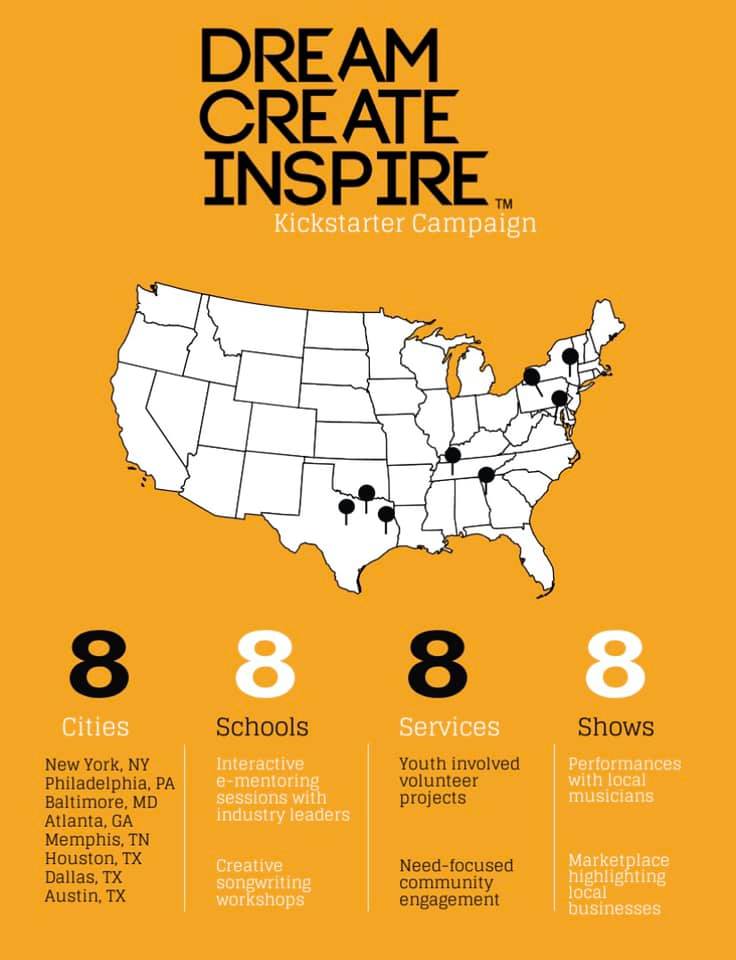 Watts doesn’t just stop at songwriters for Dream Create Inspire. Watts brings in everyone from police officers to people in the community for interviews with the eventual goal of making a soundtrack of that said person. In addition, Watts has the kids go through books to find lines in the literature that remind them of the person the students just interviewed. The complete process engages the kids far deeper than the songs themselves into prospectives and experiences different than their own — opening their horizons in the process. The ongoing tour not only features songwriting workshops but acts of service and live performances from some of the mentors as well.

The tour officially took off on Tuesday, May 7, touching down in Atlanta, and will continue on to seven more cities across the U.S. — New York City, Memphis, Philadelphia, Baltimore, Austin, Dallas, and Houston before returning to the Mile High City. While honing artistic chops are part of his mission, for the kids, ultimately, Watts wants the “light bulb to go off in their heads.” He wants the tour to be an affirmation of viability of the ideas in these kids minds, much like the embark of the tour was an affirmation of the ideas in Watts’.