If someone were to tell you there is peace to be found in the onslaught of digital media — endless Instagram feeds, constant Facebook updates, 24-hour news stories — would you believe them? Local artist Drew Austin doesn’t need to tell you because he’s created an exhibit at Understudy in downtown Denver that tries to do just that. Called Lull, Austin considers the month-long installation an “immersive reprieve from daily life” and invites viewers to lose themselves in a cave-like space that uses uninterrupted virtual media as a kind of white noise.

Surprisingly, the actual set-up of the installation is minimal — two large white projection screens which mimic the existing architecture of the Understudy space and a group of Mylar cones hanging in a corner. Visitors must walk through the front doors and around a corner, entering a smaller area that removes the view of the surrounding bustling city (at 14th and Stout — it’s pretty much always busy). A looped film plays on each screen, colored lights reflect off the cones, casting warm shadows around the room and audio of three different tracks replaces the sound of cars and people outside. At first, the beauty and complexity of what Austin has created are lost in the sensory bombardment. Which screen do you watch first? Are you hearing waves or a match striking? And oh, the colors are so nice and pretty on the walls. 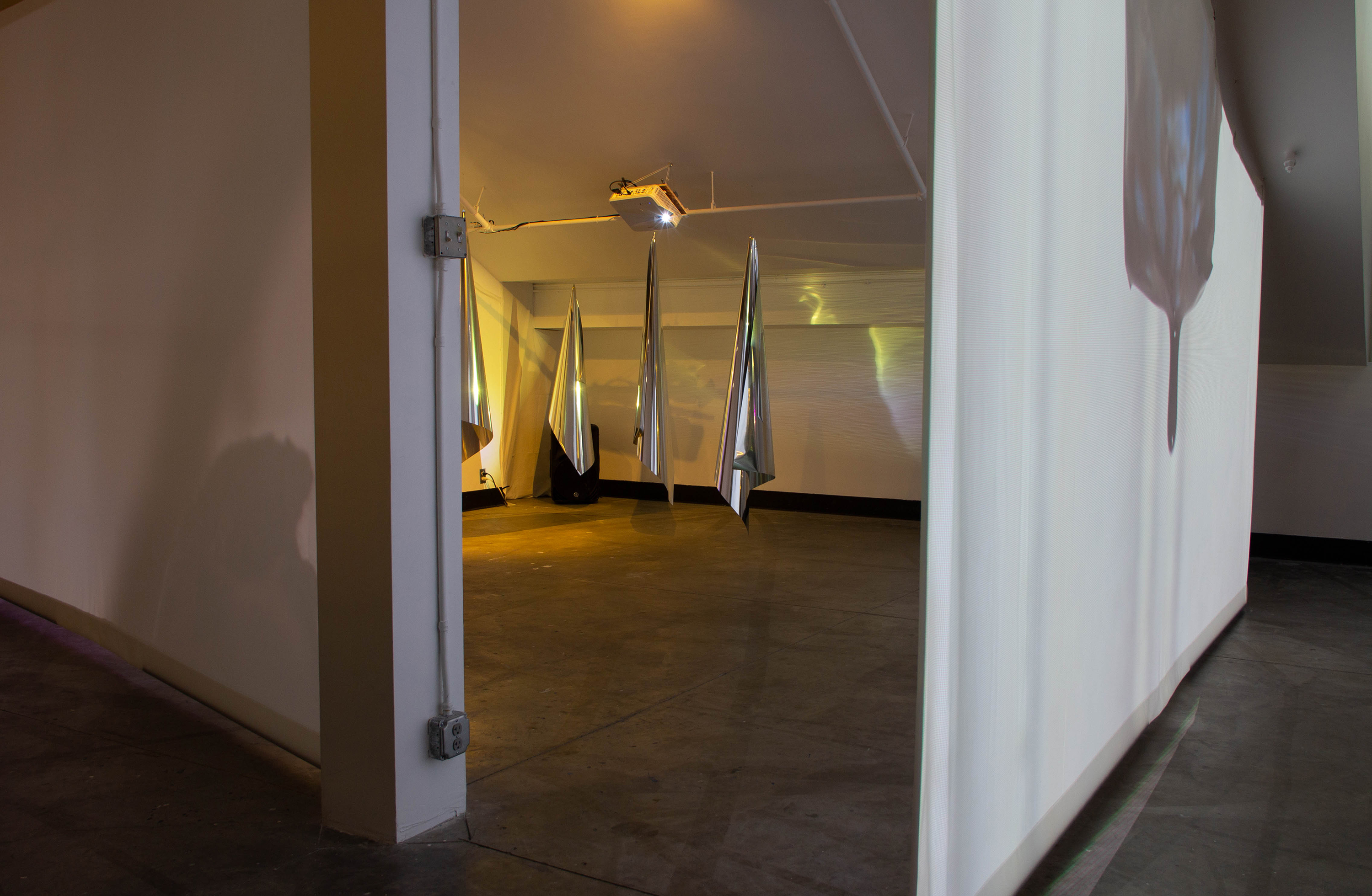 But it only takes a few moments to settle in. It soon dawns on you that it doesn’t matter what you look at or listen to and it doesn’t need to be done in any particular order. There’s a sense of relief, to just see and hear without needing meaning or instruction. “People feel really stressed because we want to be stressed all the time. We have all these screens because we want to be sucked into them. When I want to calm down, I go to Instagram and I’m looking for peace there,” Austin remarked.

The two large videos projected onto the screens are a single video that work in tandem, synced but not synchronized. There are several clips, including a paintbrush laying paint on a surface, a match burning, bubbles, and these are all things Austin finds in nature, in his studio and in his daily life. Everything was filmed using a macro lens, which makes it difficult to make sense of some of the images, but that is intentional so that viewers cannot focus on any one thing with too much depth. The audio tracks are from three separate sources — one is the sound from each video clip, one is the sound of the overall surroundings when the video clip was being filmed and the third is a recording of a beach with waves. 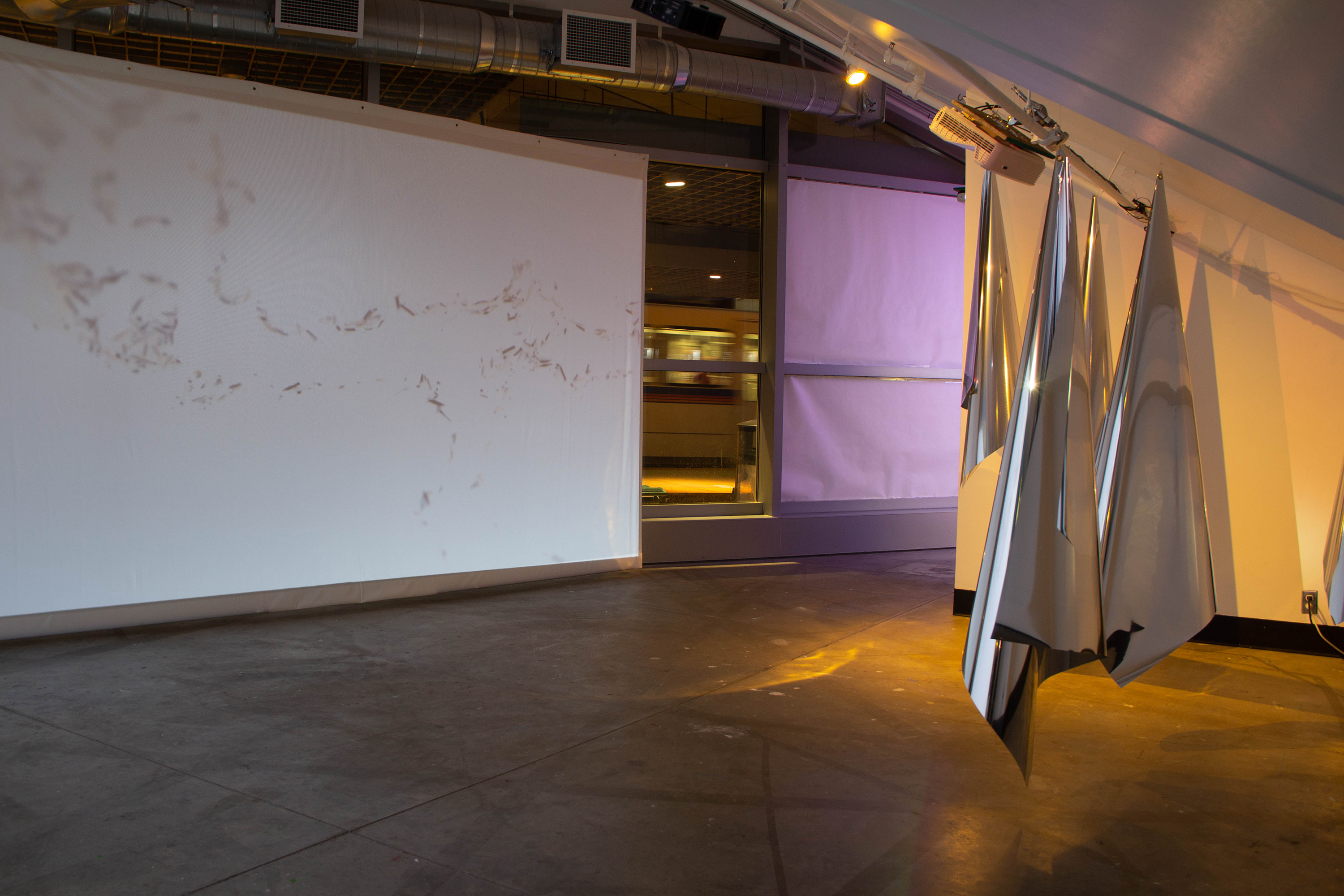 Everything comes alive in Lull at night — and unlike other Understudy exhibits, it will only be open from 7 to 10 p.m. because the images on the screens are best seen when it’s dark outside. Even if that was a technical decision — Austin noted it became a nightmare to try to black out the space during daytime hours — the timing enhances the idea that it’s a respite from our information-driven lives. Between those hours, we are often spending time in front of screens by choice, instead of for work. So the question of Lull is why do we deny the distraction of technology as an avenue for contentment?

“Something I don’t necessarily talk about in the work is that I think some of that same overwhelm we feel in the tech world can be found in the natural world. You go into nature and feel, see and hear a lot of things at once but it’s a peaceful lull, whereas the urban onslaught is overwhelming… I think it’s interesting, that division between the manmade world and the natural world,” commented Austin. By doing this, Austin has approached the whole “problem” of our addiction to screens in an optimistic way. Instead of fighting the current, why not float with it?

Understudy is located at 890 C 14th Street (beneath the stairs by the Convention Center). Lull will be on view until the end of April, open Monday, Wednesday, Friday, Saturday and Sunday.

New Genres Collective will have a special performance on April 13 from 8 to 10 p.m. inside Lull, which will use other footage and props from members of the collective (which Austin is also a member of) to share their own experience of the digital age.

All photography courtesy of Drew Austin