As a child, the possibilities of LEGO bricks were boundless. Most of us, as we grew up, disposed of or gave away our crates of little plastic building blocks, never to snap two together again. But Nathan Sawaya, after starting a career as an attorney in Hollywood, left the life of a lawyer to become a full-time LEGO artist. He now operates two working art studios and has work represented in collections all over the world. His “brick art” creations include an Oscar statuette that was part of the live broadcast of the 2015 Oscars, a sculpture featured in a Lady Gaga music video, the iconic torso with bricks falling out of its stomach and a life-size version of Han Solo frozen in carbonite — all made entirely of LEGO bricks. 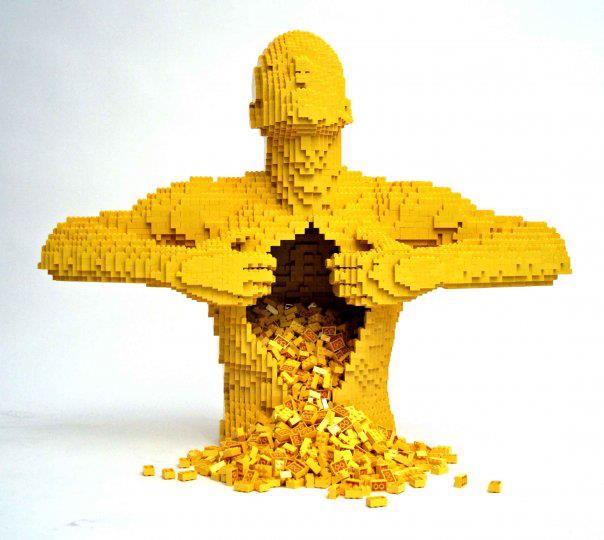 This summer, six of his LEGO sculptures will be installed at the Republic Plaza on 16th Street Mall in downtown Denver. Called Park People, these monochromatic brick sculptures invite passers-by to interact with them between July 10 and August 27. “The viewer is encouraged to sit with the art, to feel it and even converse with it,” Sawaya said. “These life-size figures are there to keep people company. They are there to brighten a family portrait. Or, just be a new friend for social media. They are there to be a confidant, and, they will never reveal any secrets.” 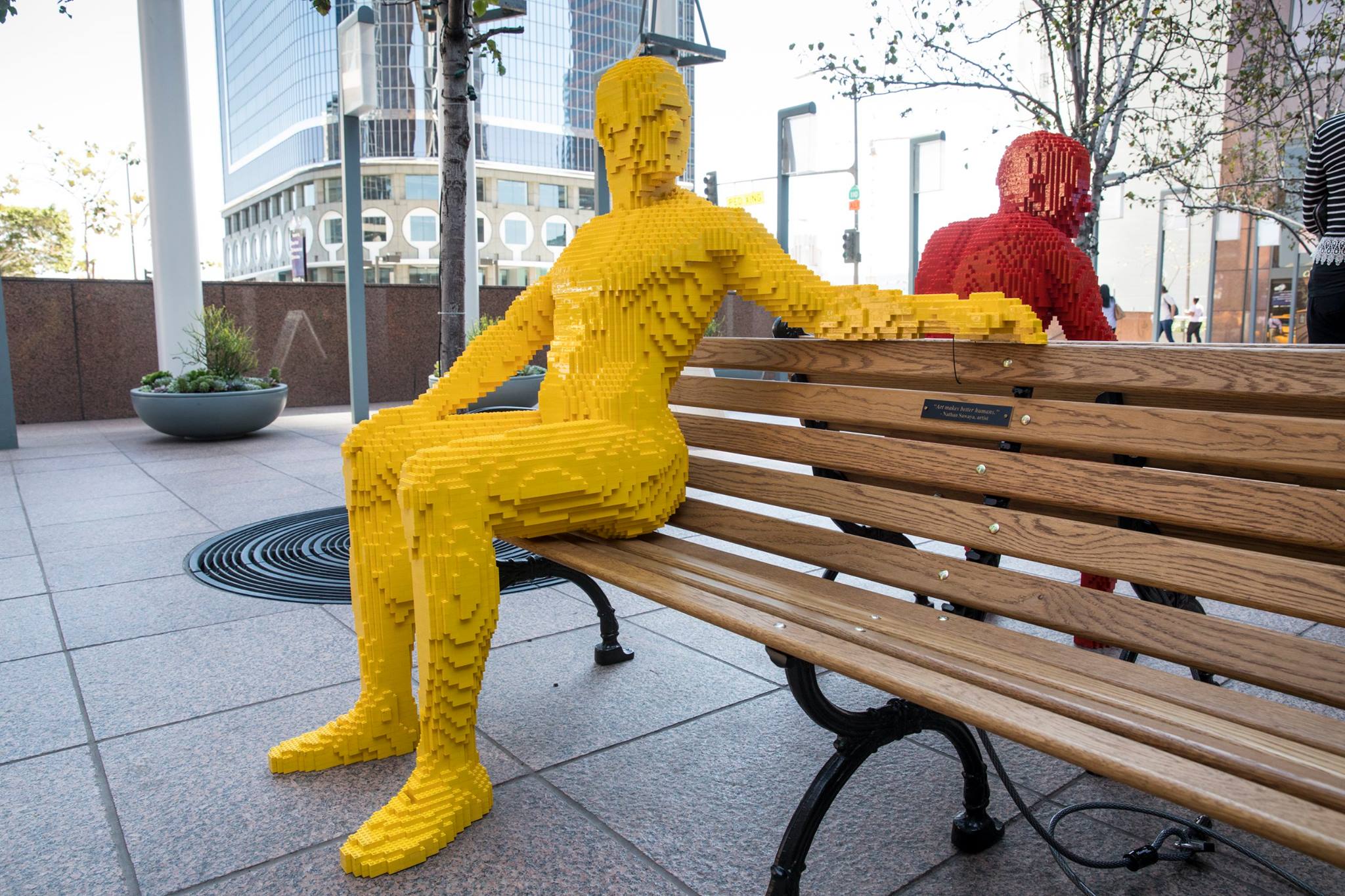 Sawaya’s exacting representation of the human form through the use of square and rectangle bricks has excited people in the art world as well as on the streets for over a decade. The three-dimensional sculptures feel digital, like pixelated anomalies, especially against the backdrop of a city. Since the Park People sculptures sit on benches with enough room for others to take a seat, it is nearly impossible not to interact with them if you choose to sit down. Their postures are natural, even easy-going, and it’s with that blurring of the boundaries between real and fake that Sawaya’s LEGO art really shines.

Though the medium for these sculptures is considered a child’s toy to most, the passion behind adult LEGO entrepreneurs is so great that the company created the LEGO Certified Professionals (LCP) program to honor and cultivate them. LCPs usually work with a LEGO office as well as third-party commissions to produce an installation or exhibition. Sawaya is the first person in the world to achieve the standing as an LCP and as a LEGO Master Builder. According to the LEGO website, he currently has 2.5 million bricks at his “immediate disposal to craft large-scale sculptures for collectors, galleries and companies.” 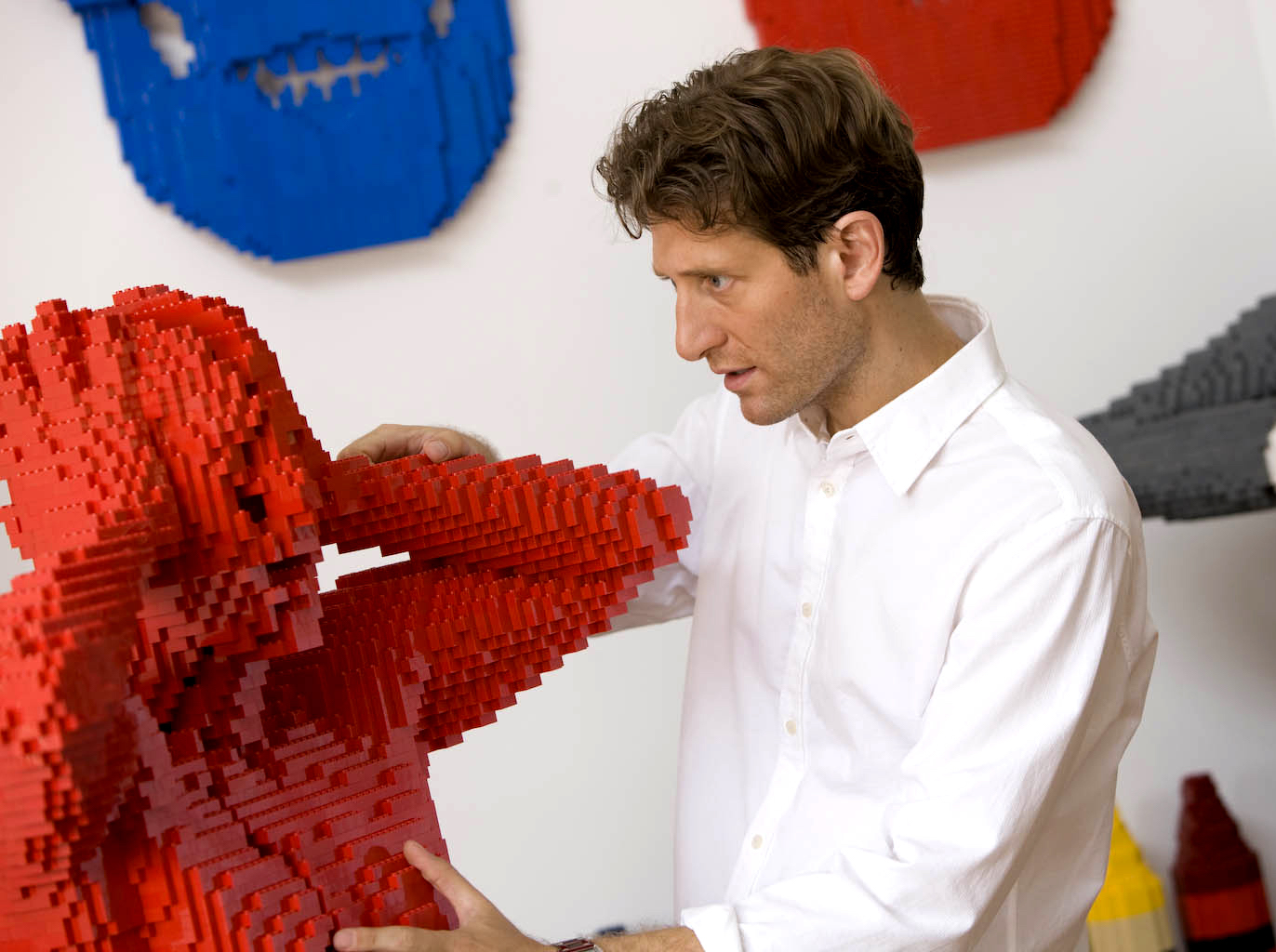 Nathan Sawaya working in the studio

Park People has traveled in various places across the US, including Las Vegas and San Diego, before heading to Denver. That’s normal for Sawaya’s work, which is popular all over the world with people of all ages. His touring exhibition The Art of the Brick is the only one of its kind to exclusively use LEGO brick as a medium, elevating Sawaya from someone who is passionate about LEGO to someone who uses LEGO as an extension of himself.

All photography courtesy of Arts Brookfield, unless otherwise noted.