For some artists, music is in the blood. At least that’s the case for indie-pop artist UPSAHL. Born into a musical family, she was lucky enough to grow up with a band room in her house — courtesy of her father who spent plenty of time making music on the road with various bands. She learned to play piano and guitar at just five years old, and the rest is history. 15 years later she’s played at festivals alongside big names like The Shins and Beck. She recently relocated to Los Angeles from her hometown of Phoenix, AZ, and now she’s hitting the road with Max Frost. They’ll be making one Mile High City stop on their tour on March 9, just one day after UPSAHL releases her new album. Before she takes the stage in Denver this weekend, we got a chance to talk with the young artist about breaking into the music scene and staying away from fake people

303 Magazine: I’ve read that you started playing music when you were very young, for those who are unfamiliar with your music can you talk a little bit about how your music career got started?

UPSAHL: Getting into music happened very naturally for me, and I never felt like I made a conscious decision to pursue it. It was always just what I did. My dad was a musician, so I grew up hanging out with a bunch of punk rock bands, having jam sessions in my living room, and writing my own songs in my room. When I was in high school, I started releasing albums and playing a bunch of shows around Phoenix. Music was really the only thing that I genuinely was obsessed with throughout my childhood, and by the time I graduated, I met my amazing management and moved to LA as soon as I could to do music full time.

303: You’re still young, do you find that your age presents any challenges or gives you any advantages within the industry?

UPSAHL: I would definitely say that my age has had an impact on how I’ve carried myself as an artist and a songwriter. At first, it stressed me out because I felt like I was never going to be taken seriously being young, especially being a young girl. But then I sort of took it as a positive challenge and just worked my ass off in and out of the studio to give people no option other than to take me seriously. So I guess in any industry, you can let your age weigh you down, or you can use it to your advantage and prove to people that you are not someone who fucks around. 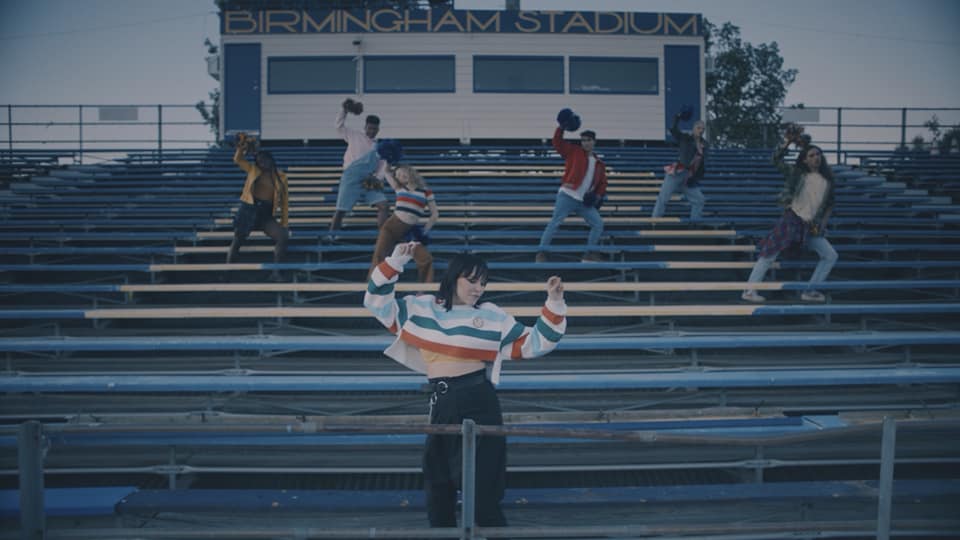 303: Between your family, your record label and the Phoenix music scene, you’ve had a lot of support in your career.  Does anything stand out as being a particularly noteworthy part of your success behind the scenes?

UPSAHL: This past year has been the best year of my life so far, and every little thing that I am experiencing in the music industry is pretty much a first for me, so I get excited about the smallest things. A lot of my work this year has been behind the scenes while making music, but I had a little “a-hah” moment during one of my first meetings with Arista. I was meeting part of the Sony LA team that would be working on my project, and about twenty people just sat around a conference table while I got to play them demos from the music that I had been working on for the first half of 2018. I just remember sitting down at that table while we were listening to one of the first demos of “Drugs,” and everyone was kind of nodding their heads to the beat. I started thinking to myself, “If year-ago me could see all these people from Sony gathered around a table listening to my music right now, she would lose her shit.” To me, it’s all in the little things. As a developing artist, the biggest thing I’ve learned is to compare my current self to my past self, not to other people, and it has made what I do way more exciting.

303: In previous interviews you’ve mentioned moving to LA from Phoenix being an adjustment, can you talk more about that?

UPSAHL: Moving to LA was just a giant slap to the face. I finally realized what it felt like to be surrounded by a bunch of people and energy, but still feel so alone. I was just waking up, going to the studio, going home to sleep, and then doing it all again the next day. I kinda started to go crazy for a minute, but then I finally realized that being alone doesn’t mean you have to be lonely. I started to embrace my independence and learned how to be comfortable with my own company. I feel like once I got to that point mentally, my ideas for my music got better as well.

303: You recently released your latest single “Drugs.” Can you tell me more about the deeper meaning behind the lyrics?

UPSAHL: “Drugs” is about dealing with fake ass people at parties. I feel like so many people get caught up in the hype of social media, the newest Gucci belt, or the hottest new car, and everyone is always flexing on their cool materialistic shit. This song is basically a diss on all those people.

303: Your lyrics tend to cover relatable topics with an underlying sense of humor.  Can you tell me about what inspires your lyric writing?

UPSAHL: My goal as a writer and as an artist is for people to listen to my songs and be able to feel like they see a part of them in that song or relate to it in some way. In most of the sessions for the songs on the EP, each line of the song was just curated from going back and forth with lyrics in the studio, almost as if we were having a conversation. I think that the conversational nature of the lyrics is what makes it so relatable, sometimes bitchy, and a little funny.

303: In the past, you’ve played at festivals alongside big artists like Beck and Flume, can you tell me a little bit about what those experiences have been like for you?

UPSAHL: There is no way I would have ever gotten to play those festivals with such dope artists if it wasn’t for the support of the Phoenix music scene. It’s a pretty surreal feeling getting off stage at a festival like that and then watching one of your favorite artists like Beck play on that stage after you. Just thinking back on those festivals makes me so excited to start touring and hopefully play some more festivals this year!

303: You’re touring with Max Frost, can you tell me how that came to be?

UPSAHL: I met Max a couple of years ago when we had a writing session. We ended up writing “Can You Hear Me Now” during that session, which I ended up releasing as my first proper single. He’s definitely become a mentor for me, and I’ve really learned a lot from him just by watching his songwriting process and seeing the behind the scenes of his art project. So stoked about getting to tour with him!

303: Are you working on anything now that you’re excited about?

UPSAHL: YES. I’m about to release my first EP on March 8! And I’m already making plans for the next one.

303: What are some of your goals for the future?

UPSAHL: I want to just fucking takeover the music scene. Haha! Right now, my short term goals are to just make the live show as rad as possible and to keep creating better songs.

UPSAHL will be playing with Max Frost at The Marquis on March 9. Tickets are available here.  You keep up with UPSAHL’s tour news by following her on Twitter.