Deep Cuts – Skip The Funkologist, Bring On The Funk

This is the first story of the ongoing series Deep Cuts, which highlights a local DJ here in Denver every month. The series includes a profile on important underground DJs around Denver as well as a playlist of five of their current favorite tracks.

A towering figure stood in the doorway of KGNU’s radio booth, bright blue walls reflecting on the back of his t-shirt. Skip Reeves had a soft demeanor that clashed with his tall build, ducking slightly as he walked back into the booth.

“I’ve been in radio for about 13 years now,” Reeves’ deep voice boomed while starting up the station’s computer. “Since 2006,” he began queuing up the tracks for this week’s show. Reeves is one of the hosts of the KGNU show Dusty Grooves, which takes place every first Friday night from 9 – 11 p.m. He also hosts the show Sleepless Nights on the fourth Thursday of each month on KGNU. 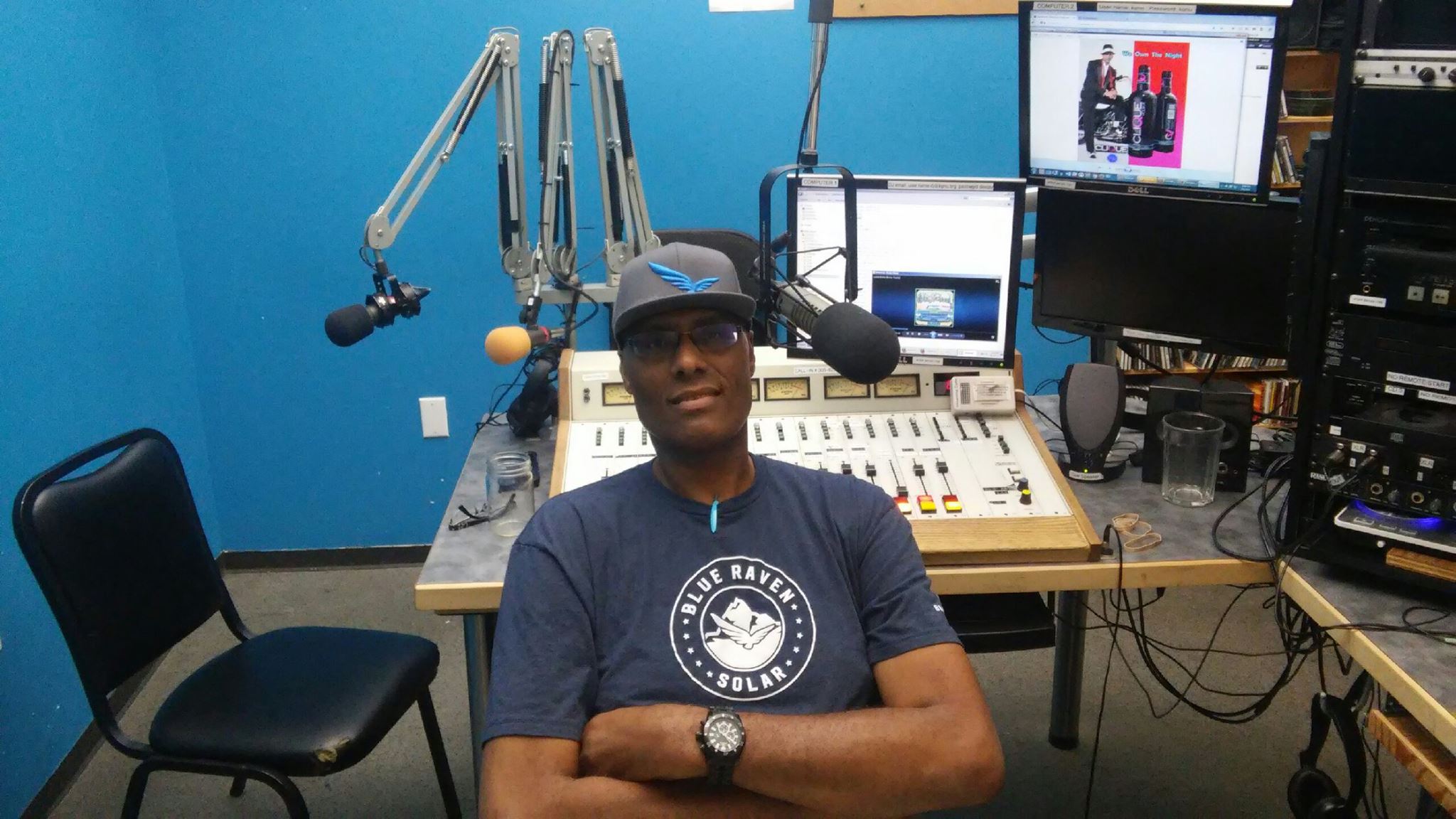 Skip in the booth. Courtesy of Skip Reeves’ Facebook

However, Reeves’ main radio project takes place across multiple platforms — hosted by KGNU as well as online radio stations like Sparkx Radio and KYBN. Touted as, “the funkiest show on radio,” Reeves’ main radio show, A Funk Above the Rest, takes place every Saturday night from 9 – 11 p.m. on KGNU. After being recorded on the airwaves, the show is syndicated on KYBN on Tuesdays and Saturdays, WJHM on Sundays and streamed live during the recording on Sparkx.

Reeves got his start in radio in an unlikely place. “Weirdly enough, I started with Radio Disney,” Reeves chuckled, shaking his head. Reeves was living in Germany for several years before moving to Denver about six years ago. He wasted no time getting involved with KGNU, pitching them one show idea — which quickly grew to three.

His music collection is vast and prolific, with tens of thousands of funk tracks. “In my 13 years as a radio host, I don’t think I’ve ever repeated a song. At least, I try my absolute hardest to avoid [repetition],” Reeves said over the funky beat of McFadden and Whitehead’s “Ain’t No Stopping Us Now.”

A Funk Above the Rest is the only radio show in the US sponsored by the record label Funky Town Grooves, a funk label based in London. Reeves also released a compilation of funk tracks with The After After Party, and he hosts weekly food giveaways on his radio show. Most notably, Reeves is sponsored by Juno, the online vinyl and music retail company, who send him hundreds of funk tracks every week—which might explain how he’s been able to avoid repeating any tracks on his many shows.

“‘Forge your own path,’ my father used to tell me all the time growing up.” Reeves’ father served in the military, meaning Reeves moved around often throughout his childhood. He attributes his easy-going and adventurous attitude to the frequent moves. “I loved exploring new places, meeting new people… just exploring a new place.” Reeves and his wife volunteer with a deaf congregation, and Reeves picked up American Sign Language for the sole reason of being able to interact with more people. His sociable nature and charisma channel into the hours of funk music his show brings Denver and beyond. Reeves is a one-of-a-kind DJ and person and Denver is lucky enough to be home to his passion-fueled shows.

You can listen to Skip’s many shows on KGNU Boulder/Denver 88.5 FM / 1390 AM. If you are a musician and would like to pass your music along to Skip, go here.