First dates can be extremely awkward. And if you’ve ever used dating apps like Tinder, Bumble or Hinge, selecting the perfect ambiance to ask your date about their hometown and what type of dog they have is enough to cause both introverts and extroverts alike to rip their hair out. Nobody likes a bad first impression, and if you choose a bar that’s too loud or a coffee shop so quiet you can hear a pin drop, you might as well just cancel right now.

Bumble, the location-based social and dating app, seems to understand the problem. If you’re unfamiliar with it, Bumble lets women make the first move if you’re looking to date, and also features other platforms called Bumble BFF and Bumble Bizz, where you can match with friends or network with like-minded professionals.

The app, which launched only four years ago in 2014, has been successful, but last week Bumble decided to dial it back and encourage app users to meet their matches in person with the creation of the first official “BumbleSpot” in Denver. The spot is a social hangout spot sponsored by Bumble, that allows app users to play games, score drink deals and more while they mingle. 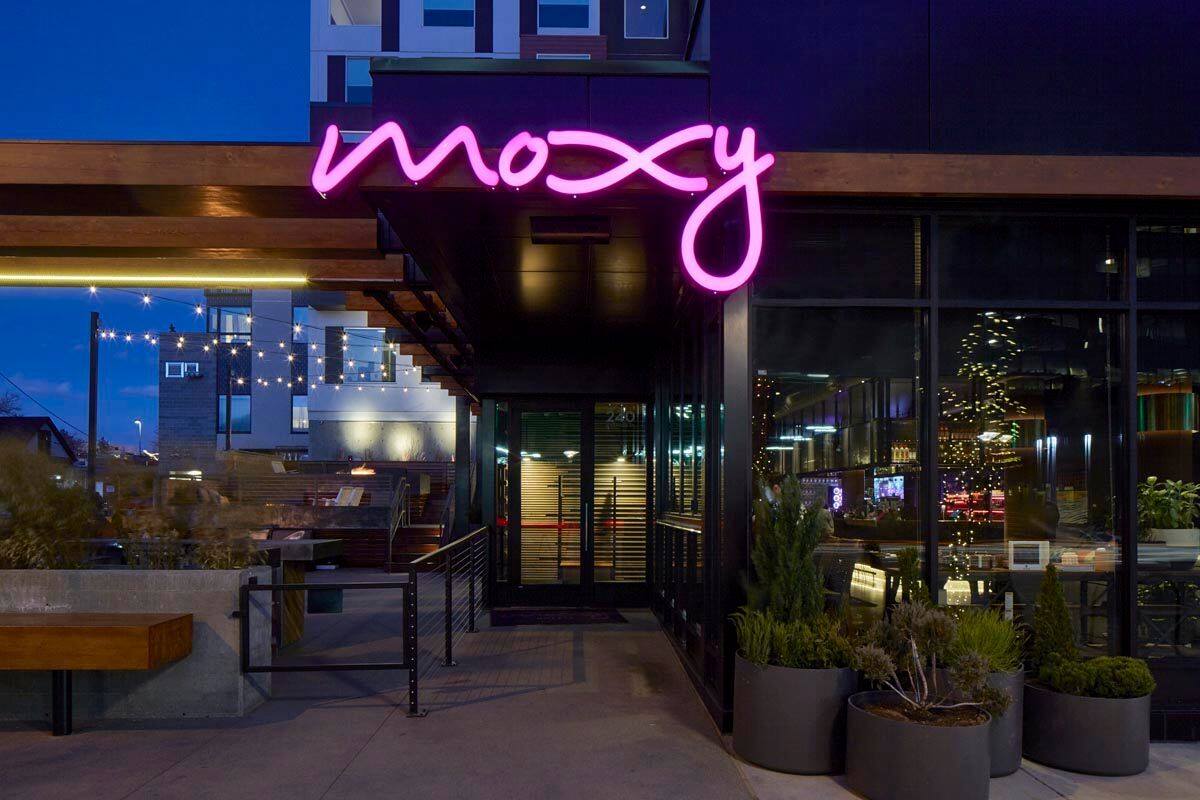 The first official BumbleSpot in the Mile High City is at the Moxy Hotel in Cherry Creek, Marriott International’s experimental hotel brand geared towards millennials. Moxy Hotels across the US have begun cropping up BumbleSpots in major cities, and according to Andee Olson, Director of Partnership with Bumble, the collaboration with Moxy has been in the works for a while.

“[At Bumble,] We are always looking for ways to bring the digital connections that we make on the app into the real world. Our users are always asking us, ‘What’s the best date spot in my city? Or ‘Where should I go for coffee that’s not too loud?’ So we took a step back and asked what if we could create a program that highlights some of our favorite local coffee shops, bars and restaurants in all the cities where we have ambassadors?” Olson said.

“Moxy was the obvious partner. All of their locations are way more than a hotel. [It’s] A destination that you would want to go to that’s cool and fun and unique and exciting.” 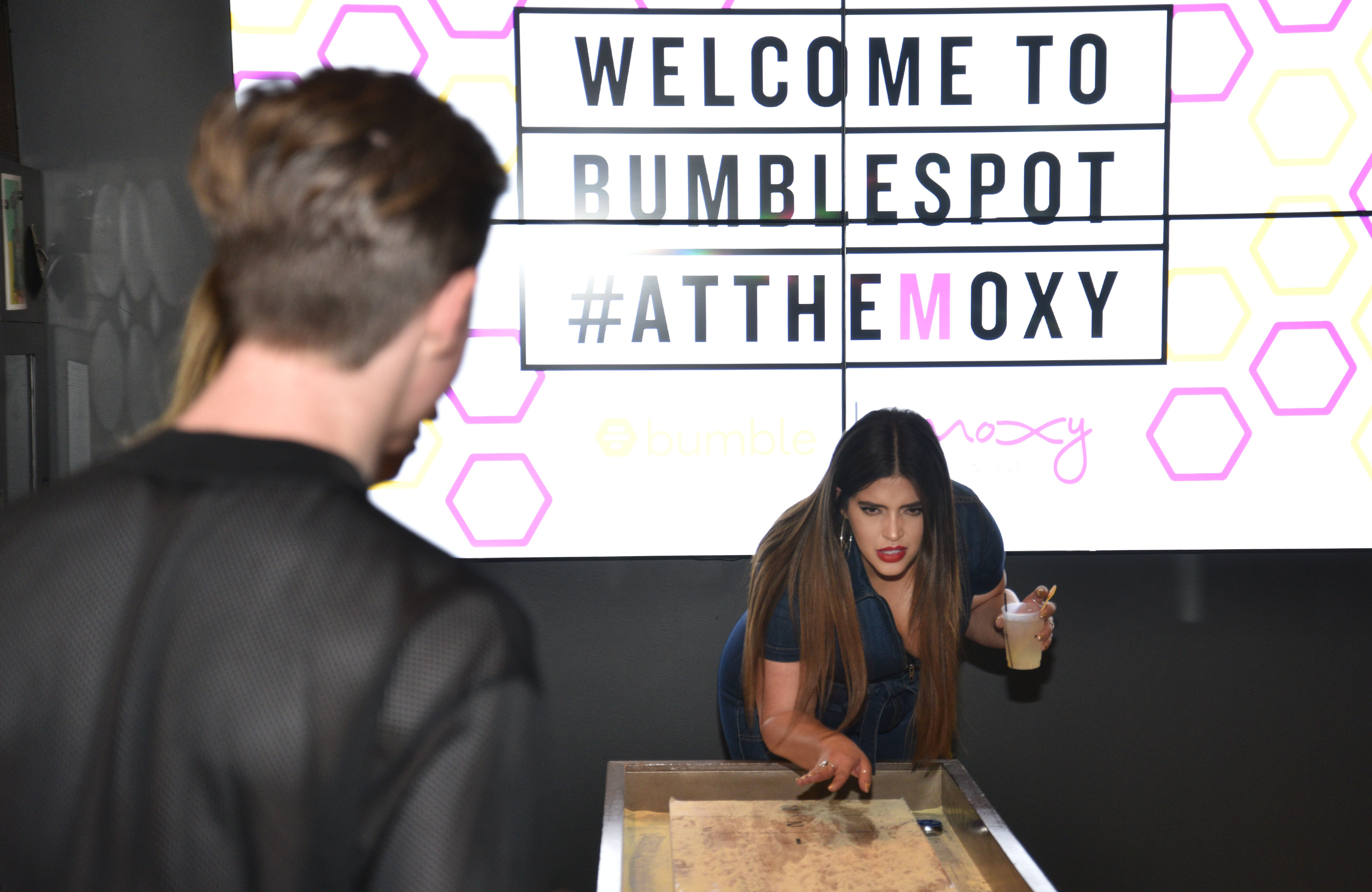 Denise Bidot plays a game at the BumbleSpot at Moxy Denver Cherry Creek. Photo by Tom Cooper/Getty Images for Bumble.

The Moxy Hotel in Cherry Creek is definitely designed with quirky character in mind. With an artsy, modern interior boasting a shuffleboard table, full bar, comfy, mid-century lounging chairs and more, this hotel doesn’t look like your traditional lobby.

“We design our spaces to be interactive, create community and encourage play. Play is one of those things where it’s scientifically proven that if you play with somebody for an hour, you’re going to learn more about them than if you email them or talk on an app for a month. So we have games throughout our spaces. We actually created a custom Bumble and Moxy Jenga set for all the BumbleSpots, so every cube you pull out has a question on it to encourage getting to know each other,” Donnan said.

What’s unusual, is the hotel staff at Moxy too is trained to guide you through an awkward date.

“Our crew at Moxy is trained by Upright Citizens Brigade (UCB), an incredible [comedy] theater troupe, so that means if you come to Moxy, expect that the people that work there can help you if the conversation goes stale. They are trained in improv, which is really unusual for the hospitality industry,” Donnan said.

In addition to playing a variety of fun icebreaker games, Bumble users who visit the BumbleSpot at the Moxy in Cherry Creek also get perks just for coming in and showing the staff the app on their phone.

A menu of two-for-one specialty cocktails with Bumble-themed names such as “Stinger” and “Queen Bee” are available for BumbleSpot guests as well as food discounts. Bumble Bizz users can also use the hotel’s quiet workspaces complimentary if they wish to network in private. 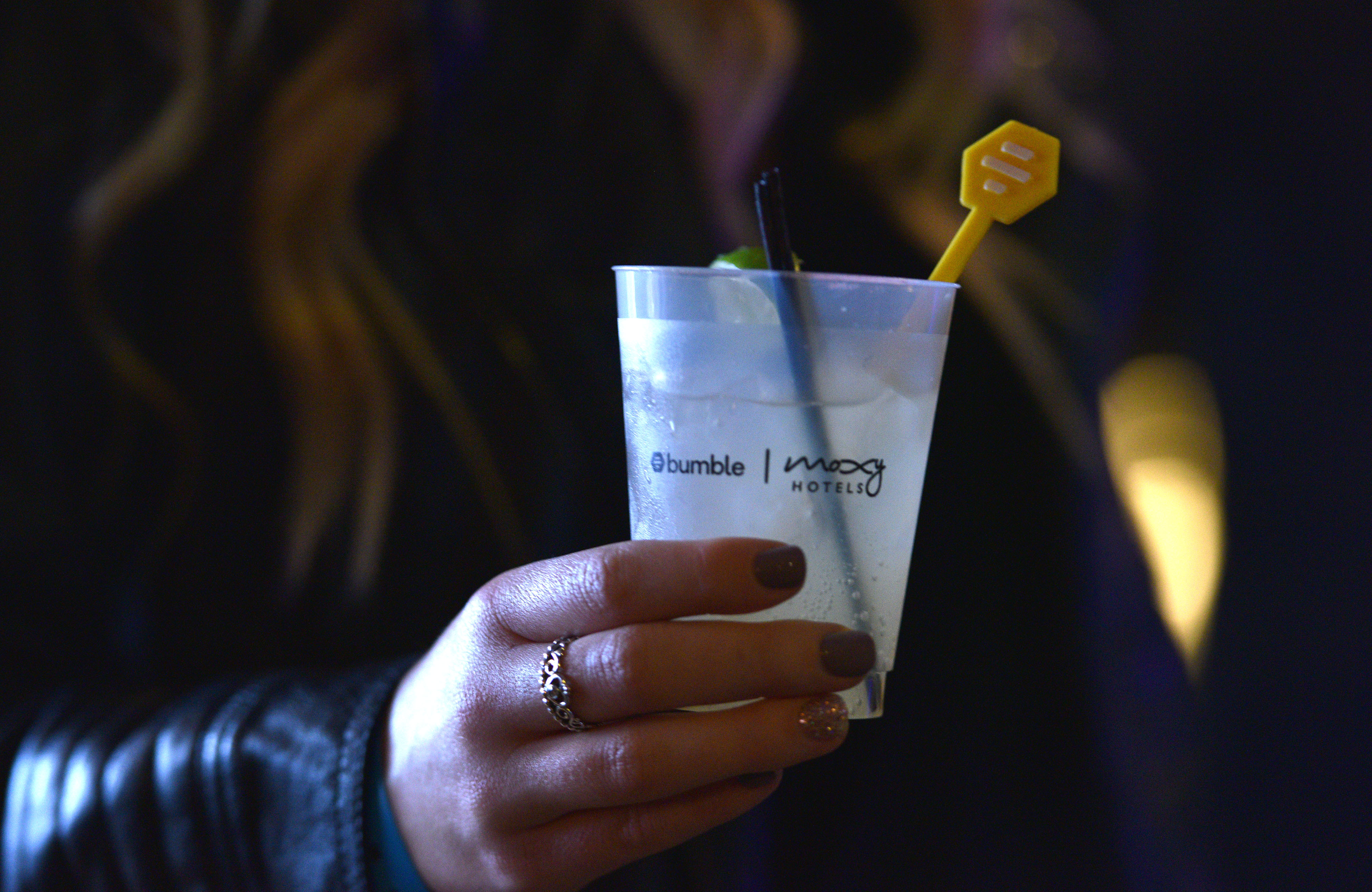 Cocktails at the BumbleSpot. Photo by Tom Cooper/Getty Images for Bumble.

However, there are no discounts on a night’s stay at the Moxy. Olson says the reason for this is because Bumble is encouraging the hotel’s use as a public space. “We wanted to keep it more focused on building your relationship,” Olson said.

Another notable perk of BumbleSpots popping up in Denver, as well as other locations in the US and Canada, is safety. Olson says that Bumble has received thousands of requests from restaurants, bars and other hangouts to become an approved BumbleSpot, but they only select those they feel understand the app’s values of respect. They also train hotel staff to help buffer awkwardness and place signs in bathrooms with tips on how to leave or handle an uncomfortable situation.

“We hope that anyone meeting someone on Bumble is adhering to Bumble’s values of kindness, respect, equality, empowerment and accountability. And if they’re not, and we know about it, we obviously remove their account from the platform the second we hear about it and there are no second chances,” Olson said.

“There’s no guarantee that any situation is going to be safe. We hope it is and we will do our best to make sure that it is, but this is a big step in the right direction.” 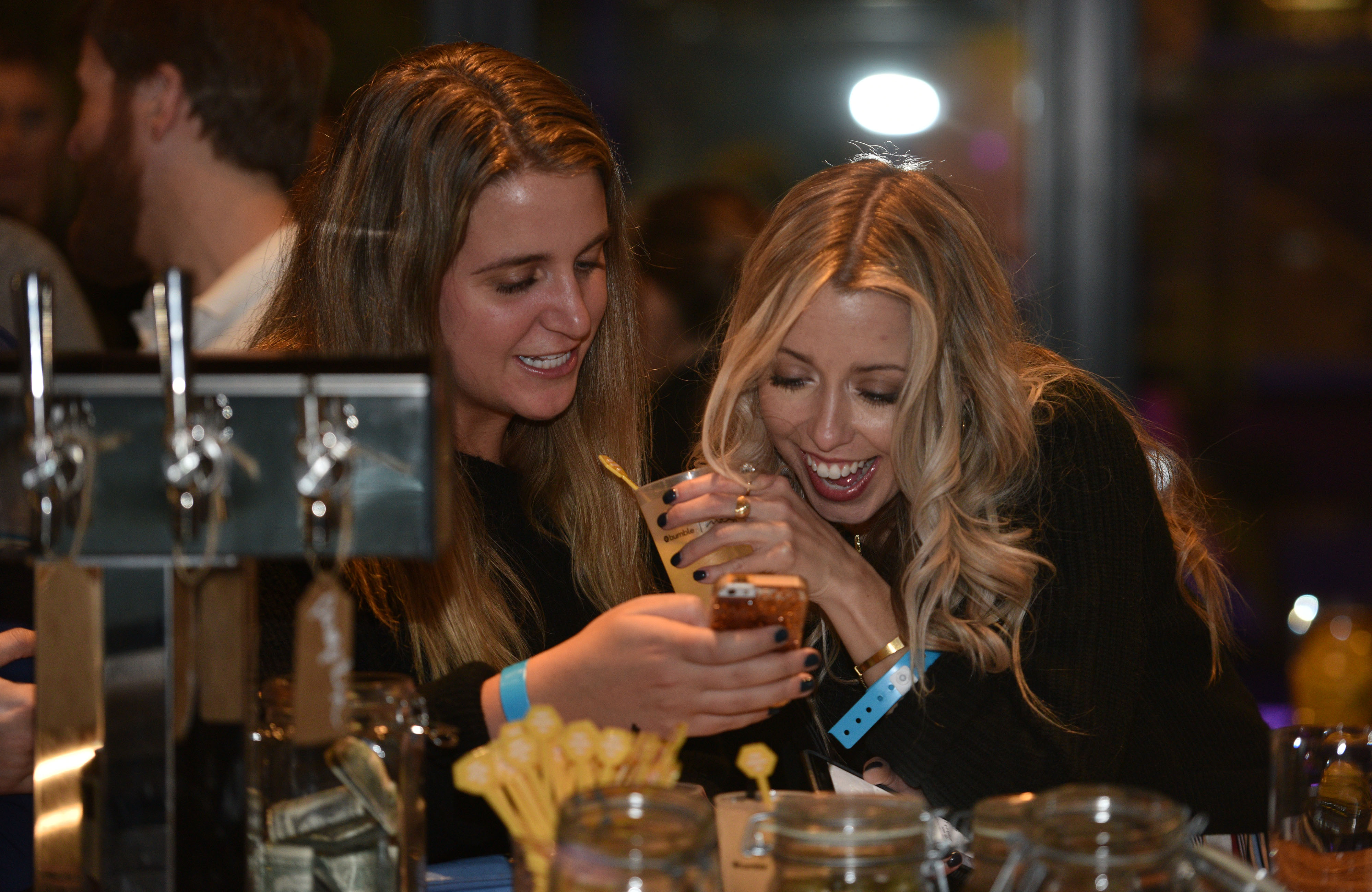 Guests at the BumbleSpot. Photo by Tom Cooper/Getty Images for Bumble.

Dating is a lot of pressure. Olson wants people to know that the game has changed a lot, and Bumble recognizes that. We asked her if she thinks it’s harder to form relationships in today’s modern world and she said it is, but not because it’s impossible — but because people are looking for more meaningful connections.

“With Bumble, you’re broadening your horizons to people that you would never get an opportunity to meet whether that is from a town next door or an entirely different friend group or age or race or whatever that might be that you never experience. I think that people are meeting later and starting to commit later. They want to make sure they’re finding the right person,” Olson said.

And what’s the best advice for creating a lasting relationship?

“As long as you’re yourself, you’re going to get the best connections out of that. You might not get a million matches, but you’ll get quality ones. You get out of it what you put into it,” Olson said. “Put yourself out there because why not?”

The Moxy is located at 240 Josephine St., Denver