After 38 years of breakneck tempos, venue bans and a herniated disc, “Cyco” Mike Muir shows no sign of slowing down. Suicidal Tendencies, one of Muir’s many musical projects, boasts an impressive if not downright intimidating discography of crossover thrash, a hybrid of thrash metal and hardcore punk, that spans across decades.

Fat droplets rained down on the ever-present pack of cigarette smokers hanging outside of Summit Music Hall. The chilly October evening, however, couldn’t dampen the spirits of excited fans queuing up in a line that wrapped around the venue.

“Suicidal Tendencies was my first ever punk show,” said one fan named Lorenzo Chacon. “It was at Rainbow Music Hall,” a now-shuttered venue iconic during its time. “My brother took me. I was 14-years-old and weighed maybe 125 pounds, but it was one of the best nights of my life. Ever since I’ve been a fan,” Chacon, a Denver native in his early 40s, said with a laugh.

Inside, the venue was packed — not simply snug, but positively overflowing with bodies. The crowd, almost entirely dressed in black, was plugged in a cold blue light emanating from the stage. Hailing from New York City, opener Madball took the stage and delivered a rousing performance. “I don’t want to see anyone just fucking standing around,” bellowed vocalist Freddy Cricien, and the audience responded with an enthusiastic mosh pit. Madball ended their intense set by introducing the band members’ young children to the audience, who were greeted with a roar of applause and even some cooing.

Between sets, security guards fed thirsty fans sips of bottled water, pouring the water into their mouths in another brief moment of tenderness rarely seen at punk shows. Suicidal Tendencies bassist Ra Díaz entered the stage first, outfitted in a basketball jersey emblazoned with the band’s name. One by one, the rest of the band filed out to nearly deafening cheers from the crowd. Without wasting any time, the band dove right into their set with “Cyco Vision,” off their 1999 album, Freedumb. By the end of the band’s third song, “F.U.B.A.R,” security had caught two crowd surfers as they were carried up to the foot of the stage.

Pleasants and Diaz fired back and forth with a frenzied energy as Muir hopped around the stage and shouted his lyrics, donning his trademark bandana. The musicians all played off each other with a masterful control, smoothly launching into one song after another with little to no time wasted in between each song. In fact, the only lull occurred nearly an hour-and-a-half into the set, when Pleasants swapped out his guitar for a differently tuned one. Muir filled the pause in music by posing questions to the audience. “Do you guys like to sing?” Muir asked the crowd between songs. “I can’t fucking sing but that never stopped me,” screamed Muir before launching into a slightly more thrashy version “I Saw Your Mommy.” 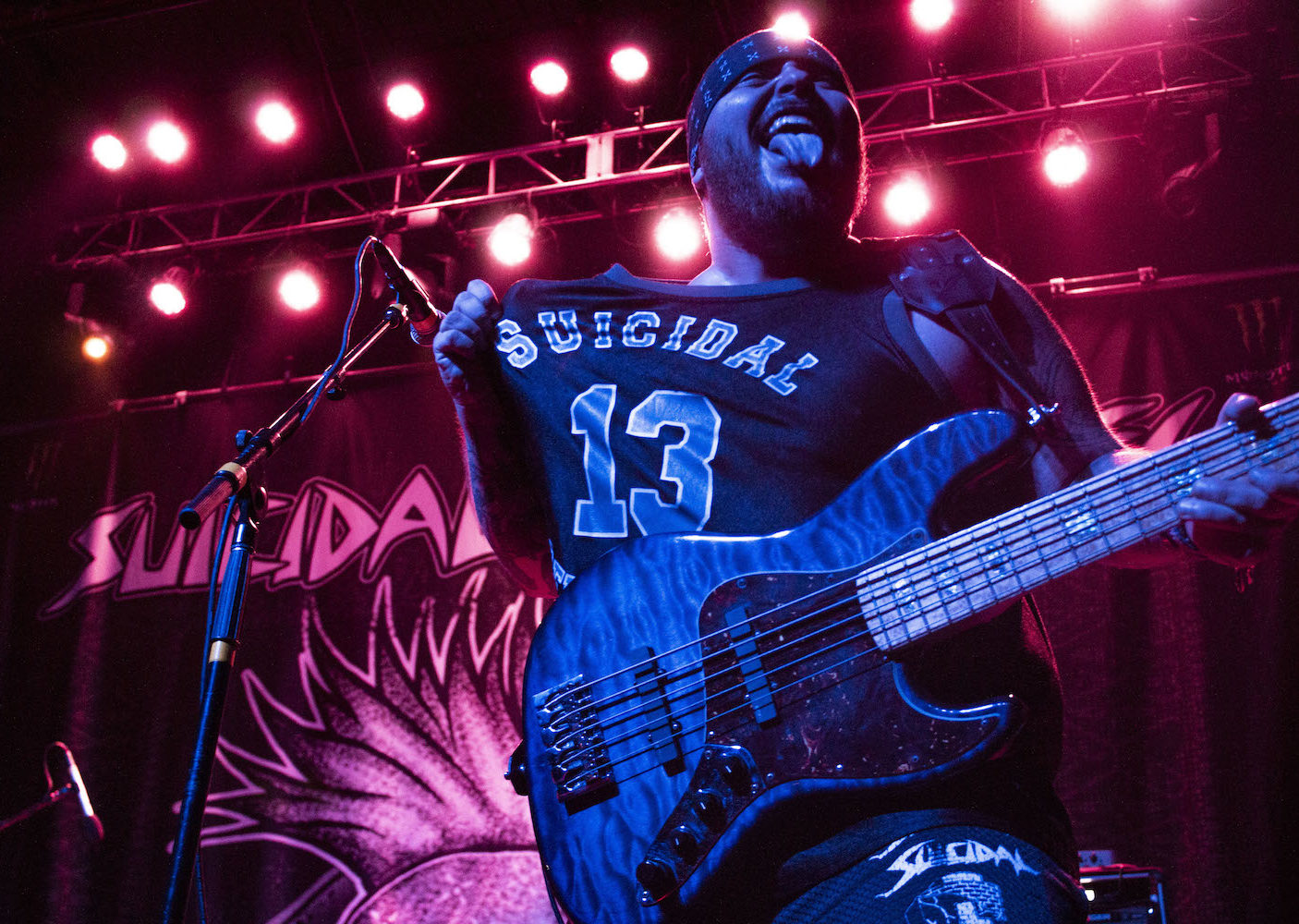 The band played nearly every song fast and hard. They maintained a steadily high energy all throughout the show, reigned in at times perhaps in an attempt to challenge their reputation as a band that gets a little too wild from time to time. At one point, two young fans were pulled onto stage. Dressed in skinny jeans and baggy hoodies, the tweens looked especially tiny next to the formidable band members. “This is JOEY,” Muir screamed as an introduction. The guests were then ushered off stage before Diaz propped one foot onto a monitor and began the opening twangs of “Send Me Your Money.” The entire set went seamlessly and without any hiccups, other than the two enthusiastic tweens.

Suicidal Tendencies in its current iteration released not one, but two records in 2018 alone — an EP as well as a full-length record. “The EP was to set up the full-length album,” said Dean Pleasants, who has played lead guitar with Suicidal Tendencies since 1996, as well as guitar for Muir’s side project Infectious Grooves. “[The EP] was sort of a teaser of some of the punk stuff to come and also gives us a chance to put out music we normally wouldn’t put on a Suicidal record. We have, like, an Iggy Pop song and couple instrumentals and things like that,” Pleasants explained. 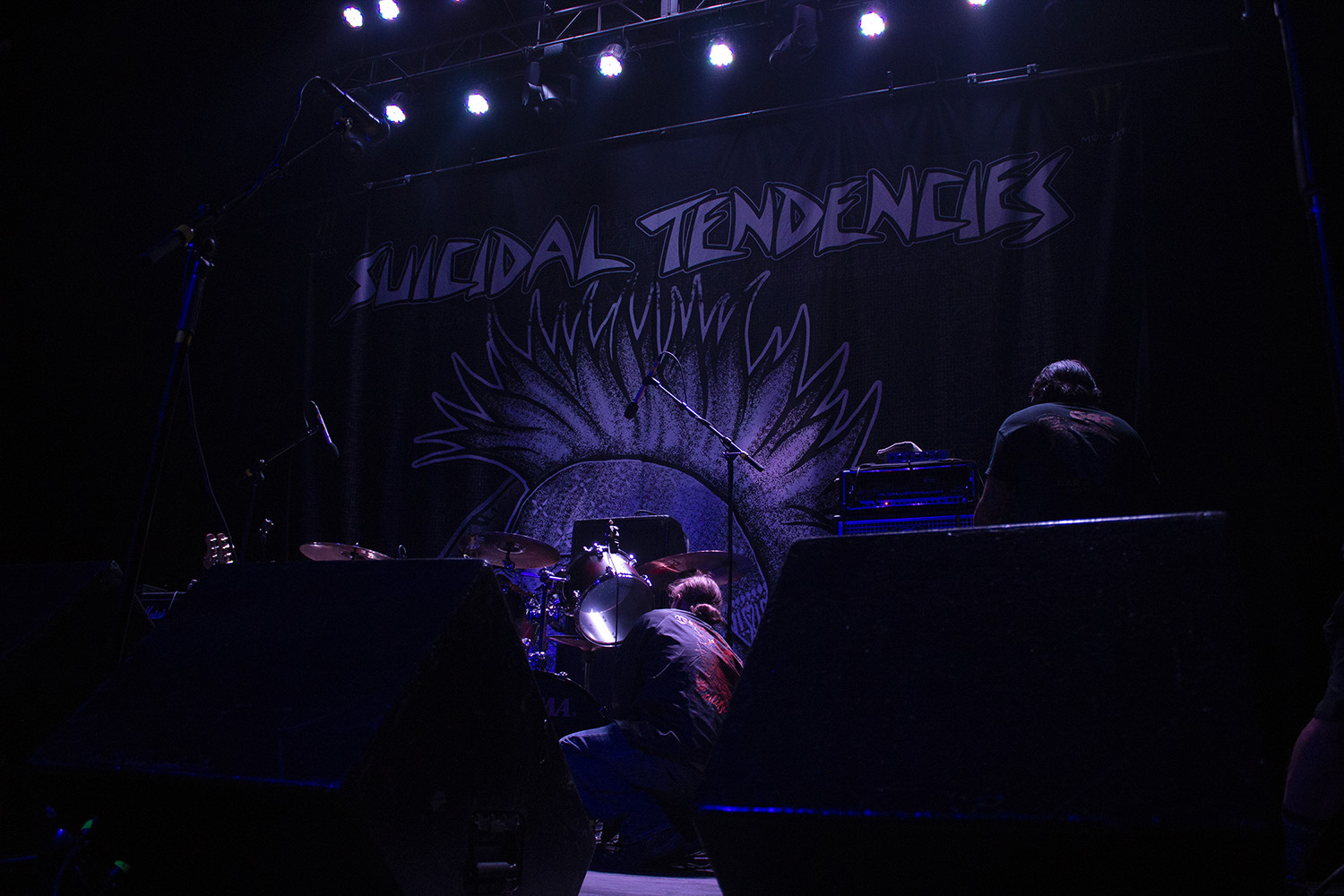 The full-length album, STill Cyco Punk After All These Years, released on Muir’s own Suicidal record label on September 7 of this year, has been characterized as a re-recording of a 1995 album of the same name released under Muir’s side project, Cyco Miko. However, the term “re-imagination” is a more fitting description of STill Cyco, as the record revisits their early ’80s punk aggressions while simultaneously showcasing the band’s development in sound over the last two decades.

Former Slayer drummer David Lombardo joined the band for this latest record, as well as the tour, and his iconic double bass drum could be heard pounding away behind the rest of the band on stage. “Do you guys like to sing?” Muir asked the crowd between songs. “I can’t fucking sing but that never stopped me,” screamed Muir before launching into a slightly more thrashy version “I Saw Your Mommy.”

The band ended their set with the slower anthem “You Can’t Bring Me Down,” rocking the venue to its core as Pleasants tore up and down the neck of his guitar and Lombardo unleashed pounding crash after crash on his drum kit. With two new releases this past year and a fully healed back, it’s clear that ‘Cyco’ Mike Muir still has unfinished business.

Article and photography by Padideh Aghanoury.

Guest Author Bio: Padideh Aghanoury is a Denver native who loves Steve Albini even though he’s such a hater.