Creating art can be expensive. Art supplies tend to hold weighty price tags and for a beginner artist the task of practicing usually ends up costing more money than they make. But local creative Dylan Lipke took a thrifty approach to that dilemma when he was in college by repurposing pizza boxes as canvases. Now, four years later, Lipke makes enough money in his full-time job to afford more traditional supplies but continues to paint on the cardboard carcasses of once-enjoyed meals. And in doing so, he’s discovered a few things about his artistry that might have otherwise been missed on paper or canvas. 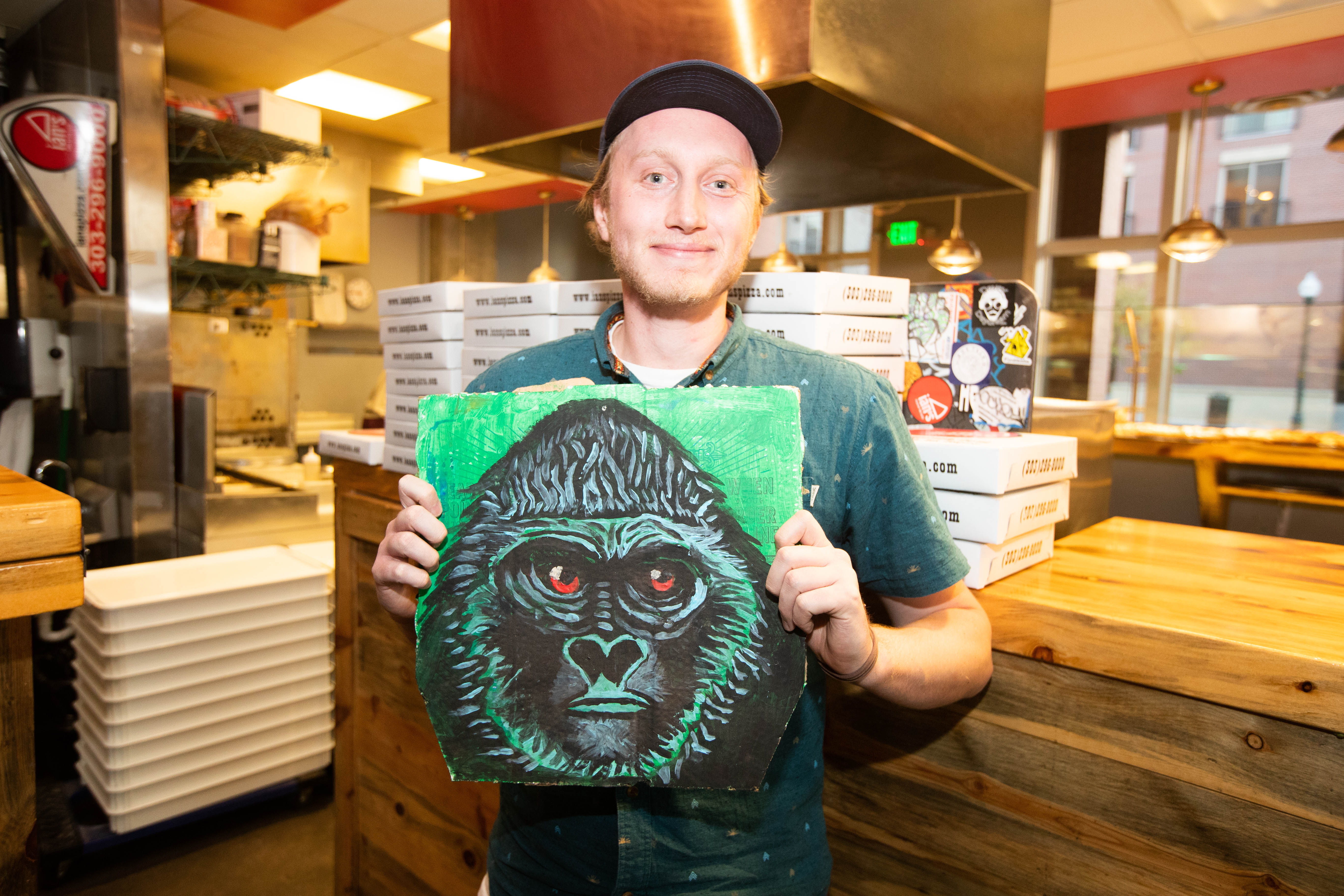 “So I’ve probably painted in total 150 to 200 pizza boxes at least,” Lipke divulged. “On average I guess like I’ll spend probably 30 minutes to an hour per pizza box. So it’s really quick, rough, abstract art and most of the time I’ll go into it not knowing what I’m going to paint and just go fully free of mind and just see what happens. So it’s very loose. It’s not necessarily super thought out, but it’s a good way to express ideas and thoughts. The collection is almost like a sketchbook more than anything — for ideas of colors and different designs.” That ever-evolving 3D sketchbook gives Lipke inspiration for some of his other pursuits, including graphic design, which he went to college to study. And, sometimes his pizza box paintings become the album art for the band he is in with his brother, Chilly Folks.

After painting roughly on the pizza boxes, Lipke scans the image into his computer and touches up the design in Illustrator. Since his education provided him the tools to modify and create art using technology, the finished digital pieces are much cleaner, with clear lines and more vibrant colors.

From start to finish, the only new art supply that Lipke uses is the paint, and usually, he doesn’t buy the top-of-the-line paint for the greasy boxes. Lipke explained, “the kind of cool thing about pizza boxes is that it’s so informal and so natural that it doesn’t matter what’s on it, you know, I think people can get over that because it’s not some fancy canvas.” Although the pizza box idea started because his friends and he purchased a lot of pizza — like most college students — the choice to repurpose pizza boxes is an especially sustainable one because pizza boxes are generally not recyclable. If the box becomes grease-stained, the paper fibers in the cardboard cannot be separated from the oil, leading recycling companies to throw pizza boxes in the trash.

“I like that idea that when I paint these it’s reusing something that will go in the garbage anyway, so I give it a second and sometimes a third life before it dies,” Lipke commented. “It also makes me aware of the surface I’m painting on and thinking of it more than a box I’m going to eat food out of. It can be a canvas, or a piece of art or just something that sticks around longer in this world than a piece of trash.”

Lipke has created hundreds of these pizza box paintings in the last six years, but he’s not looking to become a full-time pizza box artist. His full-time jobs since graduating with a graphic design degree have been geared toward technology, with his current one revolving around quality control for interactive signage. “It almost helps me balance things better than [pizza box art] being my full-time thing because in graphic design I felt like I was designing for other people. I didn’t have that creative freedom and then I’d be so burnt out by the end of the day I’m like, ‘I don’t want to go do my own thing right now.’ So I think like with this, it’s like I can do my job, then I can be creative on the side and kind of have that as my fun project when I get home,” he explained.

The pizza box artistry fuels Lipke and allows him to fulfill his other passions in his full-time jobs. It also loosens his creative intuition without costing him an arm and a leg, and ultimately, it illustrates how art can be assimilated into our everyday lives but still remain meaningful and purpose-driven. Lipke doesn’t need a gallery or museum to showcase his talent, he just needs to order a quick dinner. 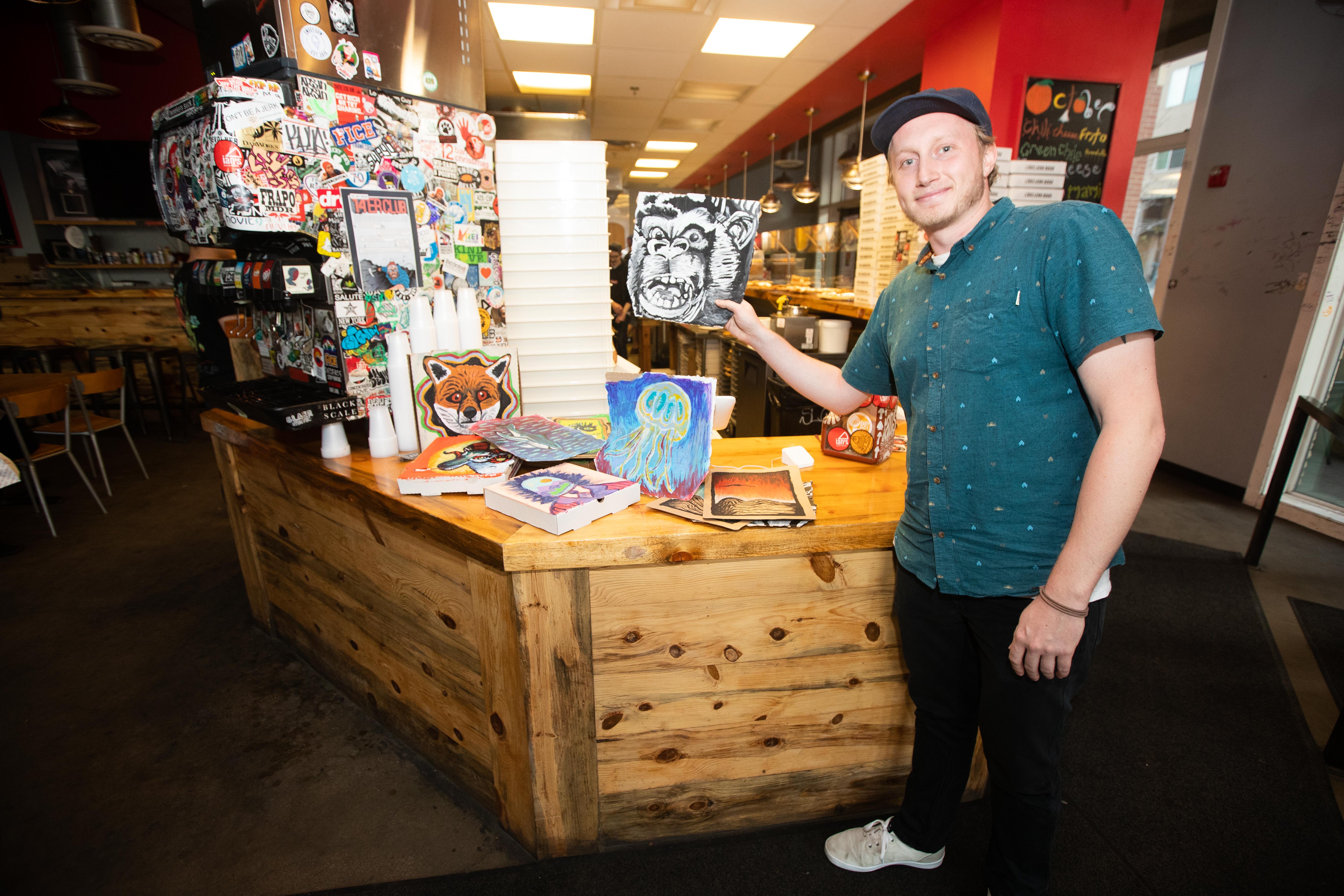 The photos for this article were taken at Ian’s Pizza, 2210 Blake Street.