Often categorized as ‘psych-rock,’ Denver’s déCollage is less a band whose music can be categorized sonically, and more art that needs to be experienced. And their newest music video is a perfect example of this. The psychedelic video for “Womb of the Dawn” answers a question you may not have realized you want to ask — what would it be like to hangout inside of a kaleidoscope?

“Womb of the Dawn” is the title track of déCollage’s third album. In addition to the music video, the band has already released three remixes of the song. And they will be releasing four more over the next few months. The video is a compilation of many things, from space frogs to psychedelic glasses, and even a little bit of help from the man that helped bring MTV’s Snooki to your TV.

The video was filmed three years ago with help from a few of déCollage’s friends. Brent Paul Pearson helped with filming. He is the founder of Future Eyes — whose holographic glasses you’ve probably seen you’ve attended a festival recently. Their holographic aesthetic is clearly present in déCollage’s new video. Natalie Wetzel, a transdisciplinary performance sculptor, helped with costuming and also starred in the video. Her creations have been worn by a range of artists, from Temples to The Flaming Lips. Miley Cyrus even posed inside one of her sculptures last year for the cover of Plastik Magazine. 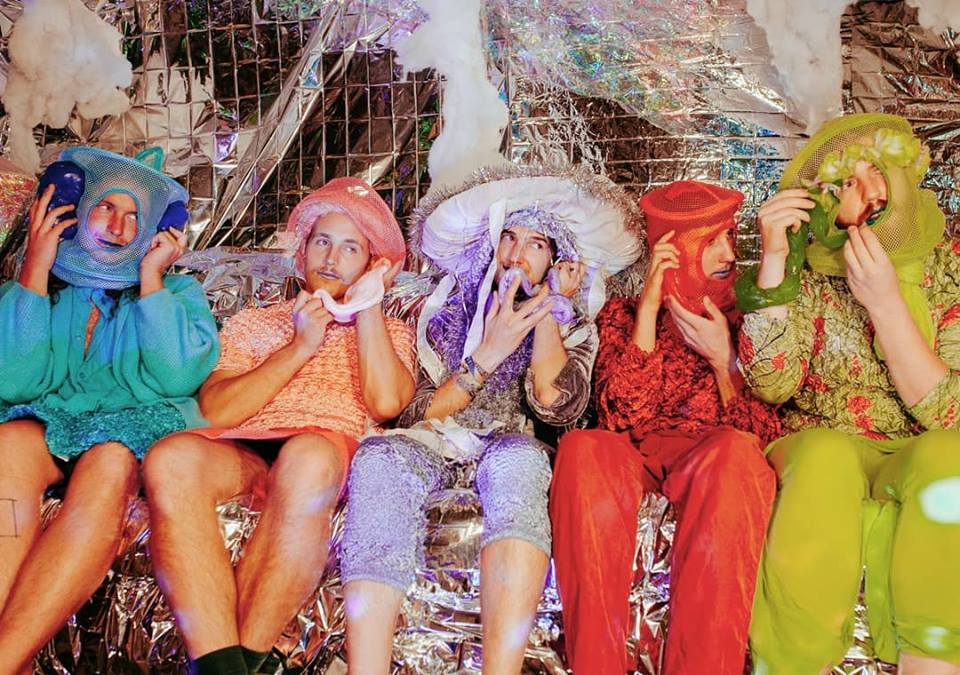 Wetzel’s artistic work is the perfect compliment to déCollage’s kaleidoscopic video. “I make costumes that unleash the cosmic creatures I hold dearly, deep inside my psyche. In this video, my Space Frog landed with Lolly, as my demure dragster of a chariot whip,” said Wetzel in a statement to 303 Magazine.

In addition to designing the Space Frog, Wetzel also designed stylish accessories that were worn in the video. Throughout most of the video you can see Wetzel’s Sashtags — sashes with hashtags on them. Wetzel’s fun costuming fits in with the psychedelic aesthetic of this video excellently.

déCollage passed off the editing to Colorado’s own Ryan Bell. Bell works as the videographer for Snooki’s reality spin off of MTV’s “Jersey Shore.” However, he’s been a friend of déCollage since before he moved out of Denver. “We’ve been friends for a long time and he’s basically my older brother,” said déCollage’s Reed Fox in an interview with 303 Magazine. Bell edited the video in the bus while on tour, amidst working on Snooki’s show. déCollage gave the videographer total control and the result was more psychedelic than they could have ever hoped.

The fun will continue at déCollage’s Deep Sea Soirée at Syntax Physic Opera on Friday. déCollage, joined by local bands Holophrase and Poppet, are throwing an oceanic themed Halloween soirée. There will also be a one of a kind chance to win some awesome local music swag.

“So, you know bobbing for apples?” said Fox. “Well Jack Roberts had the idea of having people bob for oysters in Syntax on Friday. Basically people can pay a few bucks to grab a plastic oyster out of an aquarium and each oyster has a prize written on it.” Prizes will include merch from all three of the performing bands, gift cards and more.

Tickets for Friday’s show will be available at the door for $7. For the Love of Locals will also be filming the show and  streaming it on Halloween night.