DJ Low Key is an important fixture in the Denver hip-hop community. The man has solidified his reputation by throwing weekly parties at The Meadowlark. Every Friday year-round he and DJ Lazy Eyez throw The Solution in the basement, and during the summer he hosts Goodness on the patio. Both parties curate tasteful playlists dominated by excellent tracks from across hip-hop and rap. While the song selection usually favors the more enlightened components of the genre, it is by no means a “conscious rap” party. Good is good, and the involved DJs always play what they like — the result is inevitably a dance party and good vibes.

The Solution started 12 years ago at Milk Bar, then bounced around before establishing itself as a permanent fixture at The Meadowlark. Goodness has been around for seven summers — each year the Sunday day-party brings out heads with the regularity of church service. The parties are good in their own right, but their deep foundation is a palpable source of the inspiration that can be found at each event. 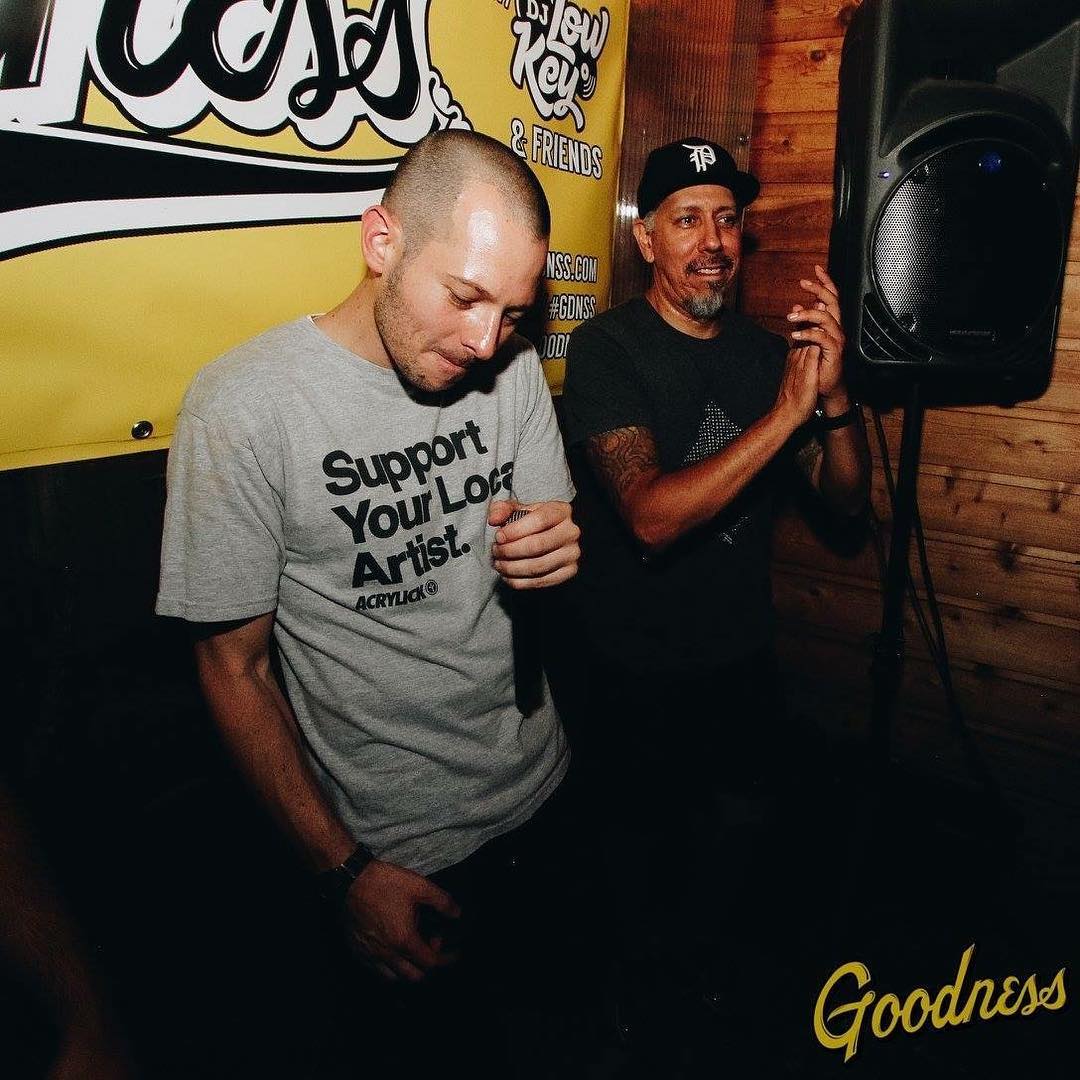 Low Key grew up in Newnan, Georgia. He moved to Colorado in his teens, attending high-school in Manitou Springs then studying business administration at the University of Colorado Boulder. He’s been DJing professionally since he was 19, and after moving to Denver in 2005 his career has evolved from playing top-40 and other genres designed to please crowds, to playing the stuff he would like to hear at a party. Fortunately for everyone, the recipe has worked. Both of his parties have since taken on lives of their own. “People come out for the right reasons, there’s a lot of trust built up,” mused Low Key.

While the parties mostly live in Denver, Low Key has thrown Goodness and The Solution events at SXSW, proving the event’s viability across venues and cities. There’s a certain je ne sais quoi to be found at the man’s parties that transcends the music — the hard-sought vibe that makes a celebration great. Low Key has paid his dues to get where he’s at. “I’ve started and failed more parties than I could remember the names of,” he said, discussing the necessary ups and downs integral to success. “I also got pocket dialed a year ago by Anderson .Paak,” he said, ruminating on the nature of the game. 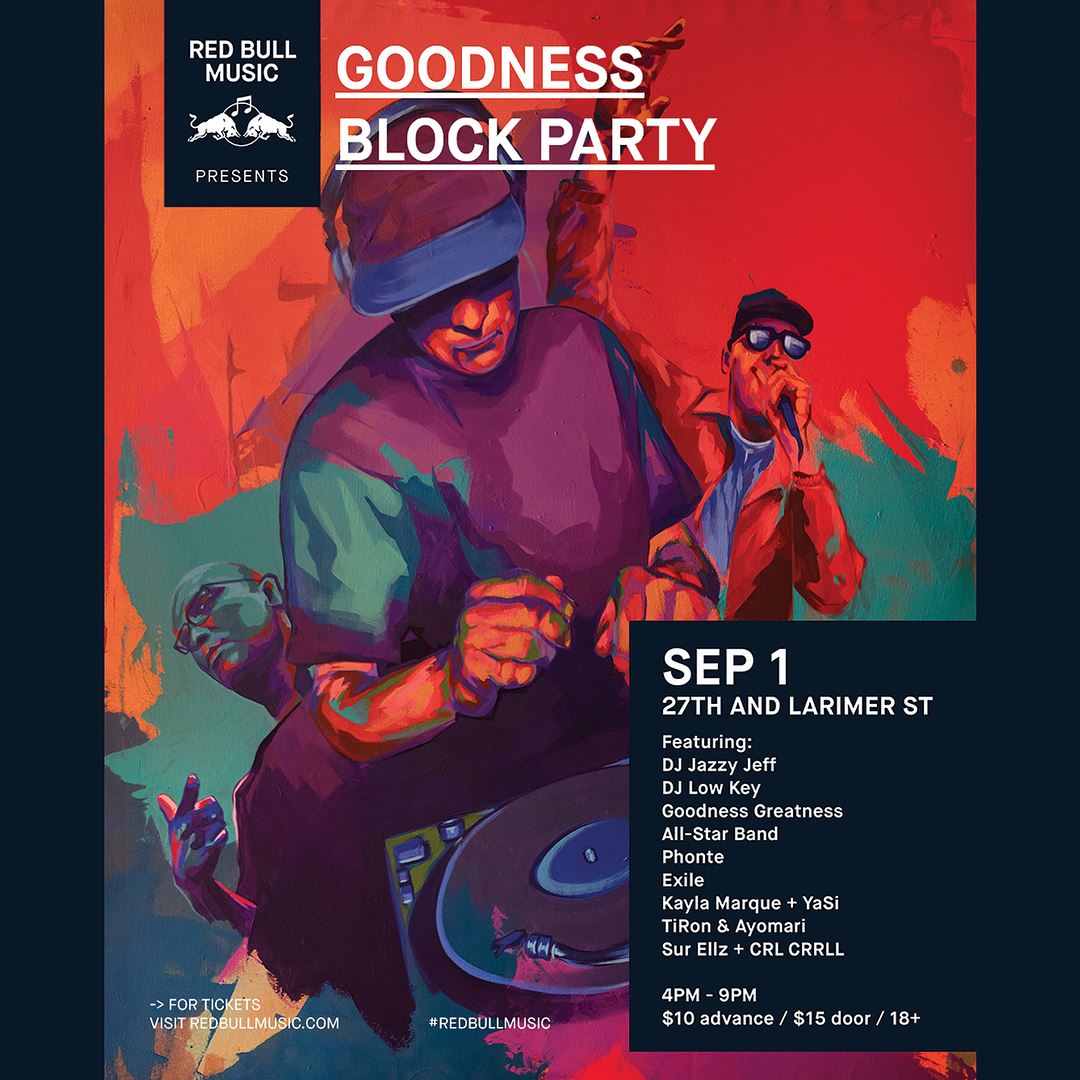 This Saturday Low Key is teaming up with Red Bull to bring the first-ever Goodness Block Party to the street outside The Meadowlark. The event is being co-headlined by DJ Jazzy Jeff and a one-time super-group dubbed the Goodness Greatness All-Star Band. National heavyweights Phonte — of Little Brother — and Exile — of Blu and Exile — are performing as part of the group, bringing their years of experience to the already impressive lineup. Former Anderson .Paak collaborators TiRon and Ayomari are bringing the West Coast party rap, with Low Key curating set-breaks. Local favorites Sur Ellz, Kayla Marque, YaSi and CRL CRLL are rounding out the already stacked lineup.

Low Key says the attention to detail is going to be a bit above average for a block party of it’s kind — with the combined resources of his group and Red Bull and Two Parts handling the production audiences are surely in for a treat. The festivities are intended to celebrate the Golden Era of a neighborhood whose identity has undergone a radical transformation in the last five years. “The party is set up for everybody, but not just anybody,” said Low Key.

The Goodness Block Party will take place on 27th and Larimer Street.  The show goes from 4 to 9 p.m. and tickets can be found for $10 here. All photography by Armando Geneyro unless otherwise stated.