Just the term “corpse flower” gives a pretty adequate description of what to expect when one blooms — a stench and a nearly gory visual display. For plant lovers, the corpse flower is a rare treat that requires something of a refined palate (or, more appropriately, smell). Three years ago, “Stinky” — one of the corpse flowers at Denver Botanic Gardens — bloomed for the first time in its 15 years of growing and marked the historic first corpse flower bloom in the Gardens’ 64-year lifespan (at that time). Now, Stinky is blooming again and this time the bloom may be even bigger than the first. 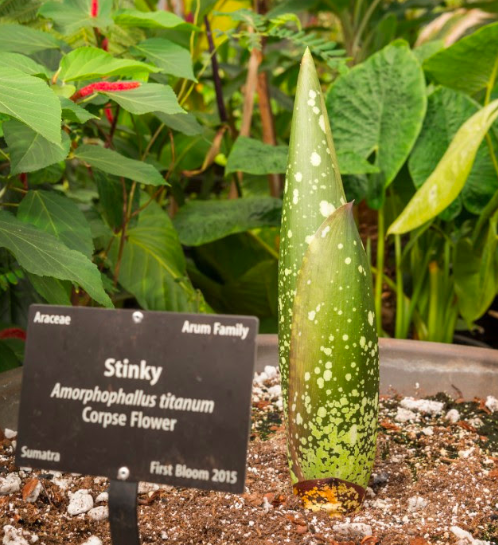 The corm of Stinky. Photo courtesy of Denver Botanic Gardens

Corpse flowers, or the titan arum plant, only grow in the wild in Indonesia but are cultivated around the world. They are huge flowers, sometimes growing over 10 feet tall and with widths up to 16 feet. Usually, it takes seven to 10 years for a plant to produce its first flower and then the blooming cycle after that varies by plant. The beauty, spectacle and oddity of the corpse flower bloom rests in the crimson color and foul smell it exudes when the flower opens. Both the color and smell (similar to rotting flesh) are attributes the plant uses to attract carrion-eating beetles and flesh flies — a tactic to entice pollination from those insects. 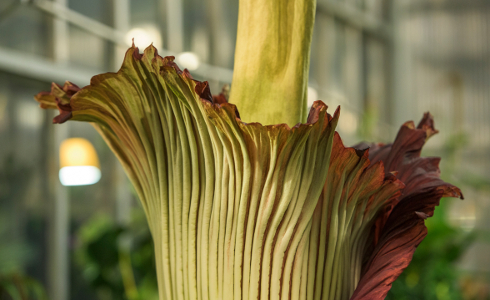 Stinky is currently measuring at roughly two feet tall and the horticulturists at the Gardens estimate it will reach to five feet before it blooms. That measurement is for the corm — an underground stem that stores energy and essentially hibernates before popping back up for another bloom — and this time, Stinky’s corm is larger than before. Generally speaking, the corms of corpse flowers are the largest in the world.

A year after Stinky’s first bloom, another corpse flower called “Little Stinker” bloomed, attracting more onlookers both in person and online. Some of the comments about the bloom showed disappointment that a particular visit wasn’t synced with the actual blooming (something that only lasts between 12 and 48 hours) or that the stench wasn’t as putrid as they were led to believe. Of course, there were plenty of admirers too, especially the people who happened to experience the unexpected bloom first thing in the morning (it surprised everyone by opening in the middle of the night).

This time around, interested visitors should keep in mind that the bloom is a fleeting occurrence and the smell only happens during that 12 to 48-hour range. In order for people to keep tabs on the progress of the bloom, Denver Botanic Gardens will update their social media accounts regularly and send out “bloom alerts” to those signed up for their newsletter.