Denver band Lost Walks performed their Gothic Rock Opera “Wolf, Woman, Man” at the McNichols Civic Center Building on July 6. Following an emotionally evocative and intimate performance by Anna Morsett of The Still Tide — who remarked several times on the crowd’s intense attentiveness — Lost Walks took the stage, each of their seven members dressed in black. With heavy drums, a violin, a couple guitars, a cello, and a harmonium, they transformed the small space into a foreboding evocation of the deep, mysterious woods, where the tapestries of howling wolves and occult symbology hanging behind the stage set a backdrop of mystery, fear and hypnotic intrigue.

Once the dark mood was established after “Into the Wilderness,” the opening track, four women wearing pale makeup and shredded gray dresses walked slowly in unison up the aisles. Cupped palms extended, they bore glowing stones and tiptoed as if in a trance. They stopped in front of the stage. The music picked up, and the four women began dancing wildly, transforming the scene into a hidden ritual contained to the depths of the woods. All that was missing was the bubbling cauldron.

For the next 45 minutes, Lost Walks performed their rock opera’s diverse musical movements while the four dancers expressed the music’s emotions. Each of the four dancers displayed remarkable athleticism, oscillating from crawling wolf-like across the ground to leaping wildly and powerfully through the air. They never appeared breathless. Their choreography was seamlessly synchronized, bringing raw, animalistic energy to the heavy, atmospheric music. 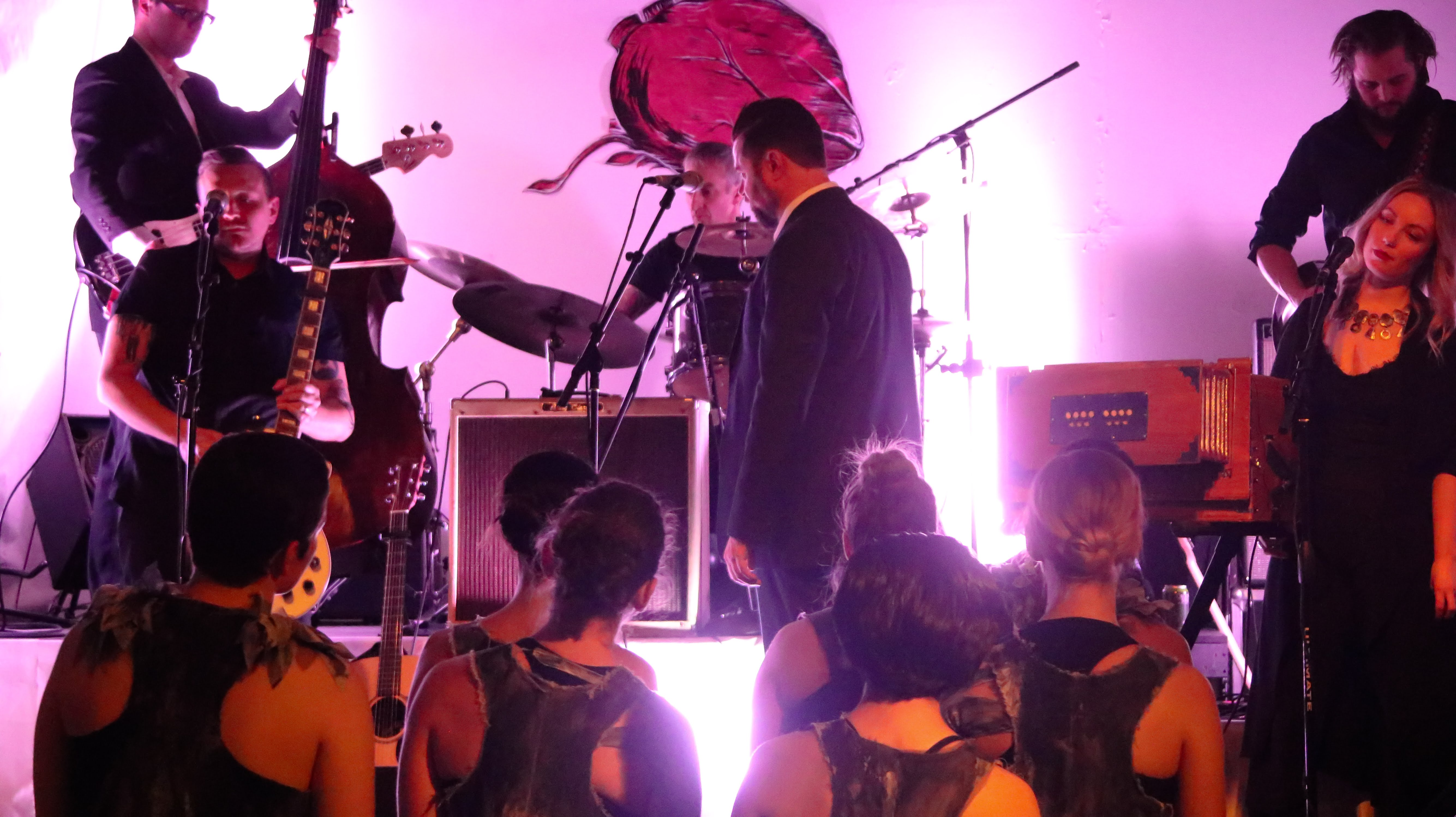 Like all rock operas, “Wolf, Woman, Man” tells a story. Unfortunately, the singers’ mics were not loud enough to make the lyrics clear. Dameon Merkl’s eerie, low-pitched, growl-like singing was entrancing, but with the words unclear, it played more like another instrument. As the dancing was interpretive, it conveyed emotion rather than narrative.

A follow-up conversation with Jen GaNun— singer, harmonium player, and Lost Walks founding member — clarified that the story follows a couple that moves to a desolate mountain region and “ultimately faces challenges from the elements, each other and a lone, injured wolf.” A unique relationship forms between the woman and the wolf, and the woman wrestles with her primal nature while the wolf must choose between protecting her or returning to the deep woods.

“At first, the wolf was kind of the evil character,” GaNun said. “Then we visited the Colorado Wolf and Wildlife Center and realized what was going on with wolves right now in the States, and that it was disrespectful and irresponsible to portray him in that negative light. We didn’t want to be part of the ‘big bad wolf’ story.”

Lost Walks intended to play their part in helping re-establish wolf populations in Colorado and beyond. They opted to create the wolf into a dynamic character who, in spite of his wildness, is not evil. Rather, the story associates wolf-ness with freedom.

In the show’s most hypnotic moment, the shadows of two dancers — one of them donning a wolf mask — moved in patterns behind a translucent screen. The shadows’ interplay beautifully evoked the woman’s interplay of resistance and desire to embrace the wolf.

“It’s her dreaming, ‘What would this look like if I got out and ran with the pack?'” GaNun said. “‘What would I be like if I were free?’”

After a wild ride through a wilderness of emotions wrought with energetic expression and authenticity, the four dancers walked back down the aisle and out the door as the final droning chords of “Out of the Wilderness” signaled the rock opera’s end. To enthusiastic applause, the band humbly thanked the attentive crowd. They further encouraged everyone to visit the Rocky Mountain Wolf Project table at the back and learn what they can do to help re-establish the species in Colorado.

As much as clear lyrics would have enhanced the experience, the performance itself was a unique spectacle, and that uniqueness provided more than enough to keep an audience engaged for a great night of music and performance art, made all the more satisfying in its connection to a philanthropic mission.