Denver native Lisa Engelken has been a dancer for as long as she can remember. Her experience in Denver includes being a founding member of the Rennie Harris Grass Roots Project (a street dance theater company), performing in a dance battle crew called Nasty Kidz and training and performing with the legendary Cleo Parker Robinson Dance school — which led her to become a current faculty member of the company. All of this dancing delivered Engelken to a place where she wanted to share the art of dance with others — something she thinks is not acknowledged enough in Denver’s cultural landscape.

Last year, Engelken applied for an IMAGINE 2020 grant and was awarded the money to create a unique dance performance at the McNichols Building. IMAGINE 2020 is an initiative set out by Denver — after gathering a multitude of public comments — to improve the city’s cultural landscape. Grants go toward all kinds of art projects and cultural endeavors, including dance. After that performance (which happened in February of this year) Engelken knew she wanted to do another, similar event — only bigger. The McNichols Building was more than happy to acquiesce, giving Engelken and her co-founders a spot on the second floor.

Called Breaking Barriers, the event will span the entire weekend from August 3 through 5 on the second level of the McNichols Building, offering workshops and classes in street and studio dance as well as a final performance. During the same weekend, the Queens of Hip Hop (a Colorado-based hip hop women’s organization) will be hosting an event on the third floor. The pairing couldn’t be better, with one of the judges at Queenz of Hip Hop (Kim Holmes) helping with choreography for the final Breaking Barriers performance on Sunday. But also, Breaking Barriers is about marrying the styles of the street and the studio — something that hip-hop lovers should be able to relate to.

With a weekend full of events directly pointed at dancers — mostly pre-professional or professional ones, although anyone is welcome — Breaking Barriers is also about connecting those dancers under one roof. Engelken explained, “my mission with this is to create more community in the dance fields — between Denver, Boulder and the rest of the Front Range. I think it will be interesting and exciting for professionals to come together in that atmosphere. I’m playing off the title — not only breaking the street-theater divide but also bringing together people from different communities in Colorado.” 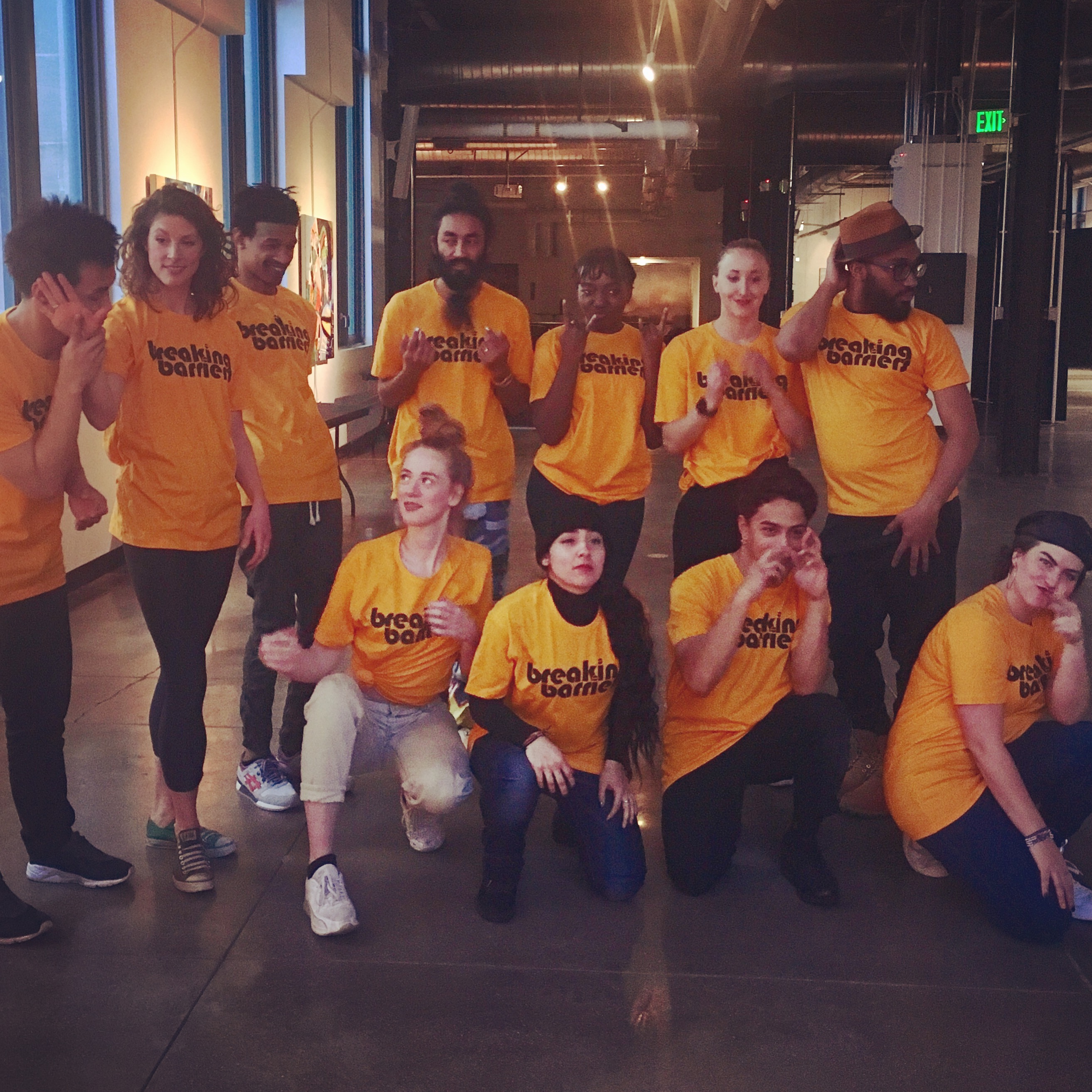 Dancers from the February performance. Photo courtesy of Lisa Engelken

Denver and the Front Range aren’t known for their incredible dance opportunities, although there are plenty available. Engelken believes that the lack of excitement about professional dance in Colorado is due to literal barriers — like the mountains and other geographic obstacles — and mental. “People are competing for funding and for clients, and though that’s natural for all dance communities, I lived in Brooklyn a few years ago and I was surprised at how much crossover there was there,” she described. “There was a lot of cross-breeding happening and I noticed moving back to Colorado that that wasn’t the case. Everyone I knew pretty much stuck with what they know or are good at.”

Instead of sticking to one genre, Engelken prefers to fuse her favorites — namely, street and studio. This results in performances that attract diverse crowds, from the classical ballet lovers to the breakdancing fiends. For the dancers who participate in Breaking Barriers, this tactic offers them an opportunity to dance outside their comfort zone.

The IMAGINE 2020 performance in February that ultimately paved the way for Engelken to create Breaking Barriers attracted about 300 people for a one-day show, where four duets were showcased. Instead of only showcasing professional talent with this one, Engelken and her co-founder Maren Ellerman decided to host workshops and classes for the majority of the time and only bring out the paid and professional dancers at the end for a cumulative show. When they held auditions for the August performance, there were so many interested people that they had to change their original number of six hired dancers to eight. The dancers will be Engelken, Maren Ellermann, Carrie Farmer, Kris Haro, Kaylin Richards, Sarah Touslee, Anna Gunderson and Julie Lee.

For the final performance on August 5 from 7 to 9 p.m., the dancers will display a piece of choreography they learn throughout the weekend from choreographers Kim Holmes and Dana Wilson. Holmes and Wilson do not know each other and have never met nor choreographed something together before and the dancers will only have a few rehearsals to get everything right. It’s an exciting prompt that can either coalesce in something amazing or something that simply didn’t come together — but the individual talent of Holmes and Wilson leads us to believe it will be the former. Holmes has choreographed for the likes of Jay-Z, Lil Kim and Missy Eliot, Wilson (who is originally from Colorado herself) has credits with Justin Timberlake, Kendrick Lamar and Robin Thicke.

So what will the final performance look like? Engelken said, “think Who’s Line is this Anyway? but with dancers. Maren will emcee this event giving dancers who volunteer on the spot task-based improvised theater pieces. We will premiere the piece of choreography in the middle of an improv-based show where audience members will also be performing. I’ve never seen anything like that in Denver before.”

We don’t need to explain that Denver is up-and-coming in the culture and art world, especially in the visual art realm. But the success of an event like this can only prove further that the Mile High city is ready to start supporting artists of all kinds, and perhaps more importantly, it will be a step toward local dancers supporting each other.

Professional Development Workshop, 6:30 – 8 p.m.
Friday, August 3
Dana and Kim will discuss how to define the goals, fund the work, attract the audiences and other important aspects of the dance industry. This workshop will be speaking and discussion based and will not involve movement.

Final Performance, 7 – 9 p.m.
Sunday, August 5
The first part of this performance will be interactive and feature local artists from the street and classical dance backgrounds, collaborating and creating original movement on the spot. The performance will close with the premiere of an original dance piece created under the direction of our headlining artists Kim and Dana.

All-inclusive tickets to the whole weekend are $50, tickets to individual classes are $15 and the final performance is $10. All tickets can be purchased here.