All photography by Brittni Bell

–
Not many of us can relate to the desire to make customized, collectible toys as a dream job. But what anyone should relate to is the desire to fulfill a lifelong dream. That’s exactly what artist Johnny Draco did when he moved to Boulder almost a year ago, landing a job with Kidrobot. Now, Draco is making a name for himself in Denver, creating in at least four different mediums — toy sculpting, graphic design, pen and ink linework and painting.

Before coming to Colorado, Draco grew up in Atlanta, where he honed his skills as a graphic designer, creating his own brand of clothing. While still living in Atlanta, Draco drew up an alphabet for the city with each letter representing a different landmark or business he frequented, the ATL Alphabet as he called it. After moving from Boulder in August 2017, the multi-faceted artist decided to acquaint himself with the Mile High City by creating another city-centric alphabet. With 26 days dedicated to the task, Draco came up with the DEN Alphabet — a personal and yet highly relatable artwork to showcase Denver places.
– 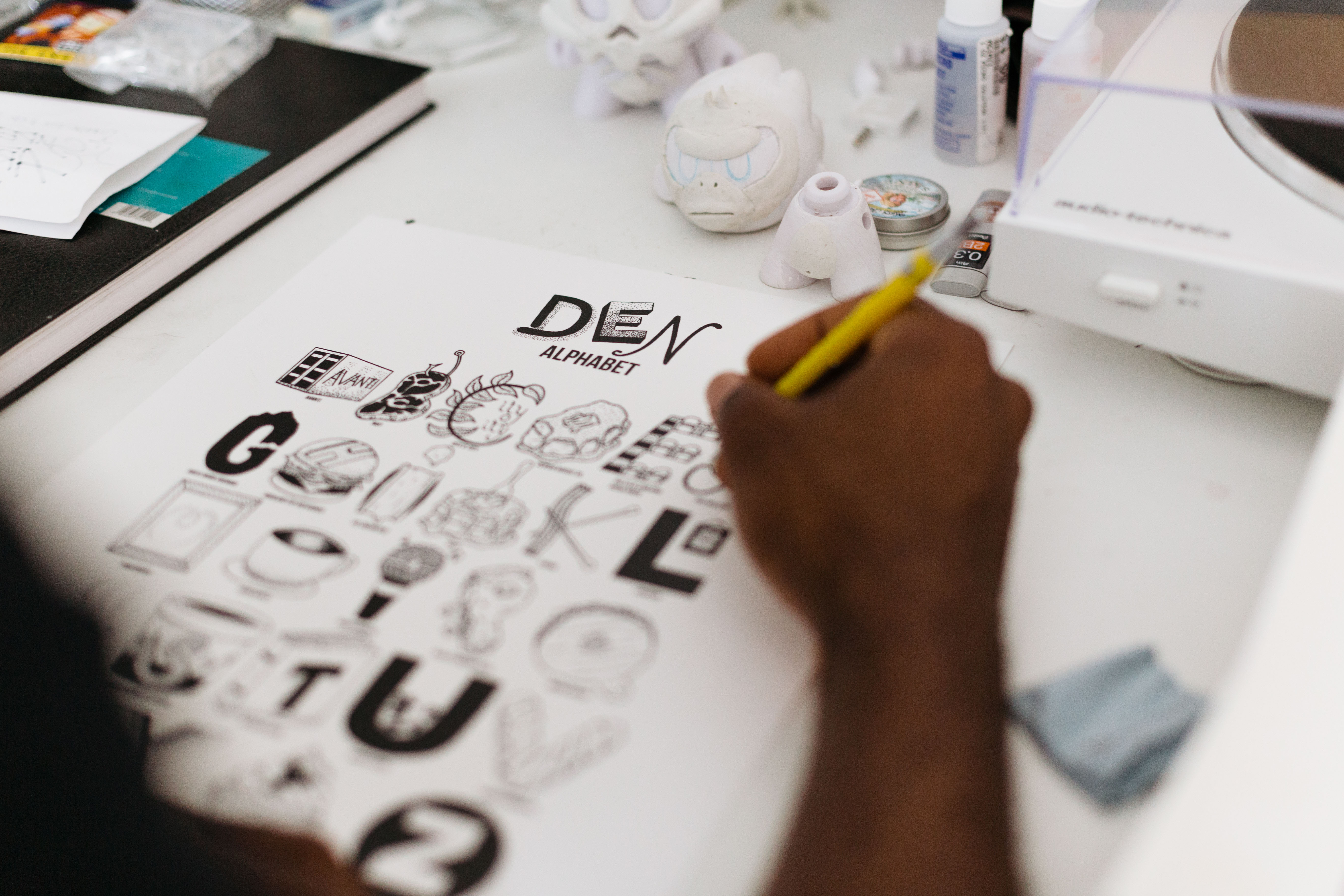 –
To backtrack for a moment, what exactly is Kidrobot? Why is it worthy of a dream job? Kidrobot primarily produces designer toys but also dabbles in apparel and other lifestyle accessories. All of their products are made by artists and come in limited editions — which makes them an appealing collectible for a broad range of people. It also gives many artists a steady income while still tapping into their creativity. Draco is now a senior concept designer for the toy company and splits his time between the Boulder headquarters and his Denver home.

303 Magazine sat down with Draco in the weeks before his first solo show in Colorado (at BAIT starting June 1) and as he released the DEN Alphabet to talk about his career path, his favorite cartoons and whether or not the dream job at Kidrobot is what he imagined.
– 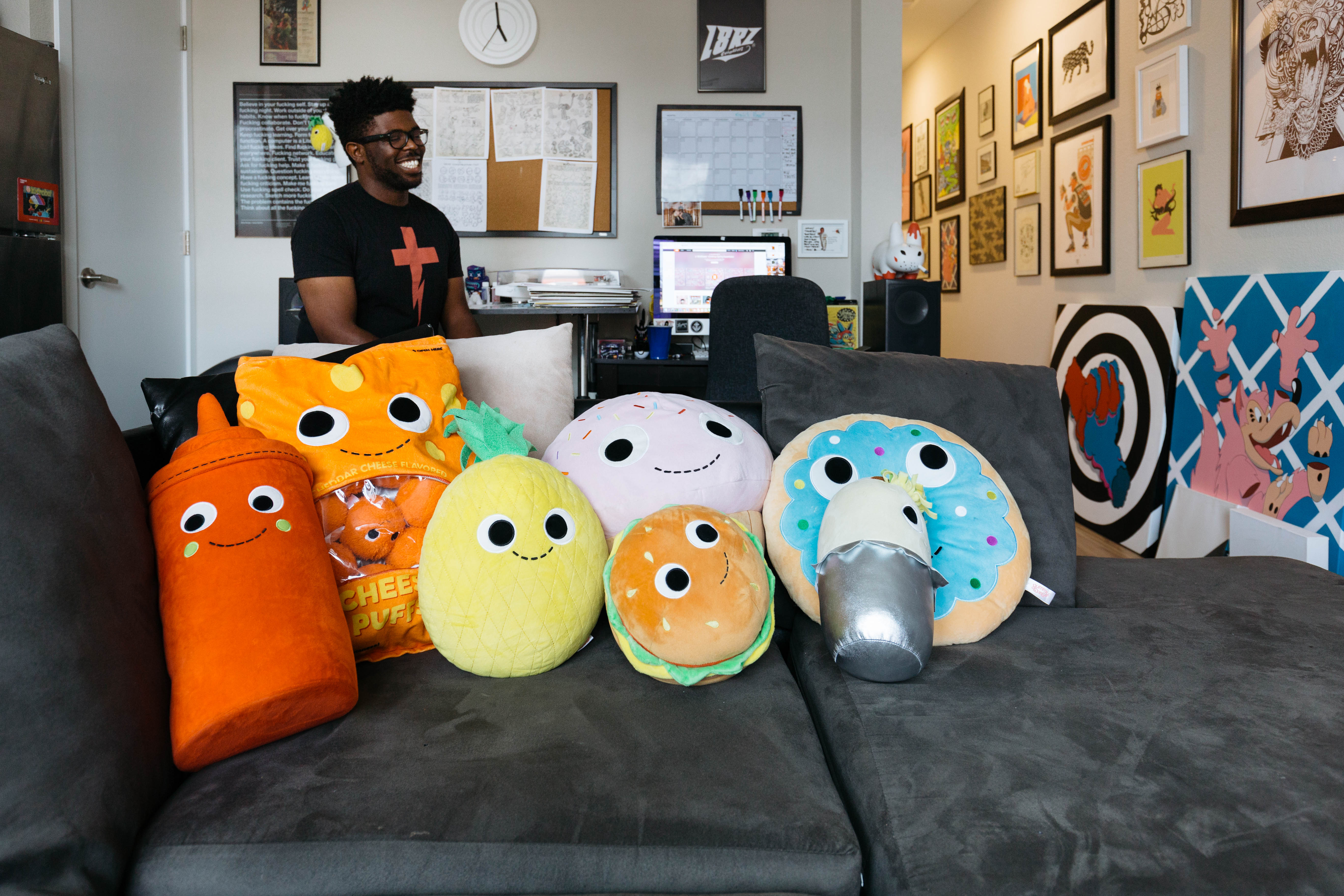 –
303 Magazine: Tell me about your dream of working for Kidrobot.

Johnny Draco: I basically first heard about Kidrobot when I was 16 or 17, around the time that Pharrell was doing cool music videos and I was getting into custom toys. I saw fashion-vinyl toys, as a cool different genre of culture that hadn’t really been in the US yet, it was already crazy in Japan. When I graduated high school I had a chance to go to New York and go to the Kidrobot store, and it was there that I realized I wanted my house to look like that, all colorful. That was when I realized I wanted to do my own clothing line though, and that was my entrance into creating art for a living.

JD: I went to Morehouse College — an all black, male college, where Martin Luther King Jr. went and graduated from — and I studied Political Science, which is totally different from art. I was also on track to become a lieutenant in the military.

JD: I did an internship at ABV [a marketing agency, design studio and gallery in Atlanta]. At first, I operated under the mindset that you can’t really make money off of art. When I went there I saw these guys, chilling and doing their art, and it made me realize that maybe I could be an artist full time. I just quit all the political and military stuff and started focusing on drawing, painting and creating clothing designs. It was the first time in my life that I did something my parents didn’t want me to do. At first, they weren’t sure, but now they’re starting to see. They’re really supportive now.

303: On your website, you say that “being a child is the purest form of creativity.” How do you keep your inner child alive and well?

JD: It’s a lot of different things, maybe going to the park and swinging. Or keeping up with the current cartoons. Just keeping everything you do as fun. Sometimes you get so caught up in the now of life and the responsibilities of an adult that we forget who we are and what we want to do. Adulting sucks sometimes.
–

–
303: My first thought was “he has to like cartoons” — so is that true? What did you like when you were younger versus what you like today?

JD: Yes. When I was younger, I watched “Courage the Cowardly Dog” — a little creepy but great. “Dexter’s Lab.” “Dragonball-Z.” “Ed, Ed and Eddy.” I love goofy and weird stuff. I’m really deep into anime and manga. When I got into high school my friend put me onto all these animes and now I’m stuck. Now, I keep watching “Adventure Time” over and over again. I also love “Gumball.” And for anime right now, I’m watching “One Piece.” I go across the whole spectrum of style, but I especially like action or thriller cartoons.

303: What are some of your favorite accomplishments in your career so far?

JD: Kidrobot, just in general. It’s always been a dream to work there. In college when people asked what I wanted to do with my life, that was always my answer. Just working there, in general, is a huge accomplishment, but then making my own custom toy was the icing. I created him last February.
– 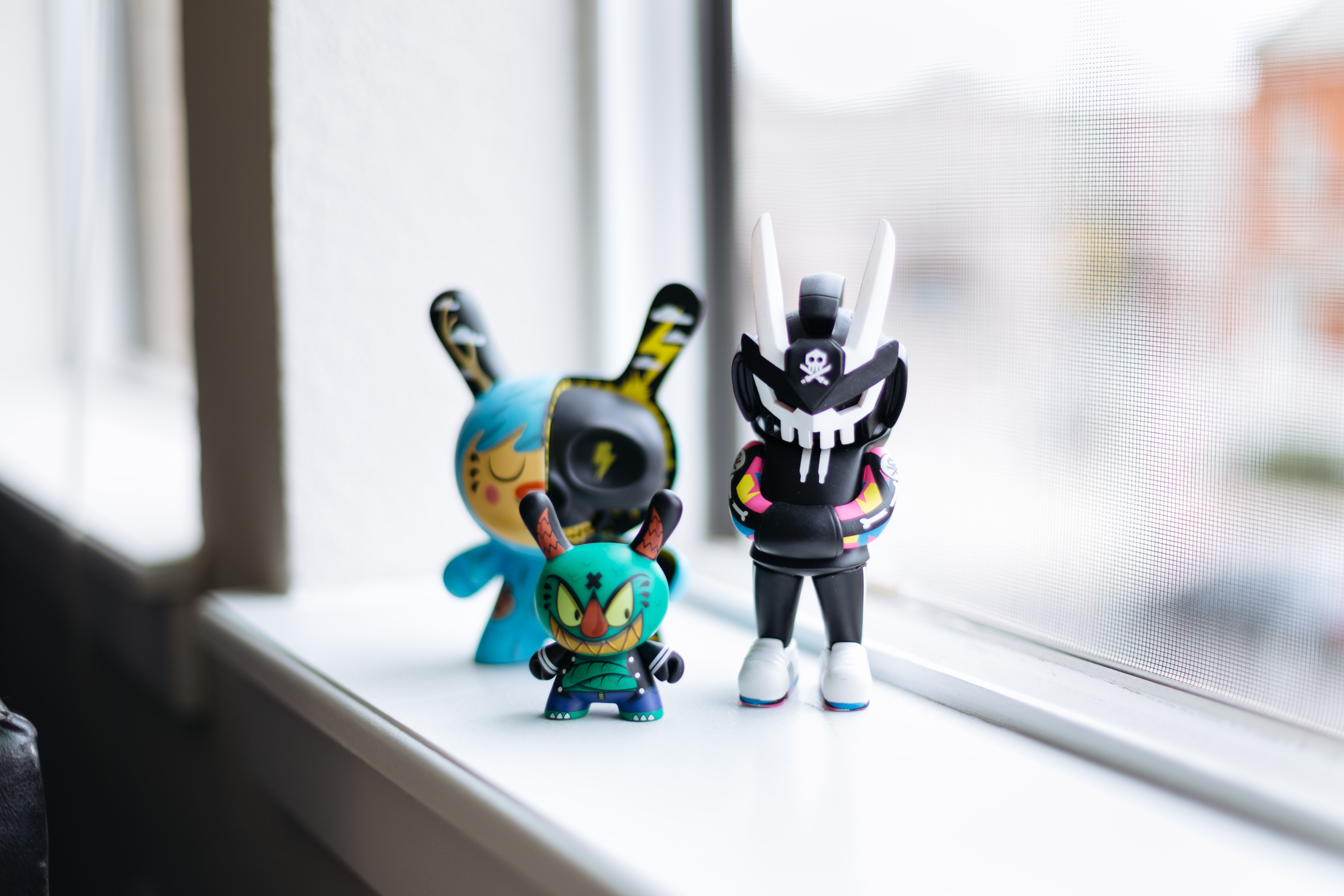 –
303: Since you’ve already achieved one of your biggest dreams, do you have any failures?

JD: I don’t think I’ve had many failures, I just see them as missed opportunities. For instance, the first city alphabet, for Atlanta, wasn’t promoted the right way. Instead of drafting out an email and explaining it and then sending it to all the businesses I drew, I just sent a copy of my artwork without any explanation and there was some confusion. I learned something from that one.

303: What first inspired you to start creating the alphabets?

JD: When I started getting deeper into art, I wanted to get as much exposure and get better at my craft. I was thinking of a better way to promote myself. Usually, when you make a print for people to buy into your art, you need to relate to someone. And I thought about the alphabet because everyone can relate to that. I thought about putting my points of interest, or favorite places or places of inspiration, and that’s how the ATL list was formed. I’ve heard about people taking that and making a scavenger hunt out of it and doing really cool things, which I love.
– 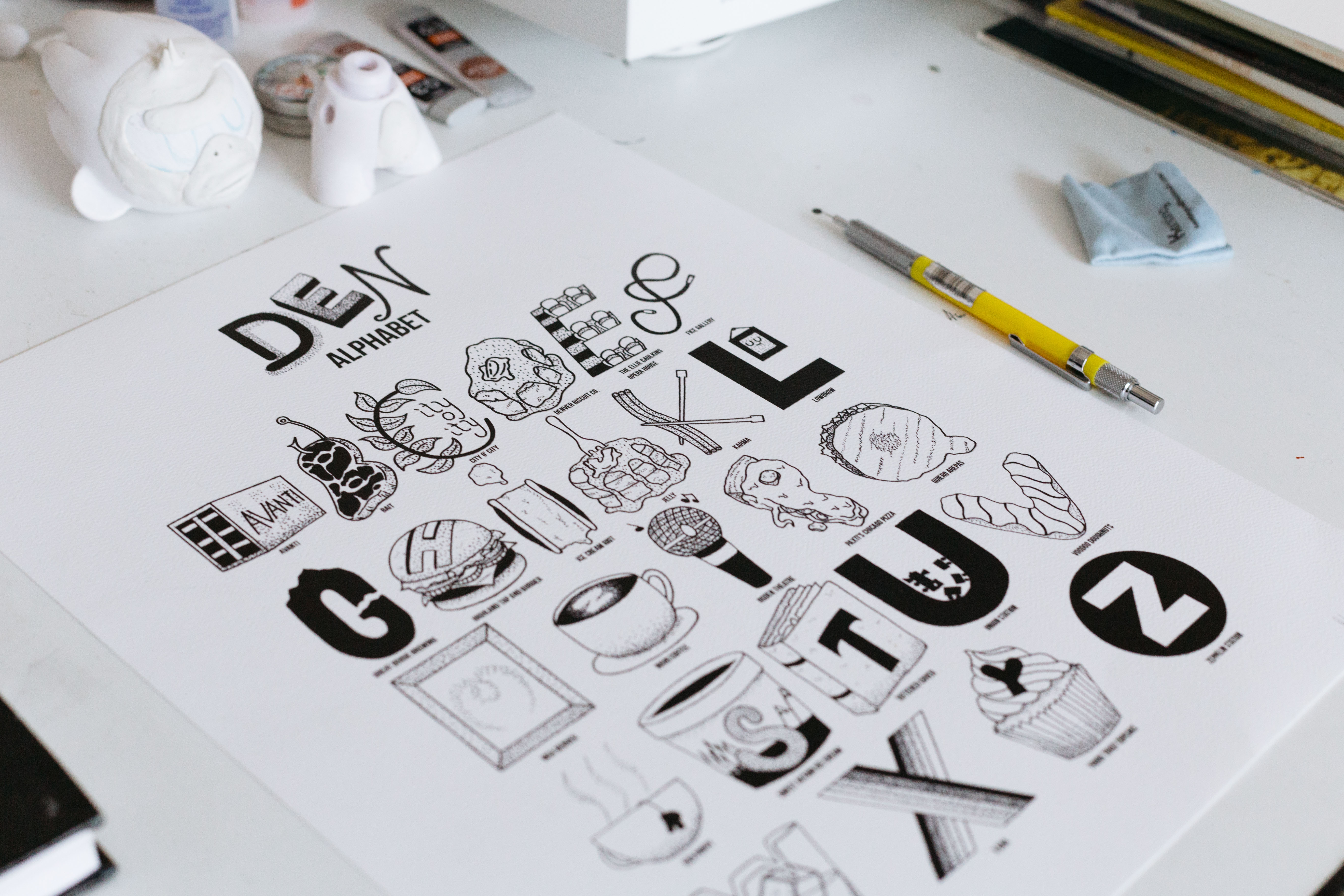 303: How would you describe yourself as an artist?

JD: I don’t like being in the spotlight. I’d rather stand right next to you and watch you experience the art. I like genuine conversations around art — small talk sucks. Some of my color choices are based on eye direction. Depending on how the piece is, I make you focus on certain points with color choice. I direct your eye to a tiny dot in the middle by creating a pop of contrasting color [around it]. I try to do a lot of eye direction [in my painting], just experimenting and watching how people react to it.

303: As a kid, did you color inside or outside of the lines?

JD: I definitely colored inside the lines. Coloring outside the lines made me really mad. I always drew and doodled in church when I should have been paying attention. I hated color pencils so I usually did watercolor and I always kept it inside the boundaries.

303: If you could make a Kidrobot toy for anyone, living or dead, who would it be, and what would the toy be like?

JD: I would make one for my granddad. I’m not sure if he was ever really aware of me and my artistry, but I would want to make one for him. I don’t necessarily know how it would look, but it would definitely attribute to his comedic and ladies’ man nature.
–

–
Draco will present some of his painting and linework at an upcoming show, opening June 1, 2018, at BAIT (1962 Blake Street). The show is titled Due Rent and explores the themes of everyday life — like walking the dog, chatting with neighbors and, of course, working to pay rent.

The Denver Alphabet will hopefully be available at local businesses in the coming months, but for now, check it out on his Instagram.