Edison will bid farewell to the world with a final Colorado show this summer.

The local band has been bringing haunting guitar strums, full vocals and steady drum beats to the ears of fans since they first joined forces with Rhyme & Reason Records in 2016, shortly after the release of their debut EP in 2015. From South by Southwest to performing at the Divide Music Festival, this self-proclaimed “modern folk freak” group has won hearts across the state. And the announcement of their disintegration comes at the start of their summer tour: 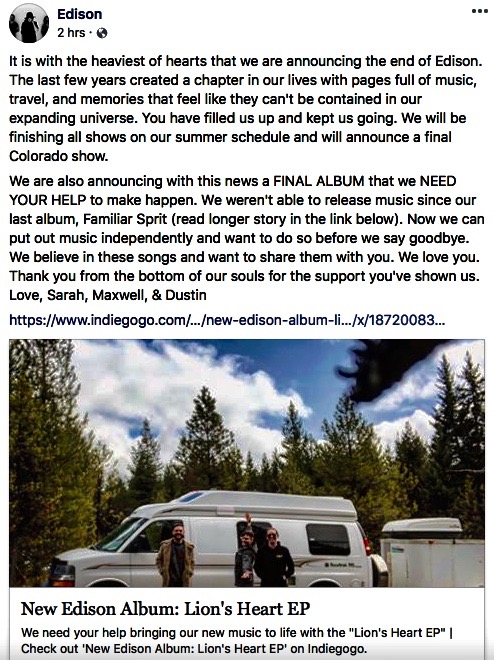 The tour, beginning tonight at Lost Lake in Denver will hit Manitou Springs Wine Fest, Downtown Artery in Fort Collins, Women Rock in Denver’s Four Mile Park and New Belgium Brewery’s Techno Pagan before ending with Mountain Village in Telluride June 22 — and the band plans announce one final Colorado show before officially waving goodbye. In addition to the breakup announcement, Edison is asking fans for help in an effort to raise funds for their final album:

Photo courtesy of Edison via indiegogo

“When it came time to make the decision to close the door on Edison and make this our last summer we all agreed that we really didn’t want to go out without putting out an album,” Explained band member Sarah Slaton. “But [we] also weren’t sure how we were going to make it work. We just don’t have the money to get it done unless our fans a friends help us and we didn’t want to let pride get in the way.”

And while the journey to get their final album released is looking to be a difficult task, the material that they have ready to record will we well worth the effort.

“I feel like it really shows our growth as a group,” expressed Slaton in regard to their material for the new album. “A lot of the first album was songs that I had on my own — it was just Dustin and I. This was the first time that the three of us organically from scratch sat down and put together some songs so these are those babies — songs that the three of us created together, here in Colorado. And I don’t know, it has a totally different sound to it in my opinion.”

While the news of this threesome’s split is difficult to hear, their final shows in Denver and throughout the state will be a welcome finale to their career in Colorado’s local music scene. This won’t be the end of their individual careers in the music scene. Dustin Morris and Maxwell Hughes plan to pursue their solo careers  — and as for Slaton, she has something different in mind. “Music’s not done with me, I don’t think,” said Slaton. “I really want to work on writing for other people. Now I’m going to try and do a little bit more of that, take a backseat from the stage and give a voice to someone else.”

You can buy tickets to their performance at Lost Lake, tonight, May 30 here. Go here to get a taste of their sound before the show. In addition to tonight’s show Edison will play one final show this summer, and though they have yet to set a date or location, they’re aiming for August. For more information on the breakup and to find out how you can contribute to their release goals go here.