Guest WriterApril 26, 2018Music
Photo courtesy of Rainbow Kitten Surprise
Home
303 Magazine
6 min read
The five-member North Carolina outfit known as Rainbow Kitten Surprise (yes, really) rolls into Denver tomorrow to play their brand of rebel-rousing, lyric-driven rock music from their third album entitled, How to: Friend, Love, and Freefall at The Ogden Theatre on April 27 and 28. 303 Magazine hopped on the phone with lead singer, Sam Melo, for a bit to talk dorm rooms, drag queens and lightning never striking the same place twice.
303 Magazine: How did you guys get your start?

Sam Melo:  I’ve been writing music for a while and hadn’t had any successful outings and so I decided to get out of my hometown of Albemarle, North Carolina and go to Appalachian State to be in the throw of things. I came across a fellow guitarist Bozzy (Derek Keller) and we would just play in the lobby of our freshman dorm and show each other stuff we were working on. We came up with “All That and More (Sailboat)” and our friends liked it too and it felt good and we just jammed for about 30 people and got a good response. We recorded the four tracks and dropped our EP at that time and people seemed anxious to hear more. I wrote all during that summer and sophomore year we brought on a couple more musicians from the dorm (Ethan Goodpaster and Jess Haney). Then Charlie (Charlie Holt) drifted into our lives, casually, as he does…and we became a band.

303: What was the inspiration for your latest album and how does it differ from previous work?
SM: This recent album was our attempt to write something a bit more conceptual and cohesive.  The inspiration started out as trying to be autobiographical — to describe that “cat and mouse” game between someone who you’re interested in romantically but aren’t sure how it’s going to go. Once the newness wears off, [you realize] what it’s like actually living with someone and managing a relationship within the contact of the life we lead — a gypsy life. Basically, what is romance in the context of so much distance? Then it became how to manage the dynamic of five people who have been friends but we are negotiating how much is friendship and how much is business. More than anything this album is the story of the five of us. How to: Friend, Love, and Freefall, our first album was a collection of two EPs and our second album was really about writing a bunch of good pop songs, but not too much pop, you know. 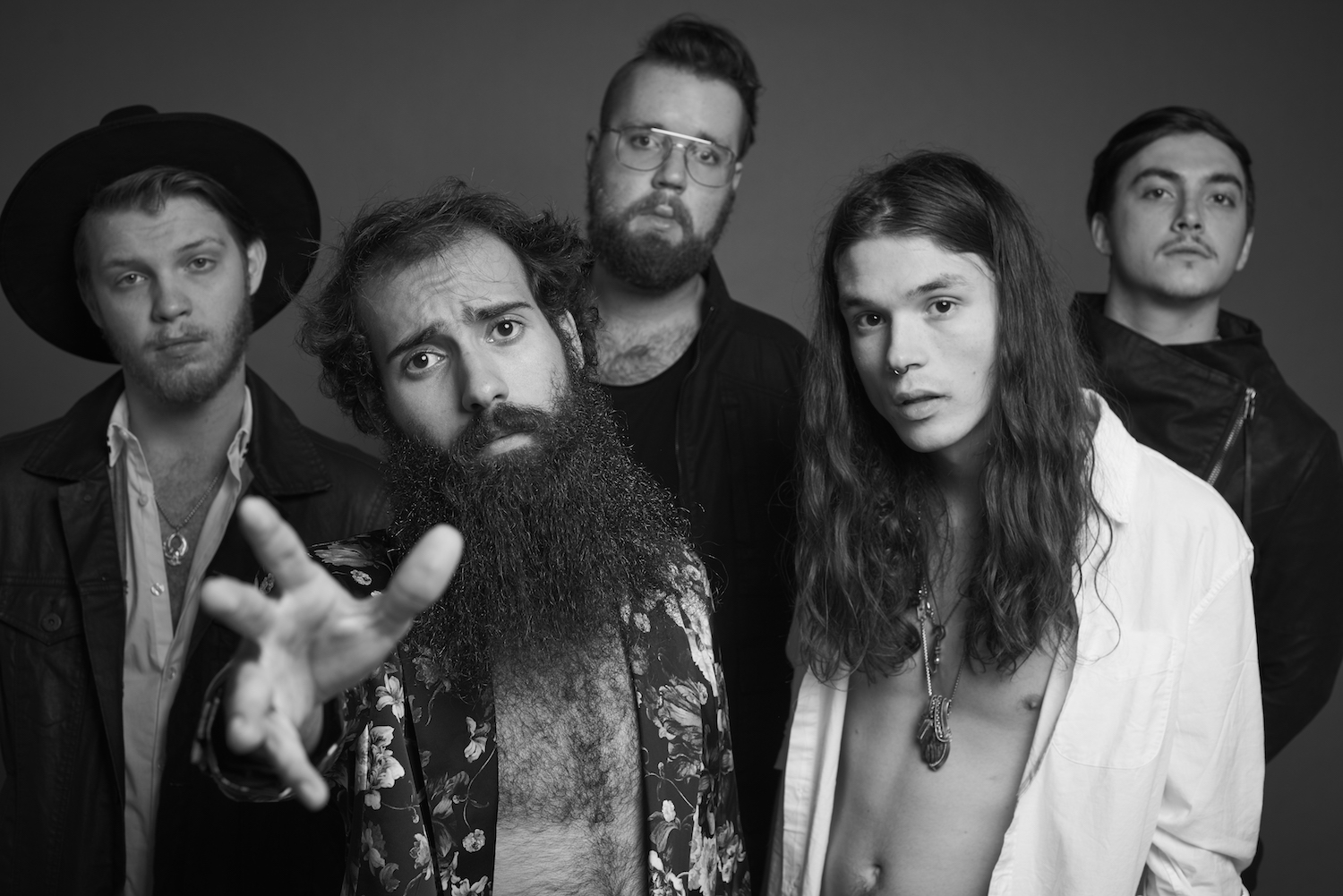 Photo courtesy of Rainbow Kitten Surprise and by Matthew Salacuse

303: How has this album been received? Any surprise fan favorites?
SM: Fortunately it seems to have been received well. I mean, I hear good things on social media. Our friends who have been with us from the start approve of the change in direction and the new soundscape. We hope we made something diverse enough that nobody is going to like the same thing. For example, “Moody Orange” is one of those tracks that people either take or leave. The hope is that lightning never strikes the same place twice. More broadly, the thing I am most proud of is that this album is [that it’s] a coherent piece.
303: The track, “Hold,” was released alongside a very powerful Kyle Thrash documentary about four drag queens coming out to their families. How did this come about?
SM: The label and film director at Atlantic put me on to Kyle Thrash and I watched some of his work before hopping on the phone with him. It only took about 15 minutes of going back and forth before we decided on the concept. My boyfriend had been putting me on to RuPaul’s Drag Race and I liked it so I thought we could go find drag queens and tell their story. Kyle liked the idea and went and found some. I didn’t hear from him for two months and then he called me back and said we are going to be shooting in New Orleans. The song is half the length of the video but I told them not to cut any part of their stories. So, in a way, our song actually became secondary to the art. It is obviously a very emotionally impactful piece. I waited to watch the rough cut with my boyfriend and we sat and watched it and ate chicken nuggets in silence for about 20 minutes. There was just nothing to say. I am patiently waiting for RuPaul to pat me on the back and give me some encouragement.
303: What are your live shows like?
SM: I’d say energetic and theatrical…I hope.  We are always working on quantifying what the experience is that we are giving people but I think there is mostly an experience of seeing us play out on stage — bearing heart and soul. The whole show is about trying to find the most honest projection of where we are right now with the lyrical content and music. Sometimes it’s just an internal thing we do on stage, sometimes we’re just putting on a spectacle with an ironic smirk and sometimes we are sharing in all these emotions with the crowd. We are just trying to find that right zone.

Keep tabs on Rainbow Kitten Surprise on Instagram — @rksbandofficial. Tickets for the upcoming Ogden shows are sold out.

Kate Lacroix is a local music writer who is happiest in summer, riding shotgun with her hand inside a bag of pork rinds and her feet up on the dash. You can follow her on IG @littlelifegreatly