Denver Gents Encourages the City’s Men to Up the Ante

Denver is known for many things, but never has it been considered a menswear destination. Believe it or not, it has largely been judged quite the contrary. Luckily, there are those who believe there is hope for our notoriously underdressed city. Enter Denver Gents — a grassroots collective founded by Delroy Gill and Stuart Crowell — whose noble mission is to create an impact through fashion, hopefully inspiring the city’s men to take greater care in their sartorial choices.

At once a traditional men’s club, a flash mob-like campaign and a philanthropic organization, The Gents have big plans to both inspire and assist the many enterprising men currently hoping to improve themselves. “We are structured as a male organization, so we can create the biggest impact on young gents similar to an organization that has a Big Brothers program,” explained Gill. “We do have public events quarterly that men, women and children can attend, aside from our members-only events.”

Gill grew up in London until, at 17, his family relocated to Omaha, Nebraska to support his father’s career. Immediately alarmed by the drastic culture shock, Gill kept after his father until the man finally relented to a move. The next stop was Denver — the result of a 1998 Yahoo! search for “the best city to raise a family.” Still underwhelmed, Gill returned to London the day he got his green card. After a six-year stint moving back and forth across the pond, Gill permanently settled in Denver 11 years ago. He brought with him a welcomed sophistication that has come to define many of the principals that underpin the Gents’ mission.

Crowell is a Kalamazoo, Michigan native with a business management masters degree from George Mason University. He is a newcomer to the city, having arrived with his wife in 2016. His deep interest in formal wear combined with his ambitious nature, has fueled the fire and driven the Gents’ multifaceted approach.

After meeting at an international real estate conference in Las Vegas last September, the two Sotheby’s agents — bound by mutual love for good dress and sophistication in both business and pleasure — began laying the groundwork. In a few short months, the group has expanded far beyond the founders’ initial expectations.

Their inaugural event, titled “Suits and Sushi” brought a partnership between LoHi hotspot Mizu Izakaya and Denver menswear staple Suitsupply for an evening of handshaking, a great deal of mutual admiration and an expected amount of confusion and intrigue from onlookers. What began as an Eventbrite page for what Gill and Crowell thought was going to be a 15-person dinner party quickly and organically turned into an affair involving 160 registered guests, of which about 75 actually made it through the door. Going forward, the two are planning members-only events each quarter, with public micro-events peppered in at a similar rate. The impressive spectacle that descended on Mizu succeeded in igniting the curiosity of onlookers — a great success for the inclusive group.

Last month the Gents began accepting members into their more formalized club. With various tiers ranging from $50-150 featuring affiliated rewards, Crowell and Gill are hoping to begin developing the philanthropic branch of the organization. With a focus on young gents, the group is hoping to direct all the collected funds to institutions that promote self-esteem building, education and dressing for success. “This truly is a positive group of people that is going to create change,” said Gill. “At our second event, we raised over $3,000 to give to the Porter-Billups Leadership Academy, which will sponsor two young gents’ scholarships through the program.” Membership will also grant access to their exclusive events, including a password-protected Macallan Scotch tasting held at a secret location March 1.

Clubs that aspire to adhere to a gentleman’s code have long been accused of being pompous and exclusionary. Denver Gents have already taken great care to ensure that their group is as welcoming as possible. Anyone with a potential interest is encouraged to get involved, including women who are into menswear. Though membership to the formal club remains men only. 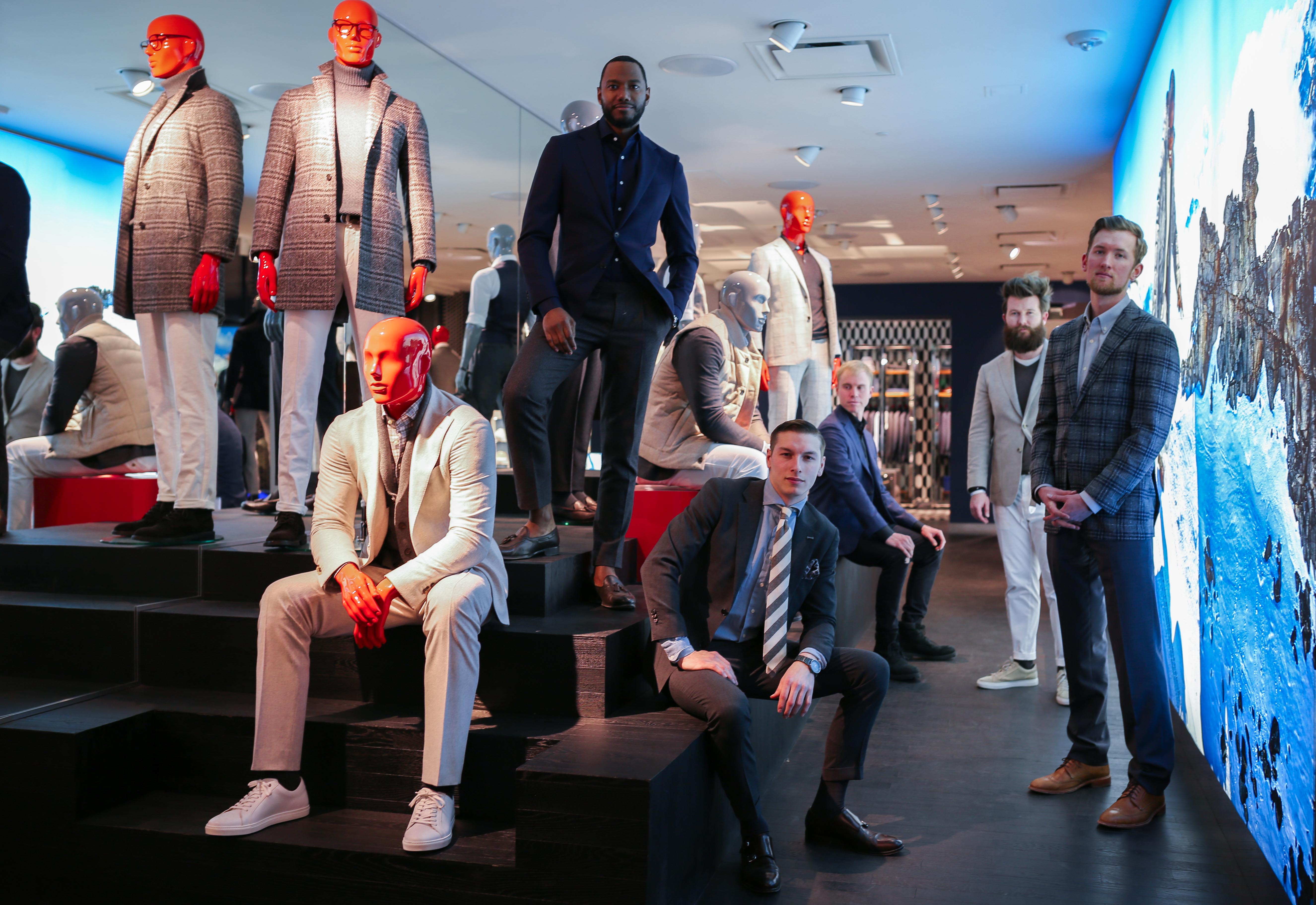 If you’re concerned about showing up to an event underdressed, fear not. The organization will have stylists on hand who will gladly give a free consultation. “Come as you are, this is a place where gents can come to educate themselves,” said Gill. After all, according to both Gill and Crowell, the suit does not make the man, the man makes the suit.

All photography by Danielle Webster at Suitsupply.