Opening October 22 at the Denver Art Museum (DAM) will be an international exhibition of 37 female artists from 11 countries. Called Her Paris: Women Artists in the Age of Impressionism, the exhibit showcases women who worked in Paris in the late 1800s. Some of the artists include Berthe Morisot, Mary Cassatt, Marie Bracquemond, Harriet Backer, Anna Ancher and Lady Elizabeth Butler. These women were not all Parisian, but rather traveled to Paris in order to be part of the mecca of artistic education and production at that time, even when their home countries were more welcoming of women in men-dominated artistic fields. Paris was more than a destination for experiencing art, it was the place to study and master it. The women who made it their mission to become masters in the field of painting did so with the knowledge that most men would be skeptical at best and brutally misogynistic at worst. 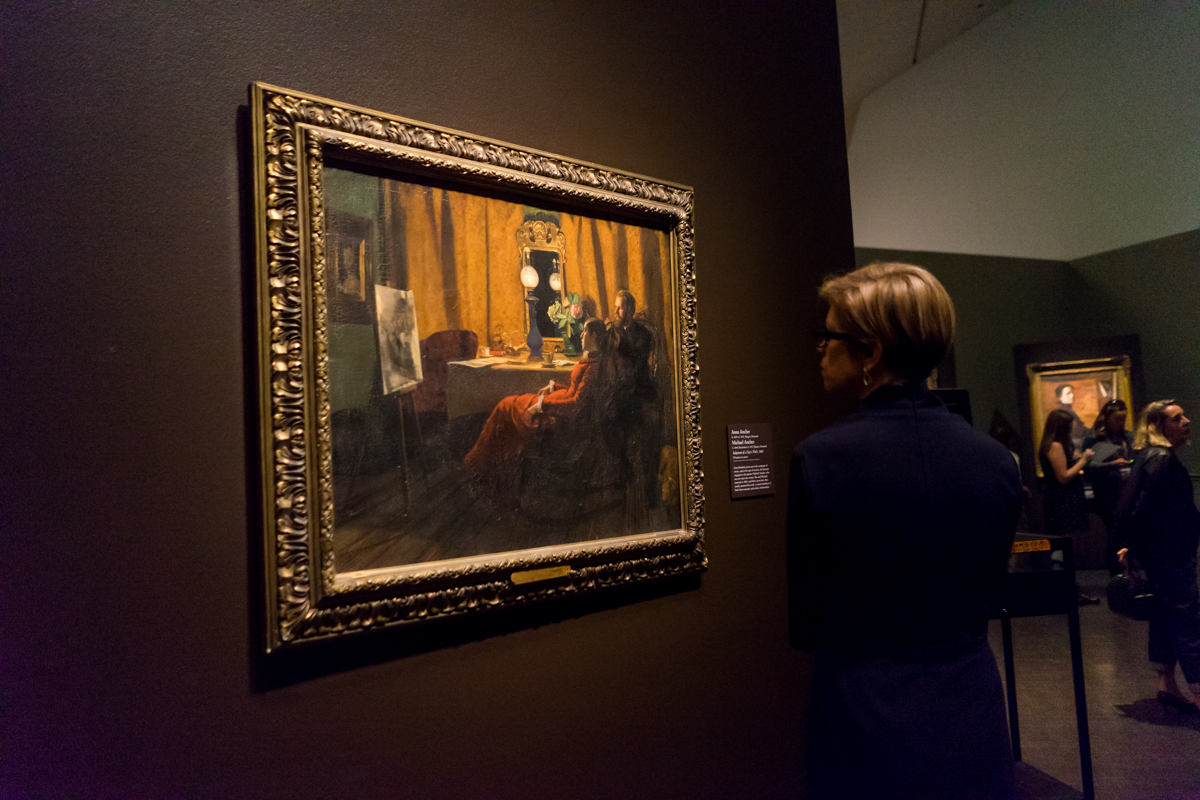 Organized by the American Federation of the Arts (AFA) this exhibition comes a little more than a year after DAM showcased women in Abstract Expressionism— one of their most successful shows— and highlights the fact that women artists after the 1900s owe their credibility to the tenacity of the women in Paris before them.  Though this exhibition has the term “Impressionism” in the title, it is important to note that not all the women displayed are considered Impressionist painters. The reference comes from the general title of that period of time— when male painters like Monet, Manet and Degas were at their height— which is essential to understanding the exhibition because so much of the challenges women faced were contextual to that time period. 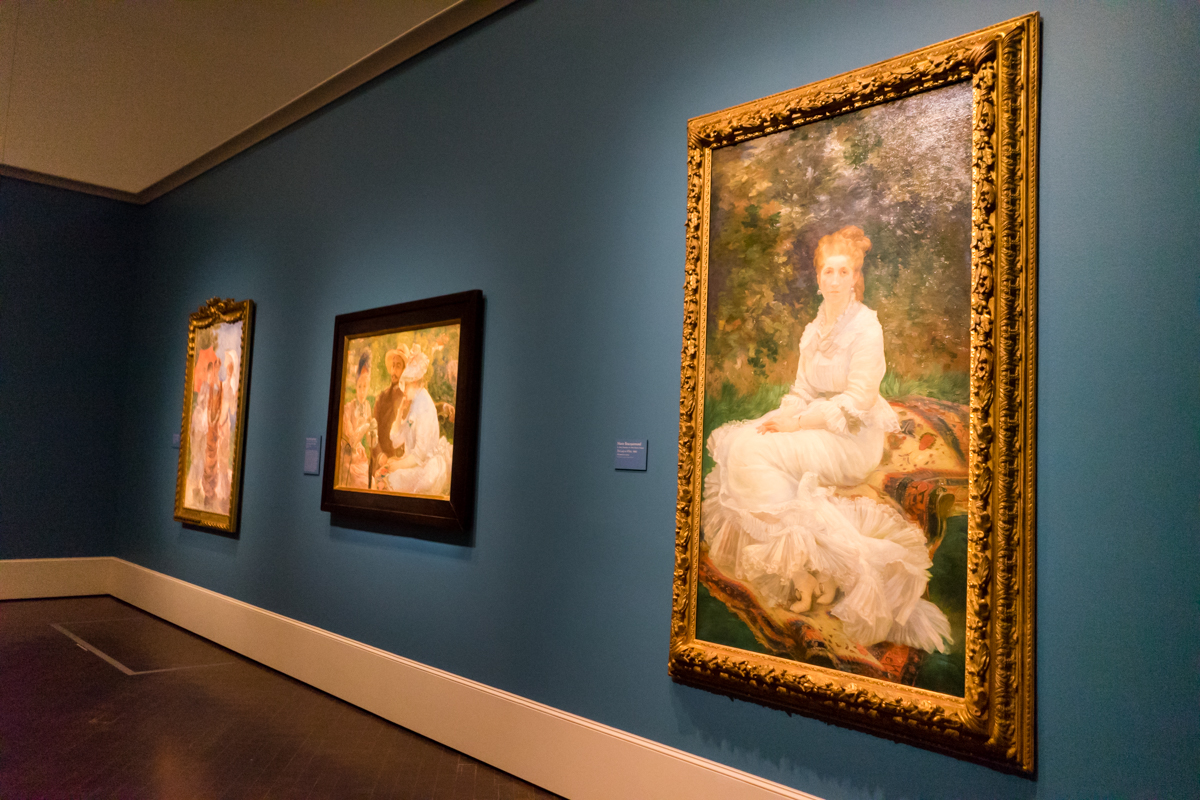 Paintings in “La Parisienne” portion of the exhibition

Anjelica Daneo, the curator of painting and sculpture at DAM said, “this exhibition is not about skilled amateur endeavors, feminine genres like fan painting or ceramics, or a result of something made as a hobby in their free time. It is a showcase of masterworks, of women who devoted their lives to learning how to paint like the masters.” The show contains more than 80 paintings, from the size of a piece of letter paper to the half-wall-epics of “historical paintings.”

Laurence Madeline, the curator of Her Paris and the chief curator for French National Museums, said of the exhibition, “I always consider the shows I curate like stories. Stories of the art, of the artists, of the museums. This show is especially a story of the ladies inside, who through their own path and passion overcame obstacles to be an artist when it wasn’t so easy to be one. It’s a pleasure to finally see all the paintings together after nearly a decade of organizing and selecting them, to see how the stories weave together visually, too.” 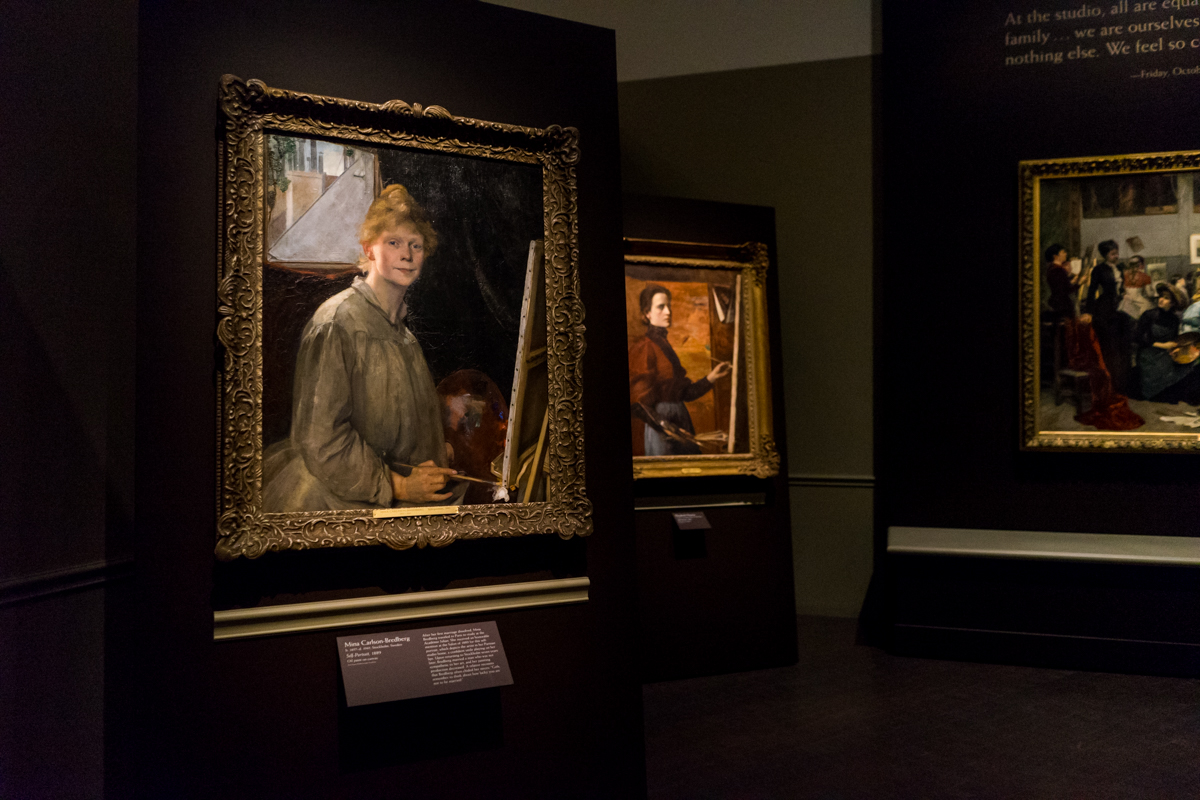 Paintings in “The Art of Painting” portion of the exhibition

Once inside the exhibition space on the second level of the Hamilton Building at DAM, it’s obvious that storytelling is a major part of the show. With temporary walls built so that viewers must wind their way through each gallery—much like the narrow streets of 19th century Paris— and large printed photographs revealing the contextual history surrounding the women painters, the exhibition immediately sets a certain atmosphere to experience the art within. Divided into seven sections— The Art of Painting, Women’s Lives, La Parisienne, Picturing Childhood, A Modern Landscape, The Question of History and Jeunes Filles (Young Women)— viewers will be educated while they appreciate the truly fantastic pieces of artwork that came out of women in Paris from 1850 to 1900.

There is almost as much education in the show as there is art. From learning about the exclusion of women from the École des Beaux-Arts (Academy of Fine Arts), to the need for finding models in everyday life rather than practicing with nudes, to the exclusion from painting outside— “en plein air,” a style their male contemporaries were avid about— and  the idea that large-scale canvasses were too physically demanding for the ‘fairer sex.’ Though these struggles may seem far away for most women experiencing this exhibition, the reality that similar attitudes continue to prevail in other places and in other iterations makes the show timely, despite the dates on the paintings. 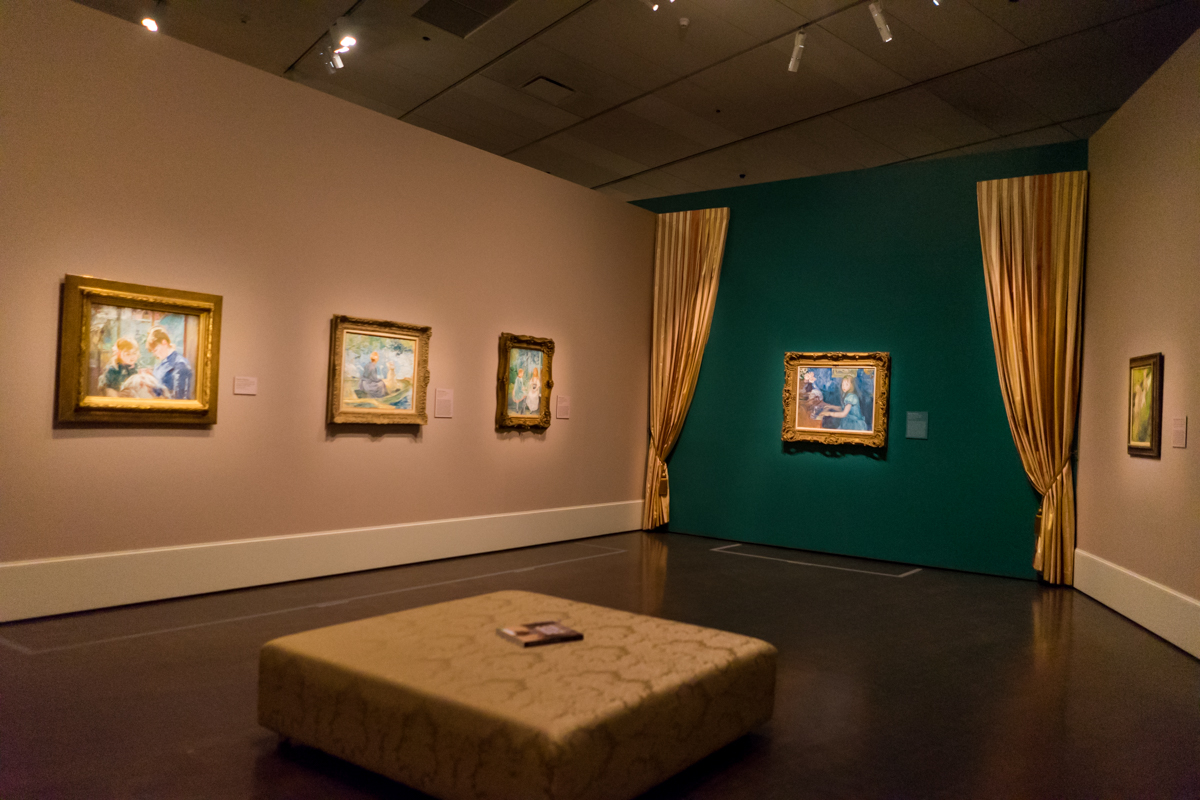 Paintings in the “Picturing Childhood” portion of the exhibition

Though it would be worth while just to see these artworks, there is an opportunity to entrench yourself more into the context of the time with a lounge that features voice recordings read from the painters’ diaries. Most of the women were constant chroniclers along with their painting careers and their testimonies are emotional and informative. Hearing the first-hand accounts of what the women were challenged by will illuminate the impressive nature of what they managed to accomplish despite it all. Quotes like “I must do very, very well if I am to make it so far from home,” written by Elizabeth Gardner Bouguereau, remind us that these women were upending more than the artistic establishments — they were forging new paths in the familial and economic establishments as well.  These establishments, at the time, were not tolerant of independent and driven women, which were both qualities the women artists during the age of Impressionism unanimously shared. 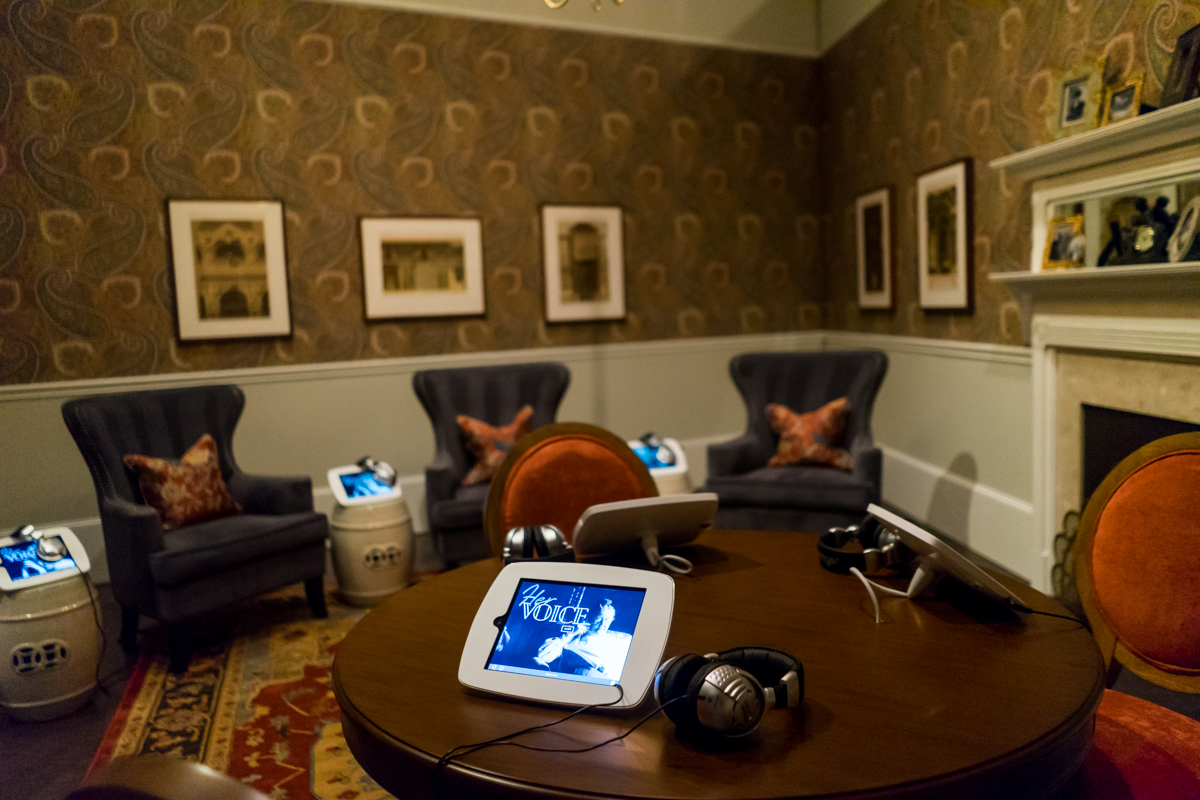 Through the division of the seven sections of Her Paris, viewers will come to a deep understanding of why these women were so pivotal in art history and why their names should be known alongside their male counterparts. Do not go expecting to see “girly” portraits, either. Though there is a feminine quality to the paintings, it is delivered through the delicate balancing of inner struggles and outward appearances, shadows and light rays. These women were overcoming more than mastering painting techniques, and even with the obstacles in their way, the standards placed on them by others, the taboos they were forced to commit, they persisted. 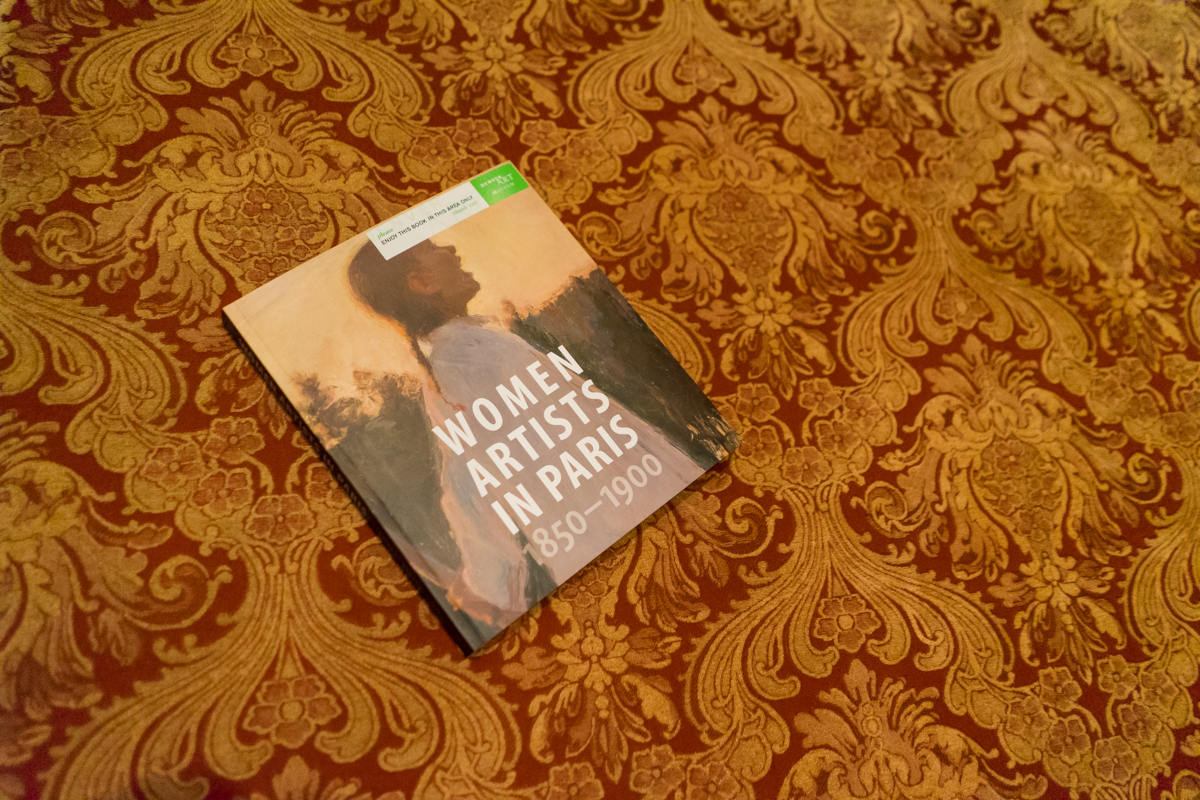