Review – Paramore Turned Bellco into an Epicenter For Hard Rock

The Bellco Theatre is not one of the potential venues that come to mind when you imagine where an alt-rock show would occur in Denver. This did not stop Paramore from turning a theatre used for Ted Talks and comedy shows into a safe haven for rock music. From the visuals to the set list Paramore checked all the boxes of a stellar performance when they brought “Tour Two” to Denver. A massive square lighting rig hung over the stage with individual lights aligned in the shape of a target on it. The lights bounced around the venue giving the show a theatrical element that mixed well with the heavy riffs of the band.

Paramore amplified The Bellco with heavy distortion and confident energy. The band performed like the touring veterans they while also playing with the excitement as it if was their first show ever. The mix of the show was perfect for the element they were in. The drums were punchy, the bass was thick and the vocals were crystal clear. Each member of the band acted as individual puzzle pieces that added to the picture as a whole. 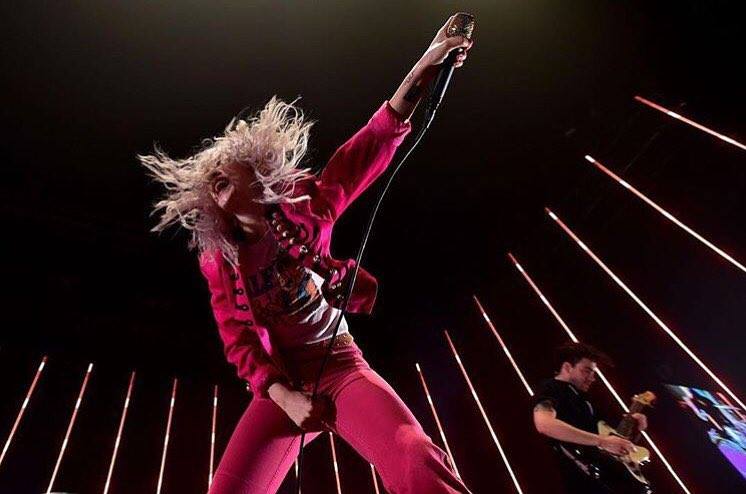 Photo of Hayley Williams courtesy of Paramore on Facebook

Paramore has undergone multiple personnel changes over the last seven years. In 2010, founding members Josh and Zac Farro left the group due to inner strife within the band. In 2015, the band parted ways with longtime bassist Jeremy Davis after more inner strife. Williams spoke honestly about the band’s rocky history, “It’s been a wild ride with Paramore. If you’ve hung out with us for any length of time, you know.” Williams’ performance spoke even louder. Despite their various changes in the lineup, the band proved their music can live on for decades. Original drummer Zac Farro rejoined the group in the beginning of 2017 and executed his drum portions as if he never left at all.

Williams commanded the stage with her vocal talents in a way that could be compared to Joan Jett or Christine McVie of Fleetwood Mac (who they paid tribute to with a cover of “Everywhere”) — she’s a fucking badass. She was headbanging, jumping and dancing while still staying on key throughout the entirety of the set. The energetic rockstar exhibited immense amounts of humility while performing and when she talked to the audience before her. Williams addressed the Denver crowd as if we were close friends with the band. She spoke of friendship and gratitude in such a pure way. Paramore’s long overdue return to Denver strengthened the anticipation of the show as a whole.

The Tennessee rockers’ last performance in Denver was almost three years ago at Red Rocks, and Williams apologized for their absence even though there was no need to. During Paramore’s encore set, Williams introduced Zac Farro to the front of the stage for the most selfless moment of the evening. She informed the crowd that Farro performs in another band, HalfNoise, and is unable to tour with his band when on the road with Paramore. Williams took the spotlight off of Paramore to recognize her longtime friend and Farro hopped off of the drums, taking center stage on vocals as the band performed one of HalfNoise’s songs.

From “Misery Business” to “Hard Times,” Paramore took us on a trip through their discography. We came into the show not knowing how the unlikely venue would affect the rock performance. We walked away with our ears ringing and still singing the songs we had just heard. We’d like to see Paramore headline Red Rocks again the next time around and are crossing our fingers they will be on the list in the years to come.