“I’ve always wanted to come here,” said the Saturday Night Live writer and Weekend Update co-anchor to the audience at the Comedy Works in Downtown Denver this past weekend.

“The other location’s in Utah,” Colin Jost joked, referring to the other Comedy Works South venue at The Landmark in Greenwood Village. “There’s more stone here [in this underground basement] than the pyramids.”

With a pale ale in hand and a preppy gingham shirt on, Jost himself looked just about as white as the audience. He mentioned he wished Leslie Jones (SNL cast member) was here to yell at them. Jost started his set making fun of Coors Light and its marketing campaign that it’s “the coldest.”

Their slogan should be “Coors Light — it’s what pee drinkers drink when they’re not drinking beer.”

Jost, who is a Harvard graduate and former president of the Harvard Lampoon, has been behind the witty, satirical writing of Saturday Night Live since 2005. But it wasn’t until recently that he graced the television screen after replacing current Late Night host Seth Meyers to co-host a segment on SNL called Weekend Update opposite Michael Che. 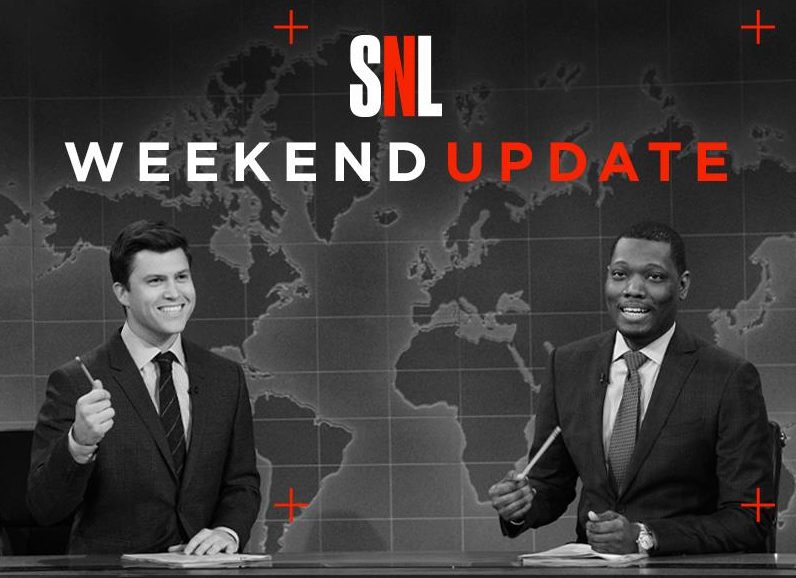 Although SNL is currently on its summer break, Jost has been keeping busy, touring across the US and Canada to mark comedy venues off his list. He doesn’t mind the workload, but he took time in Denver to party and smoke a bit — saying he came up with some unique comedy while he was entertaining Mary Jane.

“When Bob Marley was in college, what poster did he have in his dorm?” and “Do you think the KKK went to the first-ever White Castle restaurant and on the way were like, ‘This is everything we’ve ever dreamed of’?” were just some of the thoughts Jost had time to reflect on.

He was also interested to know if the audience was experimenting with dating apps. He joked that Hinge sounded like it was for carpenters and then added it sounded too fancy.

“Another mint julep! Hinge, son, is the stable where we keep the horses,” he said.

Jost added to the laughter himself when he told the audience, twice, that one time he went to Party City at 2 a.m. and the place was dead. Then he segued into talking about Donald Trump.

Saturday Night Live is experiencing one of its best seasons in over a decade and it’s largely due in part to the mockery of the president himself.

“Have you ever noticed that he says something, and then when someone asks him, ‘Did you say that?’ he says, ‘No, I did not,” Jost asked the crowd.

“I’ve never seen that man before!” Jost offered in his best Trump impression.

Jost also told the crowd he believed that right now it’s harder to be liberal than conservative since there are so many angry activists that aren’t open to alternatives. Luckily, it doesn’t seem like Jost himself is willing to censor his jokes, but at the end of his set, he did share some of his favorites over the years that — for certain reasons — weren’t allowed to air. One of his favorites was a sketch he wrote for when Trump hosted the show about a commercial parody for learning Spanish through Rosetta Stone. Trump was teaching phrases such as “You’re gonna build that wall.”

Overall, Jost doesn’t seem concerned about being touchy with politics. The worst critic so far has been the guy who does closed captioning for the American Federal Communication Commission (FCC), he joked.

One time Jost was watching an episode of SNL without the volume in a restaurant and learned that in one of his segments the caption read “[mild laughter].”

Lucky for Jost, there was no mild laughter this past weekend.

You can catch the comedian when Saturday Night Live returns next month, or watch his special, first-ever Weekend Update Summer Edition for the next four weeks starting this Thursday, August 10 at 7 p.m. Mountain Time on NBC.