You might’ve played darts at a party, but there is a whole other pastime that’s made its way to the Mile High City straight from our northern Canadian neighbors. Bad Axe Throwing originated outside of Toronto in Burlington, Ontario and is now considered the largest urban axe-throwing club in the world. Denver is the fourth American city for Bad Axe Throwing to set up shop and share this Canadian backyard game with its locals. This weekend, the new location, at 845 East 73rd Avenue in north Denver off I-25, had an open house where participants got to practice axe throwing for free in a no judgment zone. Lucky for you, I got to throw the sharp blades around and give a first-hand rundown on the experience so you know what you’re signing up for. Bad Axe Throwing in Denver is officially ready for business, so spend a couple hours like me and kick axe.

First you need to learn how to throw. Once you arrive, your group (or just you) will be instructed on the proper technique for axe throwing by an on-site coach who will make sure you know what you’re doing before you throw. And the technique isn’t hard to pick up on. People that chop wood are actually not ridiculous when they lift the axe over their heads. It gives you more momentum and makes you feel like a badass. After placing your hands firmly on the handle (doesn’t matter which hand is on top), step one foot forward and swing the axe behind you (blade up). As you swing the axe to face in front of you, keep your arms straight and let go when the axe is at eye level.

This is the hardest part according to Nick Jahr, “axe master” visiting from Indianapolis.

“The hardest part is following the motion that we teach you. In most sports like basketball and baseball, you’re told to flick your wrist. This is the opposite where most of it’s like a forward motion. You just throw it nice and straight.”

After you let go of the axe, hopefully the axe will spin on its own and land with the blade stuck in the wooden board earning you one, two, three, four or six points (if you hit the bullseye) with extra points if you hit either of the two blue dots in the top left and right corners. Continue throwing your axe to play a game against an opponent throwing beside you and keep score (I would like to note that I defeated my boyfriend, so strength is not always a winning factor).

Prices to play range from $20-35, and if it’s your birthday you play for free. Also as an added perk you can bring your own food and drink at no extra charge.

Are the Axes real?

Yes, they are real — which, depending on where you grew up, might be a foreign feeling to you. It’s heavy, but not too heavy, but the scariest part is knowing that you could easily do some real damage if the thing hits something it’s not supposed to. Throwers may choose one of two axe sizes (the smaller one is harder to hit) and cannot bring their own axes to throw. This is some real Paul Bunyan-type stuff. But it’s nice knowing you’re partaking in some Hunger Games warfare strategy that might help you win in a battle to the death if it came down to it. So explore your inner lumberjack and get swinging. 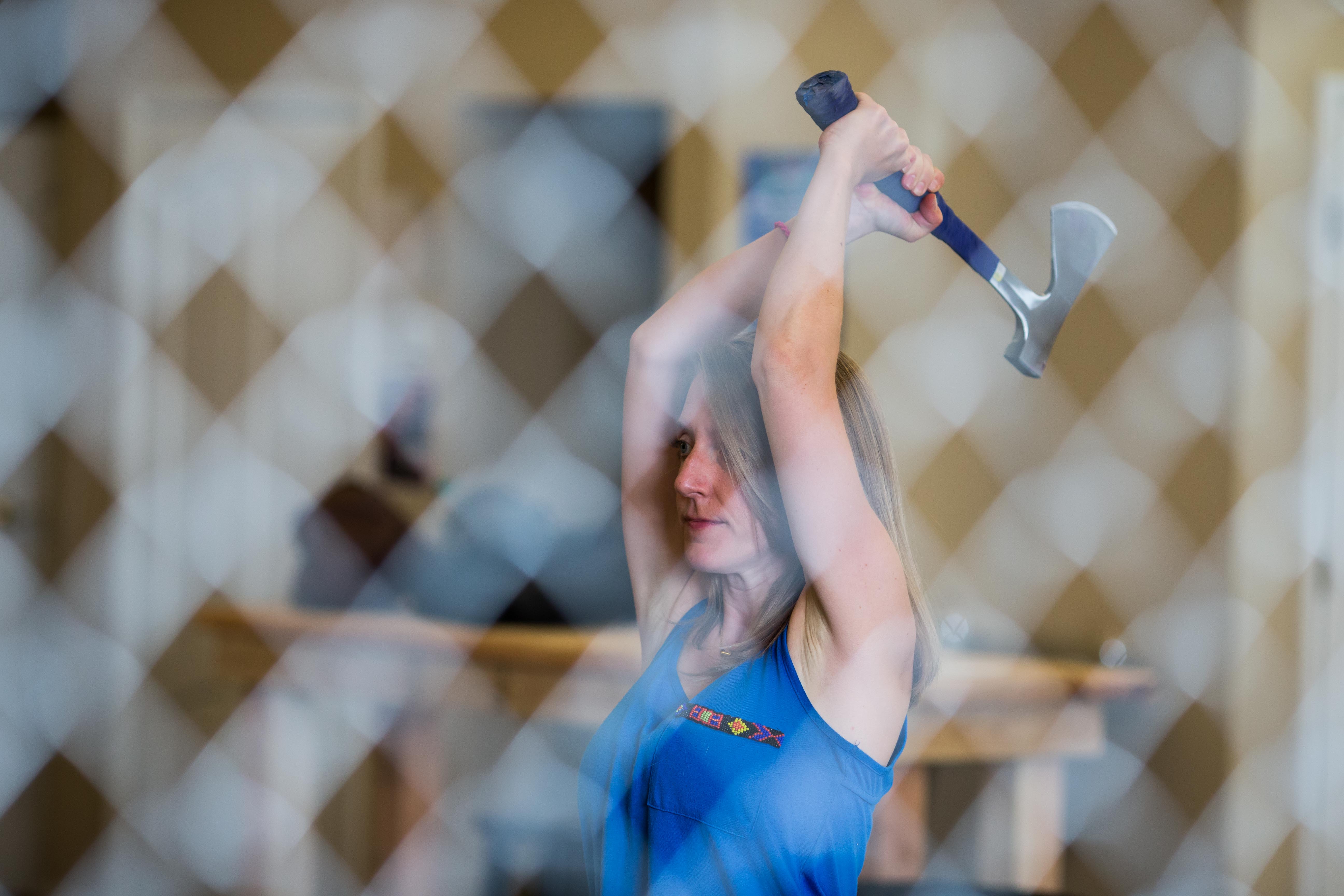 So what about accidents?

According to Bad Axe, there haven’t been any (thank, god). Jahr explained you’d have to be really unsafe to cause any damage. The only requirement for axe throwing is that you wear close-toed shoes (so you don’t accidentally chop off those little piggies).

“We train you in a way that you can’t hurt yourself. There have never been any accidents in the company since I started working here. It’s very safe,” he said.

“You’re throwing the axe away from you. Realistically the only way to hurt yourself is if you do something really silly. There’s a coach on-site with you that will be watching your group to guarantee no one is being dangerous.” 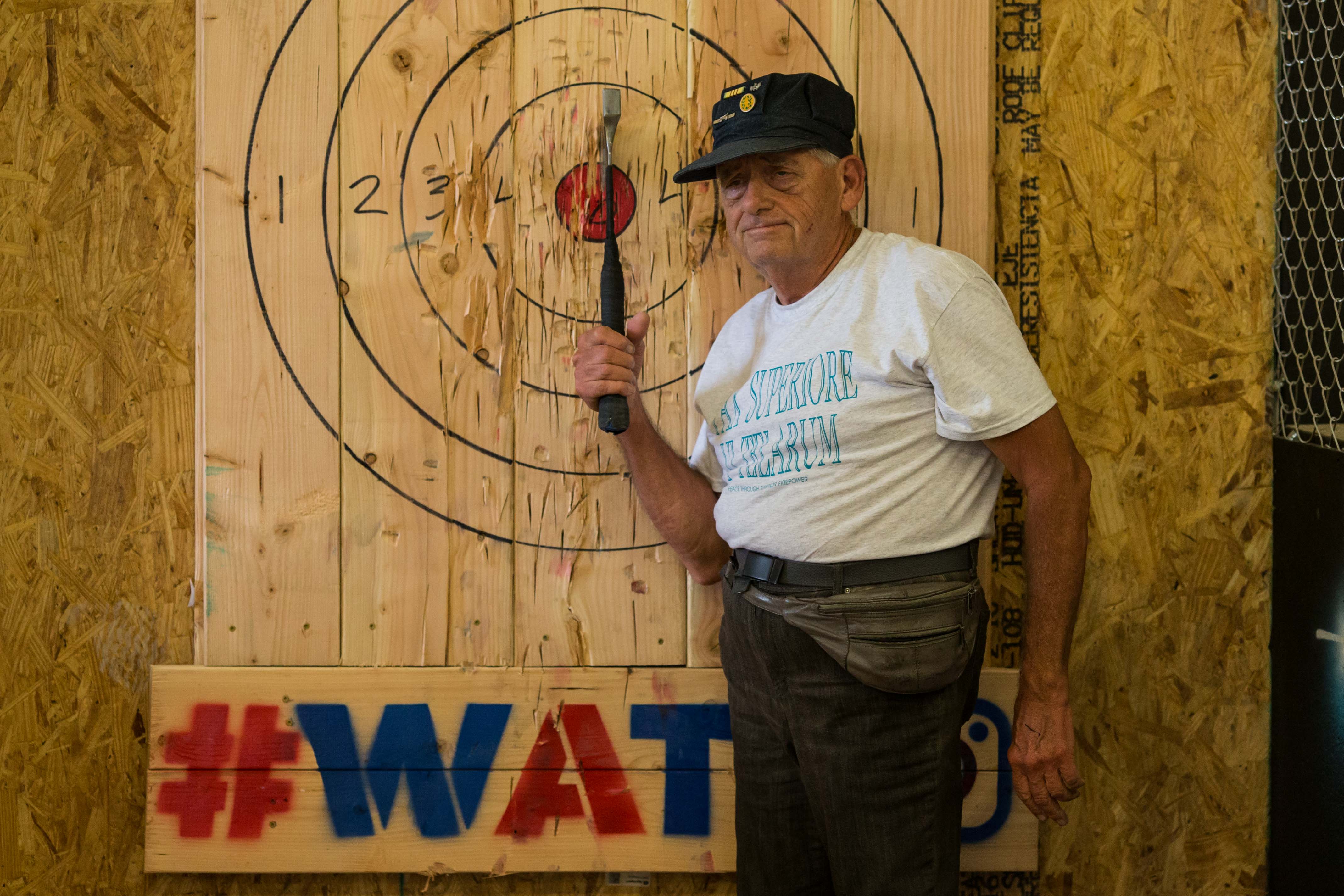 When asked how he got so good at axe throwing, he replied, ”You gotta do something 10,000 times to be good at it, kid.”

Why you should try it

Apart from feeling badass, you learn a new skill. How many people can say they frequently go axe throwing? It’s a cool party trick to show friends outdoors (in a safe environment) and you’ll have a lot of fun blowing off some steam.

“It’s fun. It’s a great stress-relief. By the end of the day if I’m frustrated or angry, I throw a couple axes before I leave and it’s a very good way to go home,” Jahr said.

“I’ve never had a group go home disappointed with the experience. Everyone should try it.”

Bad Axe Throwing is located at 845 East 73rd Avenue, Denver. You can book or learn more about the business here.