Taylor SienkiewiczJune 5, 2017Lifestyle + Culture
Electric Forest 2013, an installation by inflatabill who will be at Creatura Psychedelica. Photo courtesy of inflatabill on Facebook.
Home
303 Magazine
20 min read

This week, celebrate your mother earth. With World Environmental Day, a dance performance by Julianne and Derek Hough inspired by the elements and the GoPro Mountain Games, show some love to the earth whichever way you interact with nature. Denver also has plenty of art, comedy and varying performances this week from ballets to plays. Experience the World Cup qualifier, a girl’s night out complete with drinks, dinner and Dirty Dancing, or the Summer Art Market. Get out there and enjoy this beautiful and fun time of year. 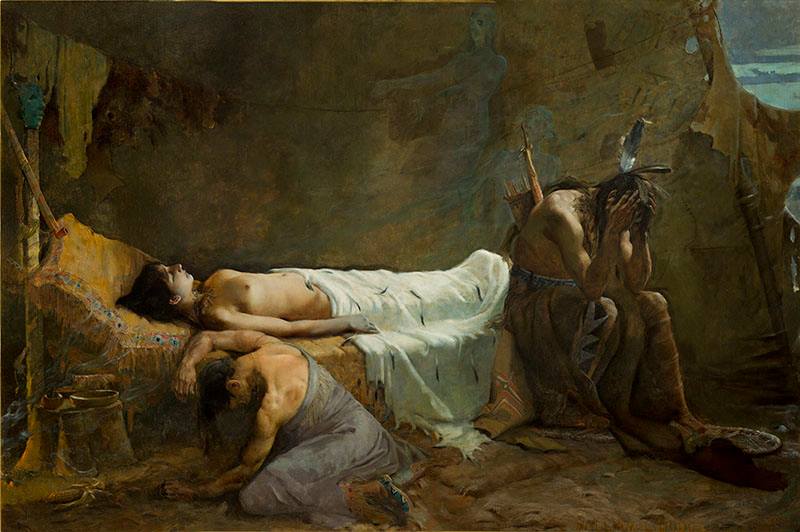 Photo courtesy of The American Museum of Western Art on Facebook.

The Lowdown: Gaining recognition for his art at a young age, William de Leftwich Dodge’s canvas from when he was 19-years-old is one of the largest paintings in The American Museum of Western Art. The young Leftwich Dodge lived and learned in Europe going to art school, learning from peers and mentors and creating paintings that only increased in popularity. Listen to this hour long lecture about Leftwich Dodge while you interact with his works and the stories behind them. There will be a Q&A segment with the museum guide at the end of the lecture. 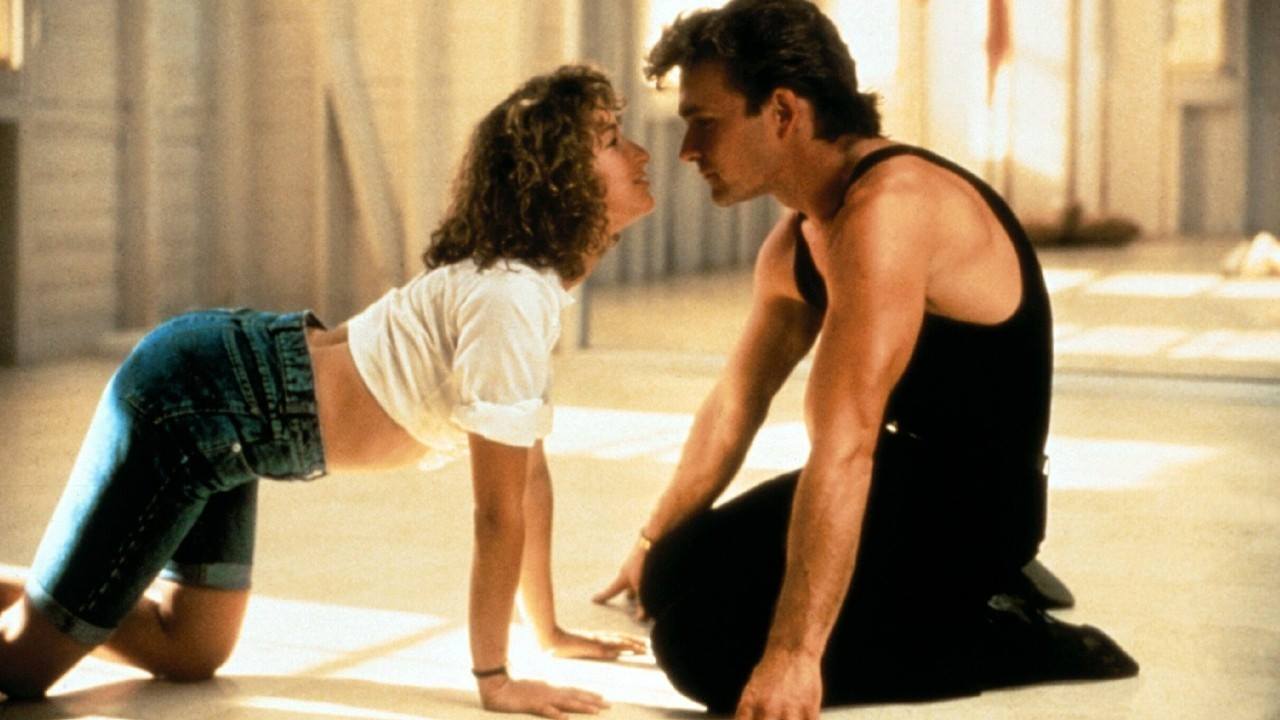 The Lowdown: Get ready for another round of Film on the Rocks with the ’80s classic — Dirty Dancing. This year is the 30th anniversary of this fan-favorite film, so get ready to live vicariously through Baby and Jonny’s Catskills summer. LOLO and Natalie Tate will get the night started with tunes at 7 p.m., then grab some snacks, bought or brought, and settle in to watch your favorite iconic dance scenes as soon as the sun sets.

The Lowdown: Have you ever been to a magic show and think, if you could just get a closer look, maybe you’d be able to catch the trick? Mile High Magicians Society is bringing in six of the best sleight-of-hand artists in the state that will let you do just that. See these magicians perform up-close for their seventh annual show, daring you to call them on their illusion. 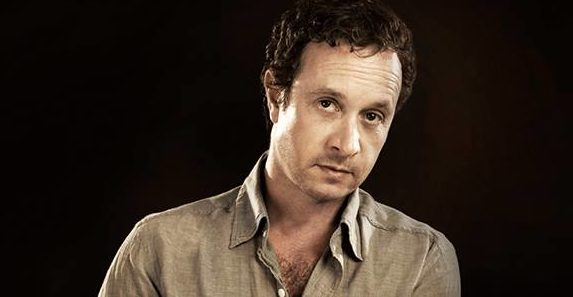 The Lowdown: Pauly Shore’s big break came in 1990 with his hit show Totally Pauly, which led to his starring roles in Encino Man, Son In Law, Jury Duty, In the Army Now and Bio Dome. A true jack of all comedy trades, Shore has also released an album, podcast, shows and documentary. Catch this versatile comedian to put some giggles in your Monday night.

World Environmental Day – Pints for a Cause

The Lowdown: It’s World Environmental Day, so show your mother earth some love at Pints for a Cause. Join EnviroHub and Solar City to talk clean energy and recycling. Enjoy music by Emma Mayes & the HIP and beers by The Brew on Broadway. Every pint you drink will put $1 towards EnviroHub’s missions, which to educate the public about environmental issues through schools, public spaces and businesses, as well as enable people to do something. 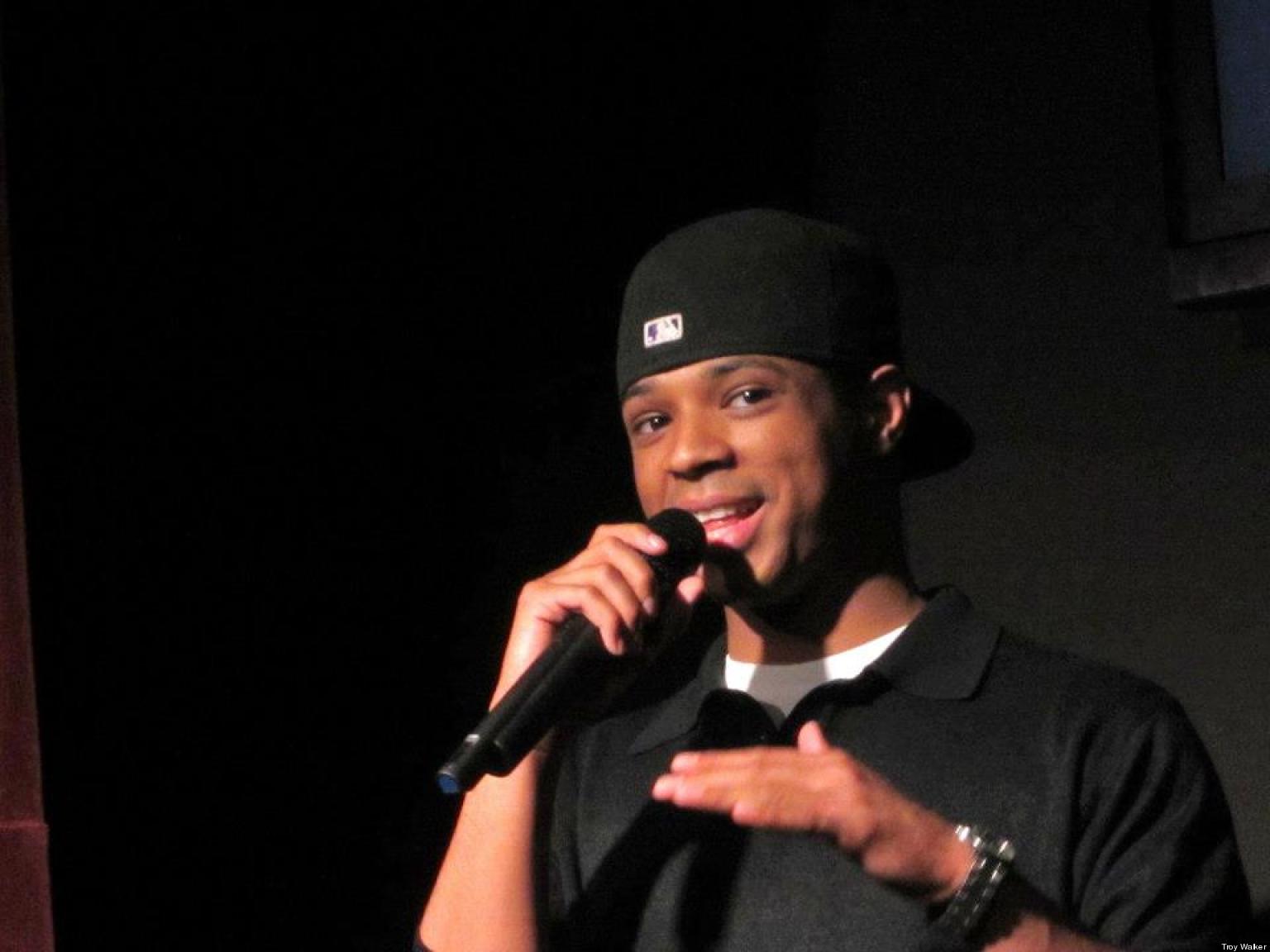 The Lowdown: Local legend and graduate from DU’s College of Law, Troy Walker, hits the stage in Denver this week after coming off of several local and national comedy festivals including The Aspen Rooftop Comedy Festival, The Great American Comedy Festival and Portland’s Bridgetown Comedy Festival. You may have seen him in VICE’s Flophouse or as “Don Lemon” on Fusion TV’s Trump vs. Bernie. While working on his next project as a star in Fuse’s Uproarious, this hometown hero is here to give his assertive comedy live. 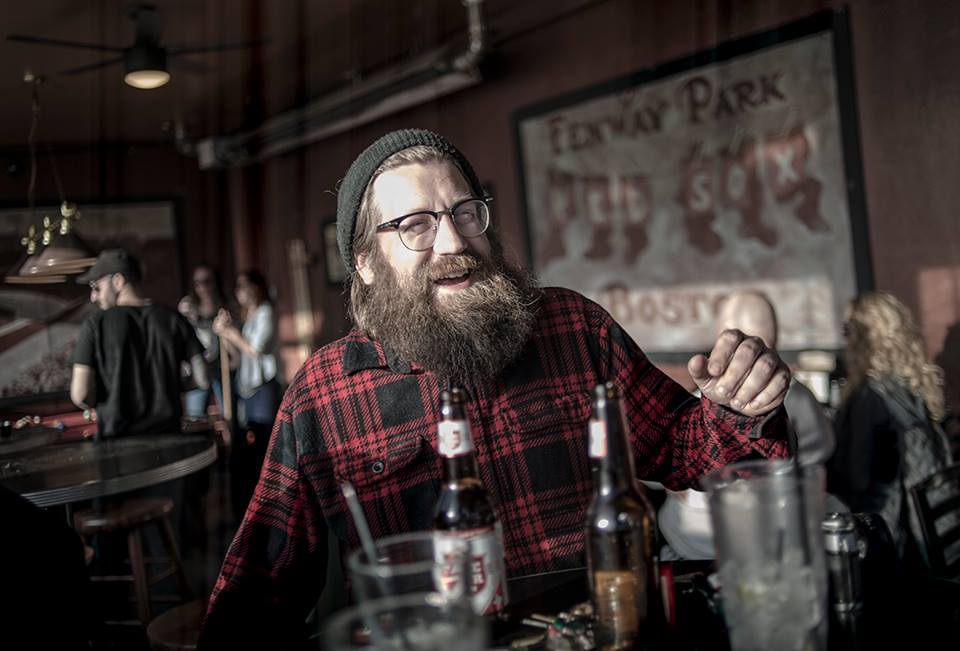 The Lowdown: Multi-faceted Scott McCormick is known as a designer, musician, “Office Hours” host and squirrel wrangler. Hear from this interesting man from whom you may have heard his music, seen his photography or worn one of his t-shirts. Walk through his artistic processes with him and see the world how he does.

Reading and Signing with Grant Snider 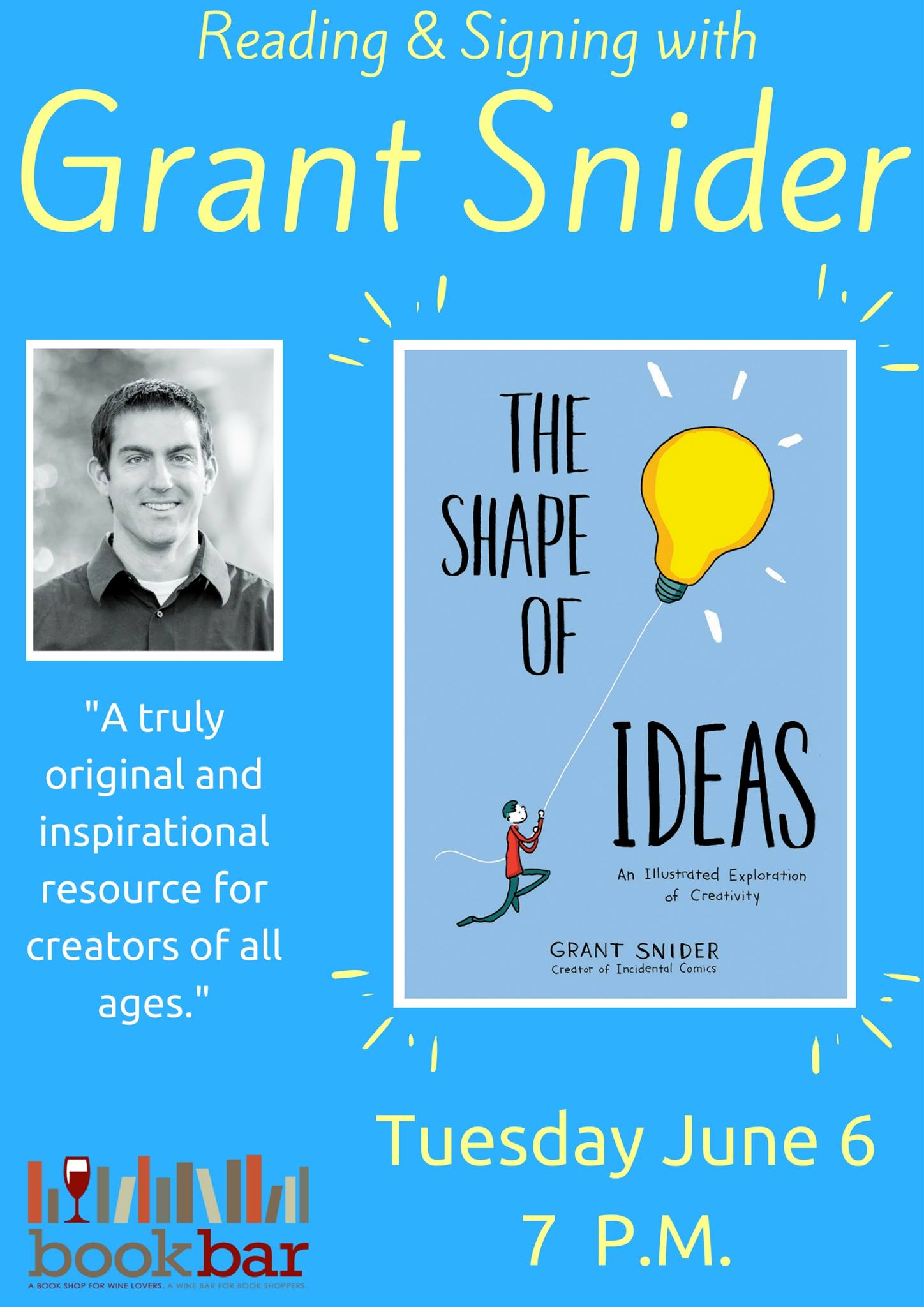 The Lowdown: Grant Snider, author of The Shape of Ideas, will be at BookBar to share some of his favorite excerpts from his book as well as sign your copy. The Shape of Ideas isn’t your ordinary book. It’s full of colorful illustrations and prompts the reader to think for themselves about ideas and where they come from. Be inspired to form your own ideas and put them to use as you sit before the author himself. 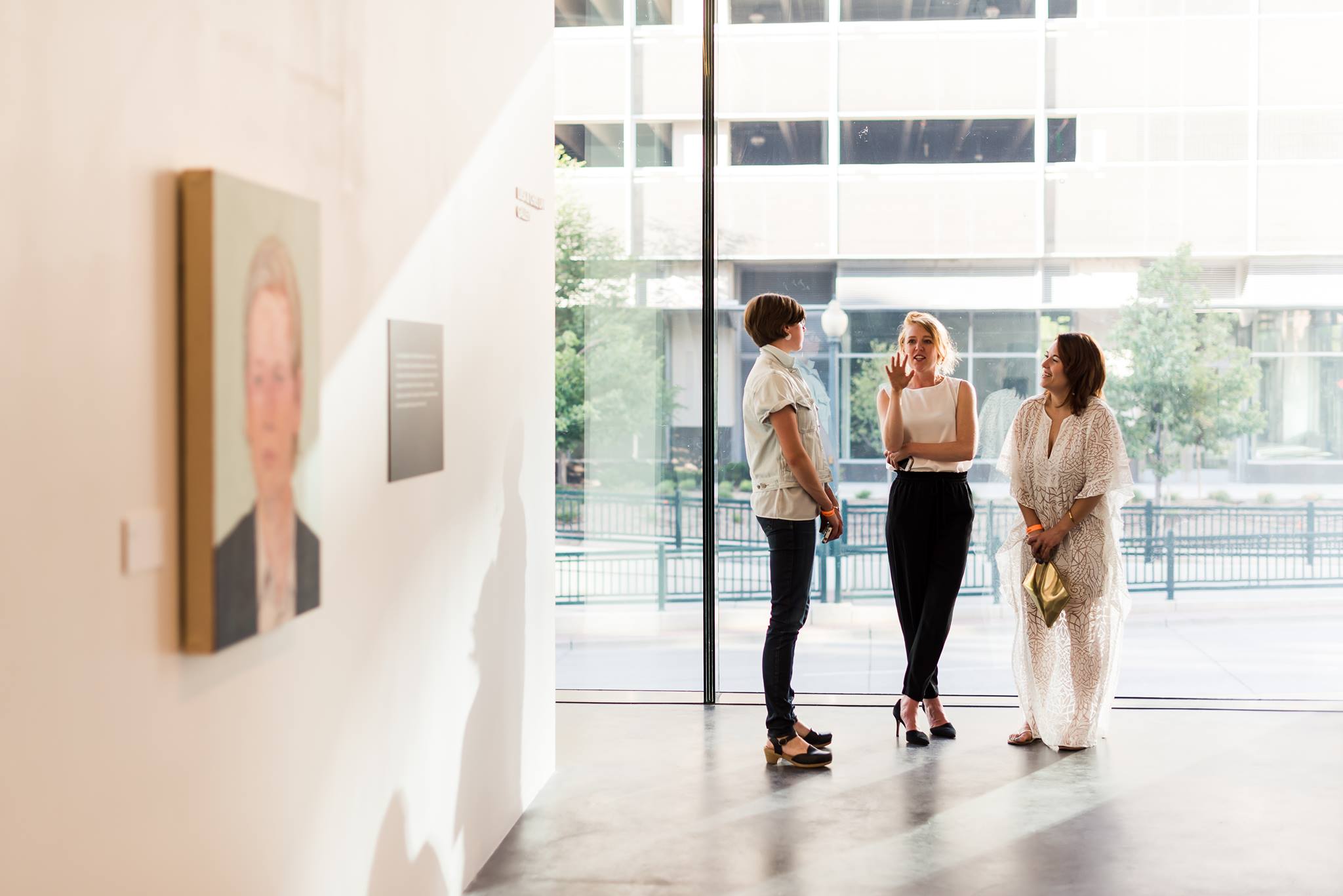 The Lowdown: Take a close look at the backstory of the art in museums. Guiding you through the things you don’t usually see is curator Zoe Larkins who curated Jenny Morgan’s SKINDEEP and Derrick Velasquez’s Obstructed View. She will also give insight into Ryan McGinley’s The Kids Were Alright. With her experience and insight, Larkins will respond to your most detailed questions and obscure thoughts, so bring your open and intrigued mind and your similarly curious friends.

On Exhibiting in Venice with Joel Swanson and Laura Shill 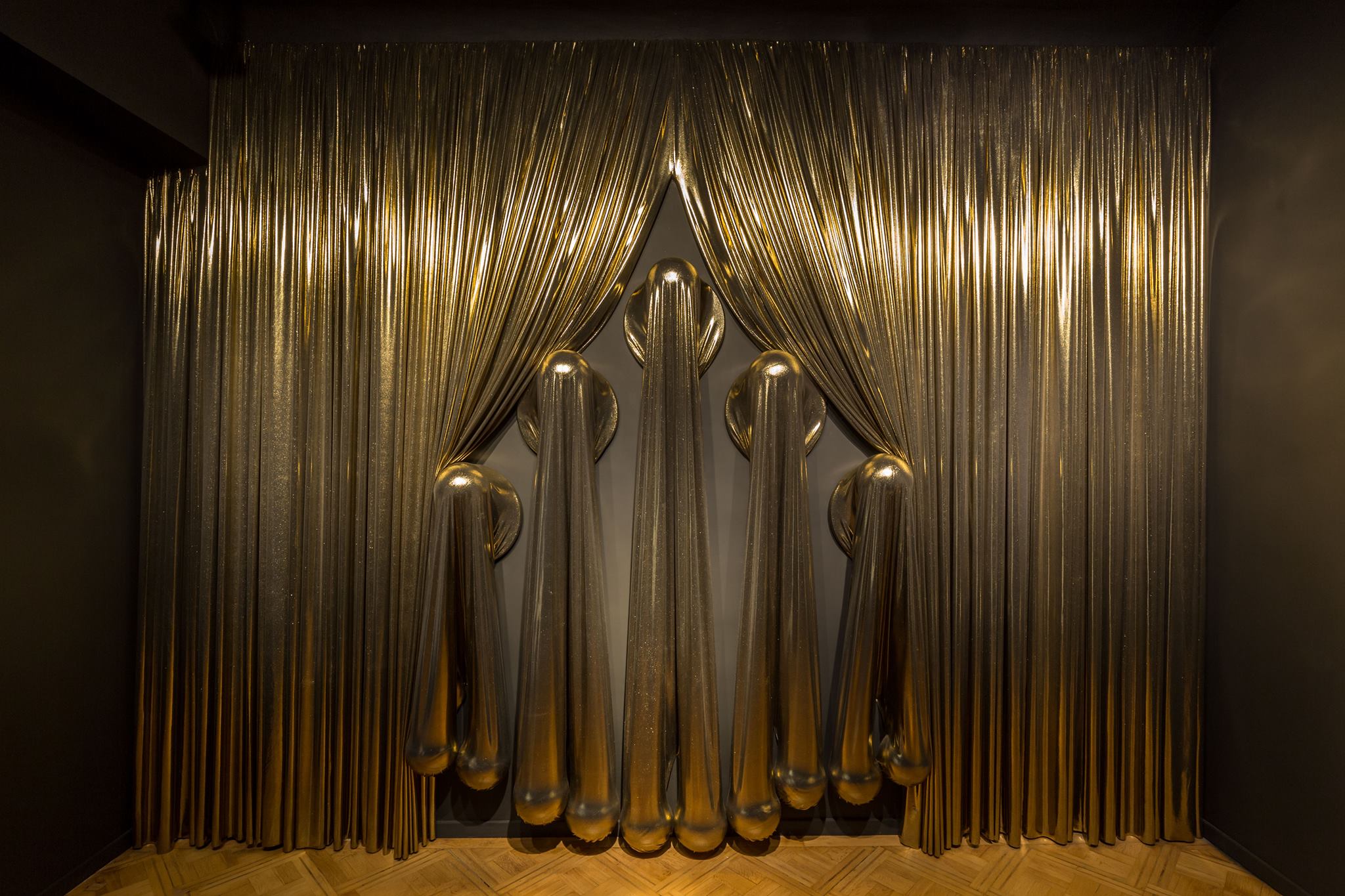 The Lowdown: Join the conversation with Colorado-based artists Joel Swanson and Laura Shill about their Black Cube exhibit, Personal Structures, in Venice, Italy. Now in Denver, they are here to talk about their experience with their work in one of the world’s most prestigious art institutions, Venice Biennale. Their works specifically explore the relationship between gender and language. Experience art in Venice through their eyes and get a deeper look into Swanson and Shill’s work.

Julianne and Derek Hough: Move – Beyond 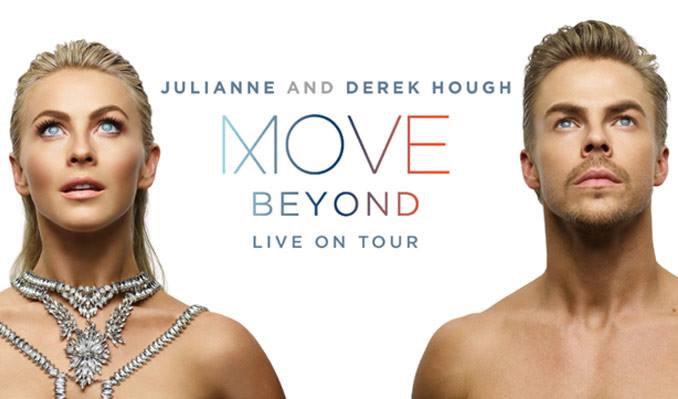 The Lowdown: These dance and film stars are live on tour this year and making a stop in the Mile High City. The Hough siblings performed at sold-out shows during tours of the original show. Inspired by the elements, fire, earth, wind and water, Move — Beyond is a powerful mix of choreography and stage production. The Dancing with the Stars duo will demonstrate man’s relationship to these elements along with the Move Company Dancers and promise to perform a wide range of dance styles. 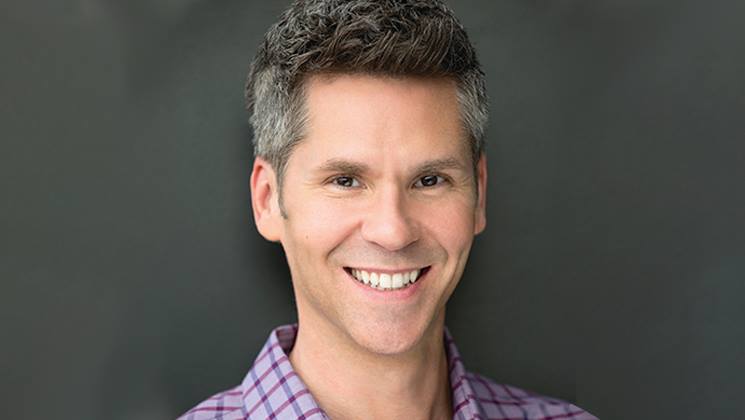 The Lowdown: With many years of experience under his belt, including hosting E!’s Talk Soup and ABC’s Wipeout, Henson is sure to get plenty of laughs out of you. Featured on several networks, including as a pop culture analyst on news networks, Henson knows what he’s doing and gives stand-up performances that incorporate all of his diverse projects and experiences like his role on Food Network’s Worst Cooks in America, as a writer of true-crime TV show Making Jack Falcon and being a father. 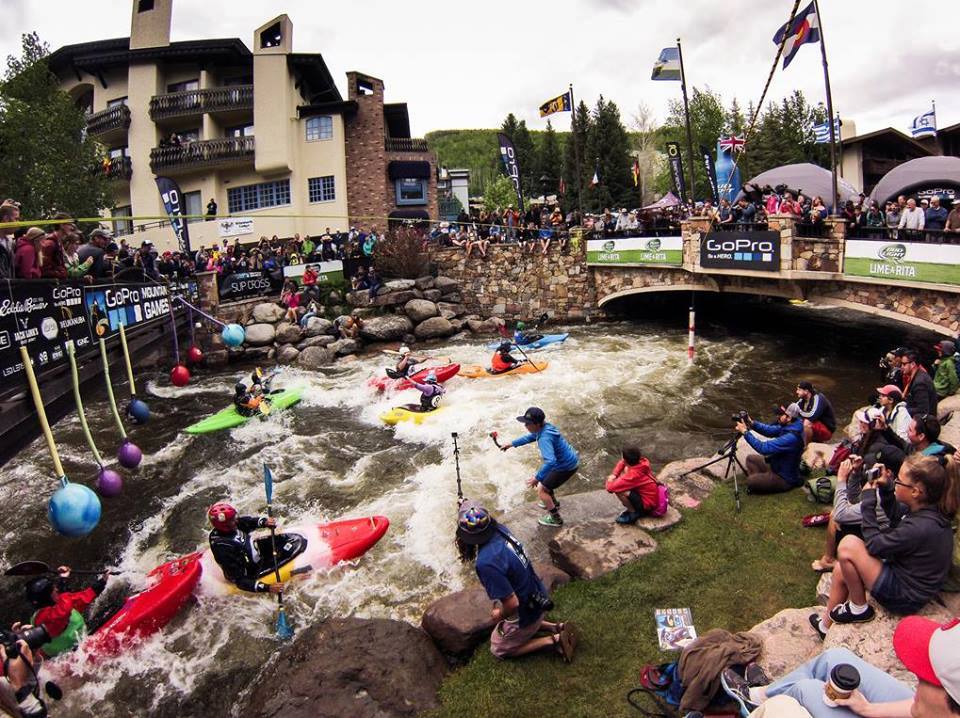 The Lowdown: Live in Colorado? There’s a strong chance you have a mountain hobby or two up your sleeve. Celebrate it and other mountain sports you may have never heard of, but see the pros do it. Head up to Vail and be one of the 60,000 spectators seeing 2,500 athletes compete at the GoPro Mountain Games. These athletes will consist of both pros and your girl-next-door who happens to be a killer kayaker. The 25 sports competed in will include things like World Cup Climbing, stand up paddle sprint and surf cross, trail, mud and road running and many more. Ultimate bragging rights goes to the winner of the Ultimate Mountain Challenge. As a spectator, you can enjoy not only watching these athletes, but also yoga classes, free concerts and participate in photo contests and other nightlife. 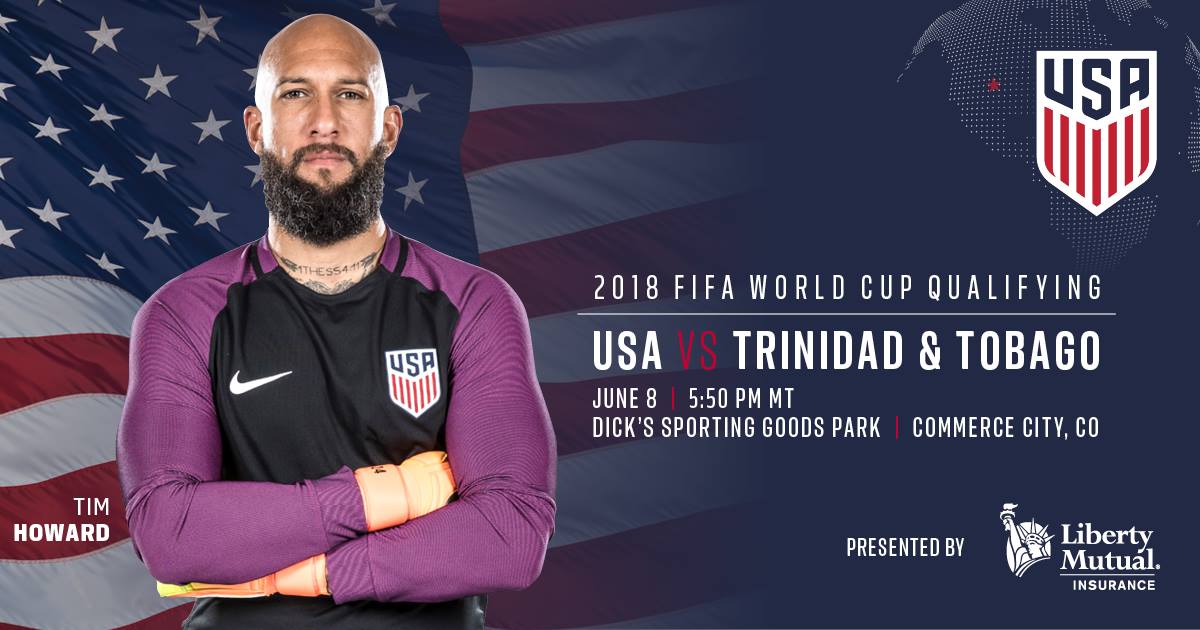 The Lowdown: Experience one of the highest levels of competition in soccer and be part of the 2018 FIFA World Cup Qualifying Round live. The USA Men’s National Team is playing Trinidad & Tobago to go on to qualify for the World Cup. See Clint Dimpsey, Tim Howard and Michael Bradley live in action and feel the excitement of the game.

The Lowdown: This Lit Fest event focuses on a type of art you don’t always think of first — food and drink. Despite this, the art form is something everyone enjoys. With tastes and drinks provided, this event is sure to entice your tastebuds. Speakers will go on stage at 8 p.m. to talk about the elements of taste and presentation. These speakers will include Adam Farmer of Hotbox Roasters CBD, Liz Kohn of Cooking Matters Colorado and Lachlan Mackinnon-Patterson of Pizzeria Locale. Hear their stories and learn a thing or two about food art yourself, all while mingling and enjoying delicious food and drinks. 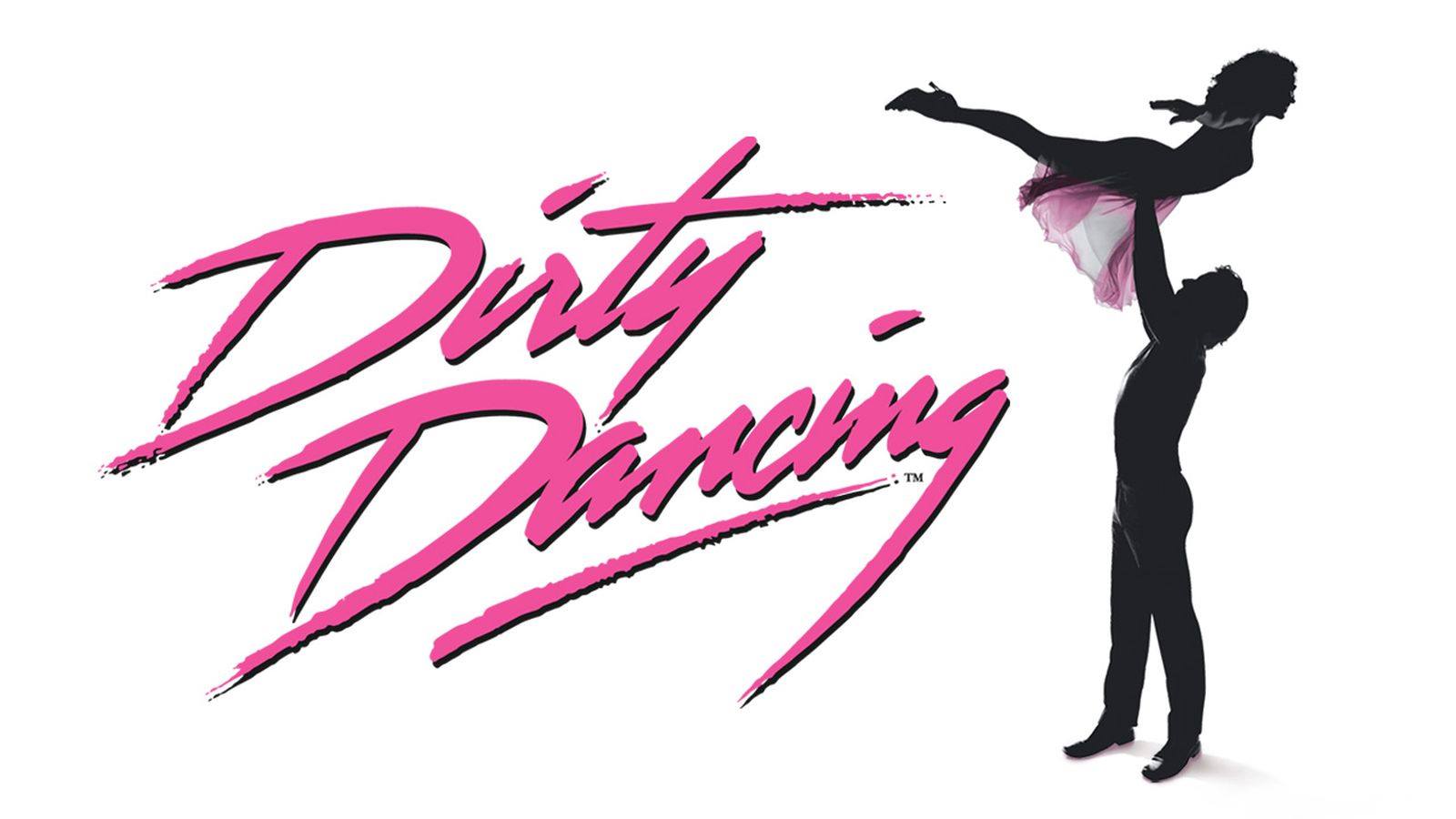 Photo courtesy of Movie and Martinis: Dirty Dancing on Facebook.

The Lowdown: This Friday event has everything you’d want in a girl’s night. From the sexiness that is Patrick Swayze, to two drinks of your choice, this event is sure to satisfy your night off. Start off with trivia and prizes, then enjoy a dinner of salads and appetizers, BBQ ribs and of course, chocolate dipped strawberries and assorted cheesecakes. Finally, popcorn will be served while you watch Dirty Dancing on the big screen.

The Lowdown: Share your poems, spoken word, music and all other forms of art at Open Mic Night. There will be vendors, food and live art at 7 p.m., the show starts at 7:45 p.m. So bring your best work to present or just come to watch all of the talented artists and enjoy some great food on your Friday night. 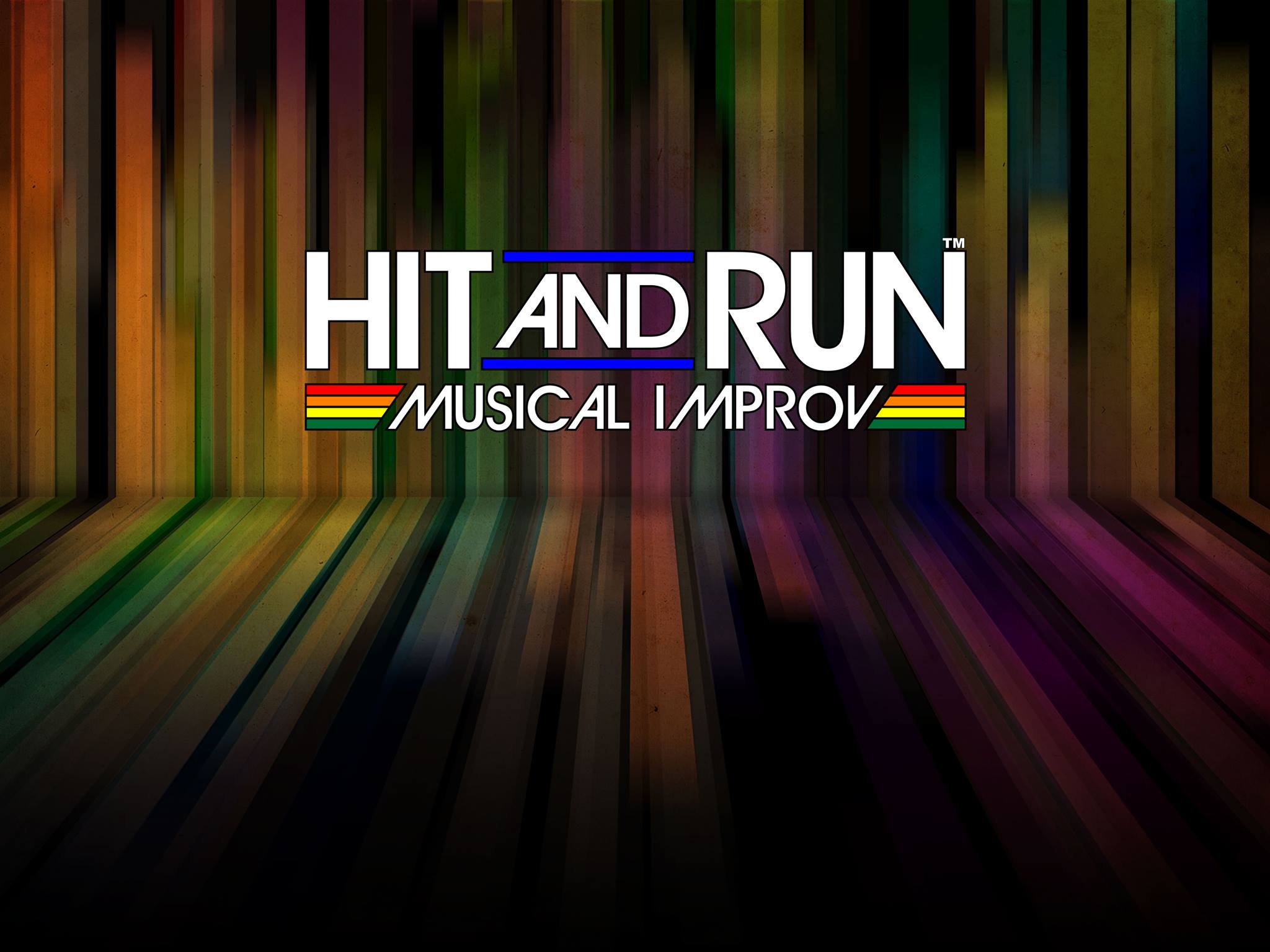 Photo courtesy of Hit and Run: Musical Improv on Facebook.

The Lowdown: As the audience, you suggest the title of this hour-long improv comedy show and the performers create the rest on the spot. With improv artists, live accompaniment and dancing, you’d never know it was unscripted, but that’s the beauty of improv. Of course, each show is original, so be part of making one of them up. 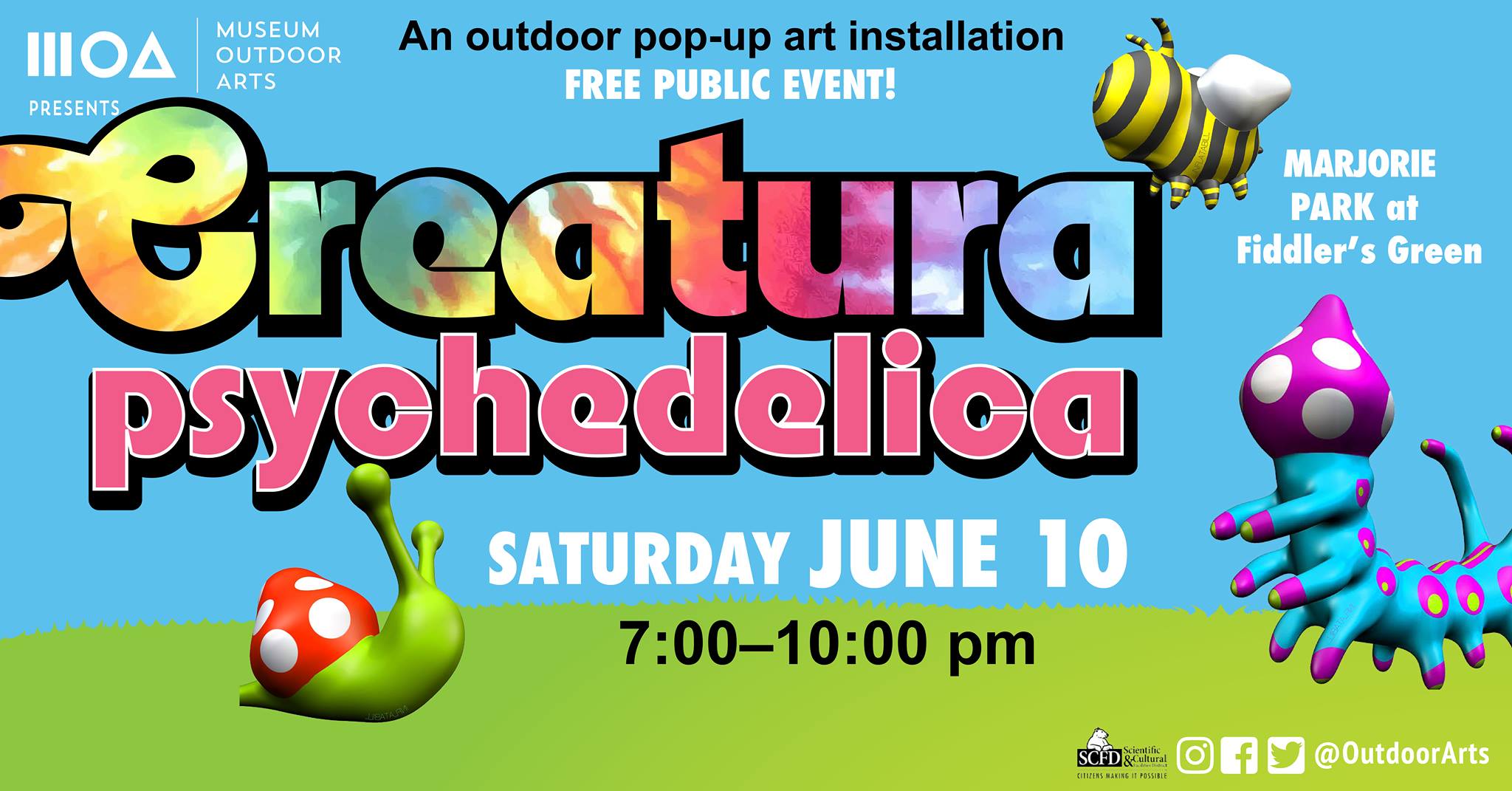 The Lowdown: “Creatura Psychedelica,” presented by the Museum of Outdoor Arts, is a pop-up art installation featuring Bill Kennedy’s (aka “inflatabill”) pneumatic sculpture installation. Known for his work with inflatables, “Creatura Psychedelica” illuminates inflatable, altered animals and insects for a psychedelic experience. This event is complete with fire dancers, food trucks, Artsmyth’s Tiny Shoppe of masks and live music by Ned Garthe Explosion. 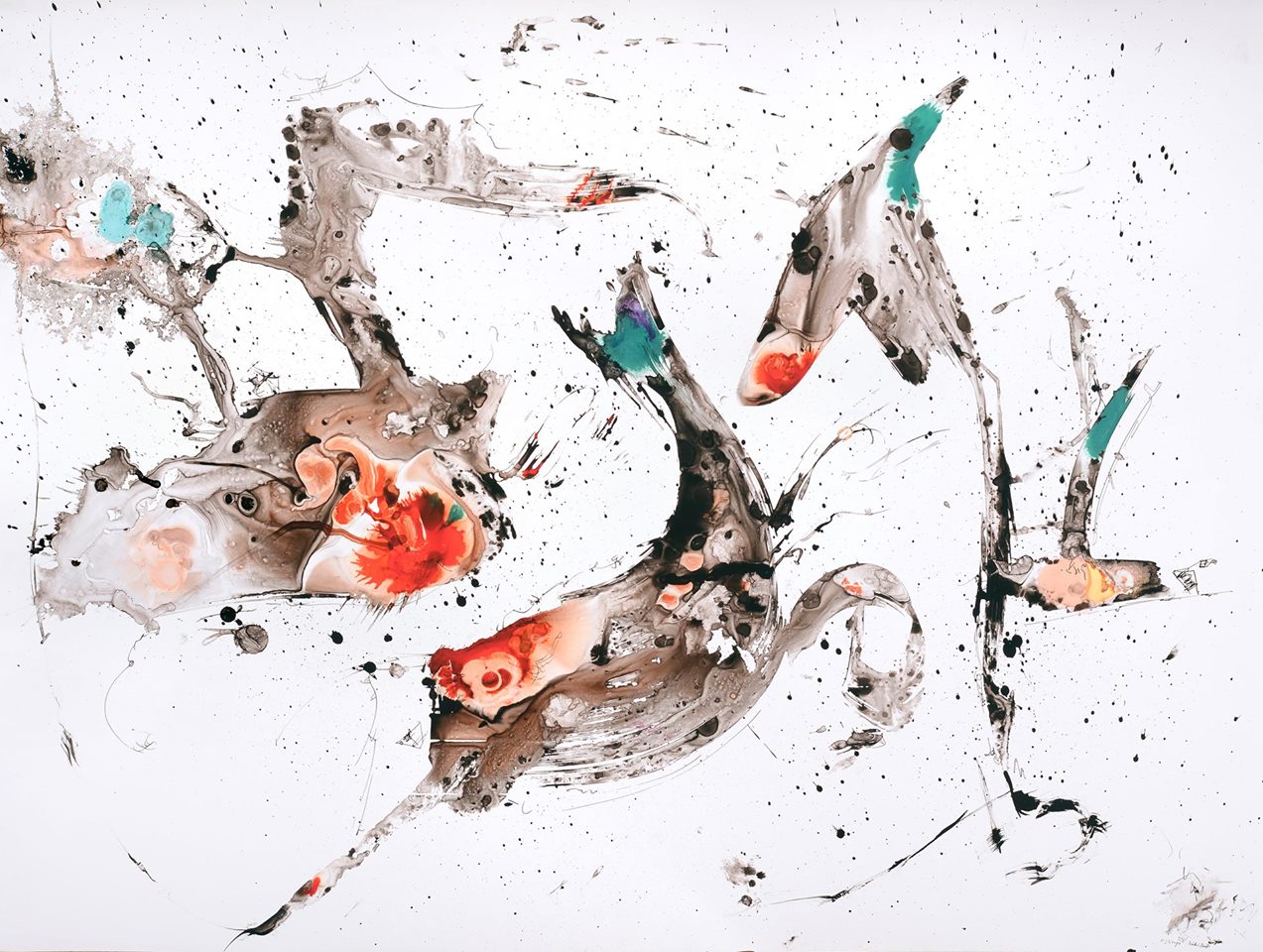 Photo courtesy of the Art Students League of Denver on Facebook.

Where: Blocked area – Between E 1st Ave. and E 4th Ave. and between Logan St. and Sherman St., Denver

The Lowdown: The Art Students League of Denver is hosting their 25th Annual Summer Art Market near Washington Park. Featuring the work of 260 artists, there will be a wide diversity in art and demonstrations from ceramics and fiber arts to printmaking and sculpture. There will also be live music by Mudra Dance, Mo Jo Mama Blues, Kicked to the Curb and many others as well as food and drink vendors like Little Pub Company and Crafthouse to peruse through.

LGBTQ+ You: A Variety Benefit for Trans Lifeline 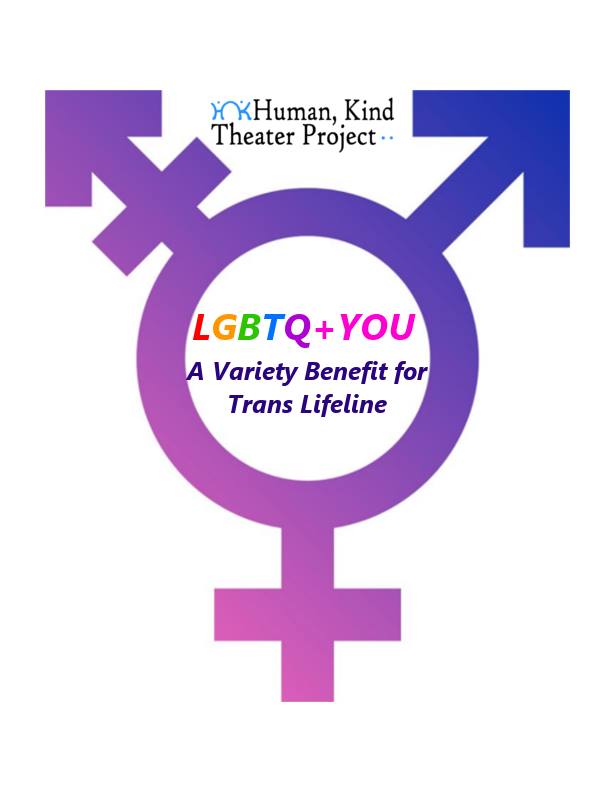 The Lowdown: This benefit show by the Human, Kind Theater Project will feature music, dance, poetry, comedy and theater by local artists and performance companies including Bella Diva Dance, Bradley Gibbons, Ethan Knowels, Cory Sapienza, Third Kind Improv and many more. This event will raise funds for Trans Lifeline, a non-profit hotline that supports transgender people in crisis. Enjoy a great show and support a great cause to wrap up your weekend.

Art on Film Summer Series: Women on the Verge of a Nervous Breakdown