When Strange Dirt’s Marsha Robinson discovered a box of gouache paints her mom had kept under a bed, the Denver artist had no idea it would be the key to her creative destiny. Robinson was interested in art throughout high school but knew art school was out of the question because it was too expensive. Instead, she opted to dive into administrative work but something kept telling her it wasn’t the road she was meant to take. “I was moving away from home with my first love and my mom gifted me the box of paints. I was surprised she had kept it but there was a reason for it and I’m so grateful she did. I had an itch to pick up the paintbrush and see where my hands wanted to take me. So I opened up that box and the rest is history,” Robinson said. Using gouache, an opaque water color, would lead her up to using ink, her main medium today. Even after dabbling in art shows at local venues and selling pieces, Robinson felt her work still needed a stronger focus. Frustrated with working in the food industry, she took the leap and decided to pursue art full-time. 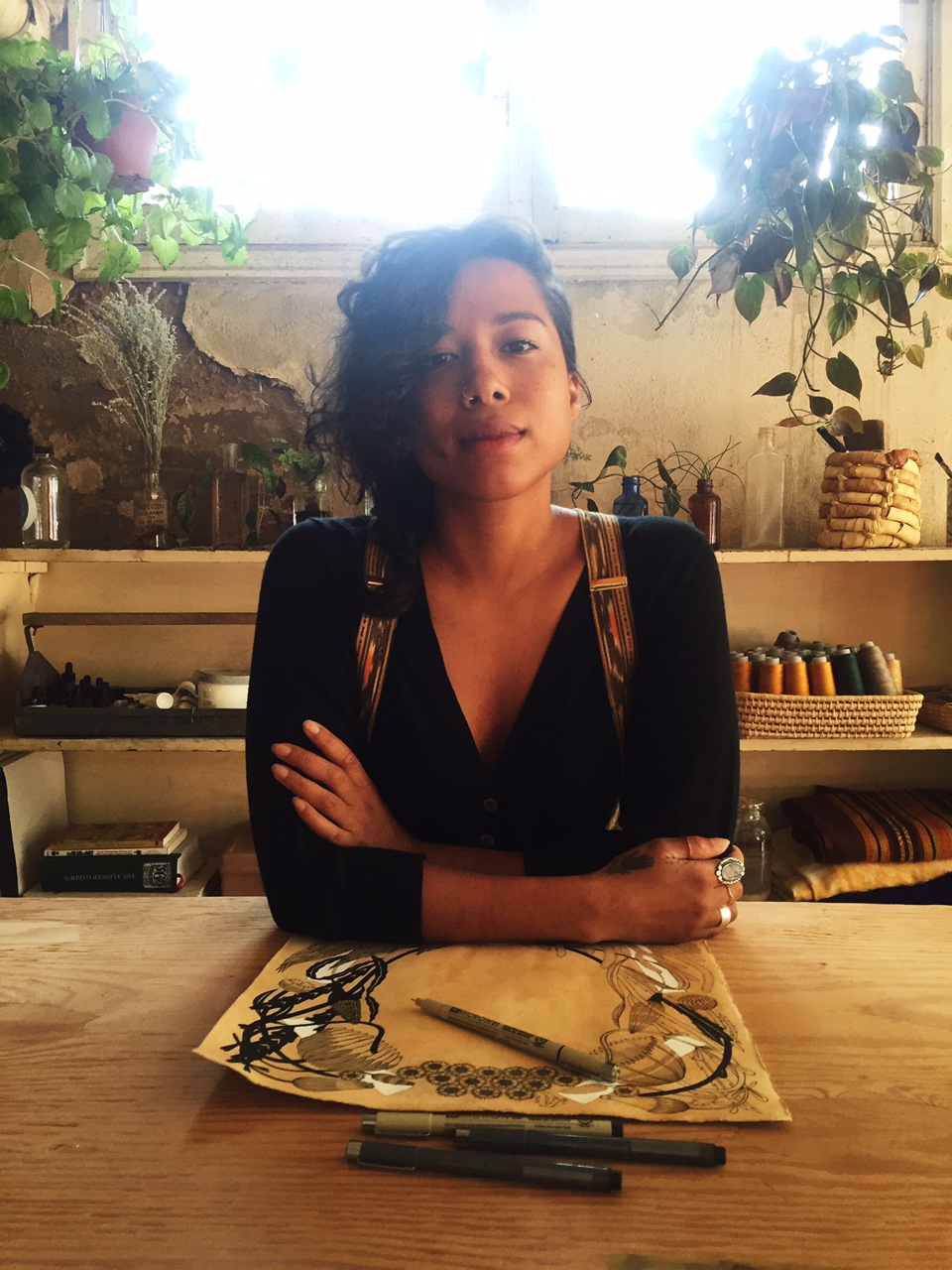 If you take a look at Robinson’s work, you’ll notice intricate botanical imagery amid art deco design. “Seeing a building that was built in the ’30s or ’40s makes my heart melt,” she said. Robinson combines the art deco with the beauty of a bouquet of flowers. She believes flowers can mean many things to different people and are iconic of many life’s occasion: death, marriage, love or friendship. “I look at flowers as soft structures, like clothing. Some petals have folds and ripples, and they come in many shapes, sizes, colors and textures,” Robinson said. It was this fascination with Mother Nature that birthed the artist’s inspiration for the name Strange Dirt.

She began using the name at her first art show at Weathervane Cafe. A lot of Robinson’s botanical illustrations are make-believe, she takes bits and pieces of elements from existing flowers and creates her own blossom. She said, “I wanted to think of my flowers as something that I created, kind of like playing God, and that they were planted in dirt that was magical. It seemed fitting to have my work go by Strange Dirt, because they were magical and strange and grew out of soil that was special and different. It stuck with me, so I chose to adopt that as my persona.” 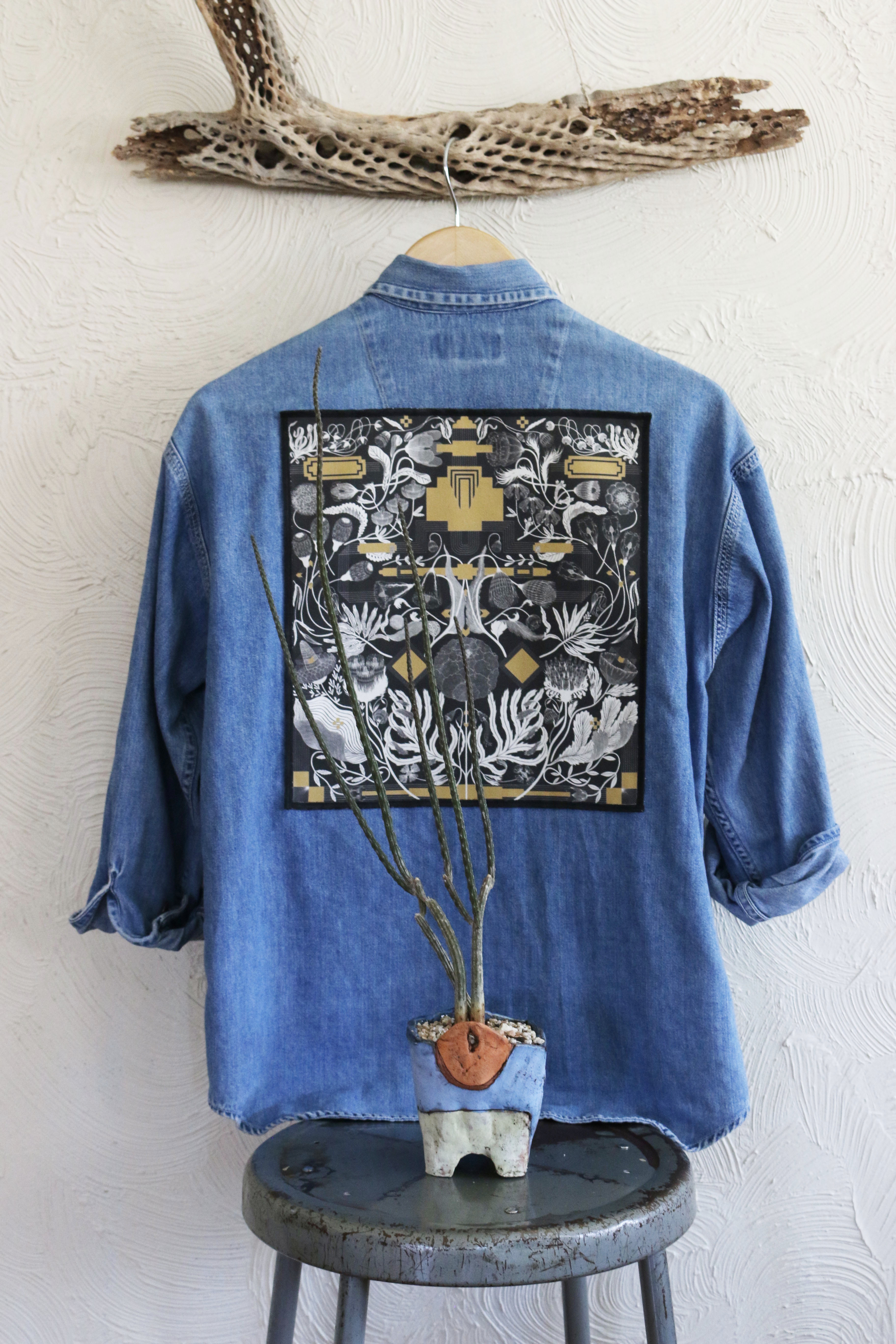 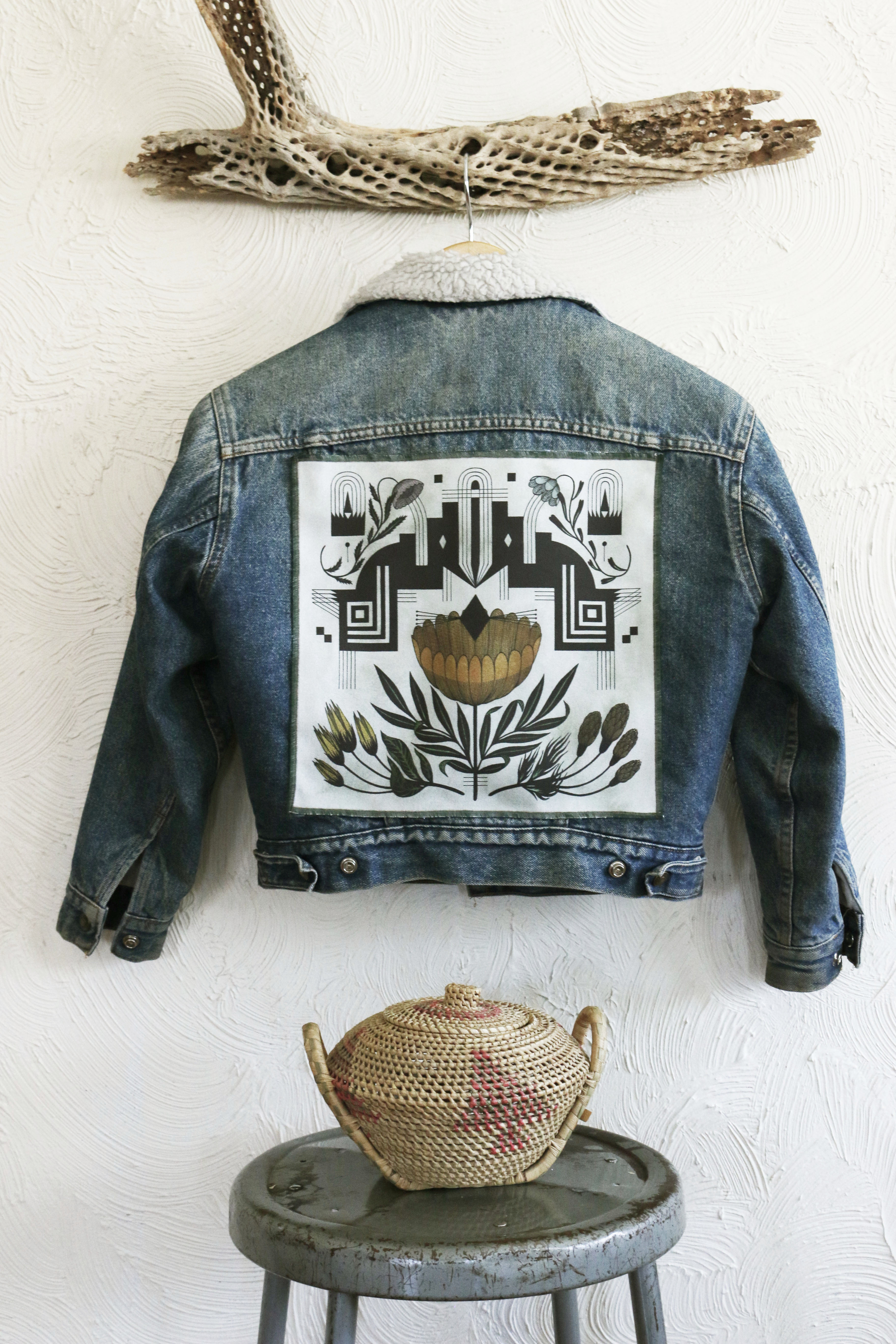 Even though Robinson’s designs are on patches, glassware, textile prints and fine art prints, she admits it’s the patches that put Strange Dirt on the map. “When I moved to Denver I tried to live in collective houses and met a lot of people who were anarchists. I saw a lot of patches on hats, denim jackets and backpacks and they all meant something very important to the people carrying them, and they were so dirty and so loved,” she said. She might not have completely fit in but she appreciated the culture and wanted to find a way into the lives of many, not just of a certain scene. “I wanted the patches to have a life and last longer than a year. I wanted my work on garments but I didn’t want to find a t-shirt I created in a thrift store because of fashion trends changing with seasons. I want for people to hold on to the patches as long as they could,” Robinson said. 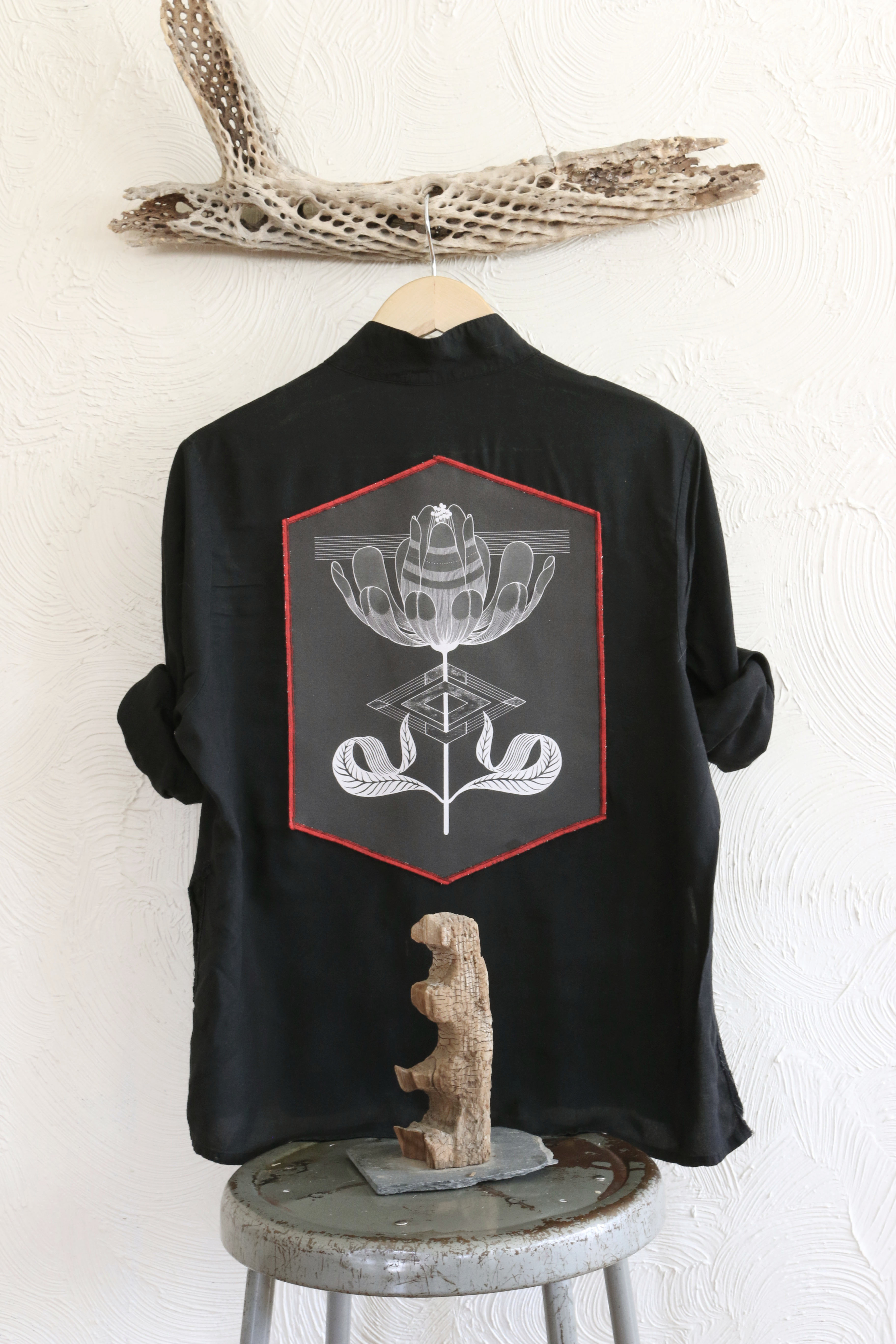 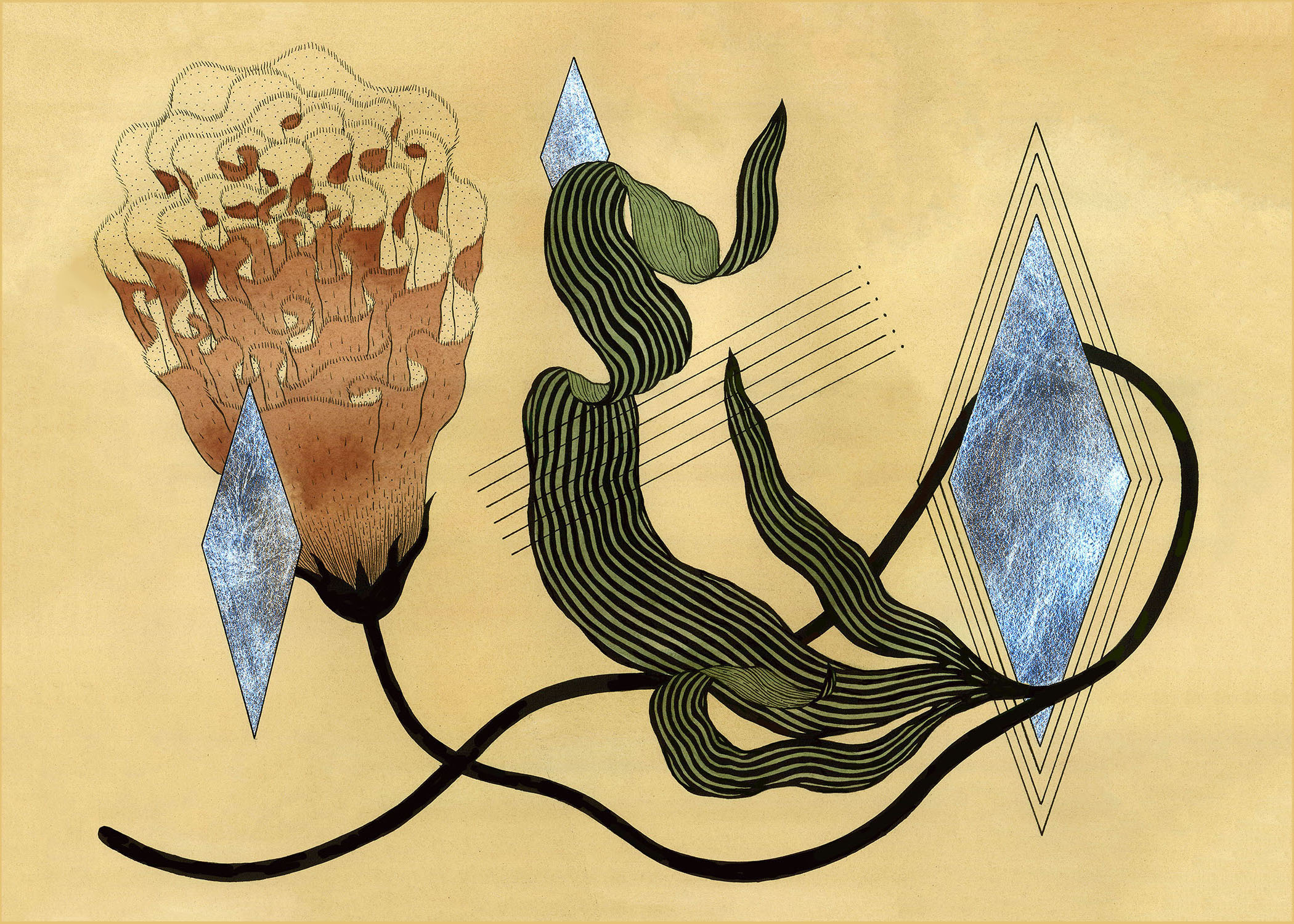 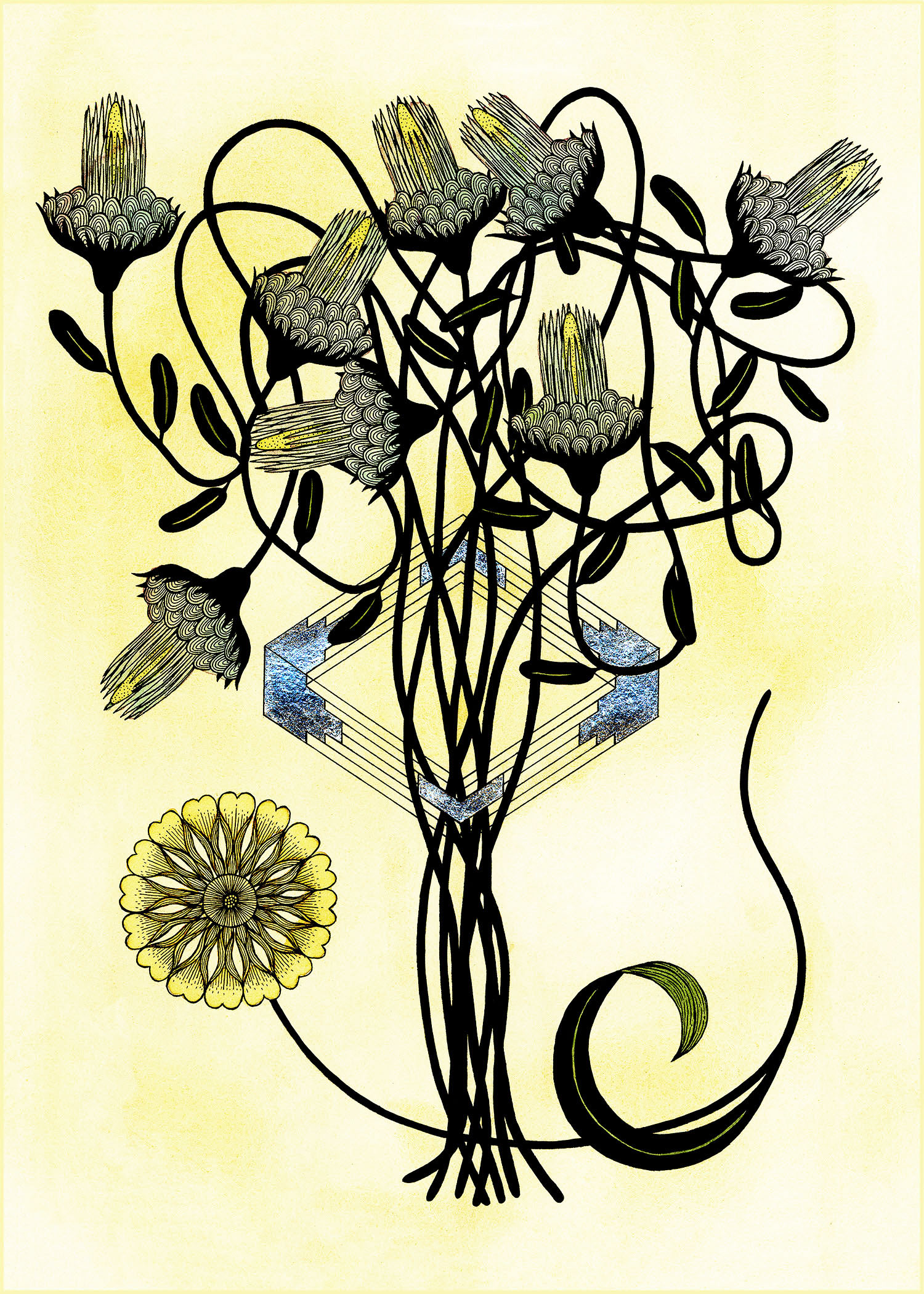 The artist toyed with the idea of becoming a fashion designer and even went as far being accepted into the Fashion Institute of Design and Merchandising in Los Angeles. “I lasted about five months. I was commuting over an hour each way and I couldn’t sit in my seat and listen for an hour at a time. I realized I didn’t want to go as far designing clothing for other people. So I walked out of one of my classes and dropped out. I tried community college as well but school is just not my thing,” she said. Robinson gets really happy when she sees people wearing her designs on patches and that they love it enough to display it. 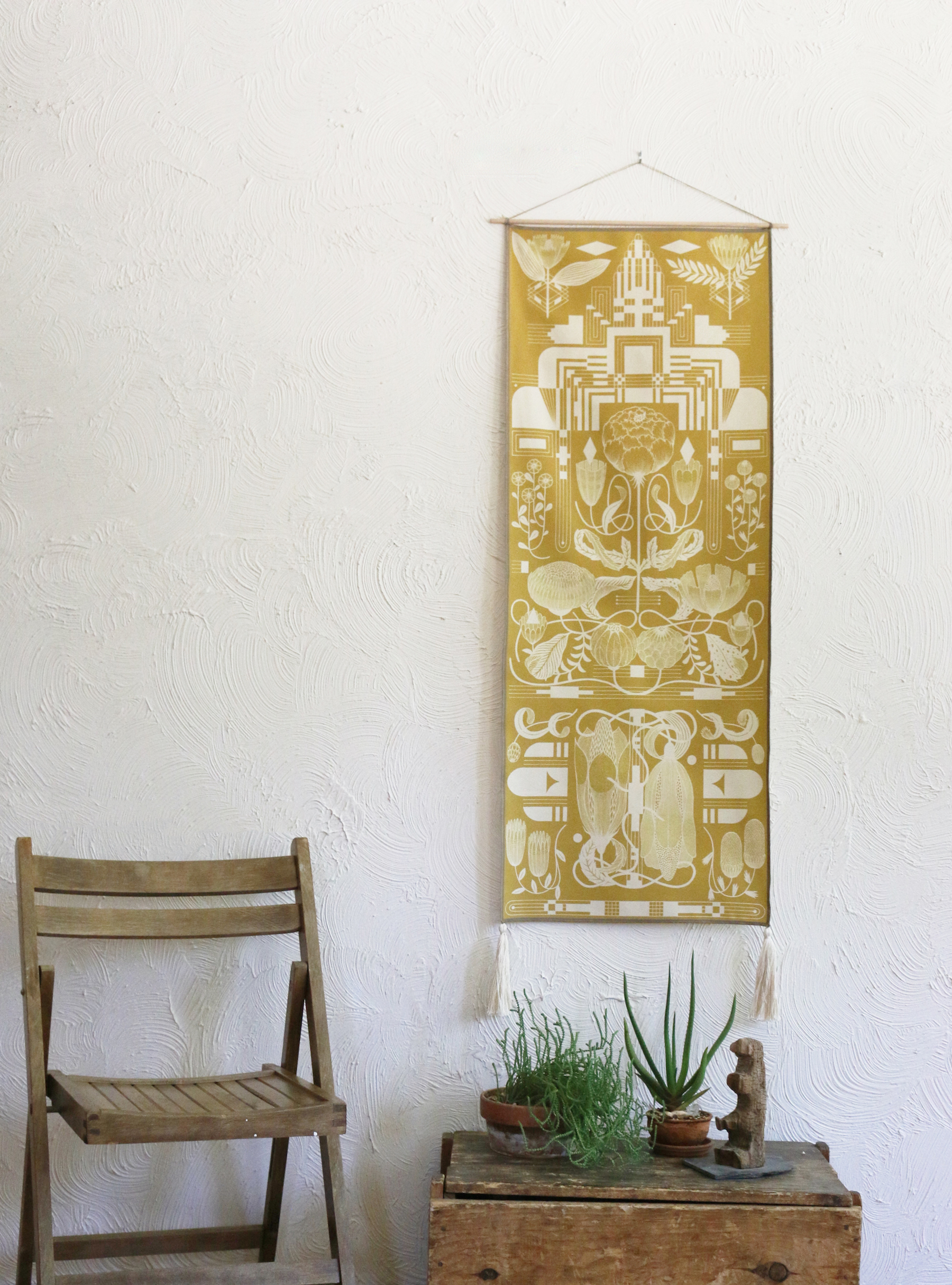 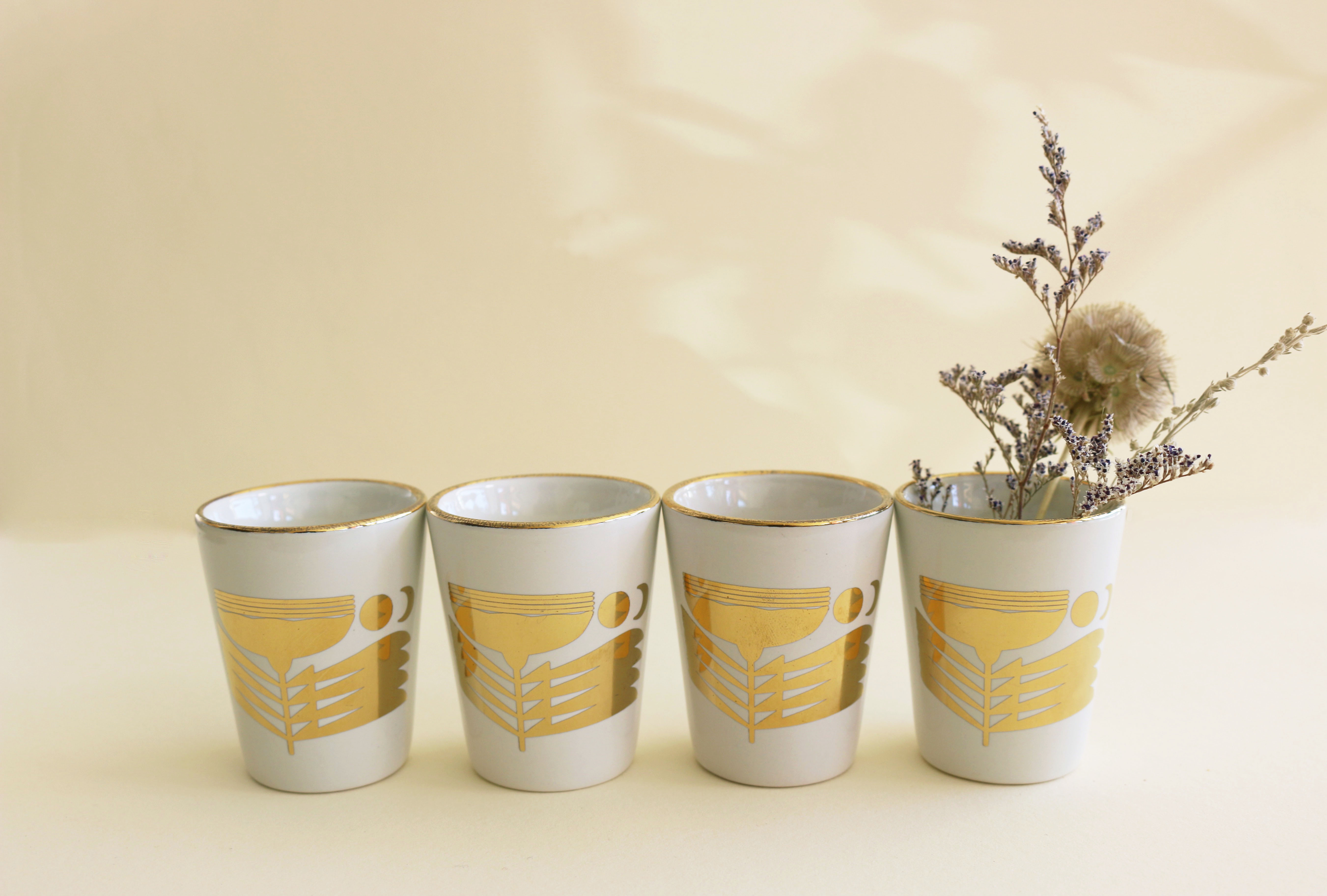 Textile designs became part of the equation when Robinson wanted to see her work blown up to a larger scale. She found a textile printer in North Carolina, received her first order and was amazed by the result. “I also wanted my work to be part of a home, it made sense to have something that someone can hang over their bed or couch and it’s a piece of fabric that’s versatile,” she said. Glassware came next when Robinson desired a level of sophistication for Strange Dirt. Glassware can be passed on from family to family, like grandmothers who have teacup collections or crystal glasses they wish to pass on to grandchildren. Besides sentimental value, she wanted to steer into homeware and accessories. Robinson wants her work to be expressed in every which way possible. 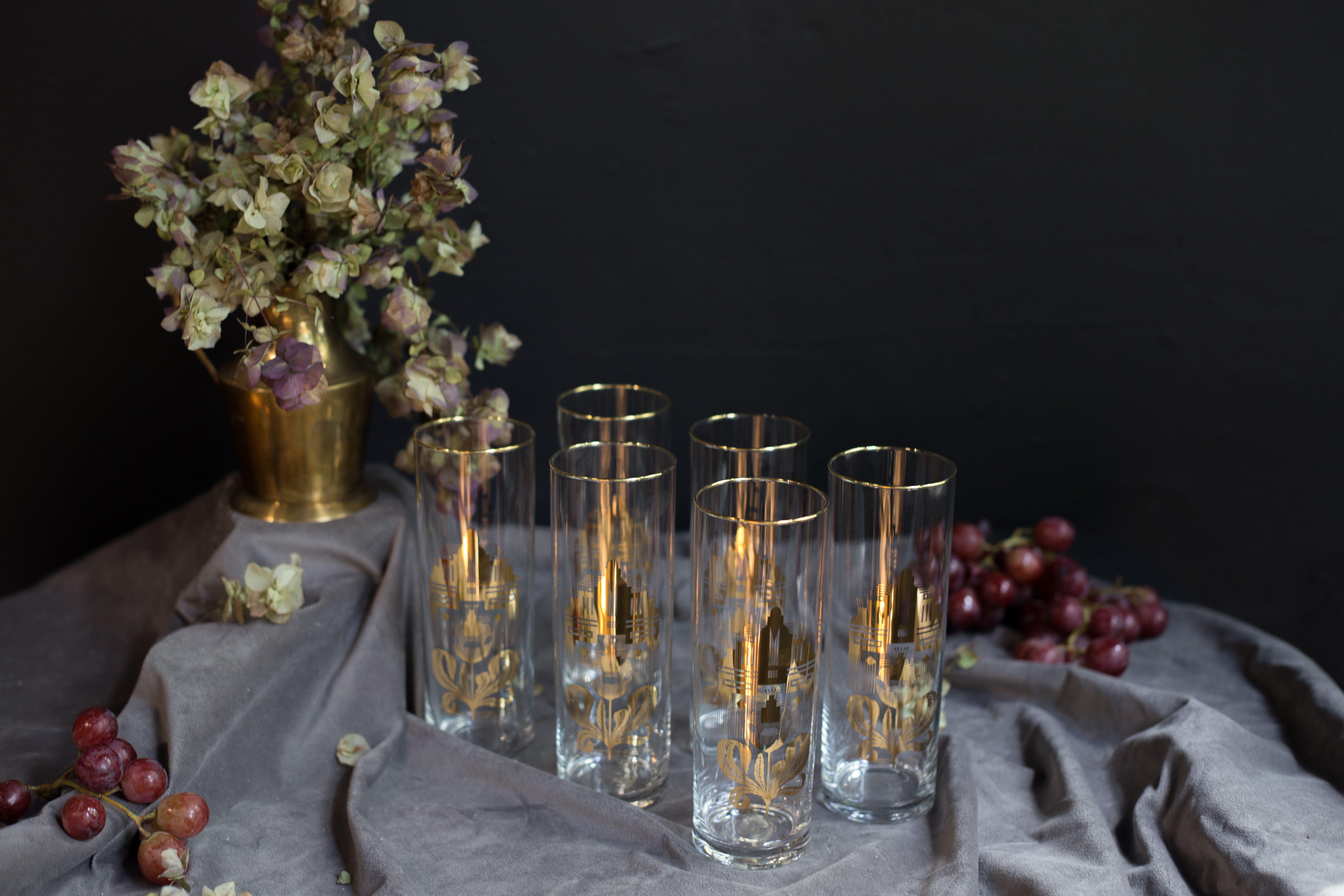 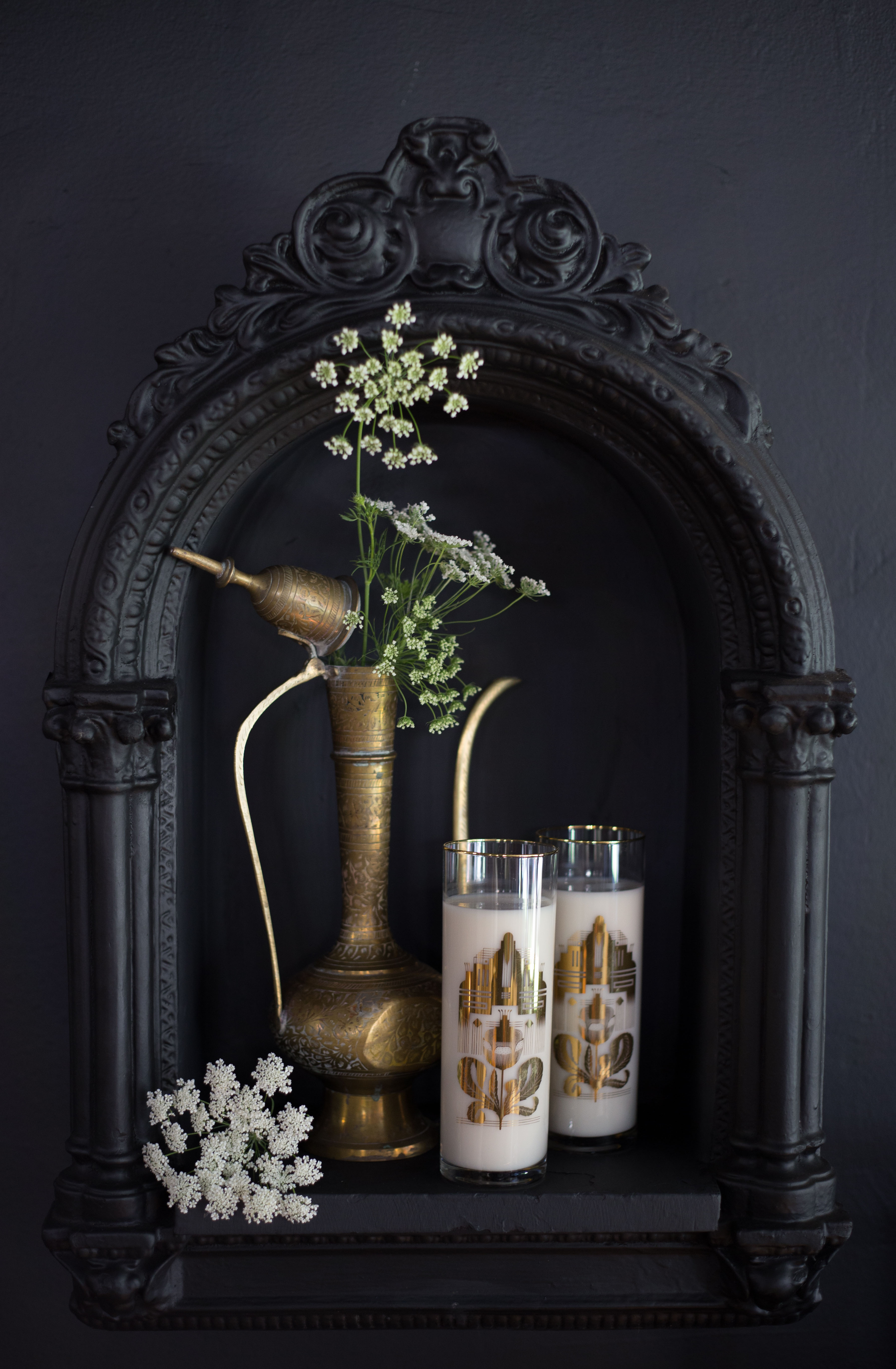 Denver has proven to be an amazing community for Robinson as an artist and as a creative personality. For her, Denver provides room to blossom and people are willing to take the time to give support. “It’s a sweet spot if you’re trying to be seen. Denver’s been wonderful and I feel very blessed to have started my career here,” she said. In the future, you’ll see Robinson working her inventory of original pieces. Robinson said, “I love the process of creating and would like to focus on that more. I’d like to be able to work with designers, art buyers and art consultants and see where my work could go from there. I’d like to see how far Strange Dirt can go in this wonderful city.”

You can find Robinson’s work on Rosehouse on Broadway, at Sacred Thistle, as well as online. Lastly, catch her this summer at the I am Her art show on June 24th.