On the night of April 28, a heavy, wet, spring snow fell on the historic Shorter A.M.E. Church building, which houses the Cleo Parker Robinson Dance Performing Arts Complex in Denver’s Five Points neighborhood. The weather didn’t seem to hinder the large audience from piling into the 250 seat theater inside of the complex to see Cleo Parker Robinson Dance‘s (CPRD) latest production, a new take on Shakespeare’s Romeo and Juliet.

For 46 years, CPRD has produced modern, cross-cultural and creative dance productions locally, nationally and internationally. Since becoming a not-for-profit organization in 1974, CPRD, headed by the legendary Robinson, has served the Denver community and beyond with innovation and education. Together, the company’s ensemble, academy, theater and education programs have brought access to the arts to many who otherwise would never have had such opportunities.

CPRD’s Dance Ensemble is internationally renown and whose performances encompass an array of works that are inspired by the African-American experience, featuring ethnic and modern dance traditions. Both iconic and emerging artists come together to create CPRD’s Dance Ensemble, which performs works that transcend the boundaries of class and culture while creating unmatched entertainment locally and around the world. The latest production by CPRD houses two diverse dance theater pieces under one roof, Romeo and Juliet and Porgy and Bess. 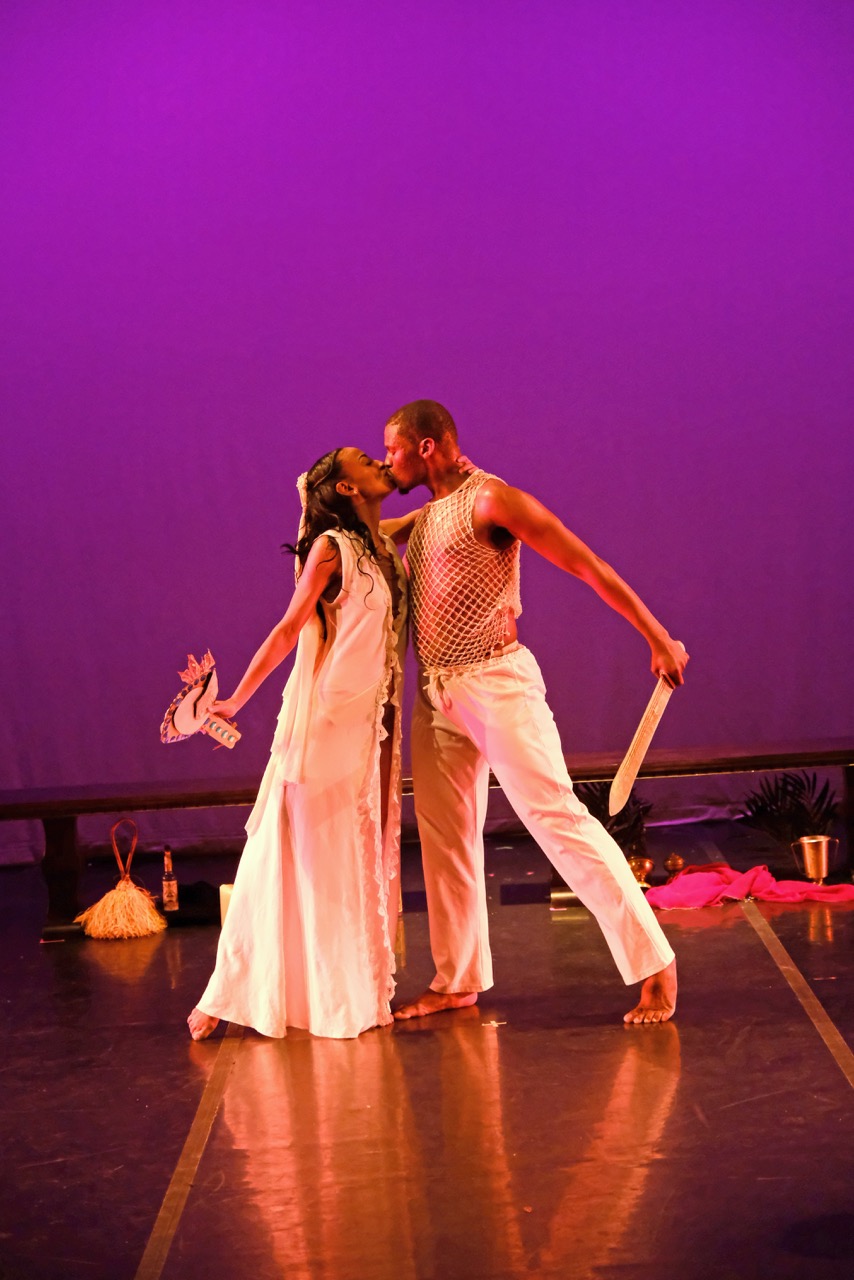 Juliet, played by Chloe-Grant Abel and Romeo, played by Martez McKinzy in CPRD’s production of Romeo and Juliet. Photo by Stan Obert and courtesy of CPRD.

CPRD’s Romeo and Juliet sets the classic tale in New Orleans during Mardi Gras where the Capulets are an African Yoruba family and the Montagues are Catholic. Yoruba is a religious culture originating from West Africa, which spread to Haiti and then to New Orleans where it has been associated with Voudou — or Voodoo — traditions.

The culturally and spiritually diverse setting of New Orleans brings the tale of Romeo and Juliet out of its typically Euro-centric comfort zone for a whole new perspective. The production team at CPRD, headed by choreographer Robinson, captures the cultural vibrancy of the city of New Orleans while incorporating Yoruba spirituality and traditions, heavily laced with deities. 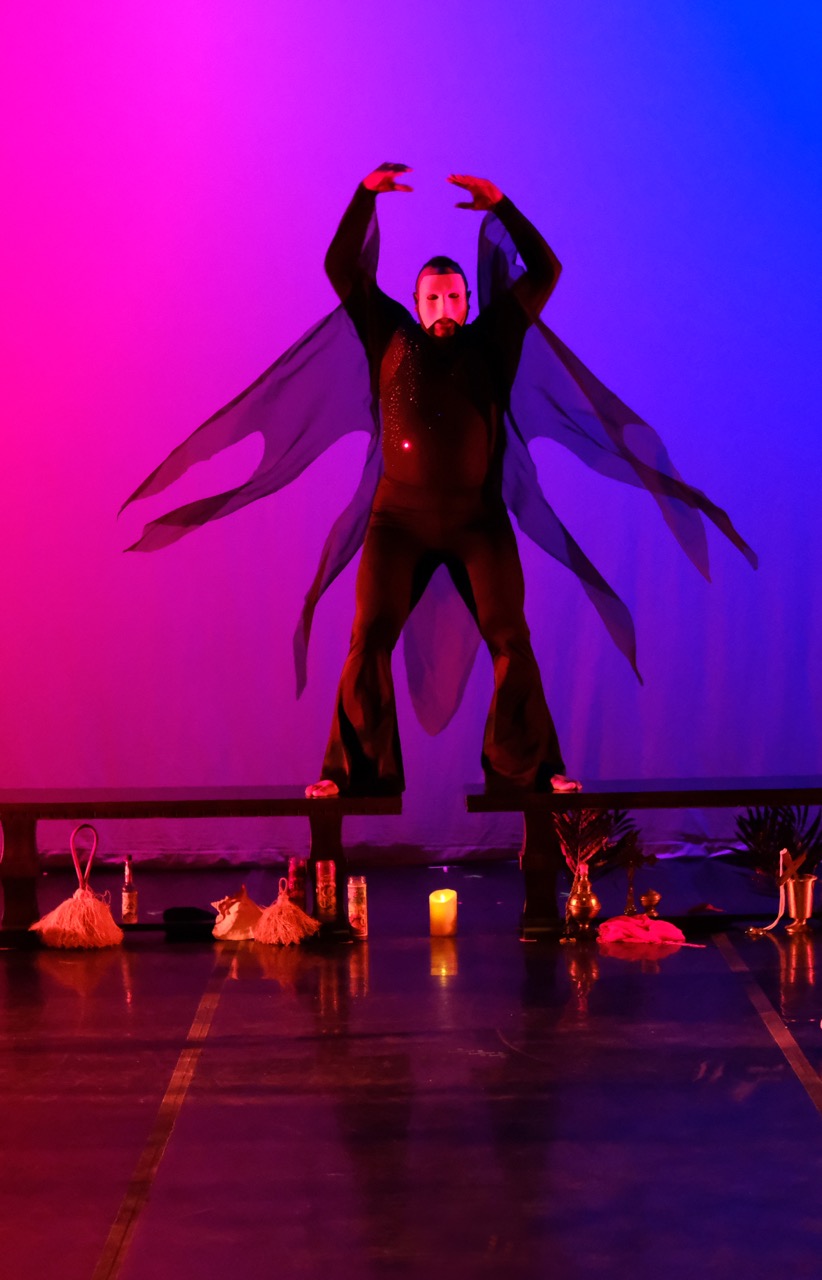 Death, played by Cedric D. Hall revels in the tragedy of CPRD’s Romeo and Juliet. Photo by Stan Obert and courtesy of CPRD.

“Two houses, both alike in dignity, in fair New Orleans, where we lay our scene,” begins the opening monologue of CPRD’s Romeo and Juliet. The monologue continues on with a Creole twist to the language, setting the stage for a truly unique evening of dance theater. The curtain rose to reveal the two lovers, Romeo and Juliet, as they lay with the figure of Death standing over them. They are awakened from death to the afterlife by the earth goddess, Ane. In Yoruba culture, Ane is queen of the underworld and represents earth, mortality, fertility and creativity. The end is the beginning, foreshadowing the tragic tale of two lovers, divided by religion and culture.

Shakespeare’s story of Romeo and Juliet is based on the premise of two families divided by a long-time feud filled with death and violence. While this remains true in CPRD’s telling, the divide is rooted more within the two very different cultural perspectives of the houses of the Capulets and Montagues. However, as the play unfolds, the audience can see that these two cultures are more alike than they are different. Both have their deities and deeply-held traditions, which, at times mirror one another through the movement of the performers. 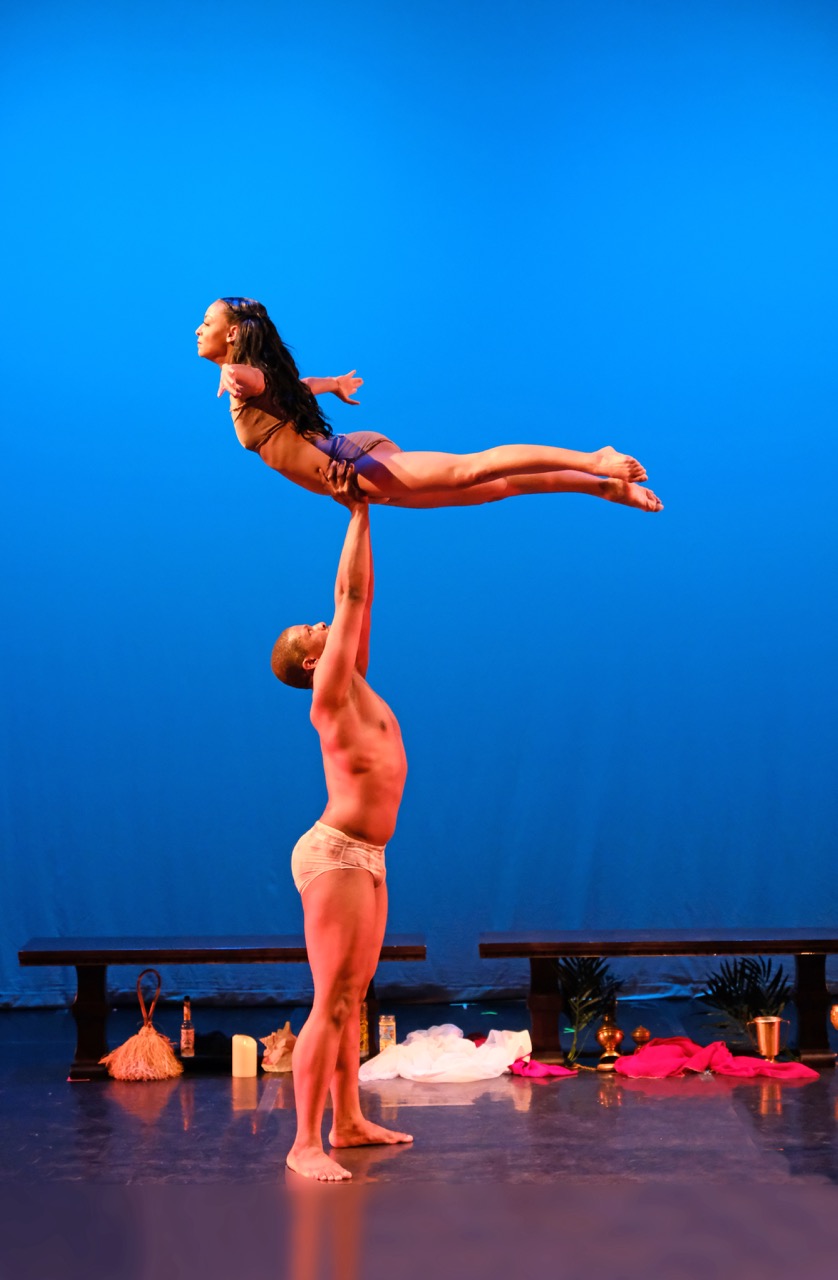 Chloe-Grant Abel and Martez McKinzy dance as Juliet and Romeo. Photo by Stan Obert and courtesy of CPRD.

Romeo is intrigued by Juliet and through his growing love for her, finds himself interested in her culture and beliefs. His curiosity is revealed when he is caught observing the Capulets’ sacred religious ceremony and finds himself wanting to know more. This is a pivotal moment in Romeo and Juliet. It is the moment where hope is ignited. Hope that perhaps the love between Romeo and his Juliet can bridge the gap between their cultures. It is the promise that love can conquer the cultural divide and bring about a cease-fire between the feuding houses.

This hope is further fueled by the provocative and intimate love scene danced with intense passion and precision by Chloe-Grant Abel (Juliet) and Martez McKinzy (Romeo). Ultimately, tragedy befalls the lovers in classic Shakespearean form. But the tale explores the possibility that love can conquer all — coming full circle, back to the opening scene where Romeo and Juliet are led to the afterlife, by the goddess Ane, hand-in-hand.

CPRD’s production of Romeo and Juliet transforms the classic tale through a new cultural perspective as well as presenting it through dance and music in an innovative way. The production is set to the timeless score composed by Serfei Prokofiev, with original arrangements by Andrew Litton of the Colorado Symphony Orchestra. It is layered with New Orleans jazz and Yoruba percussive rhythms and chants arranged by Jodel Charles, enveloping the play in a rich cultural atmosphere. The multi-talented cast and production team brings something truly unique, thought-provoking and sensually enticing to the fated tale of Romeo and Juliet. 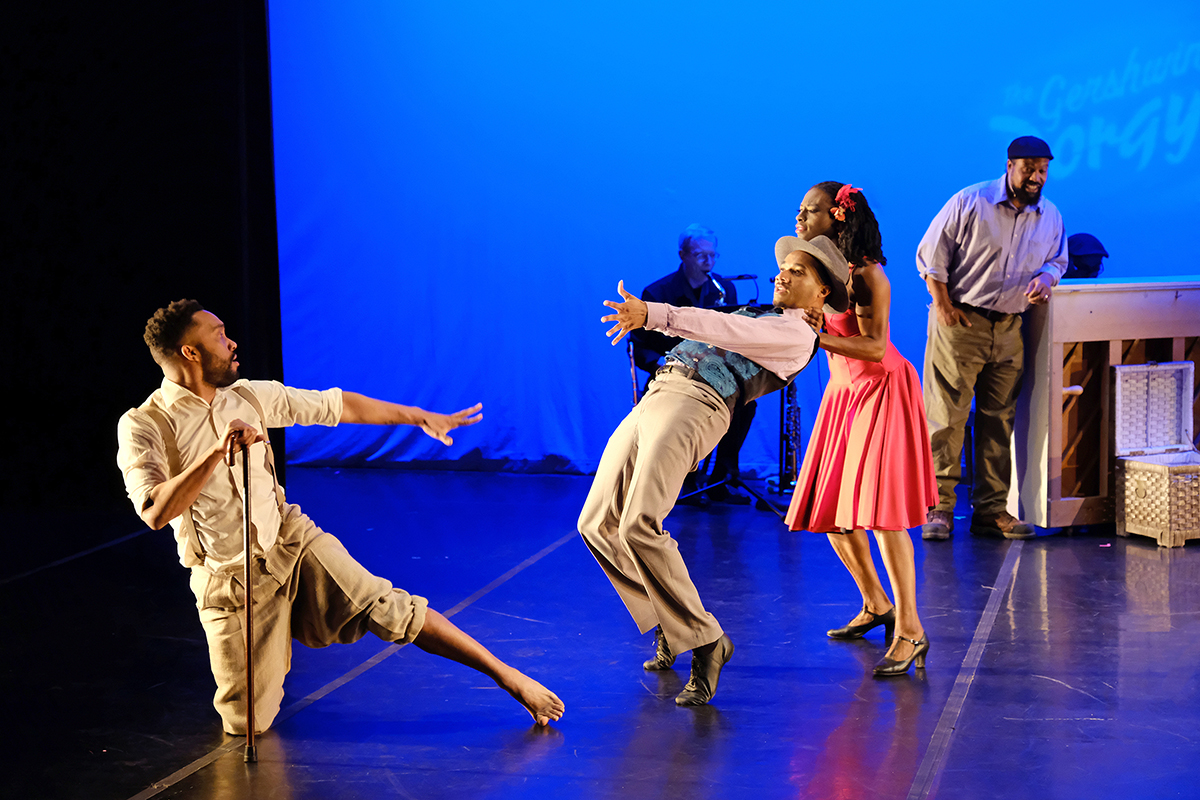 Along with the presentation of Romeo and Juliet, CPRD’s latest show opens with an excerpt from the timeless tale, Porgy and Bess. Originally an opera by George and Ira Gershwin and DuBose and Dorothy Heyward, Porgy and Bess is the story of a disabled beggar, Porgy, and his transformation by his improbable and unexpected love of Bess. At the time that Porgy and Bess debuted in New York in 1935, it was a controversial tale that followed the lives of the residents of Catfish Row, and African-American neighborhood in Charleston, South Carolina.

Porgy and Bess has been performed all over the world by various theater and opera companies and has been made into films. Now, CPRD’s production of Porgy and Bess is a delightful surprise addition for Denver audiences attending Romeo and Juliet.

CPRD’s Porgy and Bess is set in the 1930s and the cast is clothed in vibrant period-reflective costumes as they expertly fly across the stage in what is one of three versions created by Robinson. The production also features a live jazz band, arranged by Jodel Charles, adding a cabaret-like atmosphere to the musical. 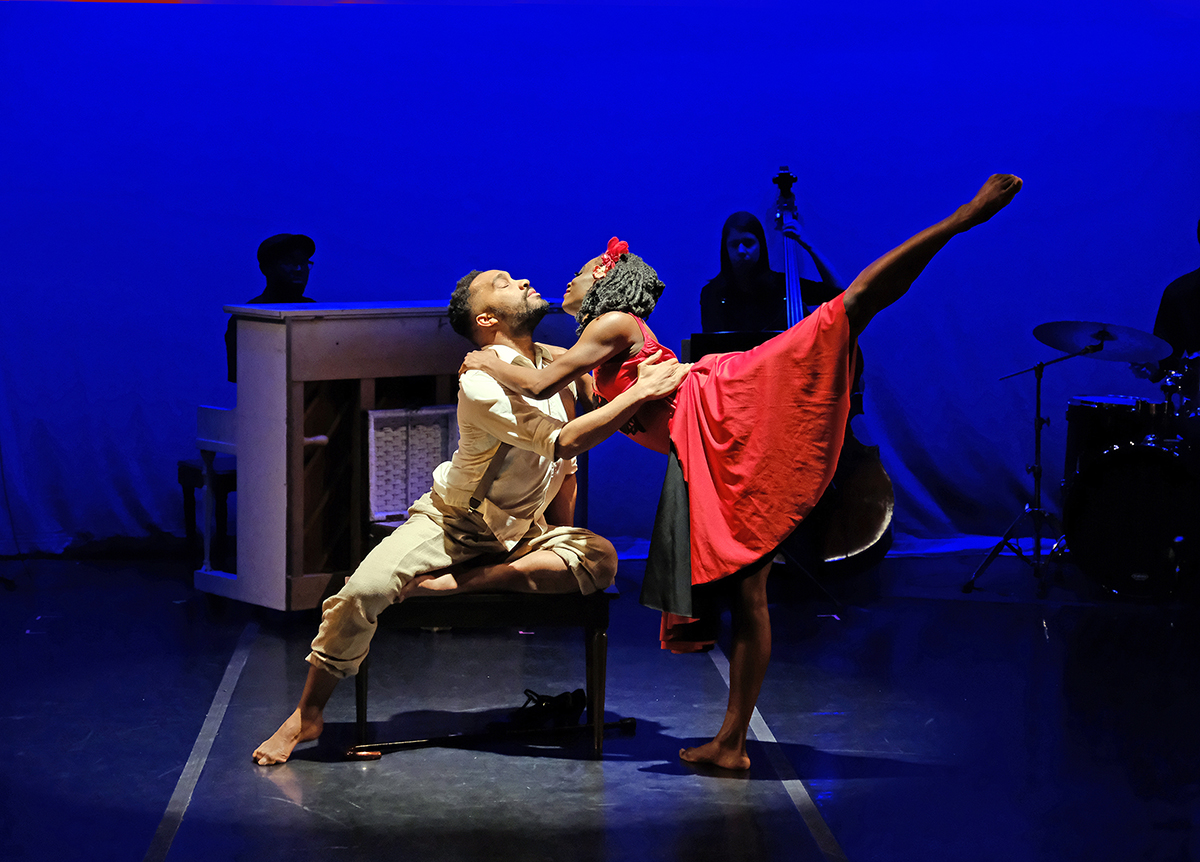 Edgar L. Page as Porgy and Ralaya Goshea as Bess in CPRD’s Porgy and Bess. Photo by Stan Obert and courtesy of CPRD.

The excerpt features Edgar L. Page as Porgy and Ralaya Goshea as Bess. The story chronicles their tragic love set against the odds that Bess can overcome her life as a prostitute and the seductive temptation of her drug dealer, Sportin’ Life, played by Davry Ratcliffe.

Both Romeo and Juliet and Porgy and Bess sit beautifully side-by-side in CPRD’s evening lineup of expertly choreographed dance numbers, delightful musical arrangements and tales of tragic love all done with Robinson’s unique ability to create inspirational and transformational dance theater. Denver audiences won’t want to miss next weekend’s last chance to see what the community of performers at CPRD has to offer with these two unique productions.

For more information about Cleo Parker Robinson Dance and the chance to see these two productions side-by-side May 5 though 7, visit CPRD’s website here.