This summer, Cirque du Soleil promises to take Denver audiences on an imaginative exploration of Mexico through a dream-like journey in the company’s new show, LUZIA. The show will explore Mexico’s cultural vibrancy through poetry in acrobatic motion. Drawing on the diverse mix of Mexico’s landscapes, architectural wonders and the indomitable spirit of its people, LUZIA will weave together visual fragments into a tapestry of circus arts to enthrall and delight audiences. Cirque du Soleil will present LUZIA under its signature Big Top in the parking lot of the Denver Pepsi Center from June 1 through July 9.

Like its people, Mexico’s rains sweep across its vast landscape in a myriad of forms. Refreshing showers pour down upon Mexico City and sudden and violent autumn rains pound across the country with torrential force. Throughout Mexico, rain surpasses mere weather patterns and becomes a part of the country’s collective subconscious to create a narrative force of its own. For the first time in its history, Cirque du Soleil will integrate the element of rain into its world-renown repertoire with LUZIA.

The use of water in any live performance presents its own set of challenges, doubly so when that performance includes acrobats and aerialists who rely on the stability of their apparatuses and environment to land safely and gracefully throughout the show. Luckily, Cirque du Soleil doesn’t seem to have a shortage of eager and skilled performers willing to take on such a challenge. 303 Magazine corresponded with three such performers to get the inside take on performing circus feats amidst a deluge of water.

LUZIA marks the first time that Angelica Bongiovanni, Benjamin Courtenay and Enya White have performed with Cirque du Soleil as well as their first time performing in Denver. After completing a two-month run of the show in Washington, the three performers are excited about coming to the sunnier climate of Colorado for the summer. 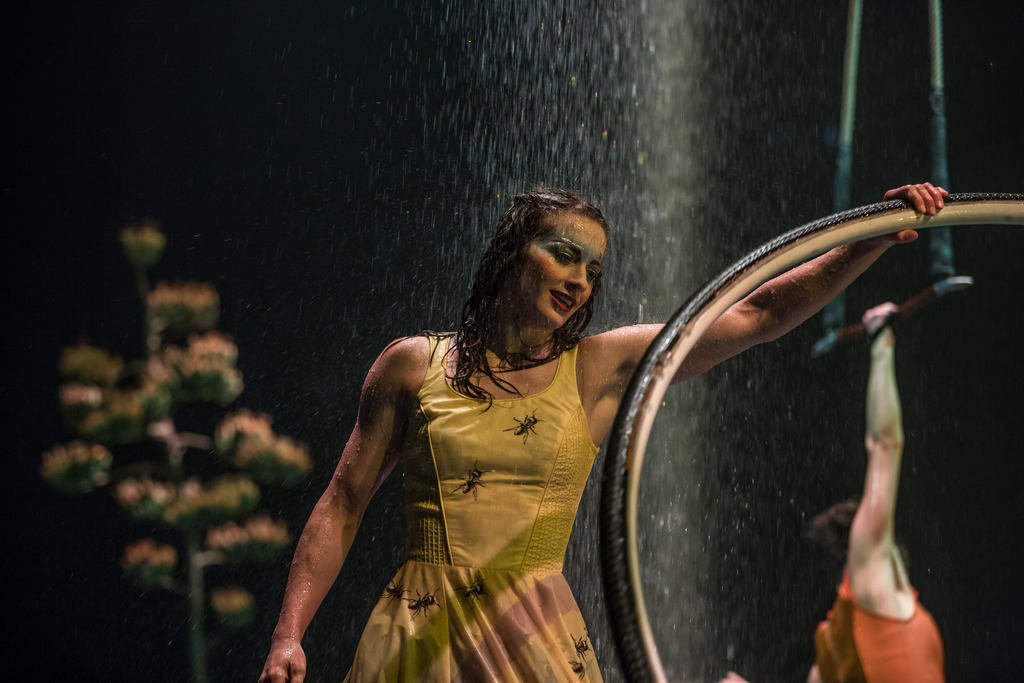 Bongiovanni was introduced to the circus arts at a very young age and instantly knew it was what she wanted to do for a living. “I love being on stage and using my body to express emotions,” Bongiovanni said. She grew up training in gymnastics and competing as a rhythmic gymnast all around the US. She studied Dance-Trapeze at the Montreal National Circus School. But, after suffering an injury, was forced to find a new discipline on the ground. Bongiovanni was introduced to the Cyr Wheel (a large aluminum ring, not unlike an oversized hula hoop) and fell in love with the apparatus. She graduated from the circus school with the Cyr Wheel as her main discipline. Her solo Cyr Wheel act won the silver medal in 2013 at the Festival Mondial du Cirque de Demain in Paris. For LUZIA, Bongiovanni has constructed an act with a partner on the Cyr Wheel which overcomes the obstacles of a rotating stage, surrounding props and water. 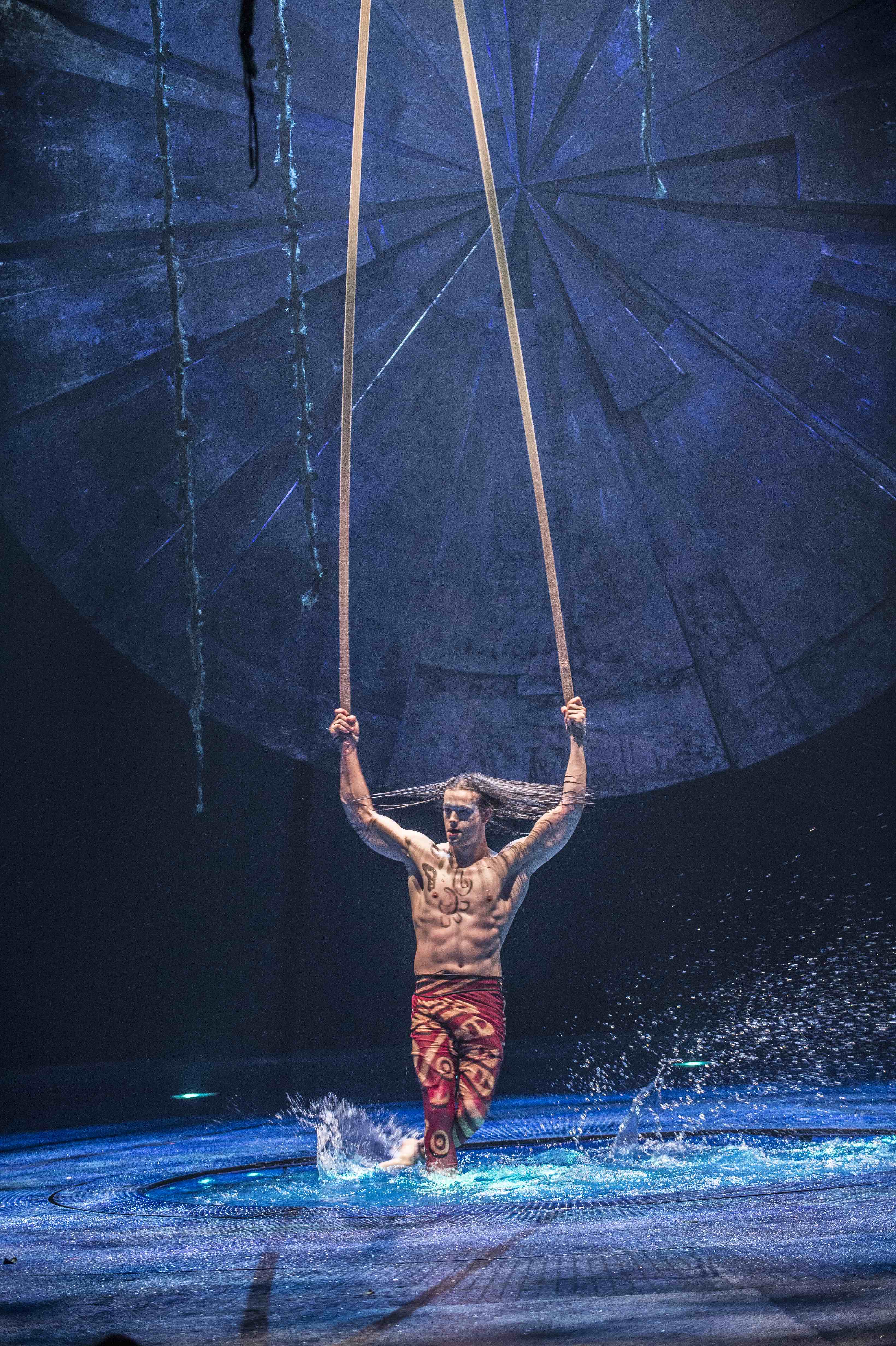 LUZIA is Courtenay‘s first major professional performance since graduating from the Montreal National Circus School in the Aerial Straps program. He began studying gymnastics at the age of five, but when he was 10-years-old, Courtenay fell in love with the circus arts after seeing Cirque du Soleil’s, Alegria. “I wanted to become a circus artist and use the skills from gymnastics in an artistic way,” Courtenay said. He has helped to create a non-traditional Straps act for LUZIA that combines acrobatic choreography amidst the element of water. 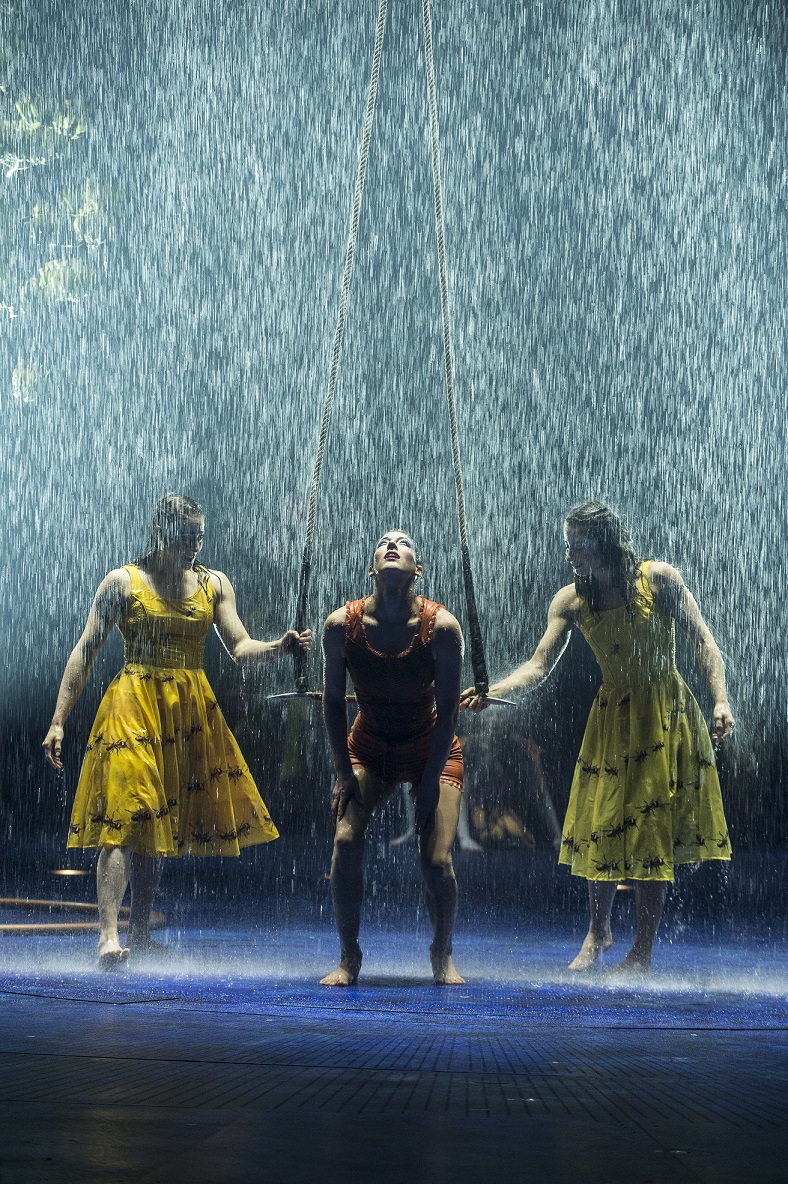 At nine-years-old, White began taking recreational classes at the Montreal National Circus School where she began to learn the basics of acrobatics, juggling, dancing and acting. She became enchanted by the art of Dance-Trapeze (where the ropes of the trapeze are attached to a swivel allowing the artist to spin in circles) and moved on to train in both the high school and college programs at the circus school. In 2015, White began creating a Cyr Wheel and Trapeze act for LUZIA, which is performed beneath a massive curtain of rain. 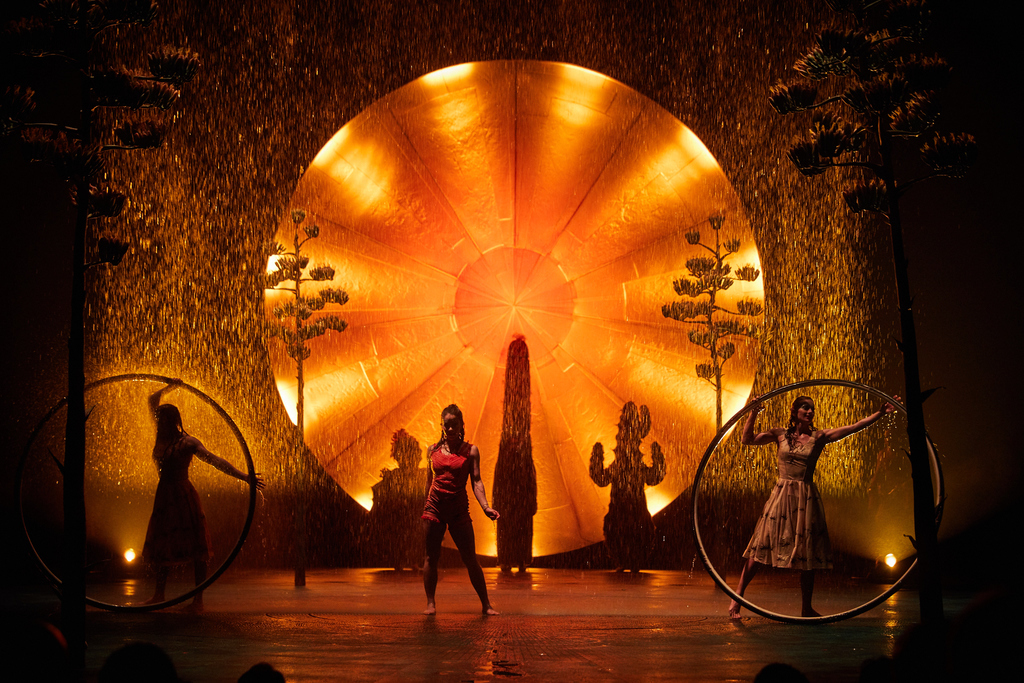 Bongiovanni, Courtenay and White are just three of the performers in Cirque du Soleil who will lend their circus talents to LUZIA, bringing a sense of magic and wonder to their individual performances. With the addition of water, the acrobatic performances will reach for new heights, overcoming elemental challenges while bringing a certain sensuality to each act. LUZIA hopes to touch the childlike sense of wonder in its audiences by tapping into memories of reveling in the rain. Bongiovanni, Courtenay and White all contributed to provide an inside-look at their water-immersed acts to 303 readers. Read on to see what it takes to create creative, element-defying circus delights in LUZIA.

303: How has learning to adapt your skills and acts to be performed in water changed how you approach your art? What were some of the challenges you experienced by incorporating water into your acts?

Bongiovanni: Cyr wheel is almost impossible to perform in the rain as it is a huge metal ring that would slip. For that reason, Cirque du Soleil created a wheel with a bike tire around it, which reduces the slipping. The stage was also treated to have more grip. The wheel is heavy and I had to adapt my technique to manipulate it and find ways not to slip.

Courtenay: I had to relearn the tricks and technique on the straps as the water makes everything heavier and slippery. Also, the stage is wet so even when creating the choreography on the floor you have to keep in mind that your feet will be wet, which makes you move differently.

White: For me, the water adds so much to my performance. I never thought about performing Trapeze in the rain, but it is so unique. You can feel the magic it creates for the audience. Working with water was a challenge. I had to develop an acrobatic vocabulary for the rain section of the act that would be safe, but still have the level of quality you come to expect from Cirque du Soleil. The trapeze I use in the show has been modified to be used under the rain. The ropes are [ones] that you would find on sail boats and the bar is made of wood instead of metal, which has way more grip when wet. 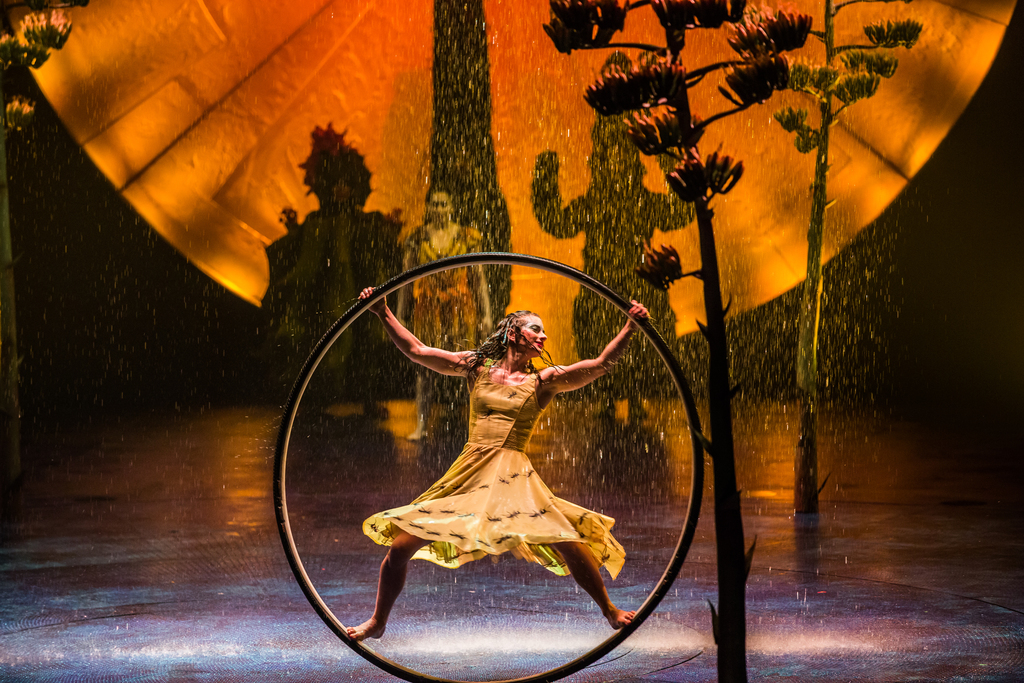 In addition to presenting individual challenges for its performers, LUZIA’s integration of the use of water in the show also presented massive technical challenges for Cirque du Soleil. The water used has to be filtered, disinfected and maintained at constant temperature of 82 degrees Fahrenheit. The production uses over 1,500 gallons of water which is reused for each show during LUZIA’s run in every city.

For safety’s sake, all of the metal-based infrastructure elements and any aspect of the show that requires electricity to operate has to be secured against the risk of electric shock. LUZIA’s water reserve is suspended on a bridge 46 feet above the stage and wields 174 nozzles which are controlled to create two-dimensional images using water droplets and blank spaces. The entire apparatus can rotate 360 degrees. The water in the basin is channeled to the bridge apparatus from a 660-gallon external tank where it is treated and then pumped to the bridge. 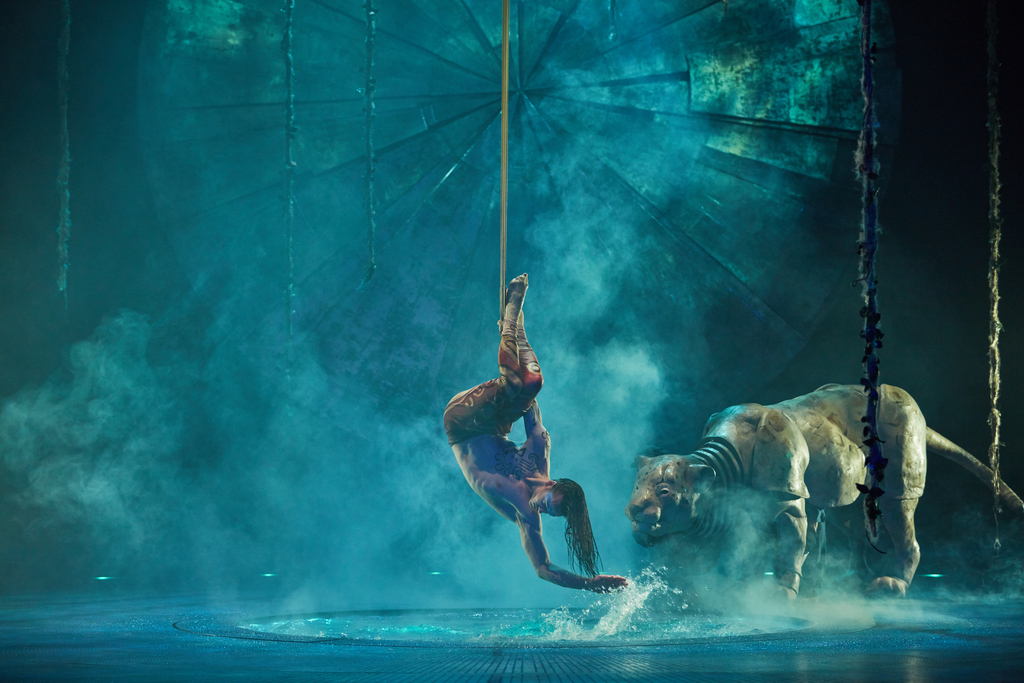 Bongiovanni, Courtenay and White all agree that LUZIA is a very unique and positive production that showcases the beautiful colors, faces and sounds of Mexico. They hope that Denver audiences will leave the show with a feeling of inspiration and memories of a truly unique experience that they can treasure for a long time. The use of the element of water promises to bring a refreshing splash to Cirque du Soleil’s famous circus show. Denver audiences should prepare to be saturated by LUZIA’s spectacular circus spectacle this summer.