Curious Theatre Company‘s motto is “no guts, no story” and its current play is no exception. Written in a fury only two weeks leading up to the election of Trump, Building the Wall is a modern play that uses history as a warning. The playwright Robert Schenkkan was inspired by the book Into the Darkness—a biography of Franz Stangl, one of the four commanders in charge of Nazi extermination camps, and by present day events that seem to him to be headed toward nightmarish ends. In writing this play, Schenkkan undoubtedly takes a political stance and Curious Theatre Company whole-heartedly stands behind him, admitting to it being a “protest piece.” But, the exact political stance is probably not what one would expect—that is, it’s not a play all about bashing Trump—instead, the message focuses on individual action in moments of collective inaction.

Set in a prison meeting room in El Paso, Texas in 2019, Building the Wall consists of an interview between a professor and an inmate awaiting trial for being part of horrific events that resulted from private prisons detaining illegal immigrants. The inmate had previously been the commander of one of the private prisons in charge of detaining illegal immigrants and is facing time for his role in things going wrong (no spoilers in this article.)

The interviewer Gloria is a black woman, a history professor and one must assume, a Liberal. The inmate Rick is a white man, an ex-military cop and one must assume, a Republican. With a table situated in the middle of the stage, chairs on either end, the table becomes a border itself, between her and him and everything they stand for. But that border is crossed a few times during the hour and a half show, in crescendoed moments between the characters. And it lends to an overarching theme that communication and communion cannot be accomplished unless barriers are more like guidelines. 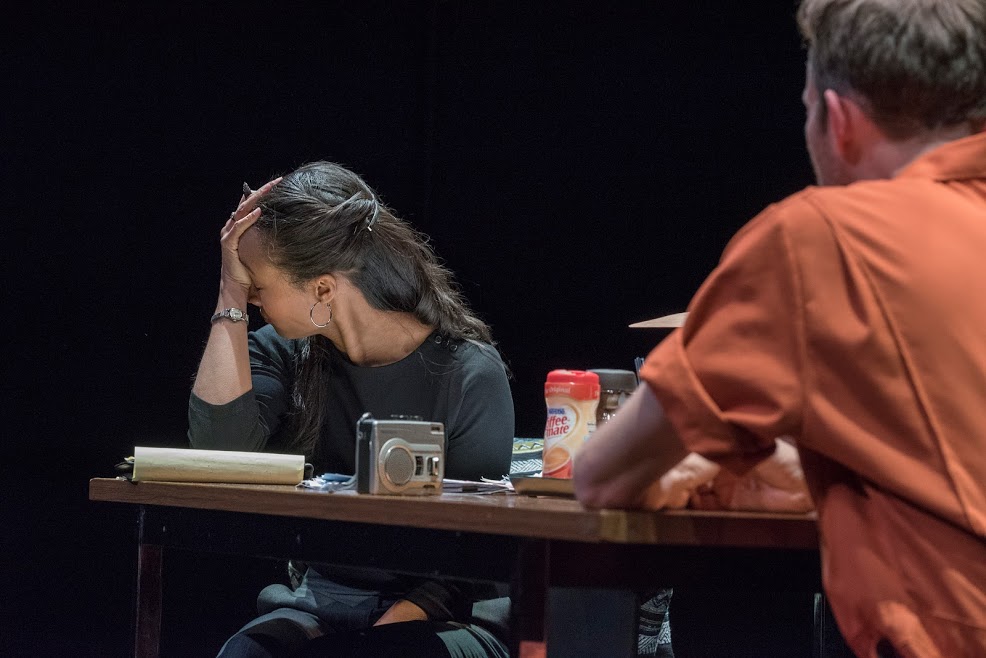 Gloria, performed by Brynn Tucker, wants to understand how and why certain things came to pass after Trump became President because she sees the magnitude of it, historically speaking. Rick, performed by John Jurcheck, gives her insight not only with his intimate recounting of the terrifying events but also by how he recounts it. His remorse is muddied by his lack of personal accountability, and in that mess lies the heart of this play. Schenkkan only needs two characters to deliver the message that personal accountability is essential to personal freedom. There is more danger in blaming a single person (in this case, Trump) because it makes that person more powerful.

Curious Theatre Company decided to produce this intense play just nine weeks ago— most plays require months or even years of rewrites and workshops and rehearsals. But, as artistic director Chip Walton said, “the timing and logistics of opening it right away were a challenge to coordinate but the times do not permit us the ease of waiting. The theatre community must add its voice immediately with the urgency of what is happening in our country everyday, and we all felt that it was our civic responsibility to produce this piece immediately.”  Denver is the second stop in the world tour of this production, after the premiere in Los Angeles.  Next up in the tour will be Washington D.C., Santa Fe, Tucson and Miami.

The timeliness of this performance is unlike most other theatrical productions. And though it may seem one-sided in ideology, all party affiliations would benefit from seeing it because it is the kind of art that opens dialogue. And Curious likes to open dialogue, with Talk-Backs after each of its shows. In these Talk-Backs, special guests, actors and the audience discuss the implications of the production, ask questions and collectively wonder what to do next. For Building the Wall,  the Talk-Backs include an array of people associated and involved with refugee and immigrant aid organizations including Jennifer Gueddiche, Director of Programs for Spring Institute, Nina DiSalvo, Executive Director of Towards Justice and Laura Lunn, Managing Attorney for Detention Program at Rocky Mountain Immigrant Advocacy Network, among others.

It would be unwise to shrug off this play as just another protest over President Trump because it is so much more. Really, the people who need to see it the most are probably the least likely to find it appealing. So if you know someone who fits that bill, take them to see it before it’s too late.

The play is a little over an hour long and begins at 6:30 p.m. each night. For more information, visit this website. These are the performances with tickets still available: