What you Missed from DINK Comic and Art Expo 2017

The second annual Denver Independent Comic and Art Expo (DINK) took over the McNichols Building in Denver’s Civic Center with three floors full of independent artists this past weekend. The second and third floors were flooded with some of Denver, and beyond’s, most talented independent artists, zine writers and comic creators. The lower level played host to workshops and live panels where guests were treated to learning opportunities and inside discussions on various aspects of creating indie art.

The two-day convention was packed with events to take part in and sights to see. With over 200 artists in attendance, one would be hard-pressed to walk away and not be inspired to go out and create something. DINK’s well organized and laid-back atmosphere was immediately inviting. There was a particular ease in the flow between scheduled workshops and panel discussions that you just don’t find at larger conventions.

Take an inside look at two of DINK’s discussion panels, discover the simplicity of creating your own zine, and get a glimpse of the famous Love and Rockets creators, the Hernandez brothers. 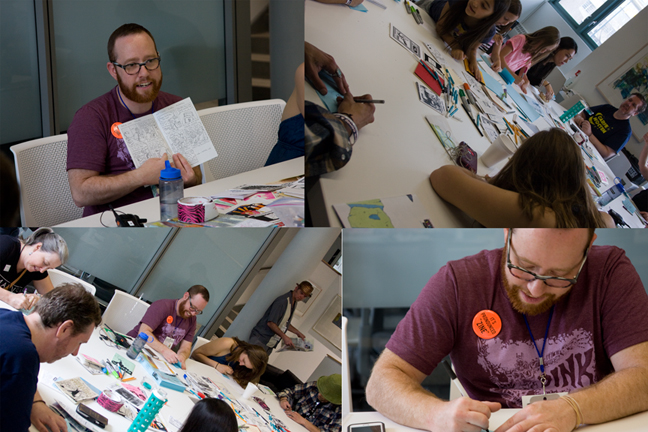 Who better to instruct the next generation of zine creators than the co-founder of the Denver Zine Library, Kelly Shortandqueer? He started the zine making workshop by passing out a variety of zines crafted in black and white and color, bound with ribbon or staples. Shortandqueer showed that the do-it-yourself possibilities of zine creation are numerous and easy to accomplish. In the pile of zines he presented, there was even one created on a roll of duct tape.

“For me, one of the great things about zines is I get to have a voice without editing from others,” Shortandqueer said.

Participants enjoyed the opportunity of creating their very own mini zine during the workshop. When asked what advice he would give to people thinking about starting their own zine, Shortandqueer had this to say, “Just do it.” 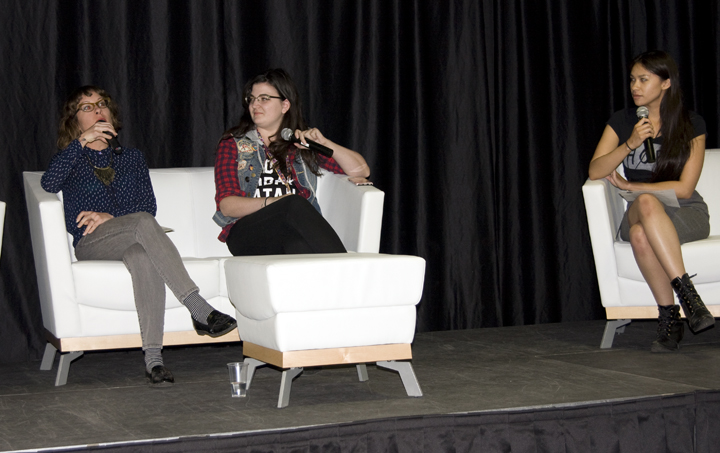 All too often, those who proclaim that they are feminists are portrayed as promoting hate against men. Both Zellers and Shwed pointed out that that perspective is skewed. “A lot of things equate feminism with hate. It’s all about love, really,” Zellers said.

“Feminism shouldn’t be scary. It’s just about equality across genders,” Shwed said. Both panelists went on to explore the idea that just because a woman expresses anger at a particularly flawed system with assertive confidence, it does not mean that it comes from a place of hate.

The artists also touched on the ever-present debate of whether or not female characters’ bodies are still too hyper-sexualized in comics today. They pointed out that there is nothing inherently wrong with basing female characters on a sexually confident and arousing woman, but that problems come into play when that icon is then translated into being the ideal image of a woman. Moderator, Bad Hand then asked what the right way to portray a female character would be.

“There is no one single portrayal [of a real woman]. There’s no one real answer,” Shwed responded. The best way to promote feminism in comics is to portray strong, intelligent and confident female characters who hold powers or positions equal to those of their male counterparts, which is something that has become more prominent through the forum offered by independent comics. 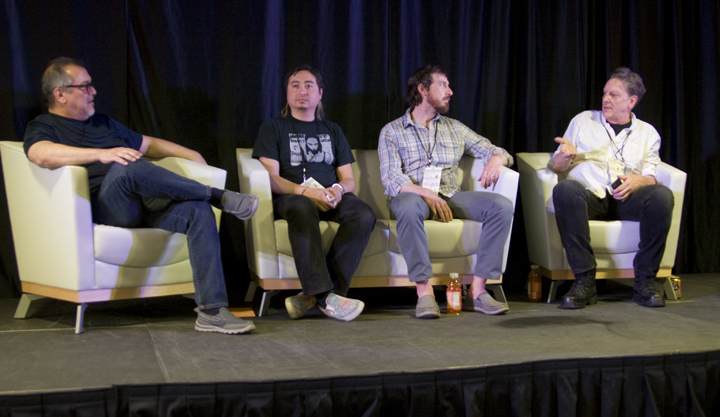 Some of indie comic’s most prolific artists came together to discuss just what it takes to keep creating. Panel guests included two of the greats. One was Tony Millionaire, the creator of Sock Monkey and Drinky Crow as well as the comic, Maakies, who has been creating comics for over 40 years. The other was Gilbert Hernandez, of the famous Love and Rockets comic, who has been creating for 40 years as well. Also on the panel was Justin Madson, who has been creating and self-publishing comics for over 15 years and Vance Feldman, creator of the ForeverScape, a hand-drawn work of connected panels that has reached the length of three football fields.

Each artist began creating comics and art in a variety of ways, but they all agreed that perseverance and dedication to their art is what keeps them going. 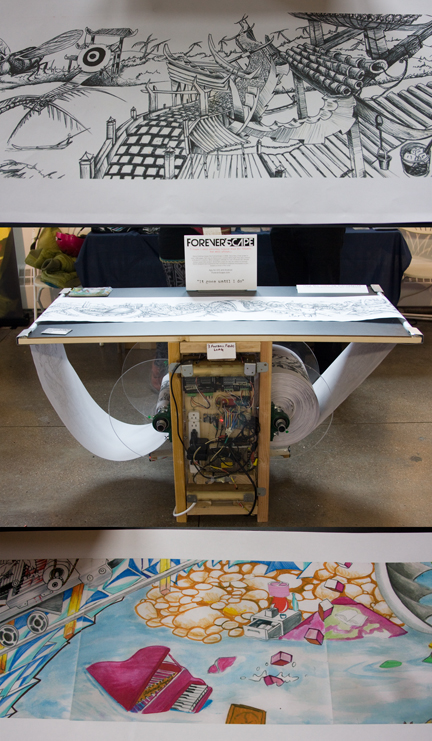 Vance Feldman’s ForeverScape running on a motorized loop apparatus of the artist’s own creation.

“I was drunk,” Feldman said, joking in response to how he started ForeverScape. A software developer by day, Feldman had been recently laid off and bought a ream of paper on which he started doodling and just kept going. Now, over seven years into the project, ForeverScape is longer than the Titanic and still growing.

Hernandez didn’t want to get a real job so he kept at his art until it became more and more successful. Madson had initially wanted to be a filmmaker but lacked the circle of friends needed to create films and decided to delve into comics instead.

Sometimes the perseverance to keep going comes from not knowing how to do anything else, as Millionaire implied. He also said that realizing that as artists there will be times of struggle and being able to embrace that fact is important. 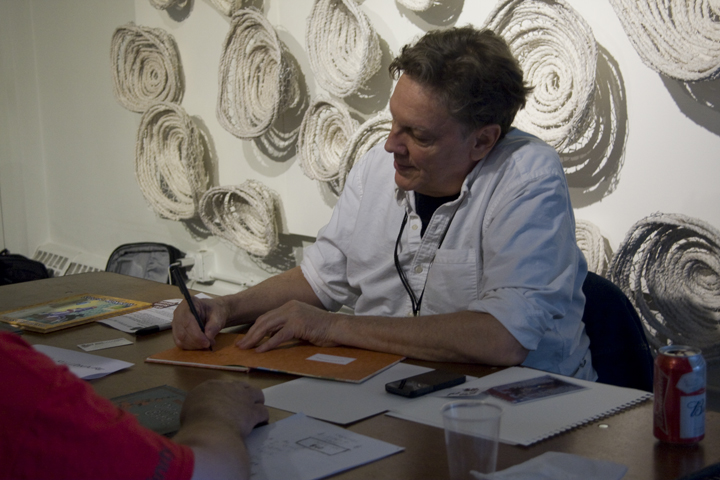 “You’ve got to suffer. If you’re not suffering you’re not working.” Millionaire said.

When asked how to endure criticism, Madson said, “When you worry about how people will perceive your work you get yourself in trouble. You have to stand behind it no matter what.”

Hernandez works on his art seven days a week, with occasional breaks to get away with family. However, he remains steadfast and dedicated to creating. “I haven’t been bored in 40 years,” Hernandez said.

Celebrating 35 Years of Love and Rockets with the Hernandez Brothers 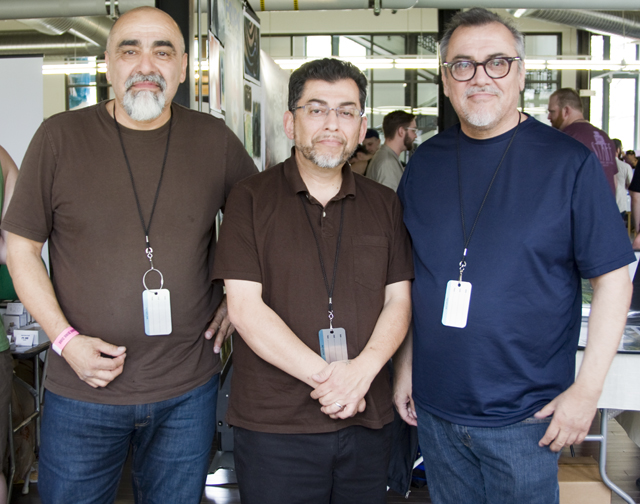 Left to right: Mario, Jaime and Gilbert Hernandez, creators of Love and Rockets.

Gilbert, Jaime and Mario Hernandez are the creators of the enduring fan favorite comic, Love and Rockets. The brothers grew up in the small agricultural town of Oxnard, California. All three artists immersed themselves in comics growing up, but as they reached adulthood, they were more interested in what was happening in real life than what storylines their long-loved superheroes were exploring.

With Love and Rockets, the Hernandez brothers explored a new way of looking at pop culture. The brothers self-published the comic in 1981. It was perfect timing as readers began to develop a taste for more tangible and real stories.

Love and Rockets is made up of many ongoing consecutive stories mixed with one-offs and short stories. The comic was published in a quarterly magazine format on Fantagraphics Books from 1982 to 1996.

The brothers pushed one another, not in a competitive way, but through their storytelling. “The art was elevating and you had to keep up,” Gilbert Hernandez said.

Gilbert and Jaime’s artistry grew and grew over time. Whereas, Mario’s priorities began to naturally shift as he started a family. It then became Gilbert and Jaime who continued working on Love and Rockets. Where Gilbert will have an idea for an outcome of a tale and creates a story around that, Jaime prefers to let his characters do the writing for him.

For the past 10 years, Jaime and Gilbert have been publishing Love and Rockets as an annual at around 100 pages per issue. However, this year, they have returned to their original quarterly format promising 30 plus pages an issue. Both Jaime and Gilbert lit up at the prospect of being able to draw more covers by returning to the original format. With such love on their faces when talking about their art, fans can expect a lot more Love and Rockets to come.

All photos by Sarah Boger Photography unless otherwise noted.