This month, Denver art lovers have the opportunity to dive into Aquatique, a new exhibit at Bitfactory Gallery located in the Santa Fe Art District. Gallery owner, Bill Thomason, has combined the talents of photographer and mixed media artist Gina Burg with those of illustrator and painter Elle Powell to explore aquatic themes from around the world.

Denver native, Gina Burg, has spent over 15 years behind the camera lens developing her craft. With the onset of new camera technologies, Burg has been able to explore her passion for aquatic landscapes, specifically those found beneath the water’s surface. 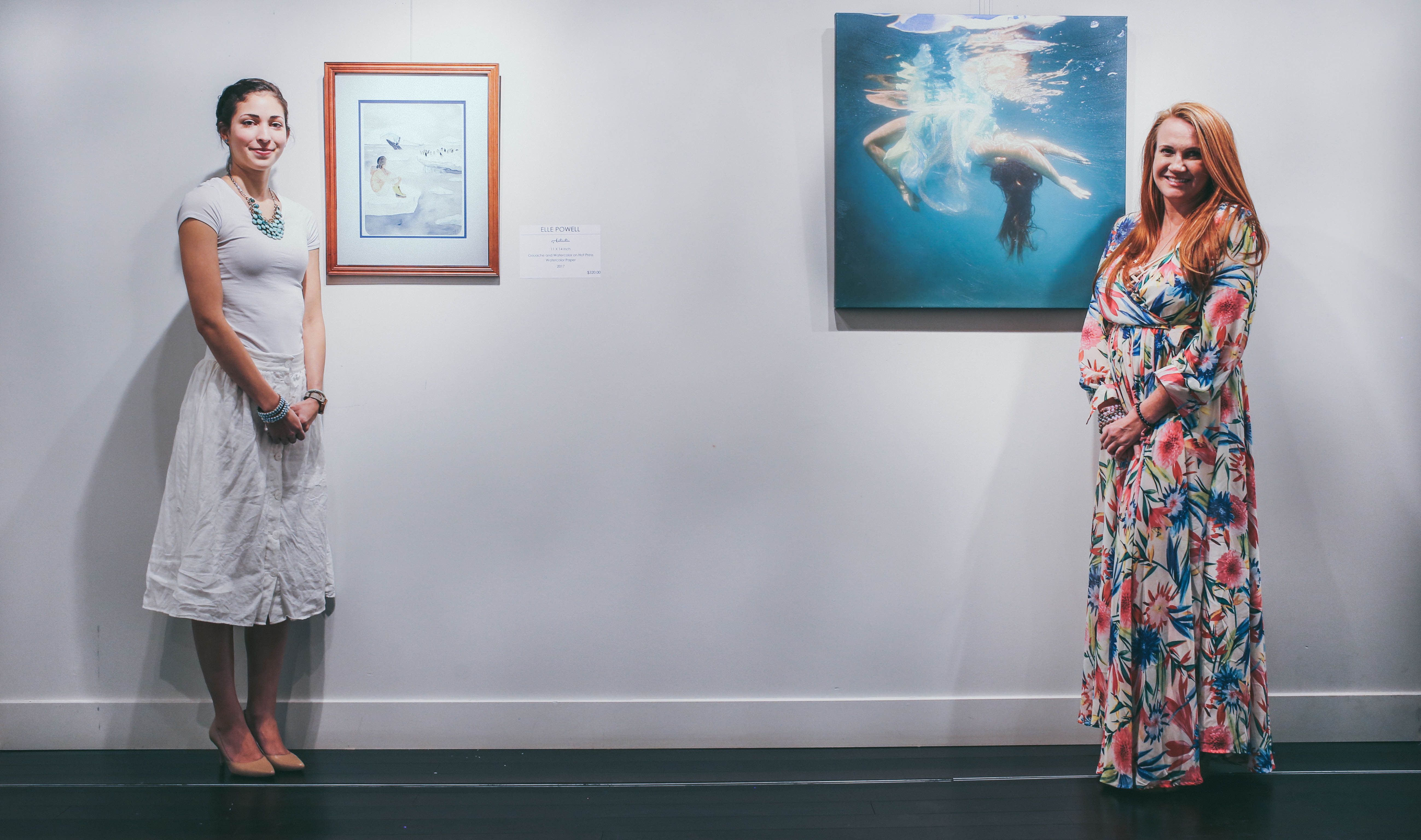 Elle Powell, left, and Gina Burg, right, at the opening of Aquatique at Bitfactory Gallery. Photo by Danielle Webster.

“I’m obsessed with water and the emotion that you get from it. My favorite thing is to sit on the ocean, a lake, or anything – and you feel so small, it’s just so powerful,” Burg said. 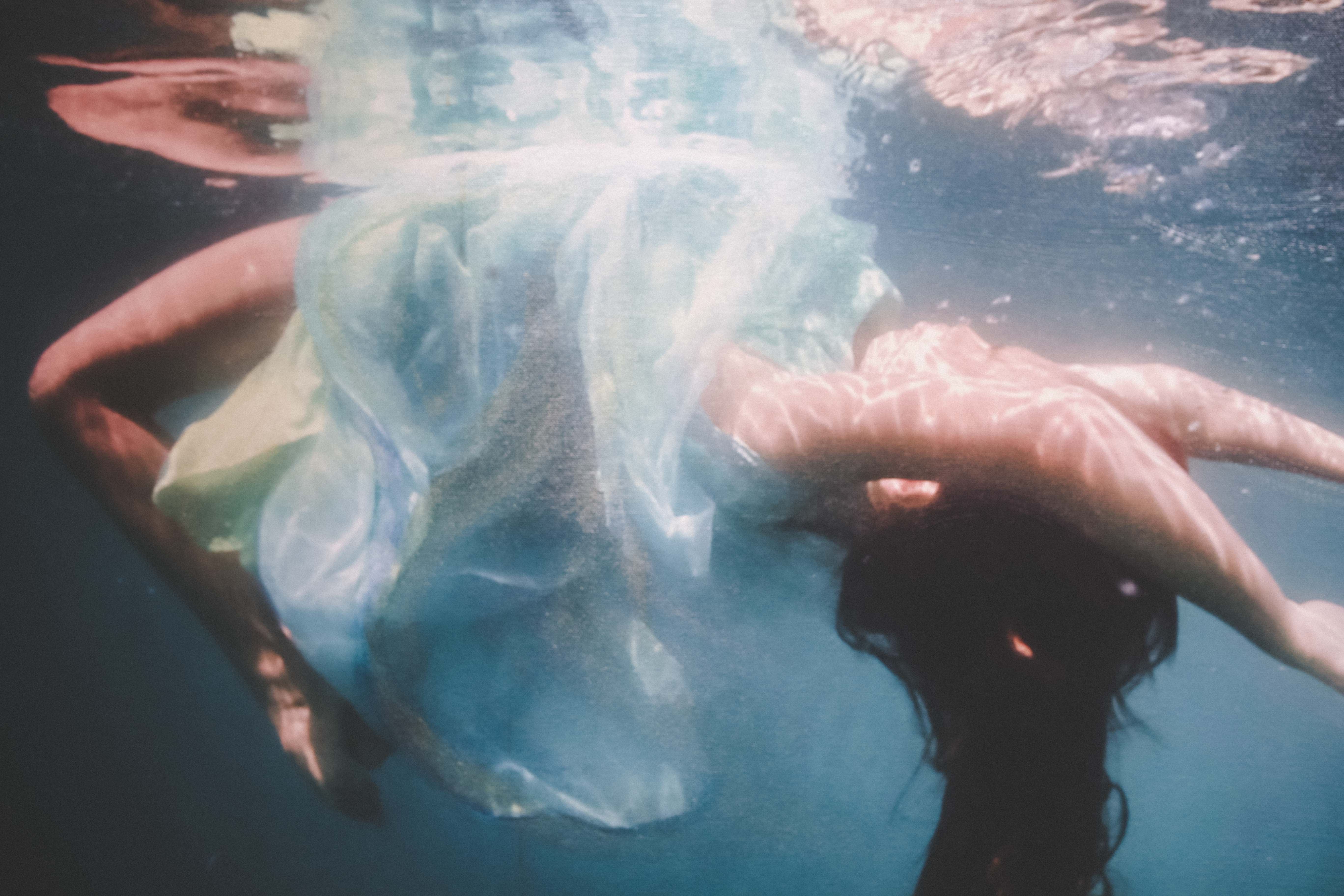 Burg takes her work beyond mere photographs by blending the mediums of digital photography with those of graphic art and painting. This melding results in canvases full of light and motion where the real and surreal meet, creating dream-like pieces highlighting the elemental beauty of water.

Having worked in many galleries, Burg has been exposed to a variety of artistic techniques over the years. Inspired by another artist who used paint to highlight portions of light upon photographs, Burg decided to take the technique to another level. She creates photographs that are printed on canvas and then applies elements of paint to form unique mixed media compositions.

Many of Burg’s pieces feature images of her daughter and niece suspended in the underwater environments of Florida and Hawaii. Burg and her niece, a professional ballerina, ventured out into the depths of the Jupiter inlet in Florida to achieve some of the captivating images featured in Aquatique. Over an exhaustive four-hour diving session, Burg captured stunning images of the ballerina delicately floating upon an oceanic stage. 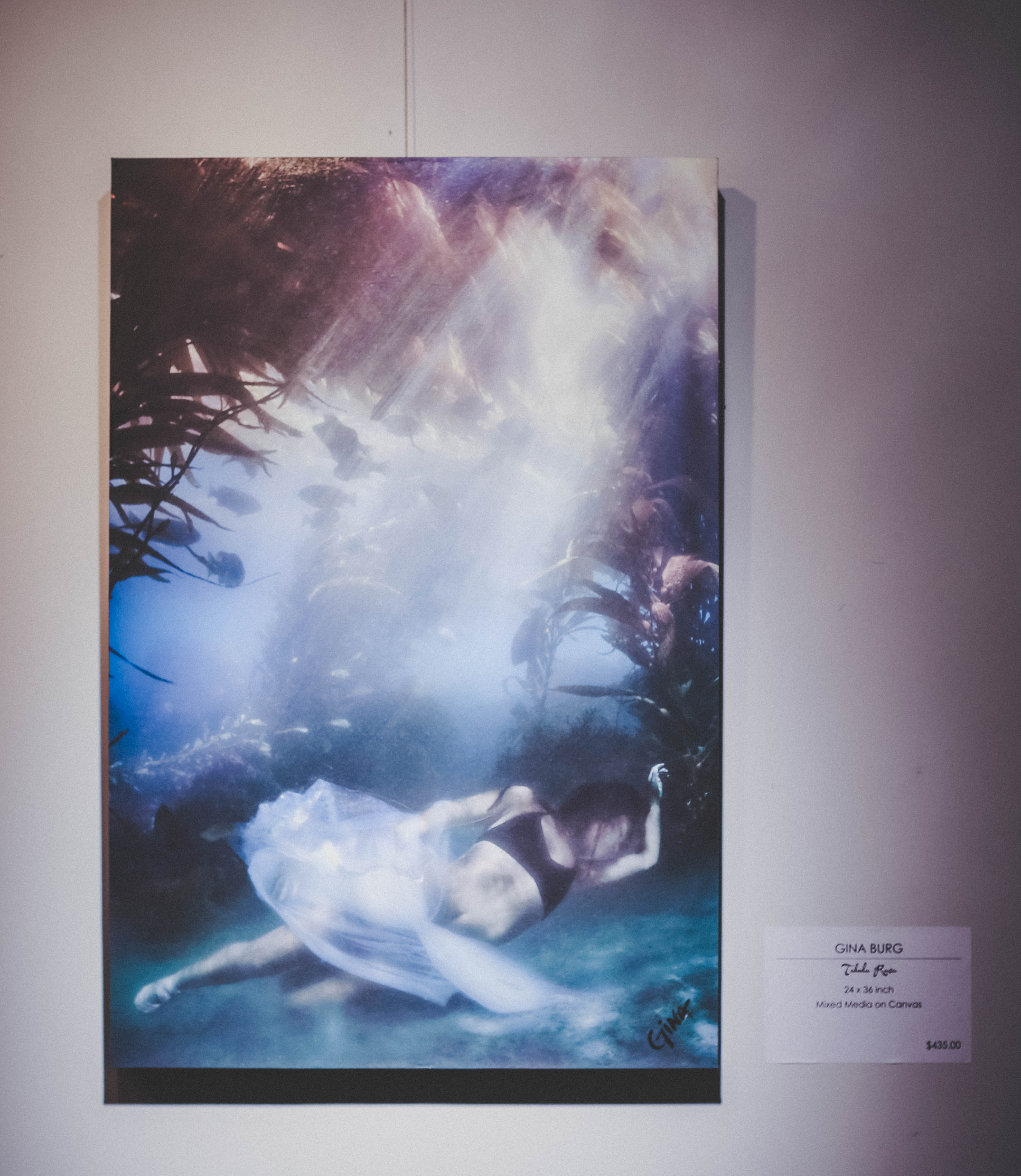 While Burg’s art portrays the nature and landscape of water in an elemental way, Denver native, Elle Powell takes an entirely different approach. Powell grew up with an appreciation for illustration and a love of drawing. Despite having studied fine art and philosophy at Occidental College in Los Angeles, Powell didn’t pursue art fully until much later after graduating.

Powell has a space in one of the many studios offered above Bitfactory Gallery where she cultivates her art. She also shows her work around Denver as well as most recently in Australia. Her work has been commissioned by various patrons, including John Frieda, She Magazine and for private collections around the world.

The pieces by Powell in Aquatique were all created exclusively for the exhibit. “My idea was to embrace the different ecosystems that thrive because of water. Each piece is inspired by a different type of body of water around the world,” Powell said. 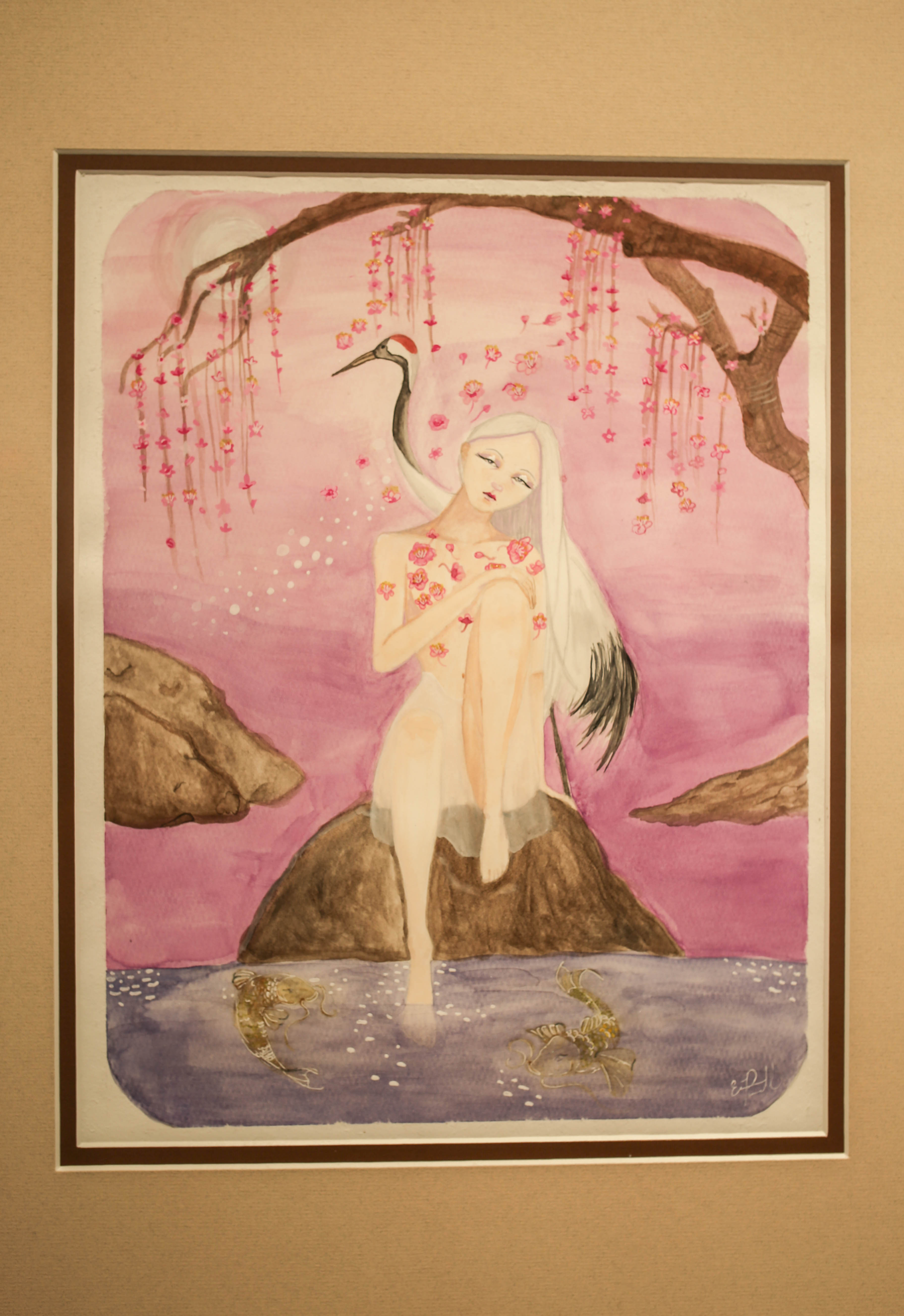 An extensive traveler, Powell’s work features watercolor and gouache scenes depicted from around the world with aquatic elements. In each piece, a female figure is portrayed against a backdrop of various bodies of water across the globe. From Antarctica to the Amazon River, up to the Louisiana Bayou and over to Victoria Falls in Africa, Powell depicts the serenity of each location through the elegance of her artistic composition.

Neither Burg or Powell desire to convey any particular conservationist message with their exhibit, but they do encourage viewers to be inspired by the inherent beauty that is found in the world’s aquatic landscapes.

“I hope that people find beauty in all of our images. One of the things I love about art is seeing an image and being touched — finding beauty in it and escaping from your troubles of the world for a moment,” Powell said.

Burg added, “I really want people to travel and see things. It really opens your eyes. It’s a beautiful world. I want people to be inspired to go out and see places, do things, and get in the water.”

Dive into the underwater art of Aquatique through March 31, 2017 at Bitfactory Gallery located at 851 Santa Fe Drive in Denver.

Author’s Correction: It was previously incorrectly stated that Elle Powell featured a line of stationary at Lana’s Shop, this information has been removed to accurately reflect the artist’s commissions. 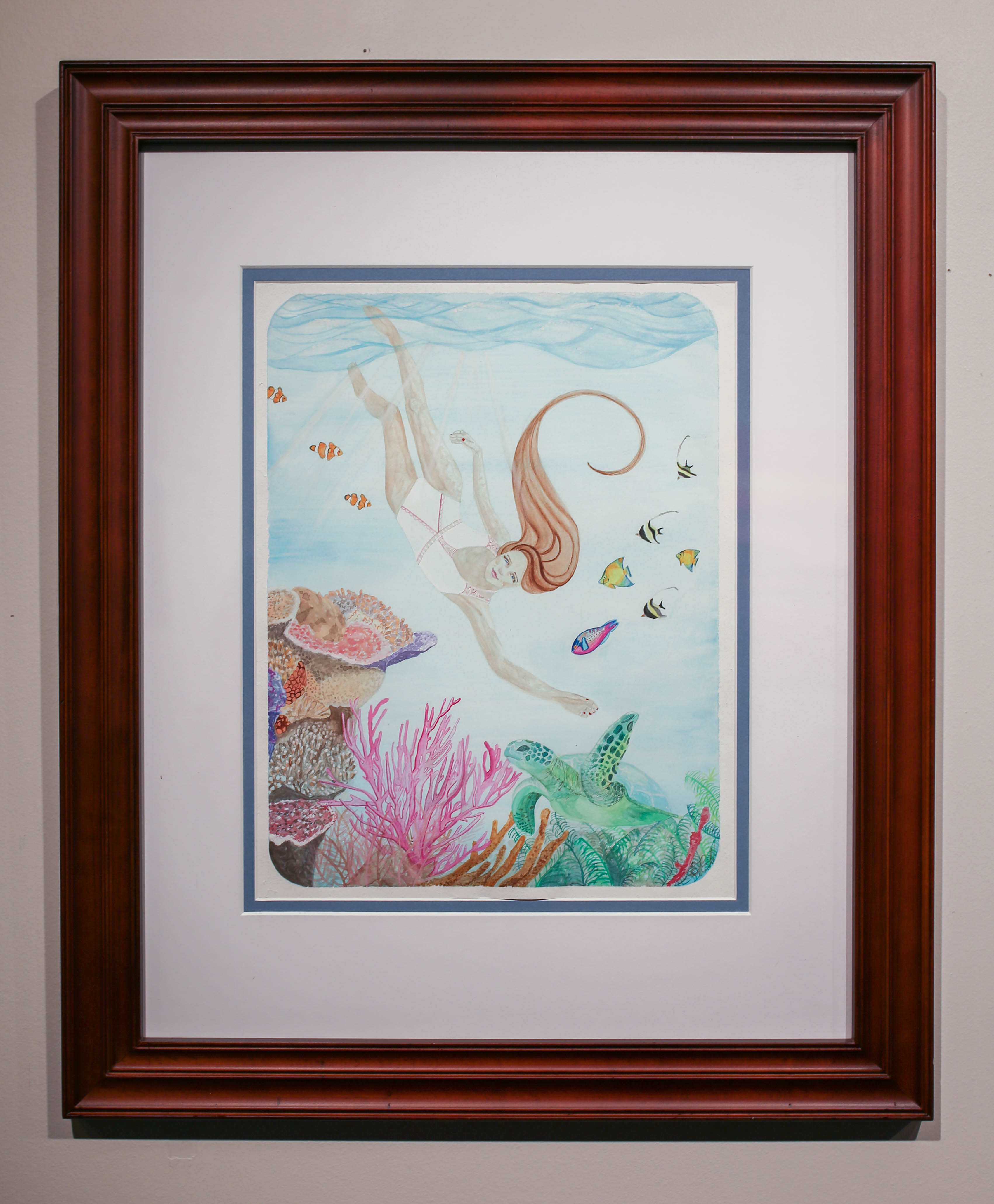