On November 13, The Clocktower Cabaret hosted its first in-house produced queer burlesque show, QUEER-Lesque: A Glitter Revue. Naughty Pierre, famed emcee and producer of burlesque shows, was inspired by the Fierce! International Queer Burlesque Festival, which The Clocktower Cabaret played host to earlier this year. He sought out Clocktower performers, Indy Fire and Shotza Ouzo, two of Denver’s queer community performers to produce a show that would showcase the diversity of Denver’s burlesque performers in one giant, glitter-filled production.

Shotza Ouzo has been performing burlesque since 2007 on her home stage at The Clocktower Cabaret. Her often comedic routines have won the hearts of audiences and she has produced charity burlesque shows for various animal shelters. Indy Fire is one-third of Burning Loins Boylesque, a boylesque troupe born out of Ooh La La Presents‘ Boylesque show held at 3 Kings Tavern in Denver. The two performers came together to create a show where they could explore their mutual passion for the creatively diverse culture of Denver’s queer burlesque scene.

Denver’s burlesque scene is ripe with LGBTQ talent that is diverse, creative and pushes the boundaries of what burlesque is and should be. Although this talent is spread throughout the state, it is not often that Denver audiences are treated with the rare opportunity to see it all in one venue on one night. QUEER-Lesque gave Denver audiences such an opportunity. Beyond the entertainment value for audiences, there was also a sense of true community built of love, acceptance and creativity as performers were able to express their art and come together as one.

“This show always had a deep meaning for the two of us from day one. We are definitely steeped in this community of queer culture. It’s important for us to create a show that celebrates it and just tries to create as much love and support and openness and diversity [as possible],” Fire said.

With the recent events concerning the Presidential election, Denver’s LGBTQ community was in need of entertainment in a space that was safe, celebratory and unified. A need which was aptly filled by the production of QUEER-Lesque.

Read below to relive the highlights of the diversely beautiful show that brought out a multitude of talented performers from around Colorado and beyond.

Burning Loins Boylesque is a Denver-based trio that formed as a result of its members, Indy Fire, Charlie Valentine and Bender Flames meeting at Ooh La La’s Presents Boylesque show in March 2016. Since then, the group has performed together and as solo artists at various venues around Denver and other states. The trio has gained in popularity creating a newfound appreciation for what boylesque performers can offer audiences. 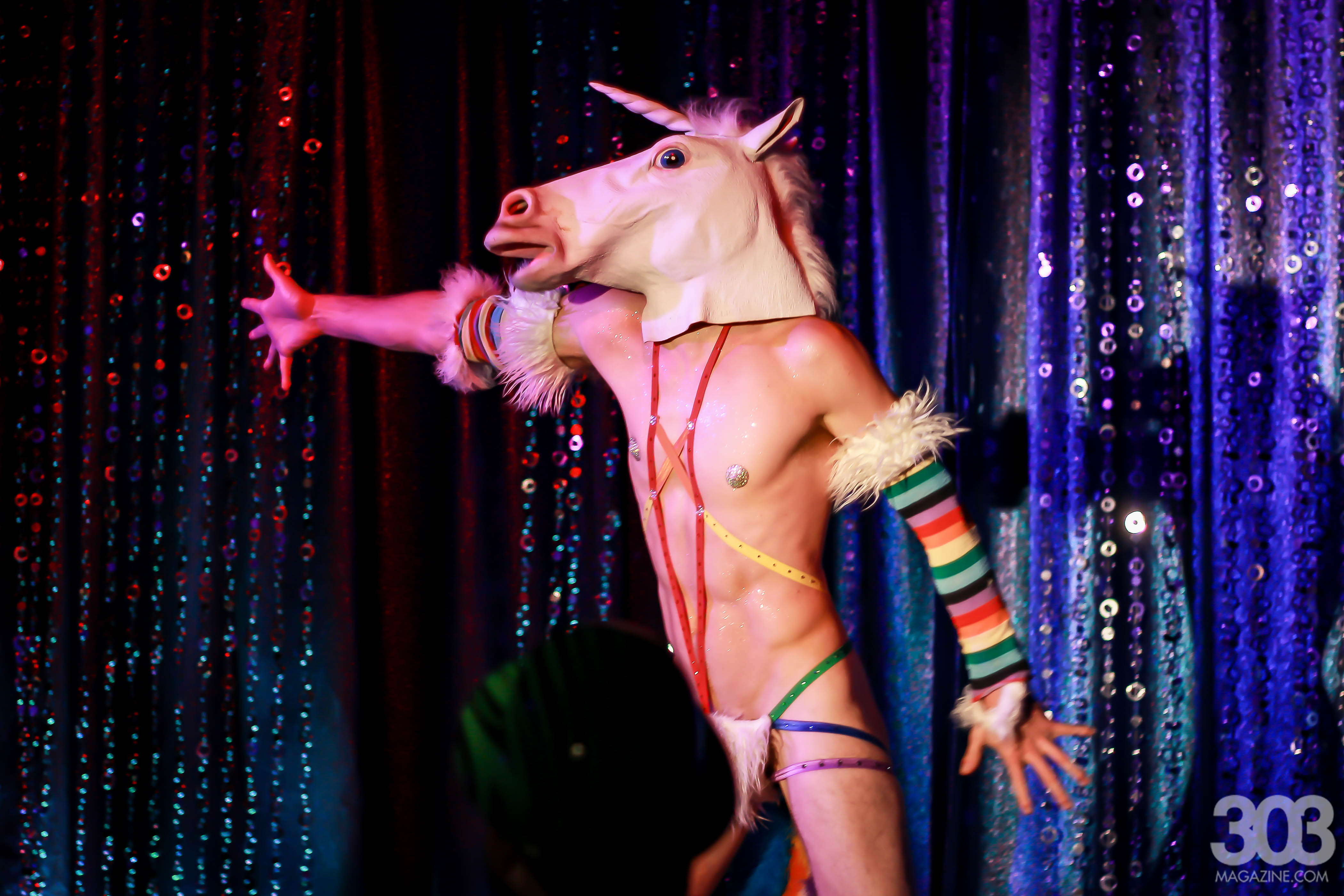 During QUEER-Lesque, each of the trio’s members performed a solo act to raucous applause. Bender Flames opened the show with a unique unicorn act displaying a tantalizing seduction clad in rainbow arm bracers and thigh highs. 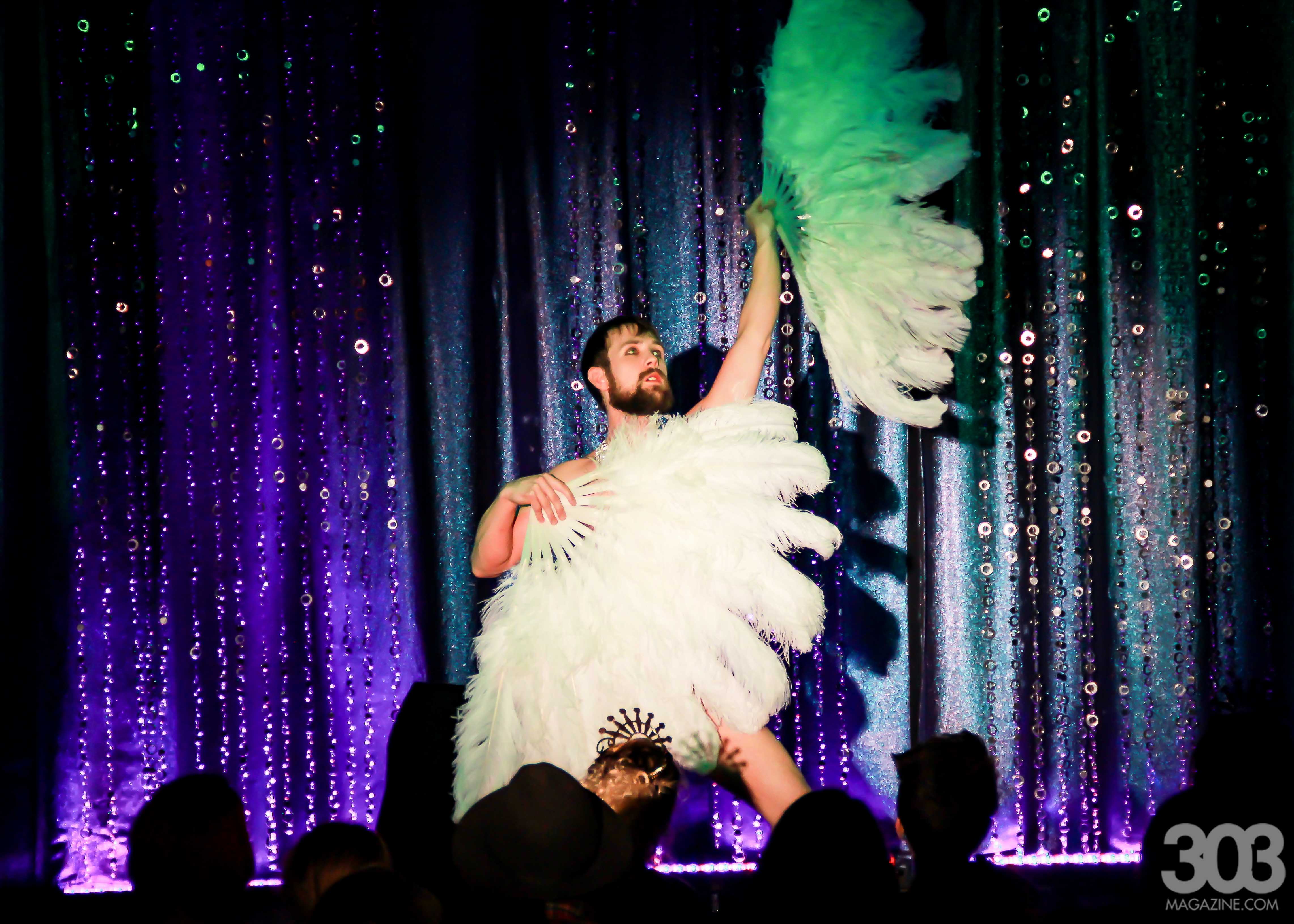 Charlie Valentine taught the audience that feather fan dances aren’t just for those of the feminine persuasion as he delicately disrobed bedecked in jewels. 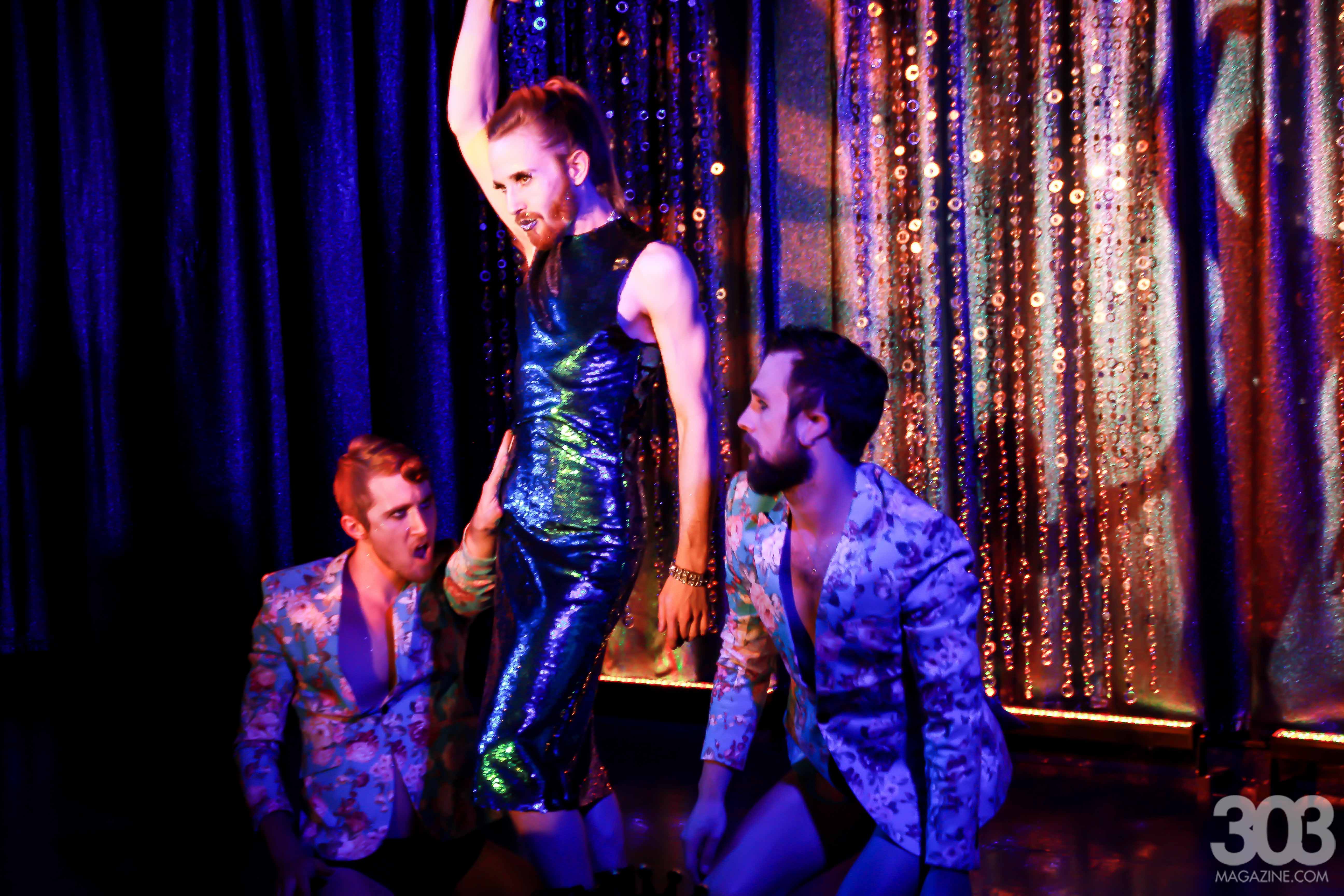 Indy Fire in his sequined splendor as Bender Flames and Charlie Valentine assist.

Indy Fire commanded the stage with such fluidity and grace all while wearing a divine dress with sequins that metamorphosed right before the audience’s eyes. 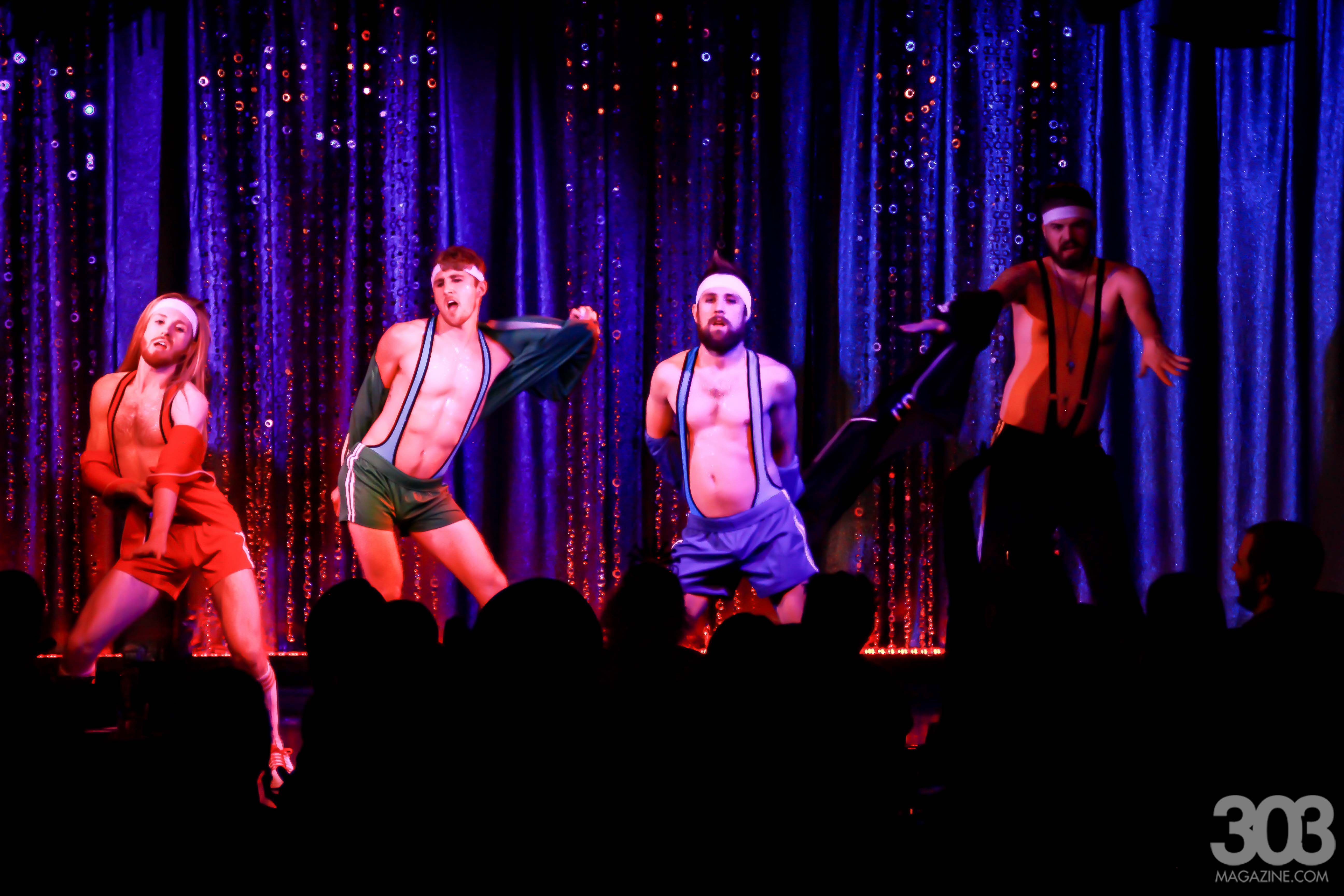 The trio came together to make everyone in the cabaret sweat with their group number featuring a guest performance by Coach Bones, aka Dr. Bones. Each act proved that the boys have just as much talent as the women. 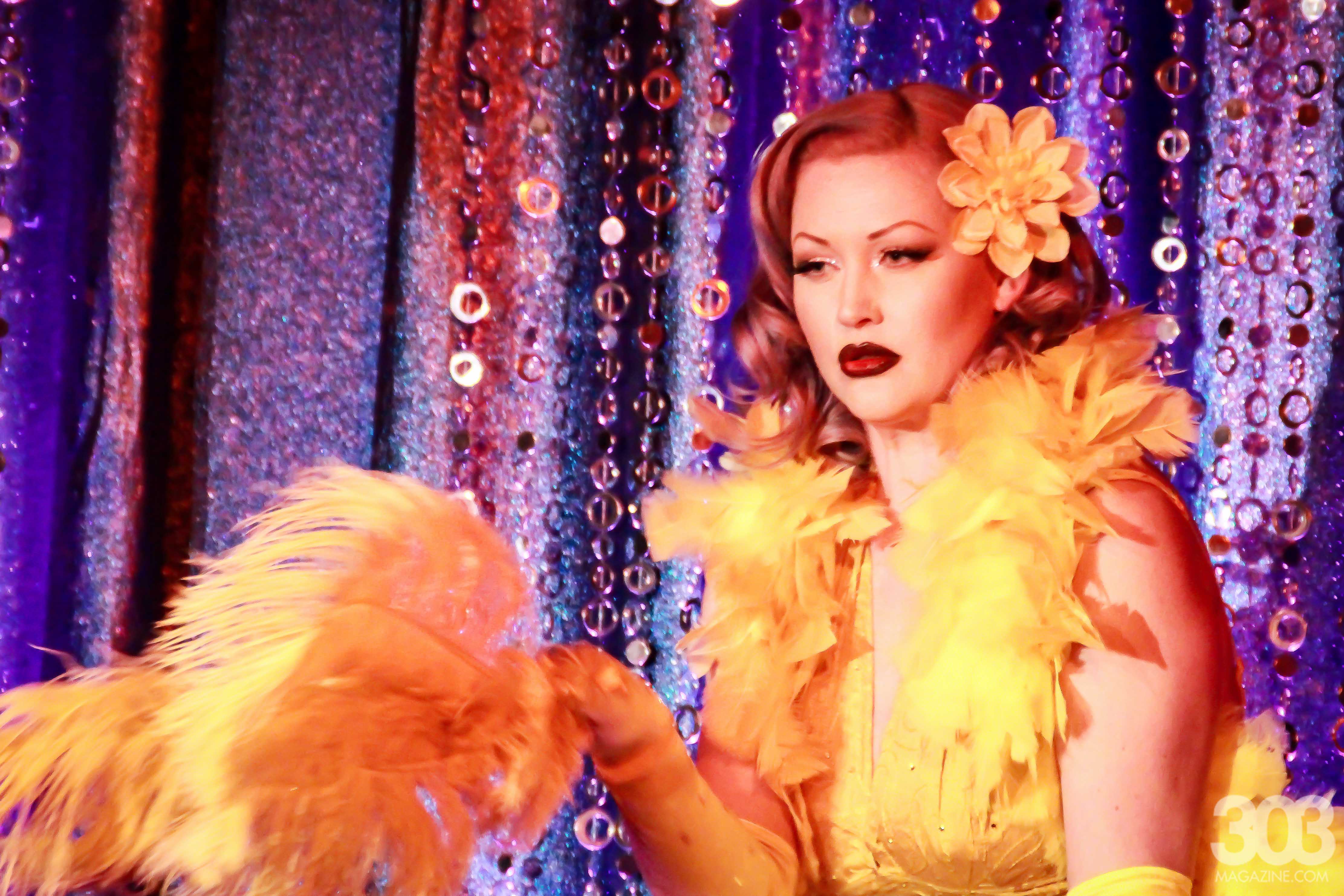 Kitty Crimson and her partner Shantastic, two of the producers of Ooh La La Presents and Crimson Burlesque, heated up the stage with their closing act to the film Moulin Rouge‘s version of Roxanne. Kitty Crimson also performed one of her signature “hat-trick” solo acts with the precision of the seasoned entertainer she is, every beat of the song coincided with the beat of a heart as she expertly peeled and revealed. 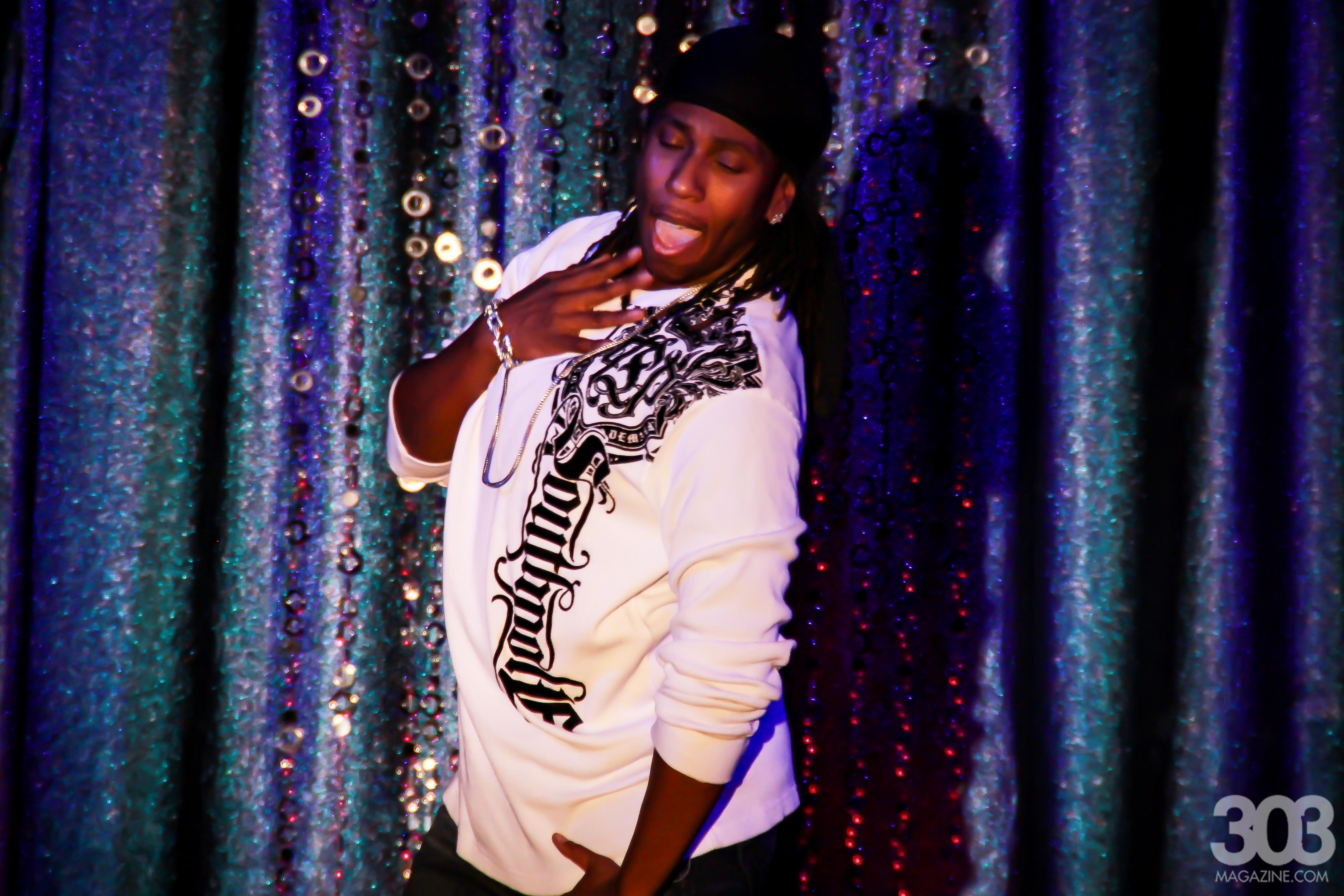 Bootzy Edwards Collynz is the resident drag king and DJ at Trax in Denver. Collynz brought his double hip-hop flavored performances to the Clocktower stage making the audience feel as though they were part of a music video and thoroughly entertaining all. 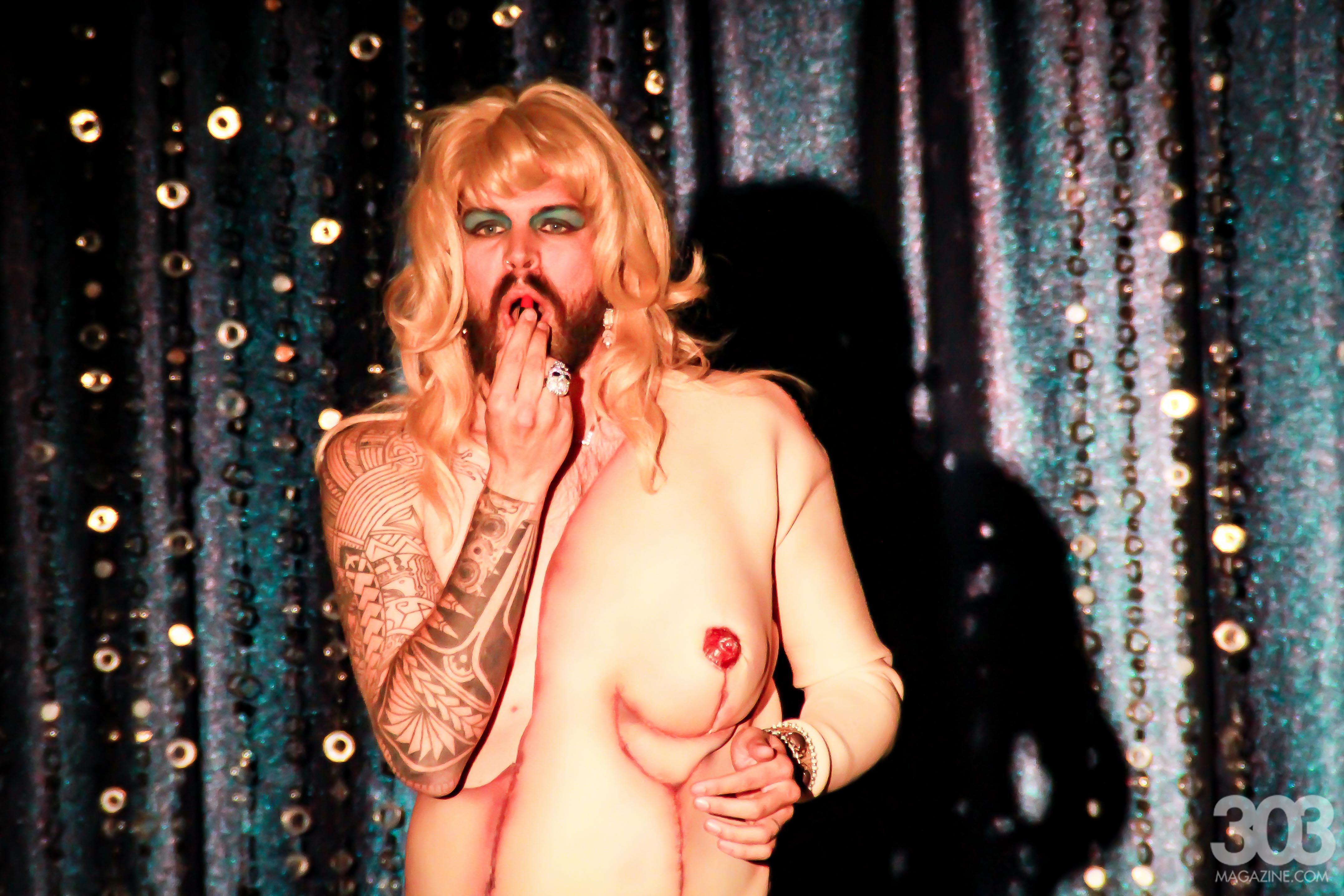 Dr. Bones is a regular performer at The Clocktower Cabaret and a member of the Clocktower Cocktails. He is well-known for his gorelesque performances where he combines his love of horror and burlesque. Dr. Bones slayed the audience with his Silence of the Lambs act. As if that wasn’t enough, he also made an appearance as Coach Bones in Burning Loins Boylesque’s group act, Sweat, proving once again his unique versatility as a performer. 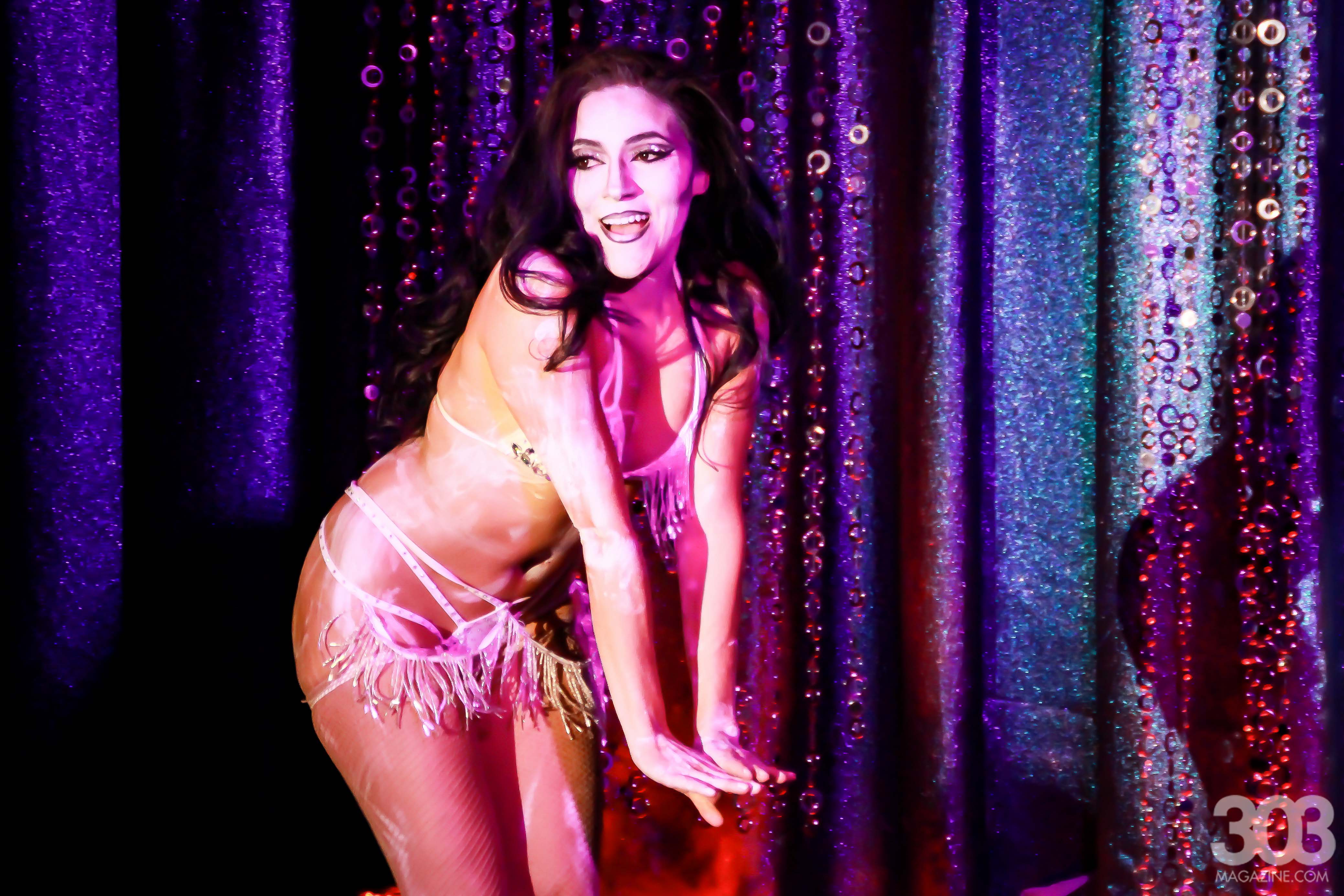 Combining her petite seductive quality with her ability to amuse and entertain, Shotza Ouzo, co-producer of QUEER-Lesque and regular performer at The Clocktower Cabaret, began her solo as a Greek statue clad in grey. After a pause, surf music filled the air and the audience was treated to the statue becoming a wildly spunky burlesque bombshell. 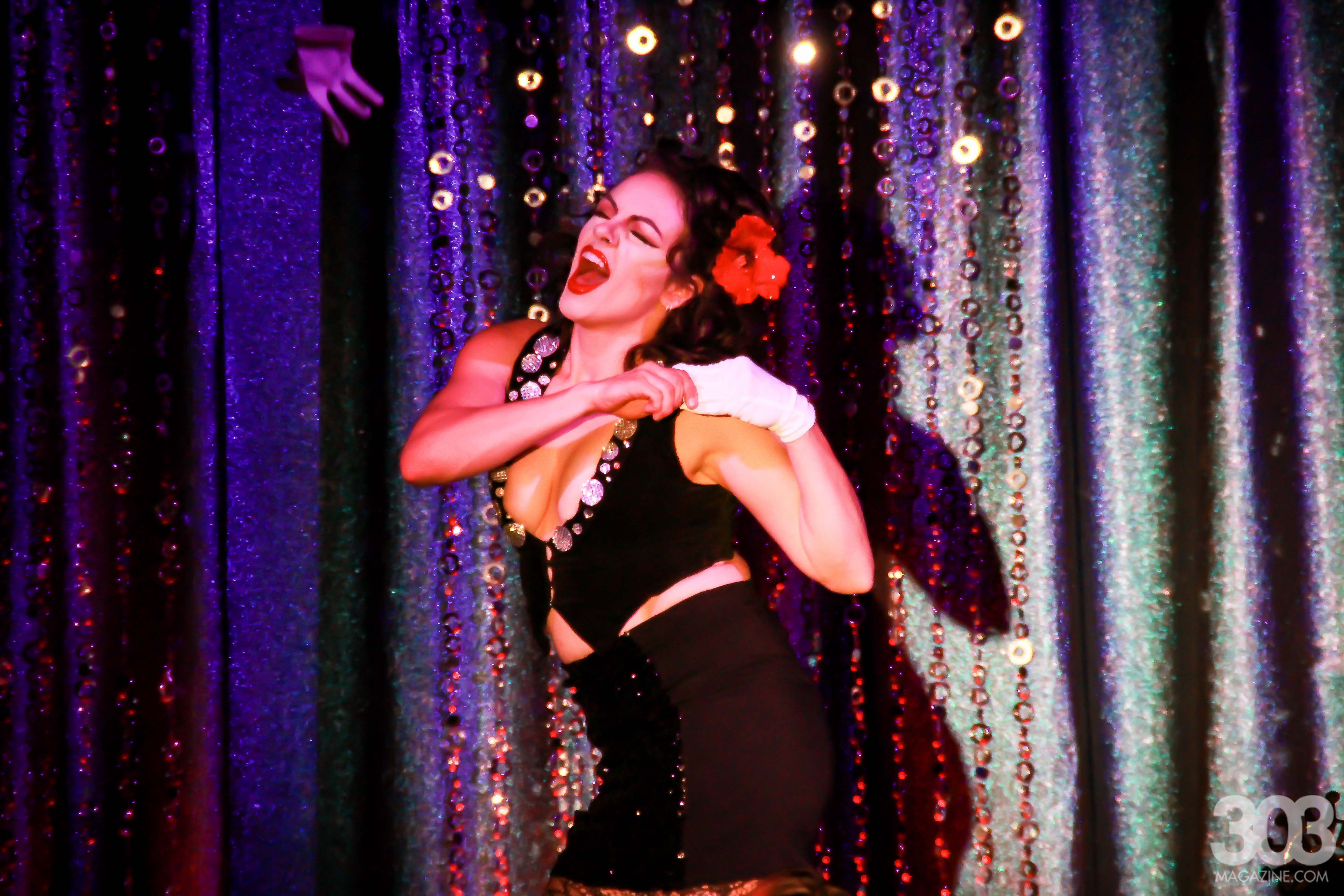 Penny Spectacular’s spirit animal is Lady Ga Ga, which isn’t hard to believe from the moment she takes the stage. Spectacular often performs with Punk Rock Burlesque and can be seen at Charlie’s in Denver as well. Her solo performance was delightful. Her face was incredibly expressive while she artfully stripped, combining comedy and sexuality with a powerhouse performance. 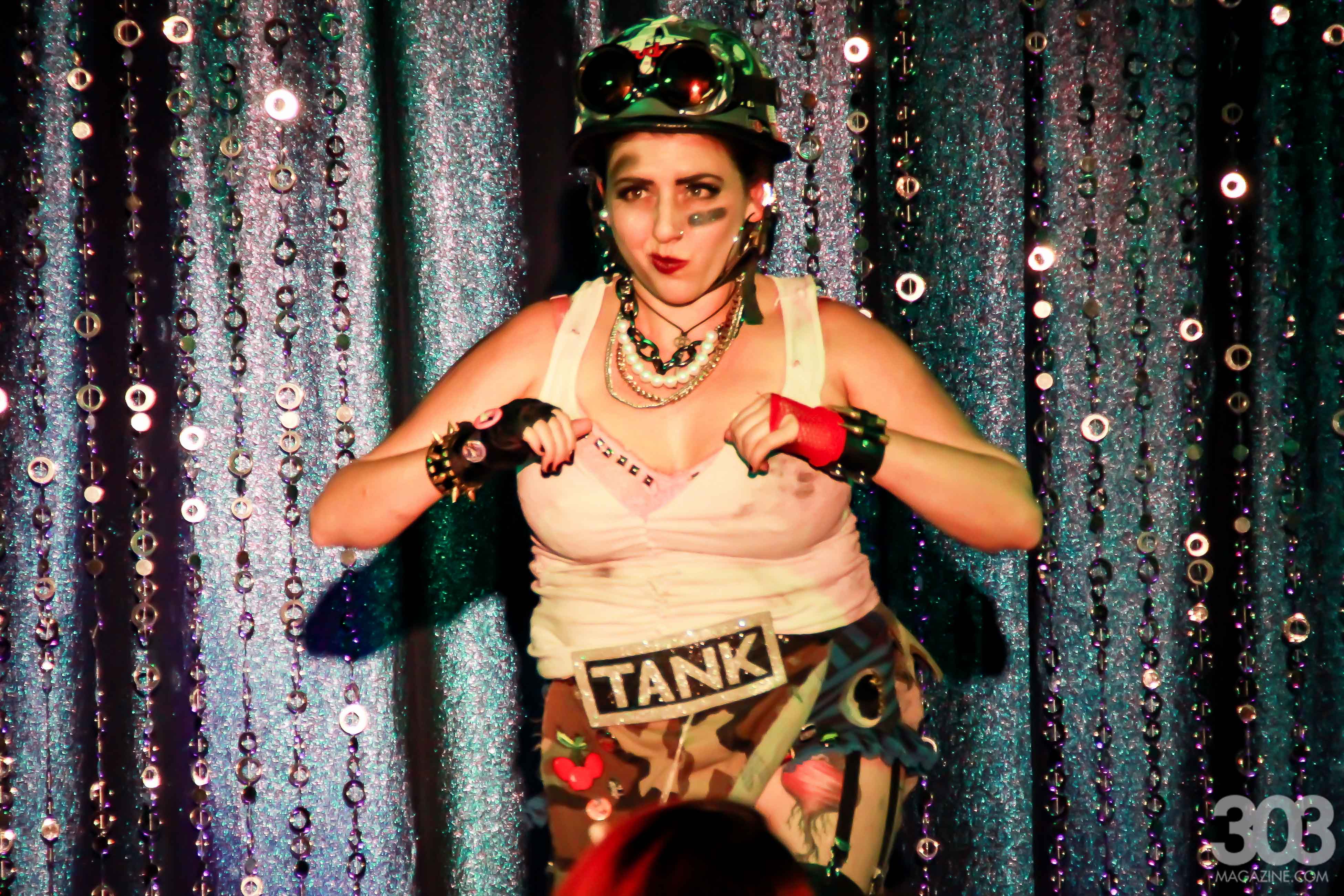 Laika Fox, originally from California, has made Denver her home. Fox is a neo-burlesque artist that has been performing since 2010 all across North America. Fox brought her clever incarnation of Tank Girl to QUEER-Lesque creating a party on stage worthy of the iconic comic book heroine and ending with a final mic-drop moment when she pulled a grenade out of her knickers. Her solo performance was fiercely entertaining. 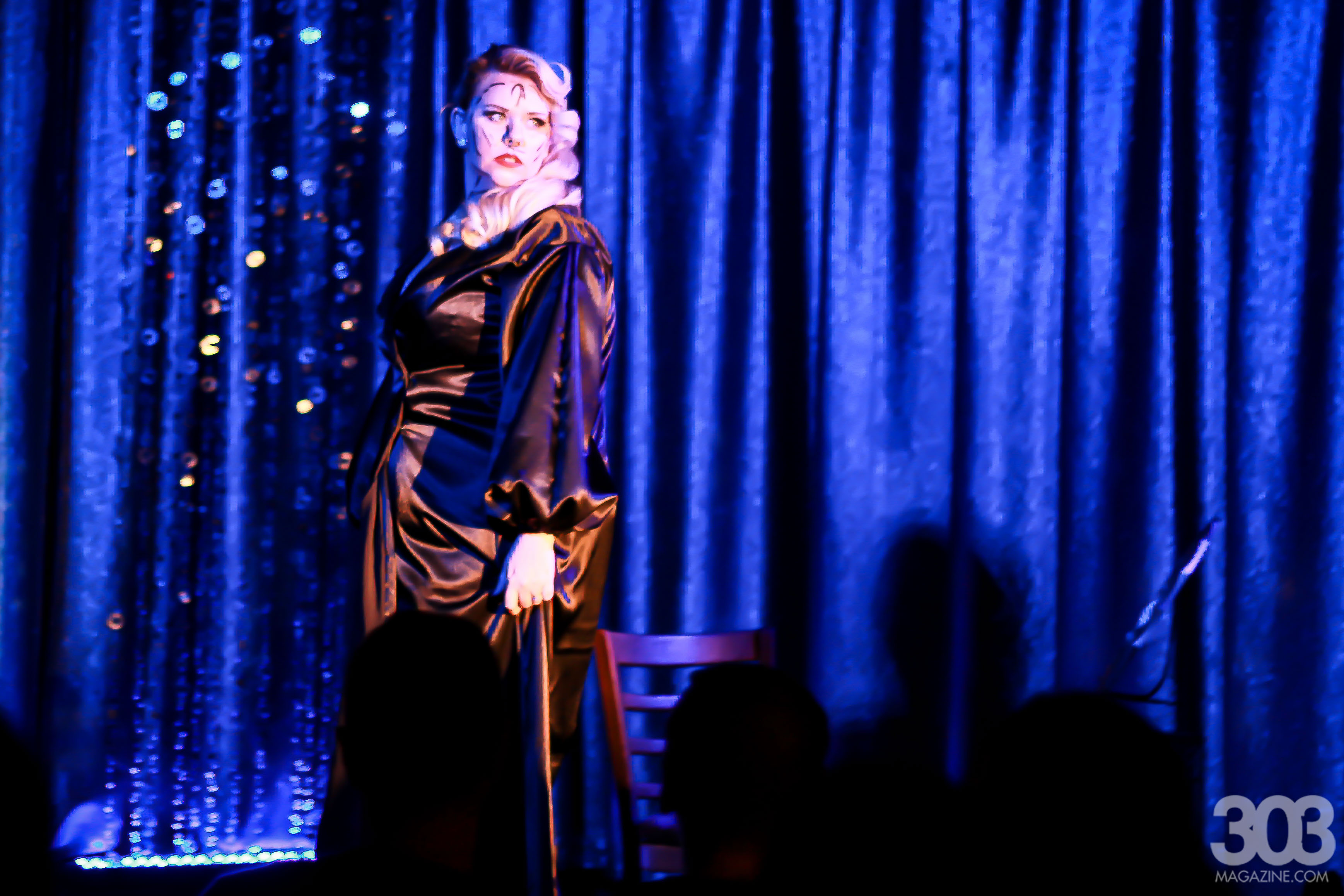 Betsy Bootknocker began her burlesque career performing with Ooh La La Presents in 2012 and performs at a variety of venues around Denver. Many of the performances at QUEER-Lesque were fun, glamorous romps of creative exploration. However, Bootknocker’s act stood out as a singular emotional experience. Her act’s message: self-love and body positivity.

Audiences expect to see the fabulous costumes adorning burlesque performers’ bodies seductively peeled away to reveal often more glamorous lingerie. Bootknocker blew those expectations out of the water as she began her solo performance on a single chair placed next to a large make-up mirror.

Carefully, she began to draw on her face, highlighting like a plastic surgeon would, the perceived imperfections. With each reveal of skin, more marks could be seen. Bootknocker took the audience on an emotional journey of her character’s desire to be beautiful in the eyes of the masses. Eventually, she comes to see herself as truly beautiful, casting off and wiping away the makeup and marks with an intensity that pulls at the spectator’s heartstrings. The raw power of Bootknocker’s act and the intense humility with which she delivered it made her a highlight of the evening in a most gloriously unexpected way. 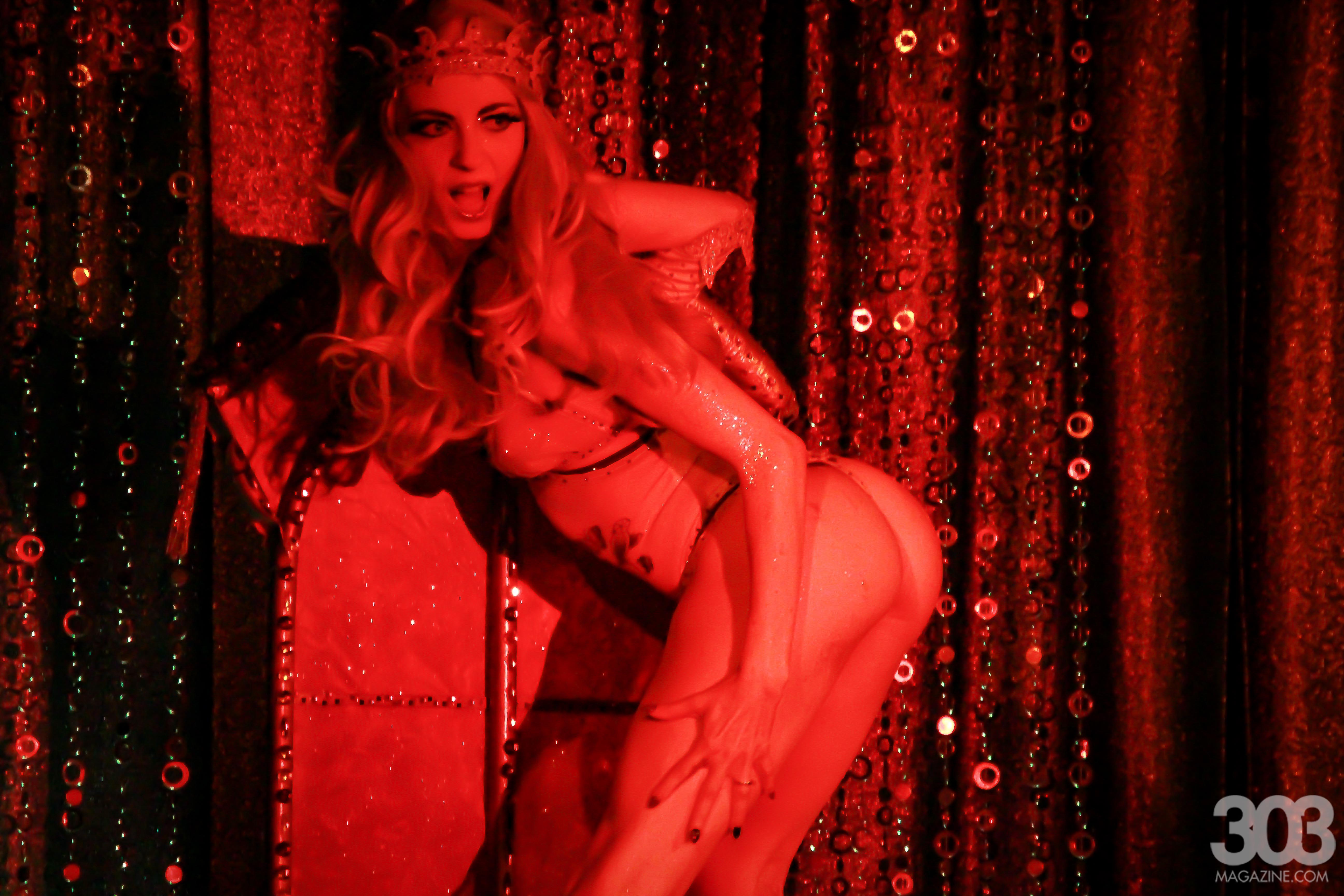 Two performers came out to support the Denver community from out-of-town. Joy Coy, from Albuquerque and Evangeline Cain from Colorado Springs. Coy is a classically-trained dancer who has performed with Albuquerque’s award-winning burlesque troupe, Burlesque Noir. Coy performed two solo acts beautifully choreographed and highlighting her dancer-like grace and precision of movement. 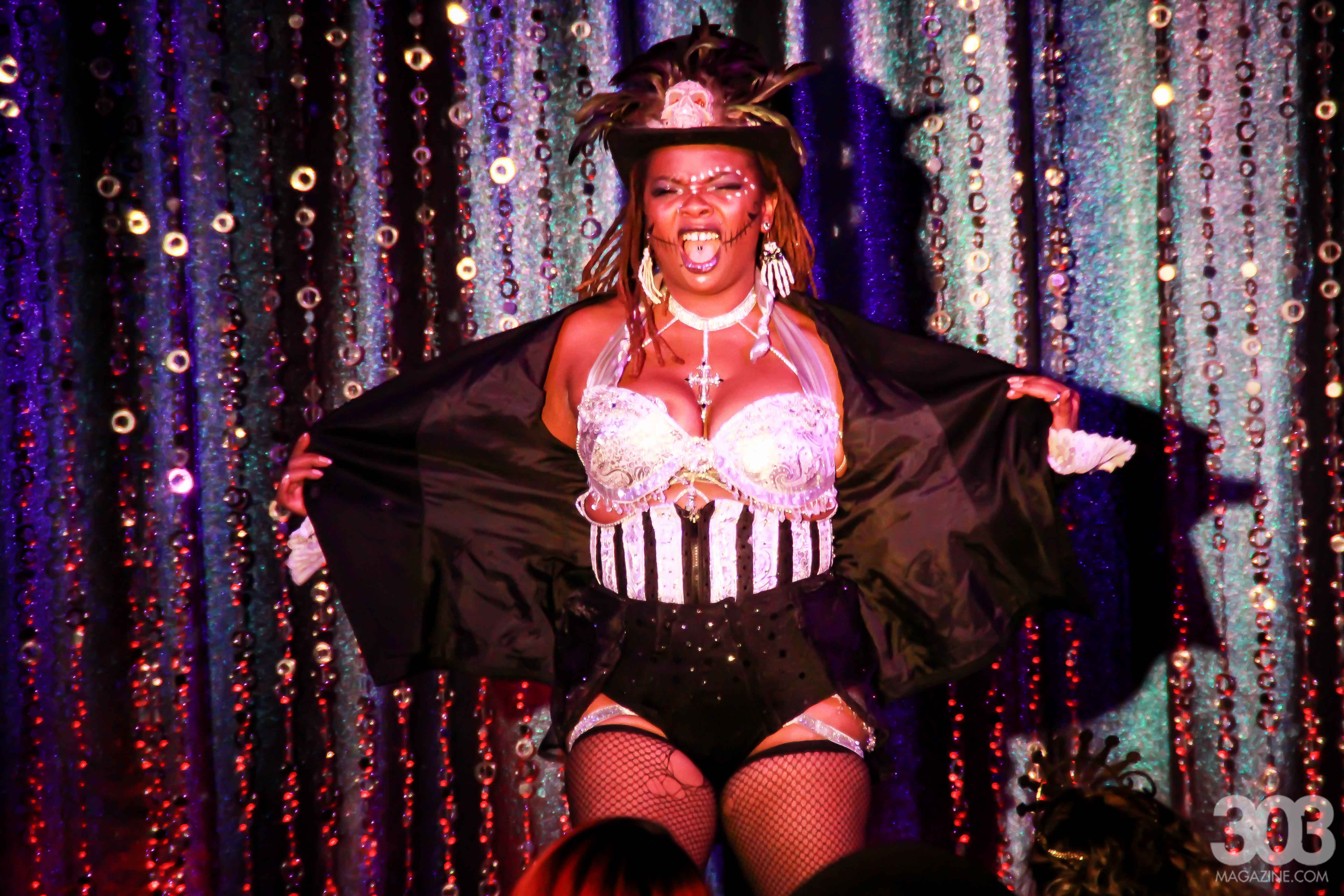 Evangeline Cain is known as the Voodoo Queen of Burlesque and performs as part of Peaks and Pasties in Colorado Springs. She lit up the stage as a rhinestoned Voodoo vixen to Stevie Wonder’s Superstition. 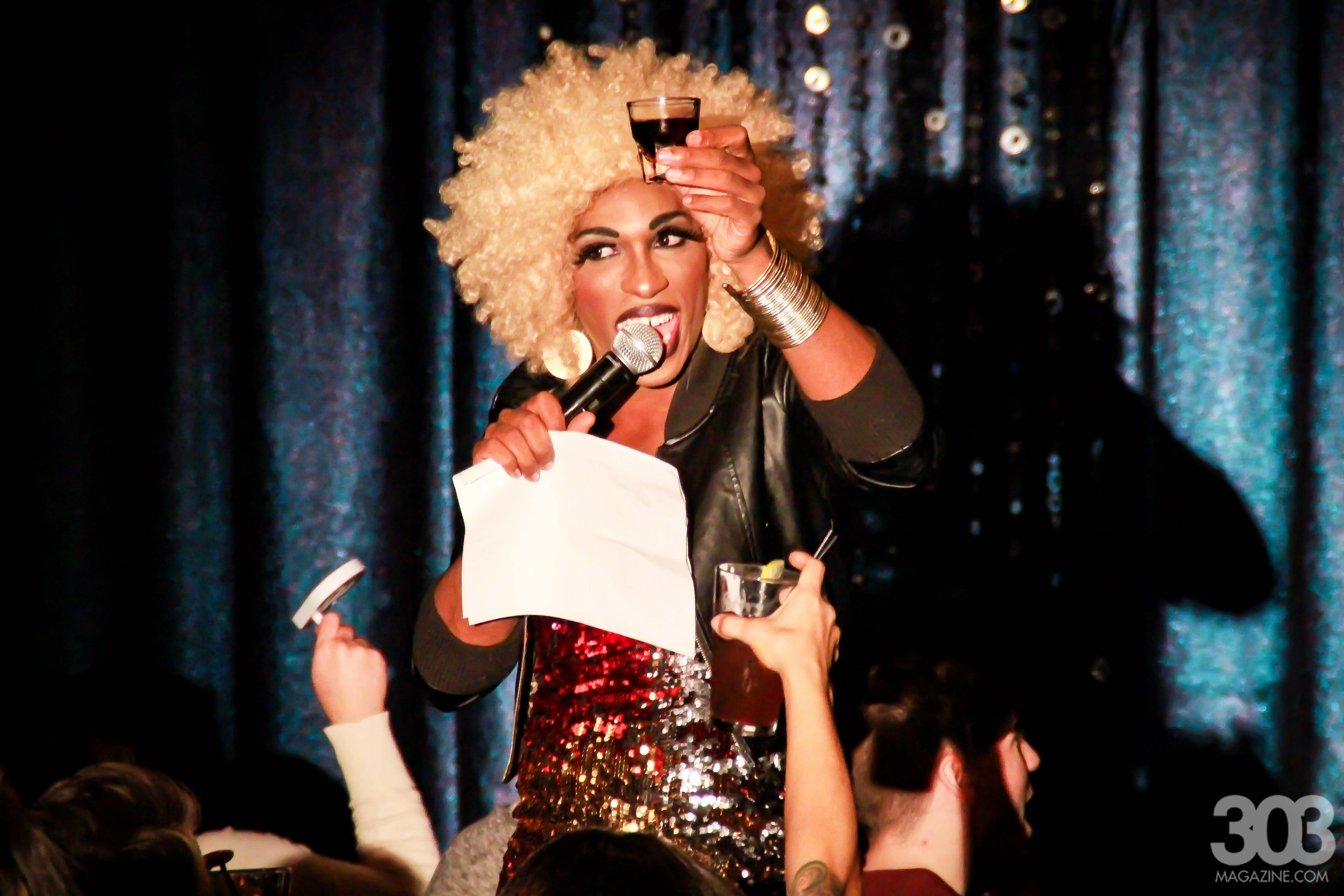 Zarah, the queen of hostesses. All photos by Romeo Fernandez.

The hostess for QUEER-Lesque was the incomparable Zarah. Throughout the show, which took place on her birthday weekend, she was treated like the queen she is and gifted with shots and money gifts from the audience. Zarah brought the audience into the show creating a unique and immersive experience.

QUEER-Lesque offered a night of community dipped in love, diversity, and highly entertaining burlesque acts. The show was a coming together of individuals united in artistic expression that crossed perceived boundaries and took audiences beyond their expectations of what burlesque is and can be.