National Nachos Day (November 6), could there really be a more perfect holiday? Like many of our greatest culinary triumphs nachos were invented by accident. Stumbled upon in 1943 by Ignacio “Nacho” Anaya — making the impromptu nosh out of the only remaining ingredients in the kitchen —  this delightful concept has come to define snacking in the Southwest. Since birth nachos have evolved into a variety of much more complex and often times significantly more rambunctious adaptations. To help you celebrate National Nachos Day in all it’s cheesy glory we’ve compiled a list below with five of Denver’s most delicious, creative and over the top versions. 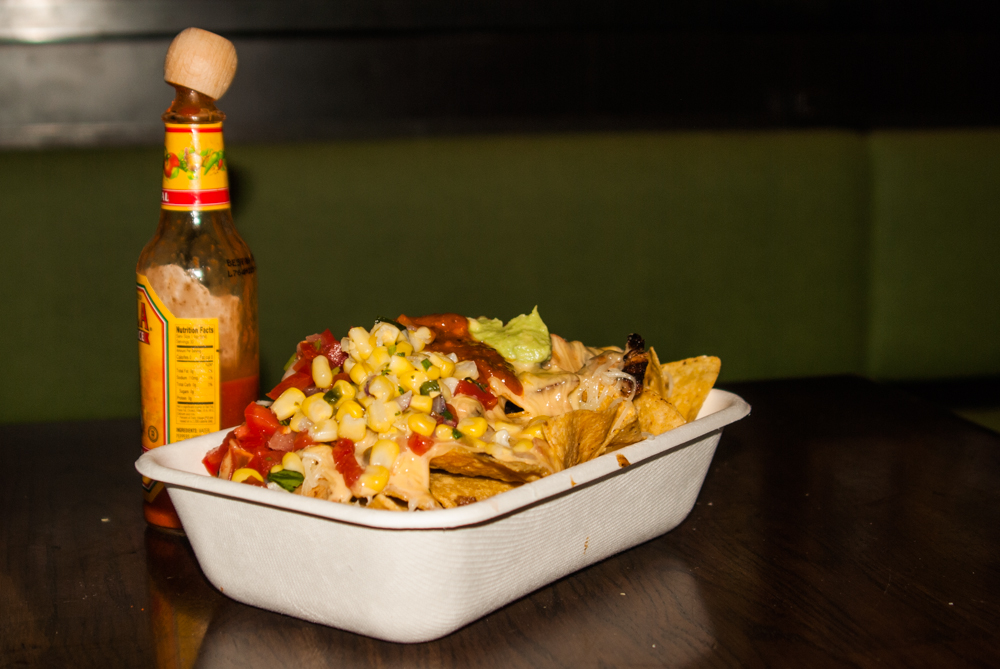 We all know that Illegal Pete’s is a Colorado institution. It is the first place I personally remember enjoying nachos in the Mile High that wasn’t in the comfort of my own home. Ordered from the counter, the Nachos ($7.78-$8.48) can be constructed to meet whatever your particular vision is for that day. Corn chips and a house-made queso blend are the only essential ingredients, from there it’s all up to you. Pork or vegetable green chile, chicken, steak, carnitas, fried fish or vegetables, an array of salsas, shredded cheese, sour cream and more are all on display to ensure that the plate is exactly to your liking. Guacamole is extra, but highly recommended and quite frankly worth the extra expenditure. After twenty-one years in business Pete Turner now has five locations in Denver, including a newly-opened version on Colfax. The atmosphere is casual and highly enjoyable and the food never disappoints. There is also enough variety that you never have to have the same nachos twice. 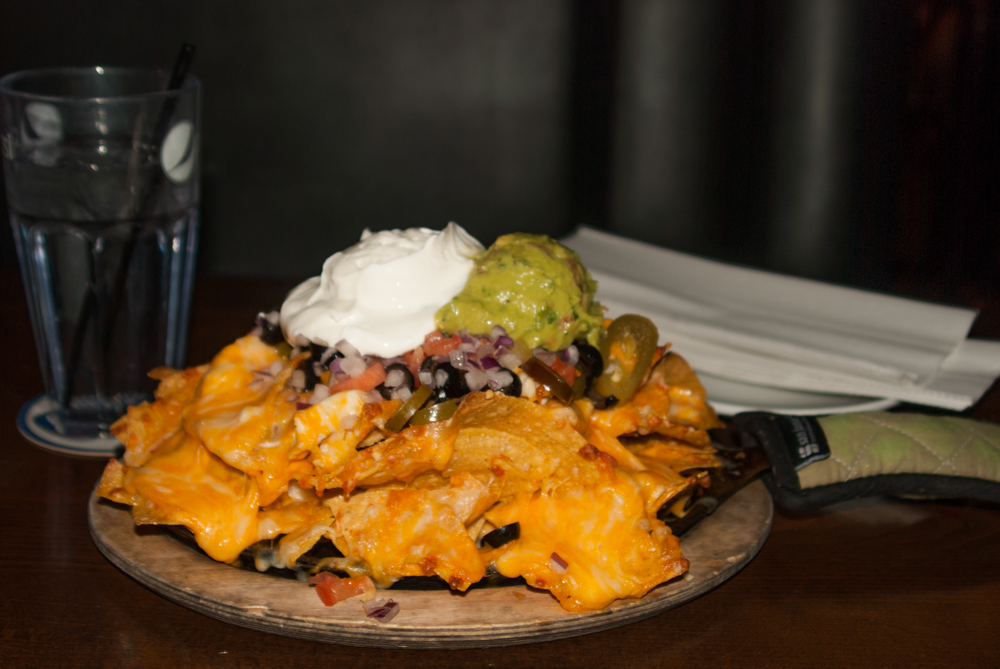 These are the epitome of the new American vision of the classic plate of nachos. The Blake Street Nachos (half $11; full $15) are by far the most sizable of the bunch. A common concern with nachos is the possibility that the cheese will not be evenly distributed through the layers of chips. Daunted by the size of this immense stack, I was immediately concerned that there was no way it could possibly be covering all the extensive chip real estate. To my pleasant surprise they left no chip unturned. Each of the ten-plus floors was thoughtfully done, with a proper crisp-to-cheesy ratio then topped with black olives, chopped red onions, tomatoes, jalapeños, house-made salsa, sour cream and guacamole — even the half order could feed four. These nachos were made for the sports bar — tremendous, inoffensive in terms of spice, and ready to last you an entire night on the town. 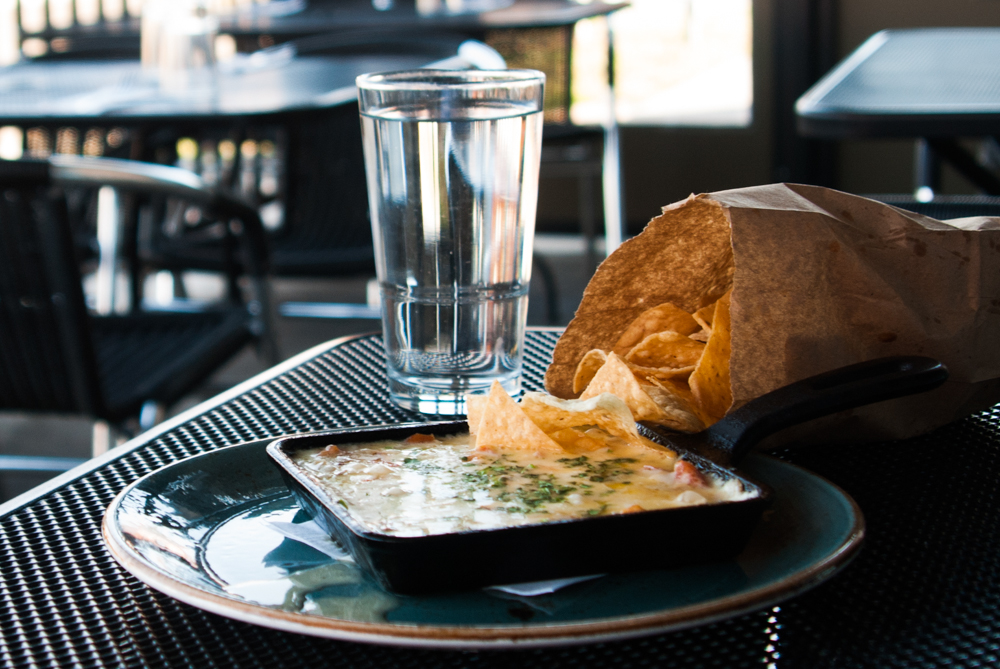 These days nachos are often a heap of varied ingredients, but the only essential elements defining the dish are simple — tortilla chips and cheese. The Queso Fundido al Tequila ($7) is melted monterey jack cheese, tomato, onion and tequila served scalding-hot in a skillet. A bag of freshly made chips follows suit and is tipped over next to the plate causing the topmost chips to fall into the mixture. After the bubbling ceases and the situation appears less volcanic it is time to dig in. Meant to serve two to four people this is the perfect way to ease into the many creative tacos at Kevin Morrison’s excellent food-truck turned brick and mortar concept. Despite the presentation deviating from what has become the commonplace notion for what nachos should be, the queso fundido is still one of Denver’s finest ways to celebrate this noble holiday. 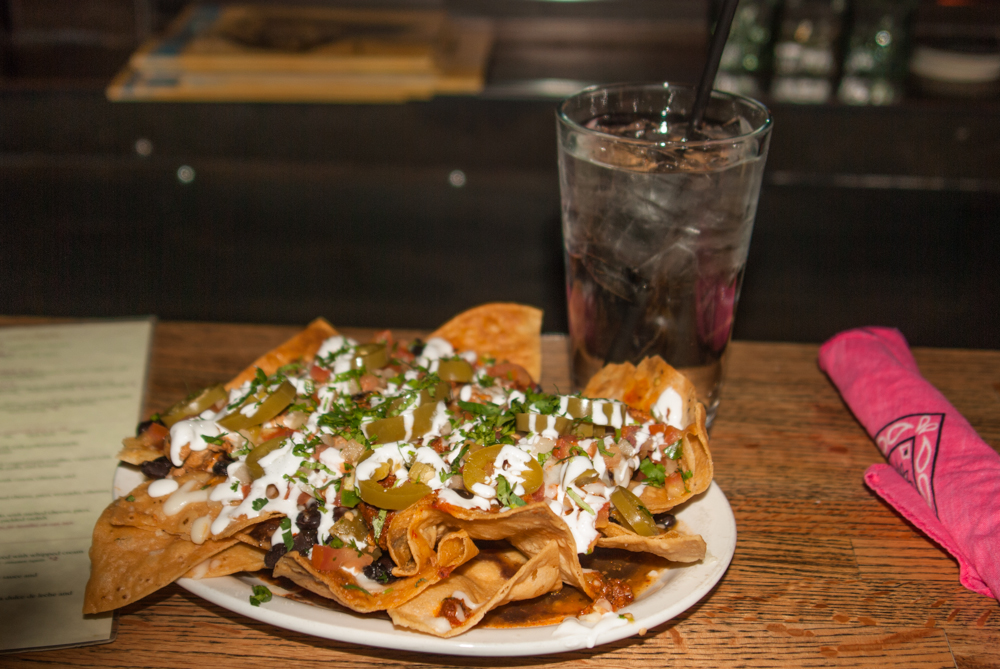 El Camino Community Tavern located just a few blocks up the street from Taco Tequila Whiskey’s Highland location is a delightful Mexican taqueria serving up well-made classics. The Green Chili Nachos (half $7; size $11) are house made chips, spicy green chili, black beens, melted cheddar mix, crema, pickled jalapeños, pico and cilantro. Top it all off with a choice of carnitas, chicken, chorizo or tofu ($2) or steak or shrimp ($4) then continue to dive in. The real star of the show here is the green chili which packs enough punch for your average Colorado spice enthusiast without being so hot as to deter the less heat-inclined. A half order is already massive — the best part being it will only run you five dollars during happy hour everyday from 3 to 6:30 p.m., and then again from 10 p.m. to close. 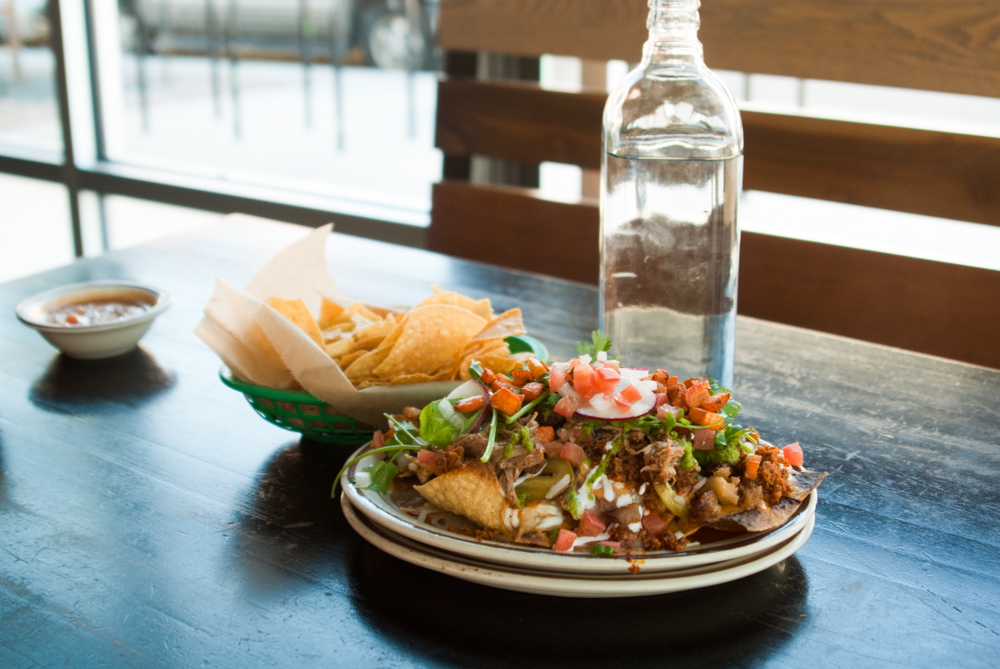 The version at Troy Guard’s Mexican eatery are literally diabolical. Not only the most decadent nachos I’ve ever consumed, this is without a doubt one of the most depraved and incredible meals I’ve ever had — ever. The Tres Pigs Nachos ($12) is house made chorizo, pork belly, braised pulled pork, pinto bean dip, roasted cauliflower, radish, pico de gallo, crema, pickled jalapeños, and salsa verde and tortilla chips smothered in a hedonistic blend of Oaxaca, monterey jack, manchego and white cheddar. The nail in the coffin is the generous helping of perfectly crisped chicharrónes that top the heaping plate and technically brings the nachos up to a pig four-ways. This meal is not for the faint of heart and I left feeling at once deeply satisfied, but mostly in need of attending confession.

All photography by Colin Wren.