Briar Common Brewery and Eatery Tangles with the Norm

Last week, my refrigerator, bedazzled in brewery stickers, welcomed a new insignia—the vine tangled crest of Briar Common. Perhaps this pastoral symbol hearkens back to the owner, Kent Dawson, and brewmaster brother, Greg’s roots in the dense forests of Oregon. Maybe the patch of snarling briars indicates the challenge and risk that the Dawsons have incurred launching both brewery and eatery under the same roof. Needless to say, a whole lot of thought was poured into their hybrid space which began operations little over a month ago. 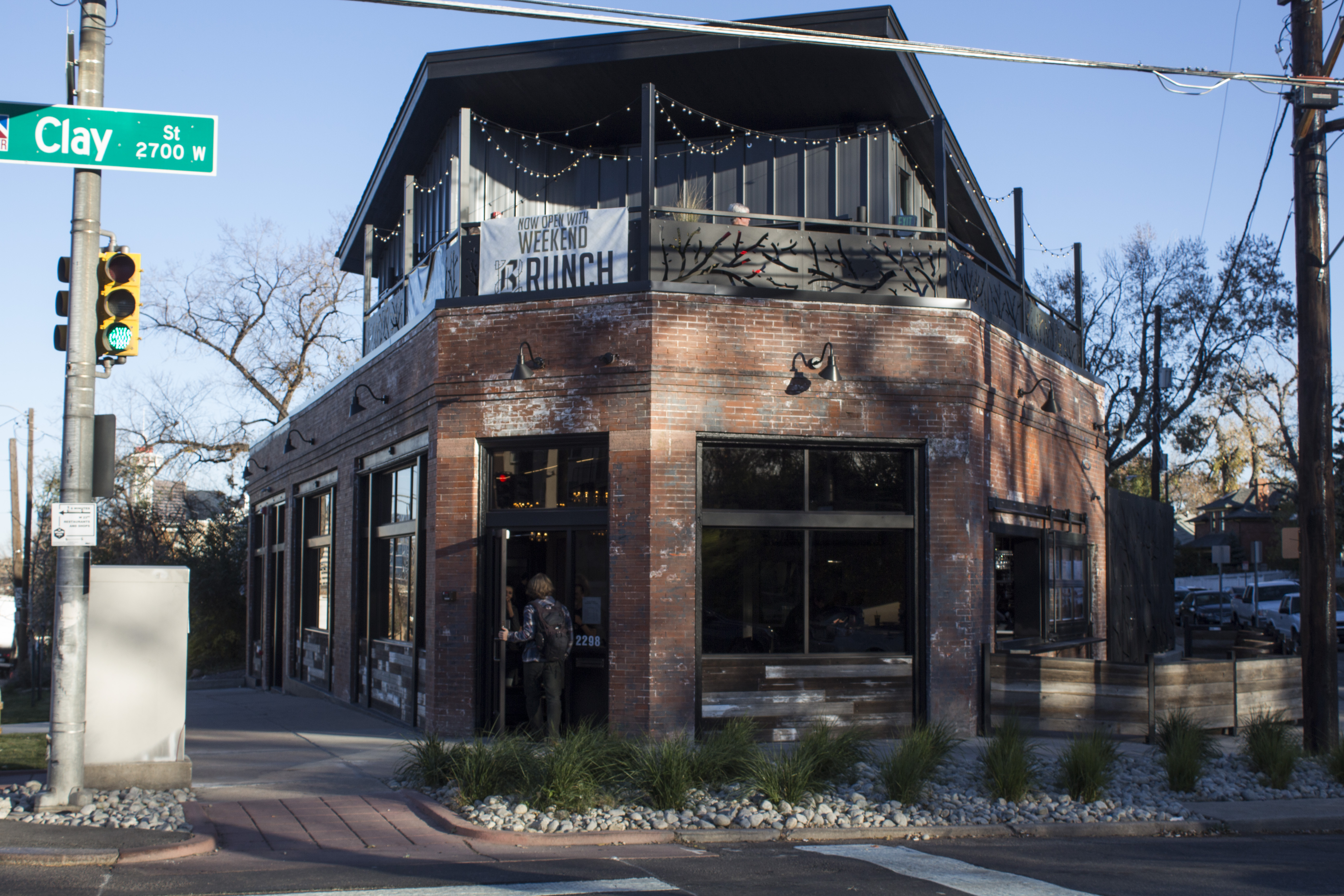 Kent pounced on the antique storefront in Jefferson Park in 2011 with the help of third brother, Travis forging the inception of a project that the trifecta of siblings had been dreaming about since they were old enough to drink — given Greg’s homebrewing background possibly a little earlier.

“We first started going to McMenamins down the street in Portland when we were younger and their brewpub idea seemed like an interesting business model,” remarked Greg about preliminary inspirations and experiences. 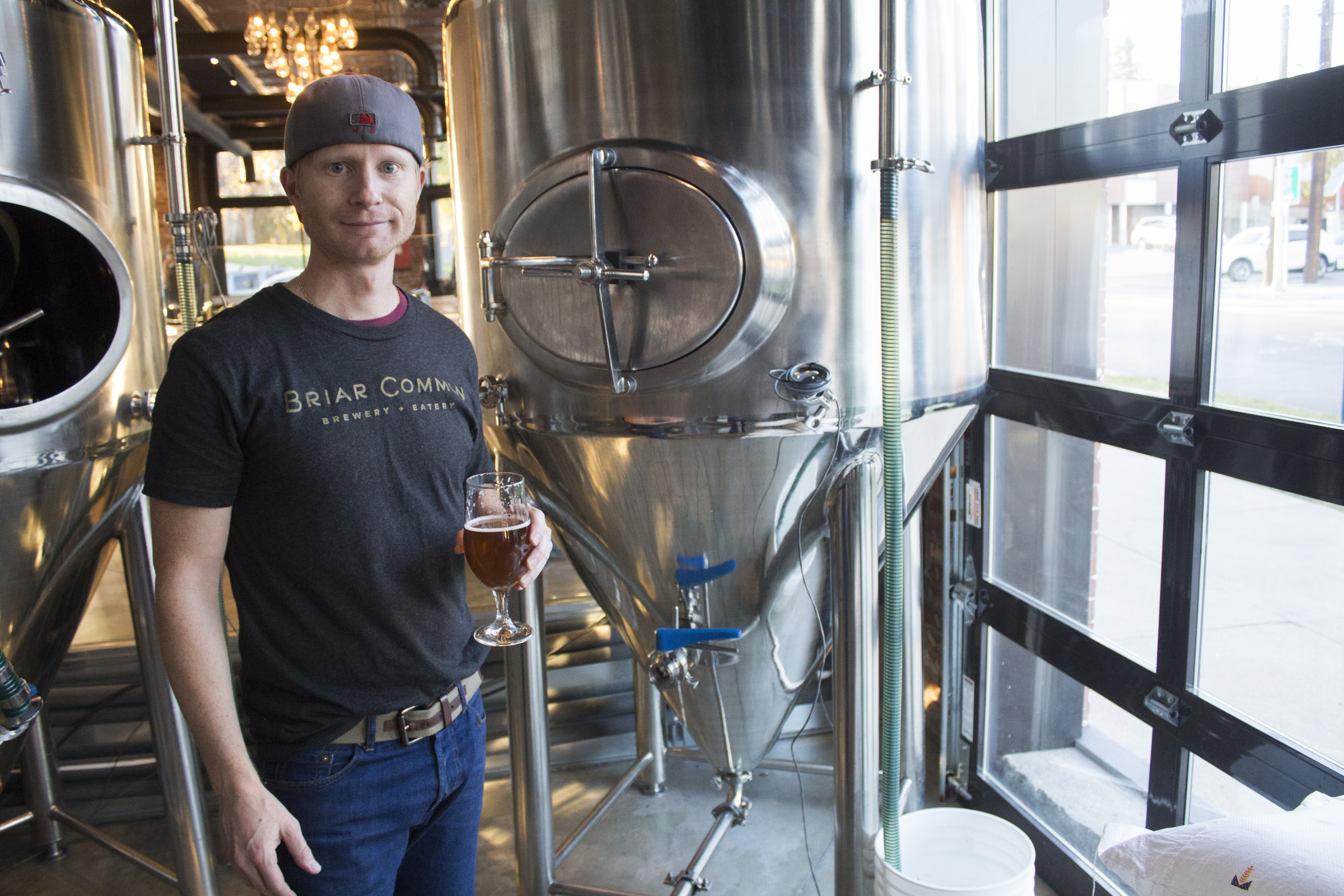 Afterwards he got more resourceful and dedicated 10 years to crafting the Northwestern IPA, a Briar staple, and other beers, later exploring the potential in Belgian Trappist beer. He discovered the complexities and literally divine flavor perfected by Trappist monks who enjoyed the dubbels and tripels alongside a meal or simply as the meal itself.

Greg steered his Dubbel called Lanham away from heavier iterations brewed in the monastery seeing that it is best paired with Harissa smoked ribs ($15)—from personal experience, the two are absolutely inseparable. While the Lanham Dubbel is a dark beer by nature, it remains at a medium body making the rib combination quite perfect to session. The soy glaze and furikake contain mild spice with warm caramelized notes which praise and elevate the perceived sweetness of the Dubbel, also engaging nicely with the tobacco and cocoa notes of the Rochus American Porter. The Dubbel is yeast forward which materializes on the tongue and aids the unique zing from the watermelon radish folded in between the ribs. The half rack itself packs a punch with juicy cuts of full meat. It’s best to pick the bones up and gnaw, just remember to ask for a clean smudge-less glass after you’ve terminated the pairing. 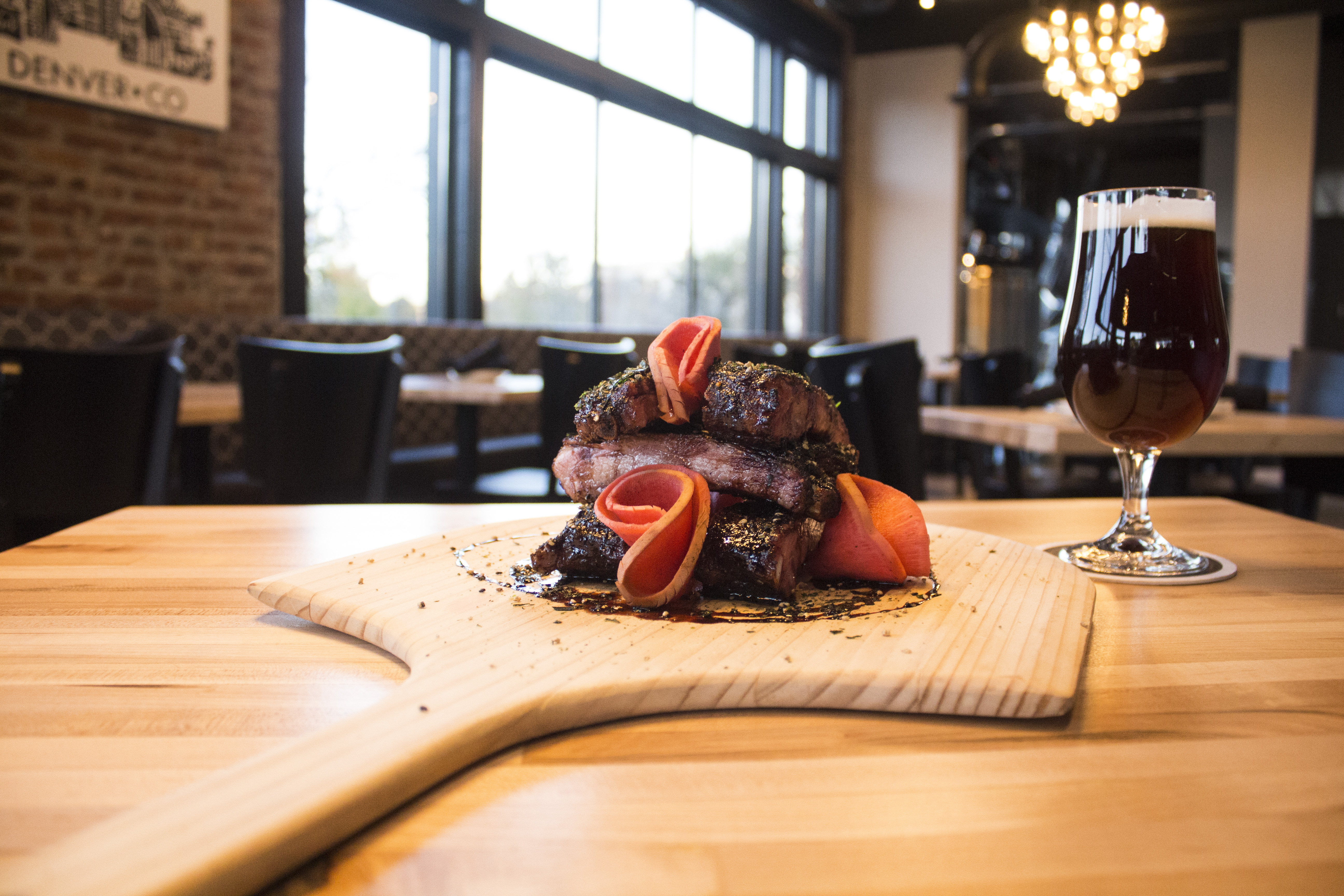 “How could we throw frozen fries and a burger on a plate?” inquires Kent admiring the evening’s special shared plate—a potpourri of salmon, trout and tuna spreads with biscuit crackers and a green mustard sauce at the bar.

The Joyce Saison performed well with this array of hors d’oeuvres. The white pepper and unripened banana aromas capitalized on the texture of the fish spread. The bread and floral flavor weaved with the biscuit crackers and the yeast head catalyzed the sharp spice of the mustard. 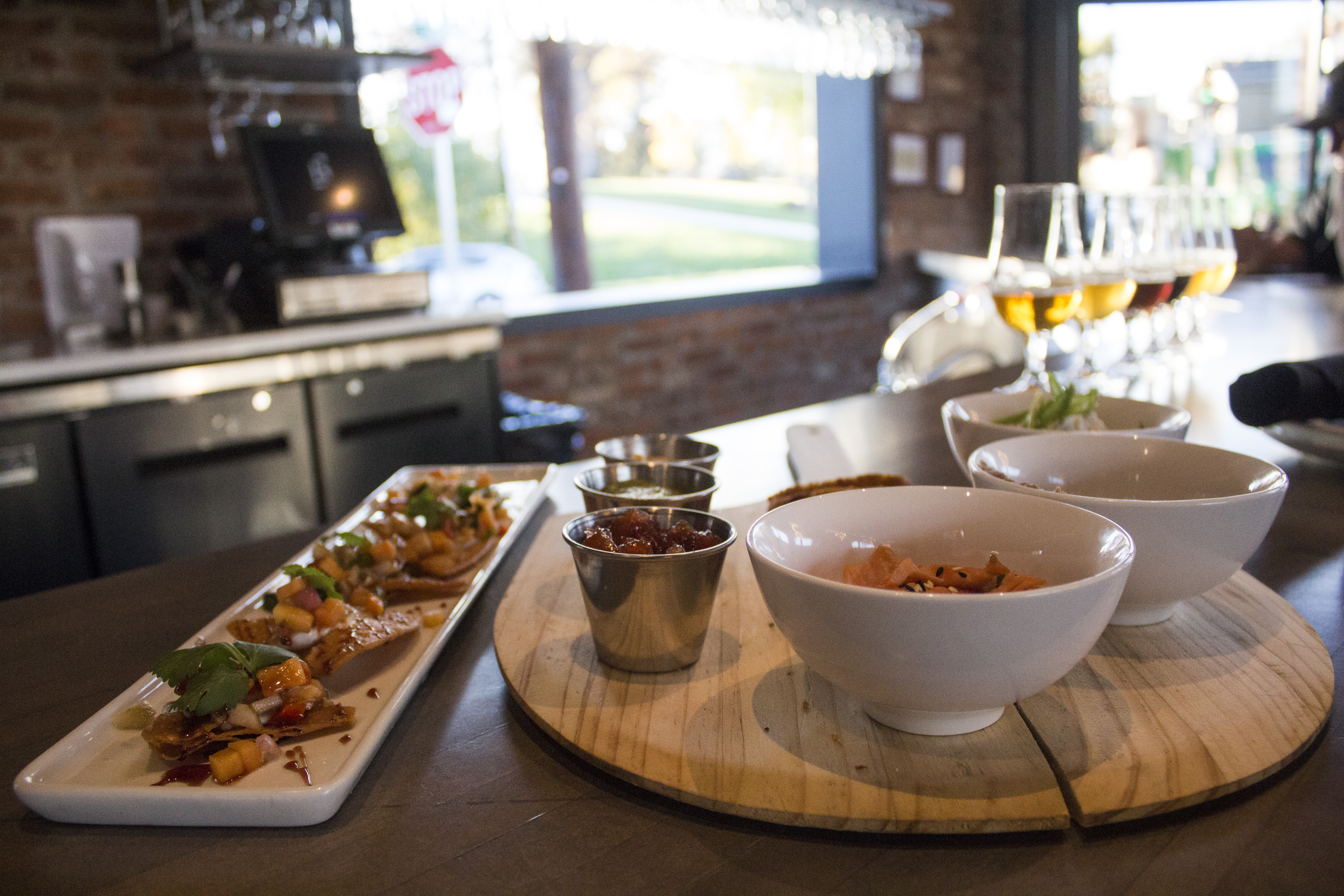 Kent interviewed innumerable culinary visionaries before landing on Joshua Goodsell who began his career sharing a kitchen with Iron Chef Jose Garces honing a natural instinct for marrying grub and brew. Frankly the combine sounded quite enduring as Kent explained, “We asked the chefs to draft up an extensive pairing menu and then judged each one.” Chef Goodsell must have knocked it out of Jefferson Park because you’d never dream that the plates from Briar Common come through a brewery on the way to your table in the taproom.

The Dawsons are very unassuming about their ingenious craft. Kent comments, “We’re a brewery trying to put good food on the table,” as Goodsell’s ceviche tostadas ($6) featuring pico, hibiscus glaze and lime creme fraiche arrive flanking the Hobart, a Belgian IPA. This pairing involved the intriguing and unconventional union of malt and hops interacting with the sweet drizzle of hibiscus sauce and the tang of the raw octopus with pico de gallo. The crunch of the tostada augmented the bitter bite of the IPA that lingered after sipping on the tongue. The Belgian part of the beer simulated a tripel with a large presence of malt bouquet on the nose melding to the bright lime creme. 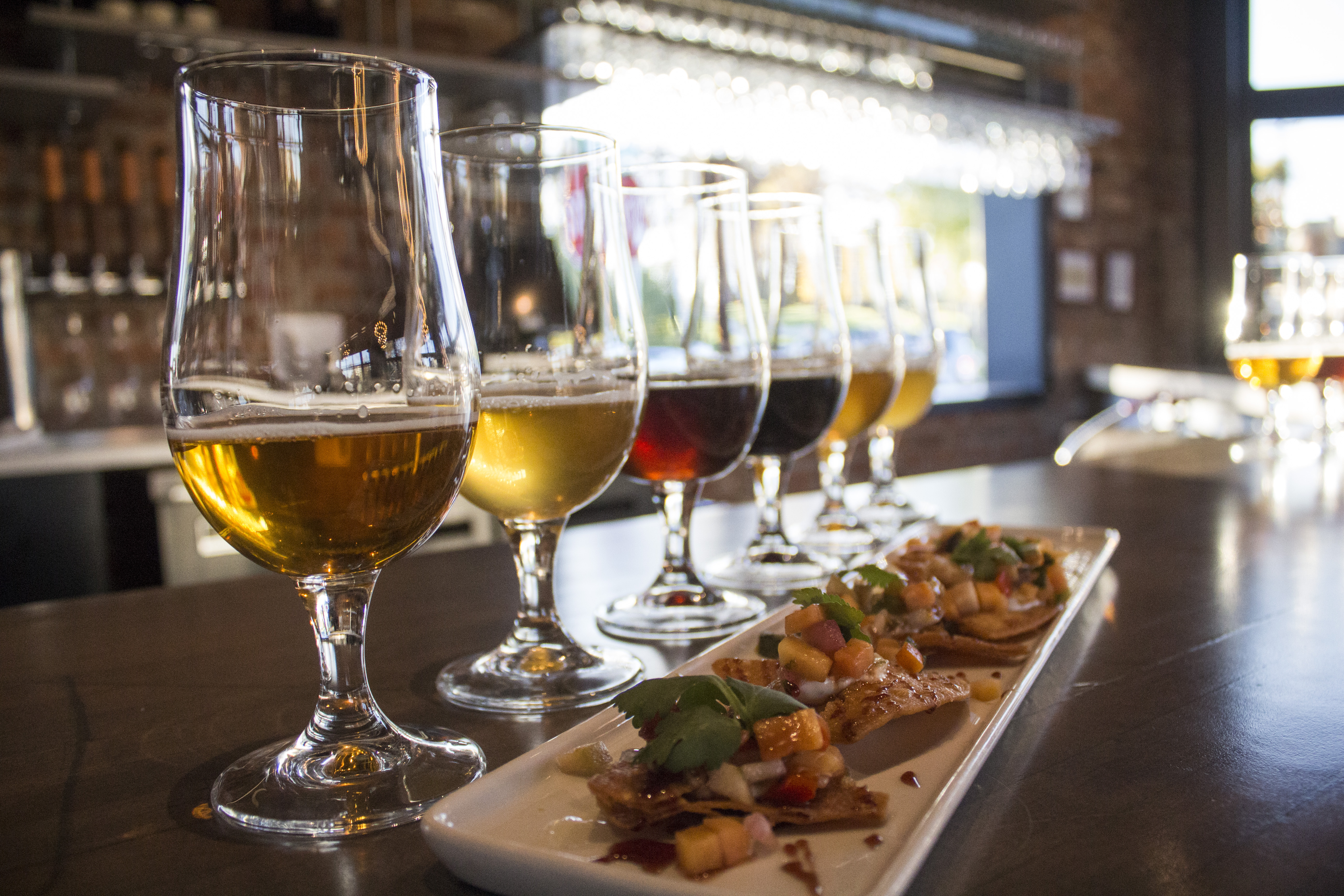 Ceviche tostadas bridging the full line up of Briar brews

The pairing system is a phenomenon reserved for the wine industry for centuries while beer on the other hand has been relatively sidelined to the ranks of food trucks and pub chum. While Briar Common crafts a pork belly platter ($16) which brines for a day, braises for six hours and then lays flattened under a 100 lb anvil, the mains and shared plates don’t strive to sack your bank account after an evening.

There is a rotating cut of steak (mp), white beans, greens puree, ginger pickled radish and crispy potato skins at a brewery in Denver now. Establish liaison with the Northwest IPA to pull the savory and succulence from the steak. The porter is very drinkable at only 6% abv. Kent adds that “these aren’t beers you have to chew,” hoping that folks will try two or three pairings during the course of an evening. This is the kind of creativity demanded by the inflating craft beer industry which comes with its fair share of hot air. As flavored ales wax absurd, Greg begs the question “what is the gold standard for a cinnamon cilantro pale ale,” which was my rhetorical brew imagined for the sake of discussion. Being a certified beer judge, Greg knows the fluctuation of the microbrew scene and he sticks to his guns—Saison, Dubbel and an Imperial Red for a winter warmer—brews that make sense. 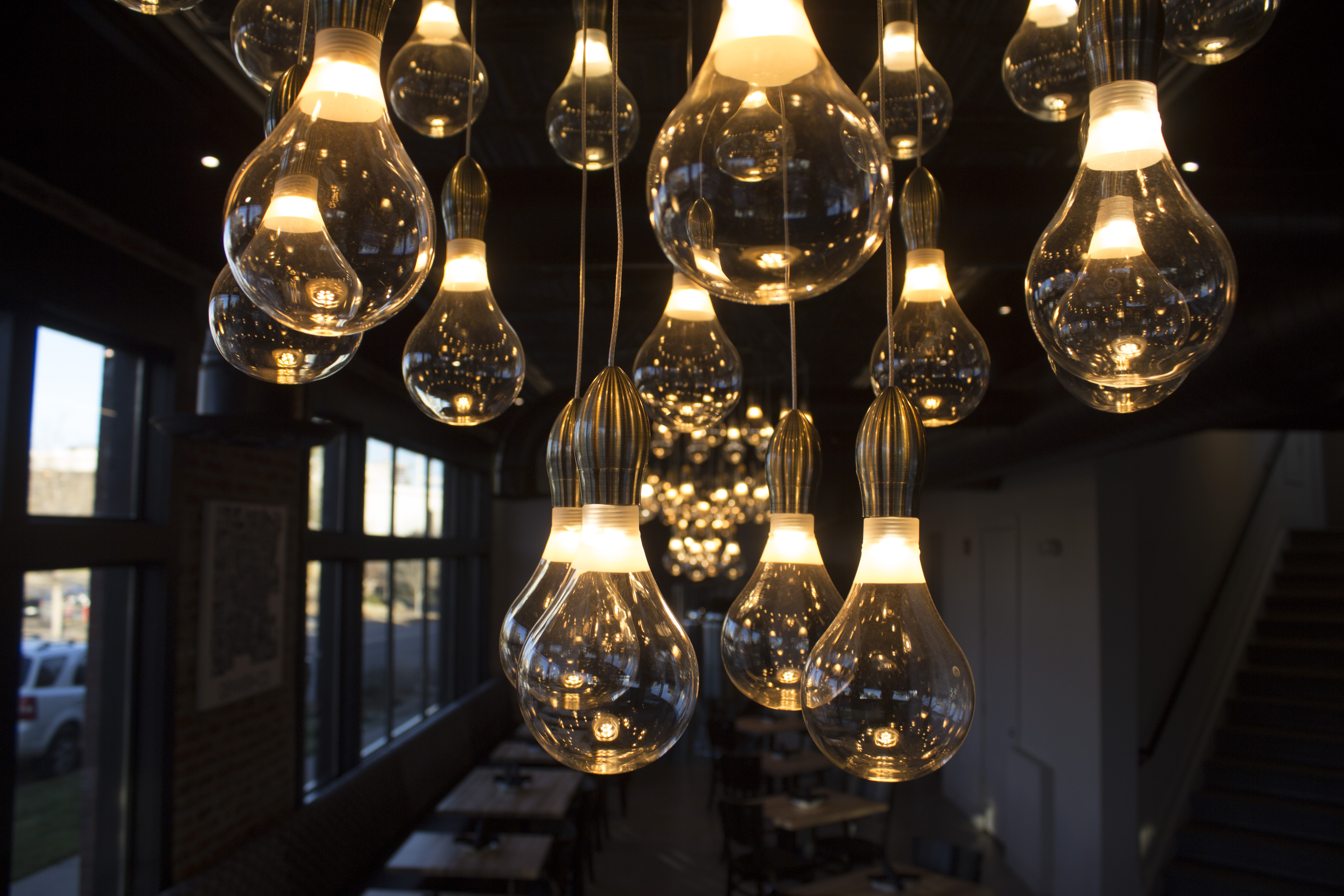 On second thought, my conviction is that the Briar Common emblem translates to the entanglement of ideas—eatery and brewery, Kent and Greg, malt and hops—ultimately these briars bring people together to collaborate, pair and move against the grain. Briar Common is currently the only singular team at the Chef and Brew coming up November 17 showcasing their food and beer as one unit. For instance, other teams look like Chef Seth Murty’s The Good’s Restaurant hitched with Fiction Brewing Company or Chef David Lillich’s Pub 17 interacting with River North Brewing and then at the bottom of the list lies Chef Joshua Goodsell Briar Common doing what he does best with Briar Common Brewery. You can expect brave exhibitions like this to continue for the Dawsons as they push the envelope of imagination in both the culinary and craft beer industry.

All photography by Kenny Coles