The beauty of living in Colorado is the ability to experience nature along with music. Fort Collins local Eric T. Smith married the two together in his recording series Little House of Sound. Using a solar powered audio recording system inside a VW Camper, Smith travels throughout the state with various musicians to create music that is truly the epitome of Colorado sound.

Here at 303, we got to chat with Smith about his inspirations for this project, stories from along the way and what’s next for Little House of Sound. Make sure to check out his website here to stay updated with local music and beautiful journeys.

303 Magazine: What inspired you to create “Little House of Sound”?

Eric Smith: The general idea behind Little House of Sound was conceived in the Summer of 2015. My wife, Genevieve, and I toyed around with the idea all summer long until we decided it was time to just go for it. The idea of people sharing and enjoying heartfelt one-time performances by sincere musicians was the direct inspiration.

Even after obtaining a degree in audio engineering, I had very little interest in working in a traditional recording setting. I have always preferred doing things my own way, and this project has been done completely grassroots, guerrilla style.

303: Where’s the craziest place music has taken you?

ES: This is not as crazy a location as it is a situation, but for my session with Josh Seymour we woke up at 3:30 a.m. on a very cold morning in early February, and drove up the foothills outside Fort Collins to a location I had in mind. I set up in the dark while Josh warmed up both his voice and his hands. At first light, we started recording, and it was one of the most beautiful sunrises I had seen in a while. 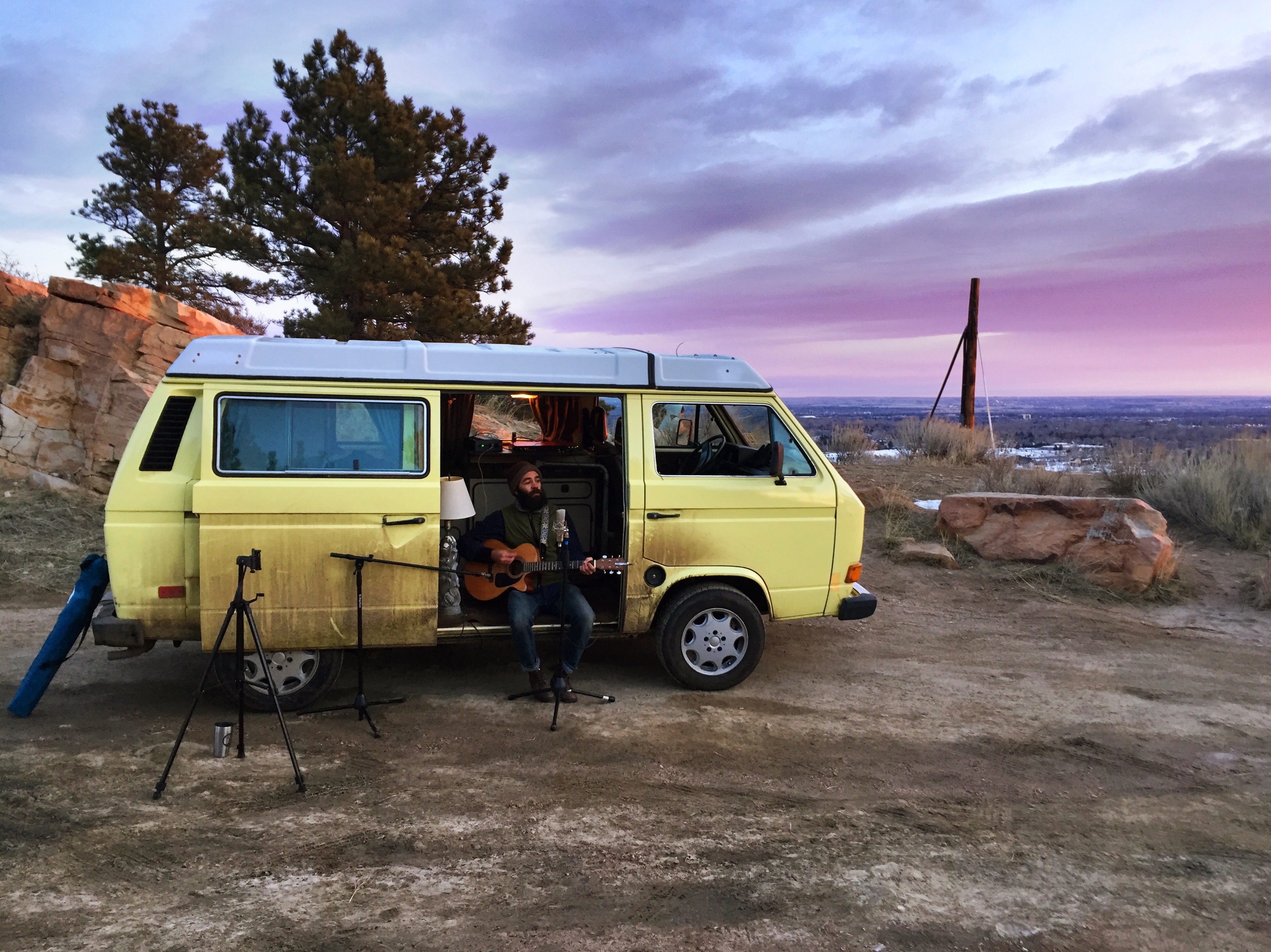 303: What’s a good memory from one of the recording sessions?

ES: The session with Brent Cowles really sums up the whole of Little House of Sound. We were going out to record at a friend’s property; they have 35 acres out towards the Poudre Canyon. We had a caravan of three cars and got to the property, and the road was pretty muddy, but the van made it through. Then came the hill.

I remember five people and a dog in the van, with the pedal to the metal in first gear, inching up this hill, hoping to make it, all the while listening to The Band’s Greatest Hits on cassette tape. We made it; then it started to rain. The weather is always one major obstacle with recording outside. I set up what I could, and we had to delay a few minutes. The clouds parted, the rain ceased and we were able to nail the session. This is a great memory for me because somehow, no matter how much you worry about the uncontrollable things, in the end, patience is key and everything truly ends up working out fine.

I didn’t realize what a community affair this would become. It creates a more authentic live performance from the artist and allows people to get a closer look at the inner workings of the project. 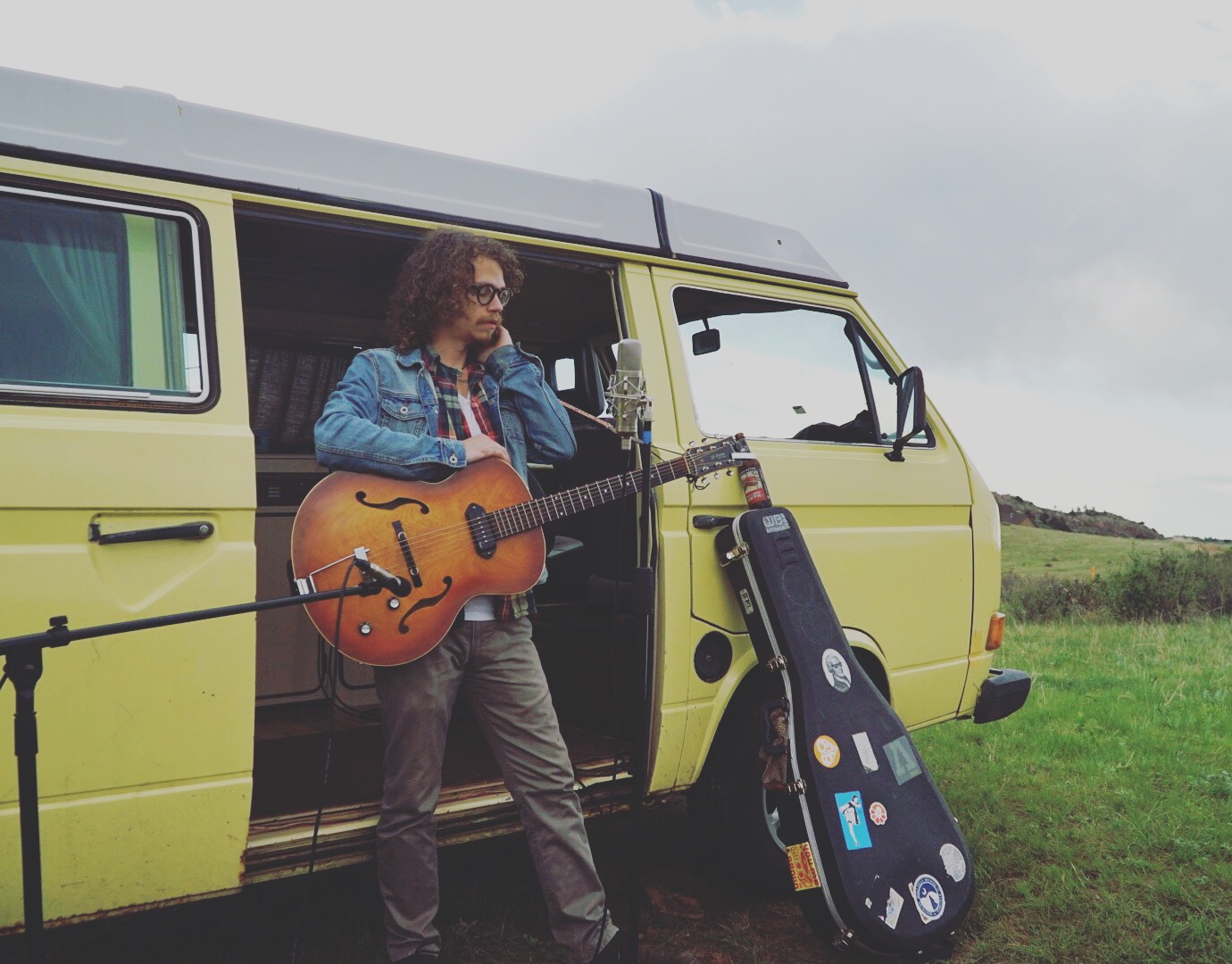 303: Have you run into any trouble working with solar power?

ES: I have surely run into my fair share of hiccups with solar power, mostly because it’s something I have no history with. In fact, that goes for most aspects of this project (laughs). The biggest obstacle was having too small a battery at first. I had the battery die midway through two different sessions, which is not only disappointing for me, but for the artist as well. I now have a larger battery bank and use the older, smaller one as an auxiliary option in case the large one isn’t charged enough.

303: What’s in store for the future of Little House of Sound?

ES: I am in the process of working out a way to upgrade some of the gear that is used. Since this project has all been from scratch, I had to scrape together whatever I had. That means borrowing microphones, and using my iPhone for video. While this gets the job done, its not an ideal set-up. I am looking into different camera set-ups, microphones and even slightly changing the format to include a little more behind-the-scenes with the artists.

I plan to travel outside Colorado with Little House. I have received a few inquiries from artists outside Colorado, and the idea excites me. I’m hoping to spend a month in Detroit area next spring, which is where I grew up. One artist in particular I really want to record in Detroit is ‘Greater Alexander.’ I guess that’s part of the appeal to having the camper van.

303: What is it about Colorado that makes it a great platform for your series?

ES: Colorado is completely flooded with natural beauty. The Front Range in general has vast open space, and it’s all so accessible. With Colorado distinctively having four seasons, I can use a similar locations multiple times and they will have different visual appeal each time. Another aspect is the people who live in Colorado love to be in nature. Most artists have no problem agreeing to drive up a mountain with me and play some songs in the fresh air.

303: Who is a musician you would like to work with next?

ES: One in particular is Eric Bjella, of Fort Collins. I have seen Eric perform in a large room of people, casually chattering. When he took the stage, he announced he would perform his new album (yet to be released) from start to finish, without stopping. When he began, all eyes were on him, without even the hint of a whisper in the room. Following his performance was the most thunderous, heartfelt applause you could imagine. It was really powerful to see a local musician most people have never heard receive that kind of respect from his audience. I am planning a session with Eric this fall.

303: What positive side effects have come from this project that you did not originally foresee happening?

ES: I didn’t anticipate what a community affair this would become. I decided along the way to reach out to small farms in town; they are the perfect outlet for this type of event. Once I hosted my first session at Raisin’ Roots Farm, I began inviting people to watch. It creates a more authentic live performance from the artist and allows people to get a closer look at the inner workings of the project. Not only that, but it also creates a mutually beneficial situation for everyone. It directly benefits our community of art, music and food.

Interview has been condensed. Check out the Little House of Sound here.