2016 will be remembered as a turning point for Nashville’s on-the-rise dance-funk duo Cherub. From a new album that provides a more mature sound to a headlining Red Rocks show that the two took very seriously, it’s clear that Cherub have their sights set on bigger things. 303 Magazine sat down with the duo backstage at Red Rocks to talk about new album Bleed Gold, Piss Excellence as well as their future plans for Denver and their music. The two had just finished sound check and it was only hours before their epic headlining show on the Rocks. They were excited, welcoming and polite, taking the time to answer all of our questions. Their modesty and lack of wild antics was unexpected but showed us a different side of Cherub, and in return, more of an appreciation for the two men behind the name–Jason Huber and Jordan Kelley. 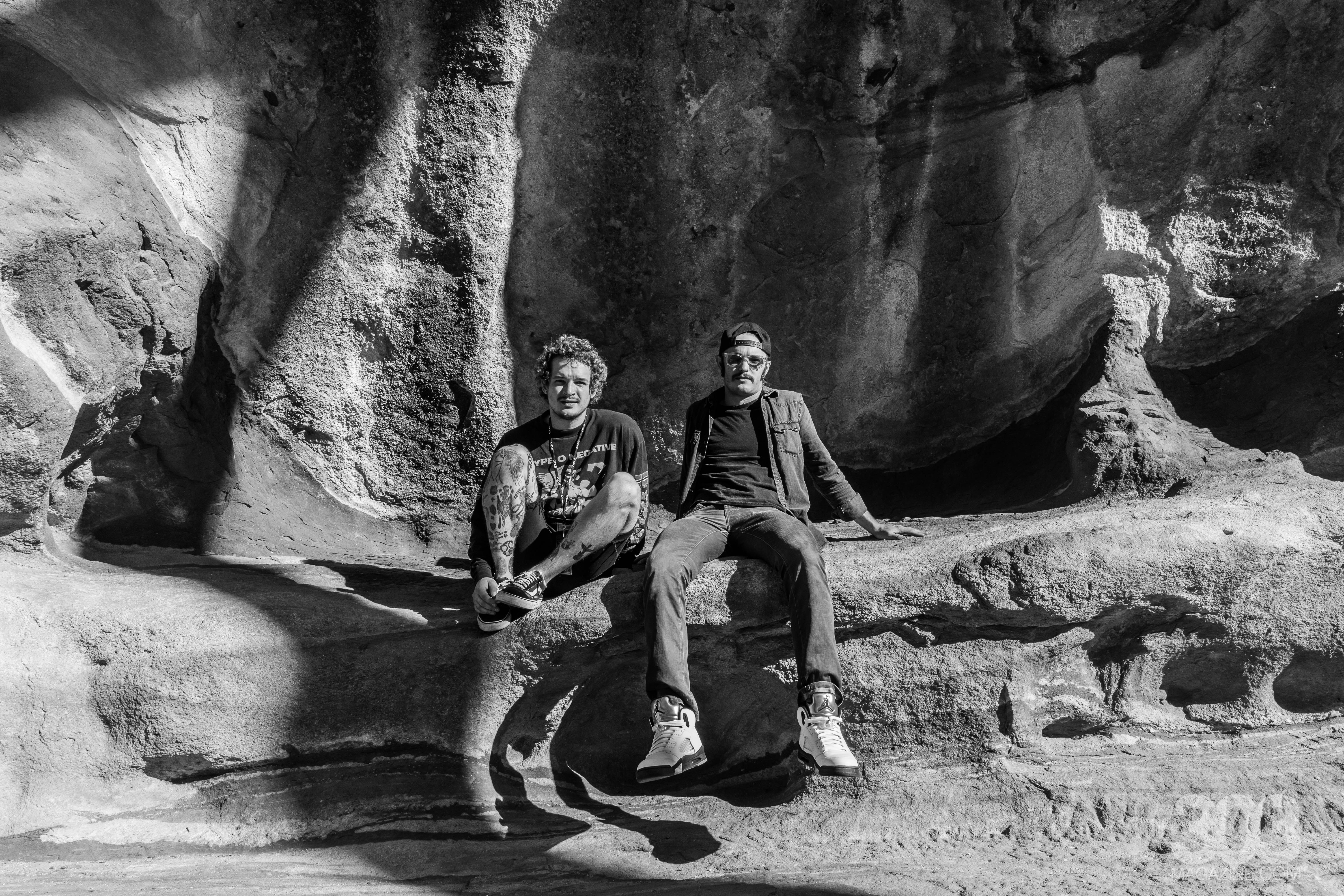 303 Magazine: You formed in Nashville but certainly show Denver a lot of love. Why is that?

Jordan Kelley: Well, because it’s been a mutual thing. We started out and we signed with a small independent label called Elm and Oak. Immediately they brought us out to Boulder [where it’s based]. Our first fan base, or reaction to our music outside of Nashville was in Colorado. It’s been love ever since.

303: This is your first headlining Red Rocks show. How does it feel?

JK: We’re super pumped. We’ve gotten lucky enough to play here twice before and that was really amazing both times but coming with our crew and being able to do our thing with a full show, and be able to play a full set, it’s really awesome and really special for us. I forgot how special it was until I walked in, and every time I walk out on that stage it’s just like damn. It’s breathtaking. 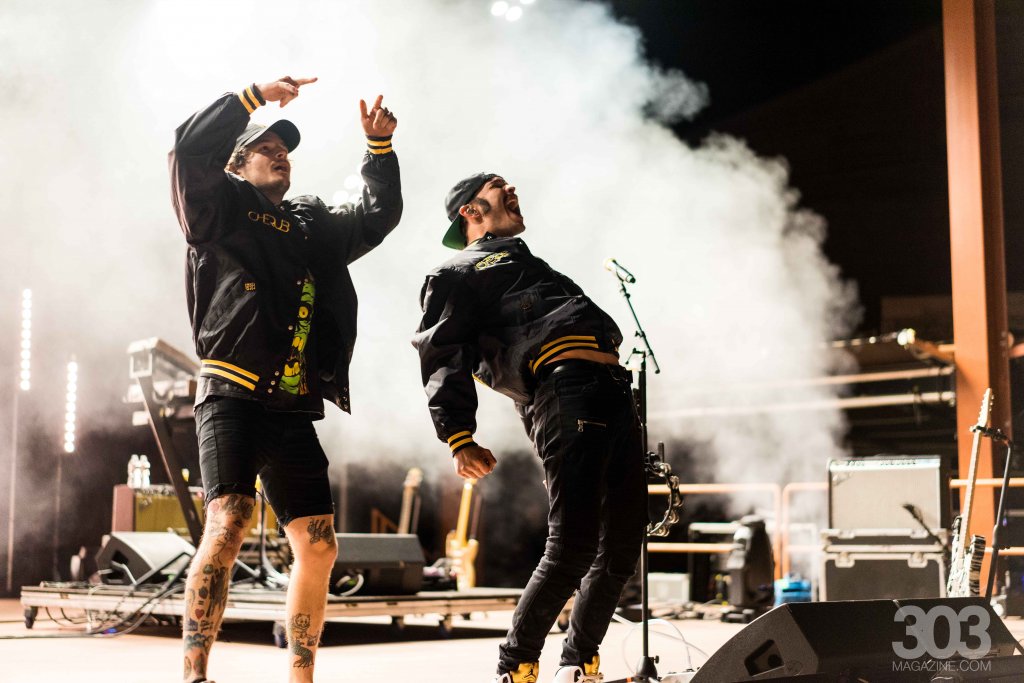 303: So you’ve been to Denver quite a bit in the past, what’s your wildest Denver story?

Jason Huber: It’s not really a wild story but one of the times we were here we got to play with Afroman. We did a collaborative set. It was a party hosted by WeedMaps and Native Roots so it was like a dispensaries party and we got to perform a set with Afroman–a couple of our songs, a couple of his songs. It was a trip. He came in for soundcheck and all he had was his iPod and a deli sandwich.

JK: He didn’t have a guitar, he had to borrow ours.

JH: He borrowed like everything. That was ridiculous, but awesome though. 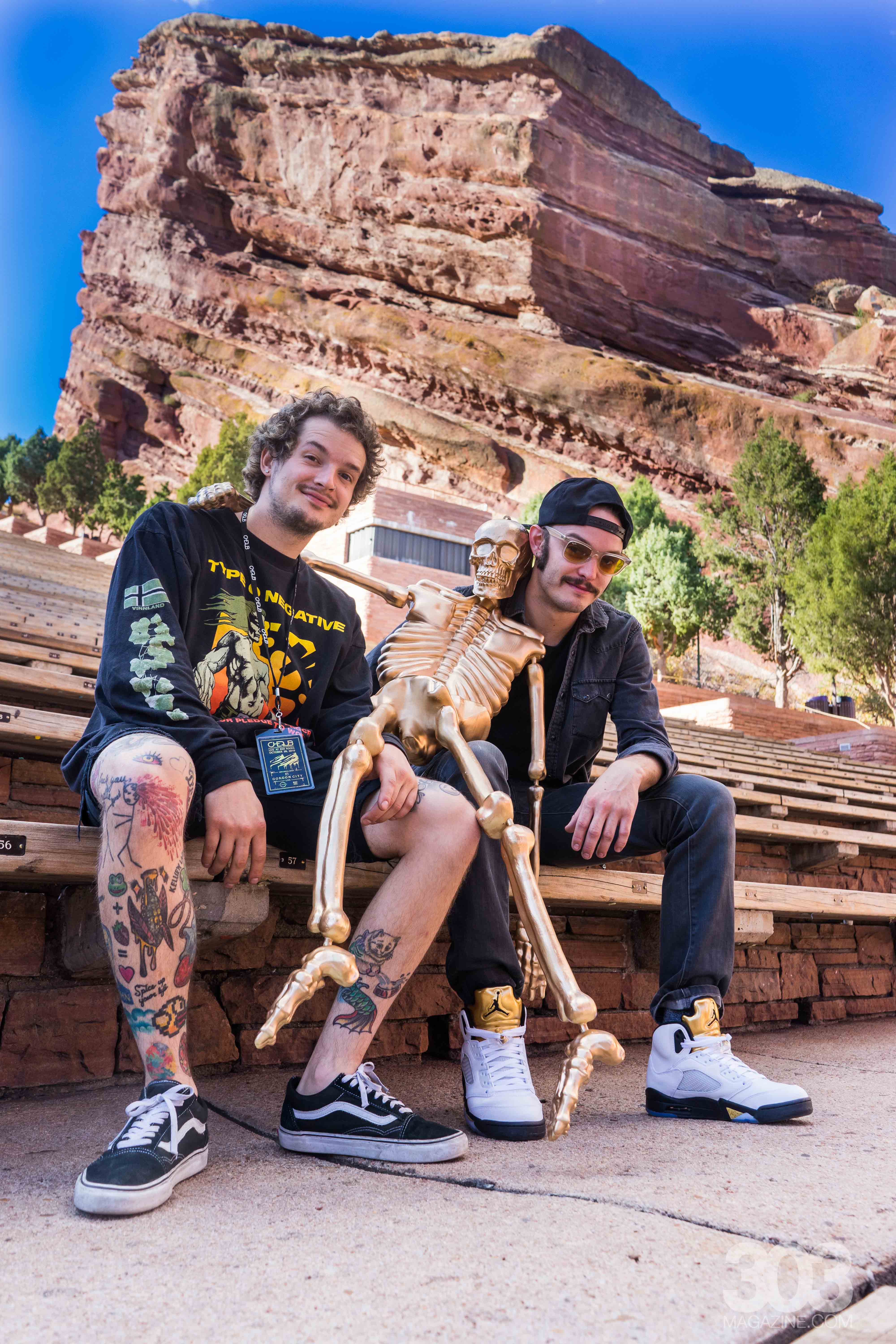 303: We heard you have a couple days off here in Denver. Do you have anything in particular planned that you’re excited for?

JK: Just hanging out with friends and chillin’.

JH: We have a couple parties planned around town too. Out good friend Elliot Lipp is playing a show tonight, so after our red Rocks show we’re gonna go play with him.

JK: He’s playing an all vinyl set and we really enjoy playing all vinyl sets together. And I may or may not have new test pressings of  the record with me so…

JK: Yeah, he’s the man. We have like four to eight songs in cyberspace right now that we want to release together. I’m really pumped on it. 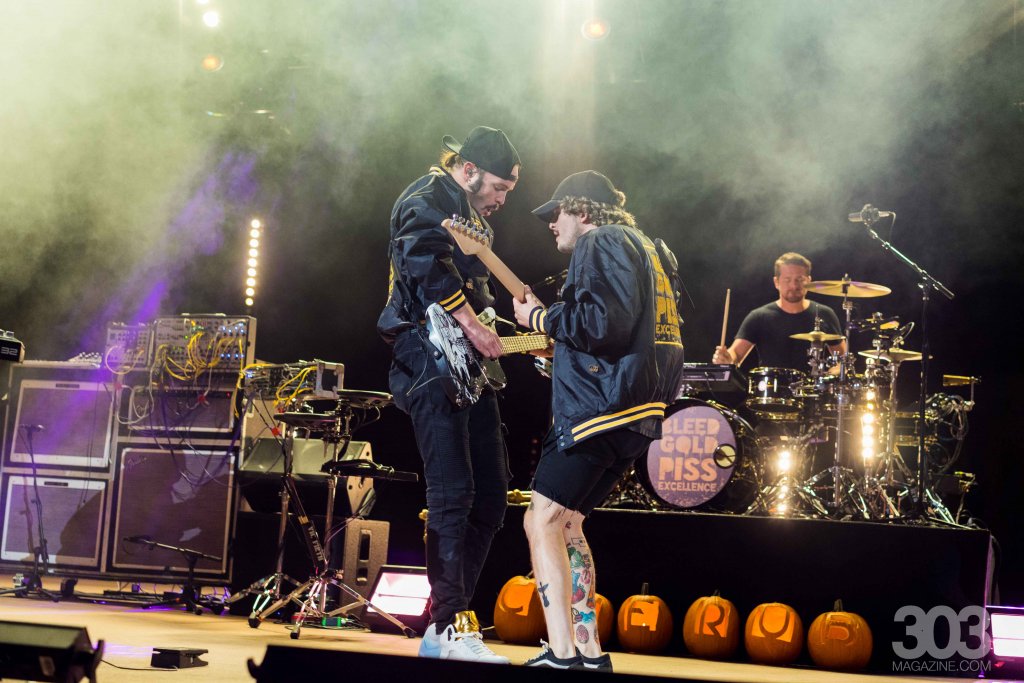 303: Let’s talk Bleed Gold, Piss Excellence. It seems like you took a bit of a different direction on this album. Why is that?

JK: We don’t ever want to pigeonhole ourselves by any means, sound-wise. It’s not that far off from what we’ve put out in the past but we always want to try new thing and put some curve-balls on the record so that people realize we don’t plan on sticking to a certain type of sound. And it just happens naturally honestly.

JH: It’s not that we intentionally try to depart from the previous records…

JK: …other than the fact that we don’t want to recreate the same song over and over again. But this is just what kinda what felt good when we went into the studio. It was definitely much more of a collaborative effort, moreso than previous records. Just with playing with a live band, this is the first time we’ve cowrote with somebody on one of the songs on the record.

JH: I guess with two songs on the record because of the song with T.I. doing his part too.

303: Speaking of collaborating, how did you get in touch with T.I.? What’s the story behind that?

JK: He found our new CD and he made the effort to come out to one of our shows, and then invited us to eat with him and hang out with him and his family. We went bowling with his family and then went to the studio. We have another song that didn’t get released that hopefully he’ll put on his album. It’s like a slow jammer. I got to sing on it and I hope that that gets released ’cause it’s tight. 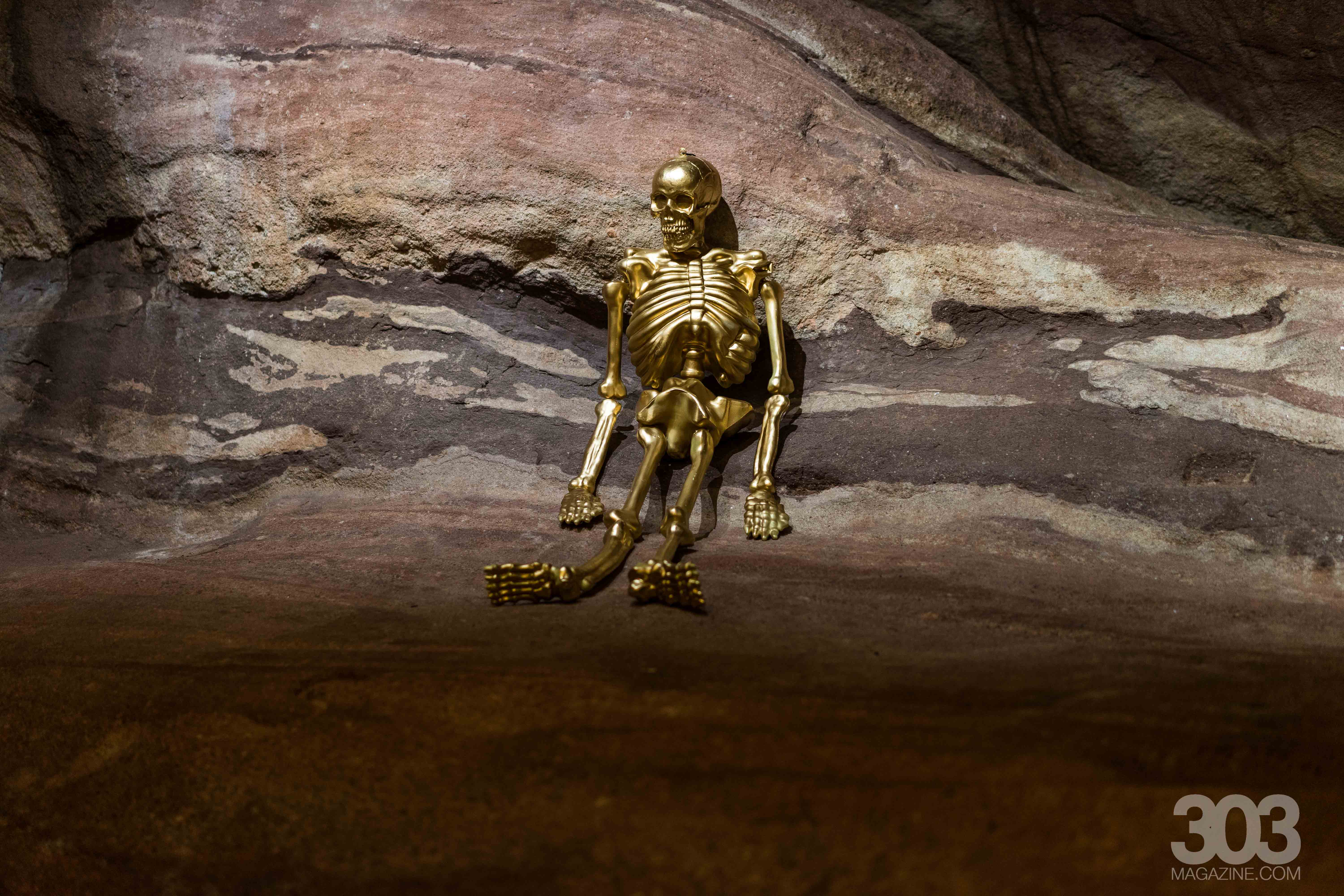 Theodore the golden skeleton. 303 Magazine brought Theodore as a prop for the interview, and Huber kept him on stage for the Red Rocks performance.

303: Is your Halloween weekend Red Rocks show going to be an annual gig now?

JH: Hopefully. Denver has kind of been an annual thing for us for the past three or so years–Colorado in general because we’ve done Fort Collins too. We’ve been making it an annual thing to do to play in Colorado so hopefully we continue to do that. Denver is rad.

303: Do you have any Halloween costumes for tonight or this weekend?

JK: We don’t have any for tonight.

JH: Yeah, we decided since this is our first big boy headlining Red Rocks play that we want to take the show completely seriously.

JK: We were all gonna dress up like the Steve Zissou crew but all of our photos from Red Rocks would make us look like we were Divo or something [laughs].

JH: At the end of the day we wanted to take the show as seriously as possible. But with that said, Monday is the actual Halloween and is one of my favorite holidays. I love dressing up.

303: Since tonight is a big night and so special, do you plan on recording any tracks live?

JK: I think that the whole set is recorded live in both audio and visual. I don’t know if we necessarily have any plans to release it, we’re just kinda gonna lock it away in a vault and maybe we’ll do something with it later.

All photography by Meg O’Neill. Check out our full gallery of Cherub’s Red Rocks performance here. 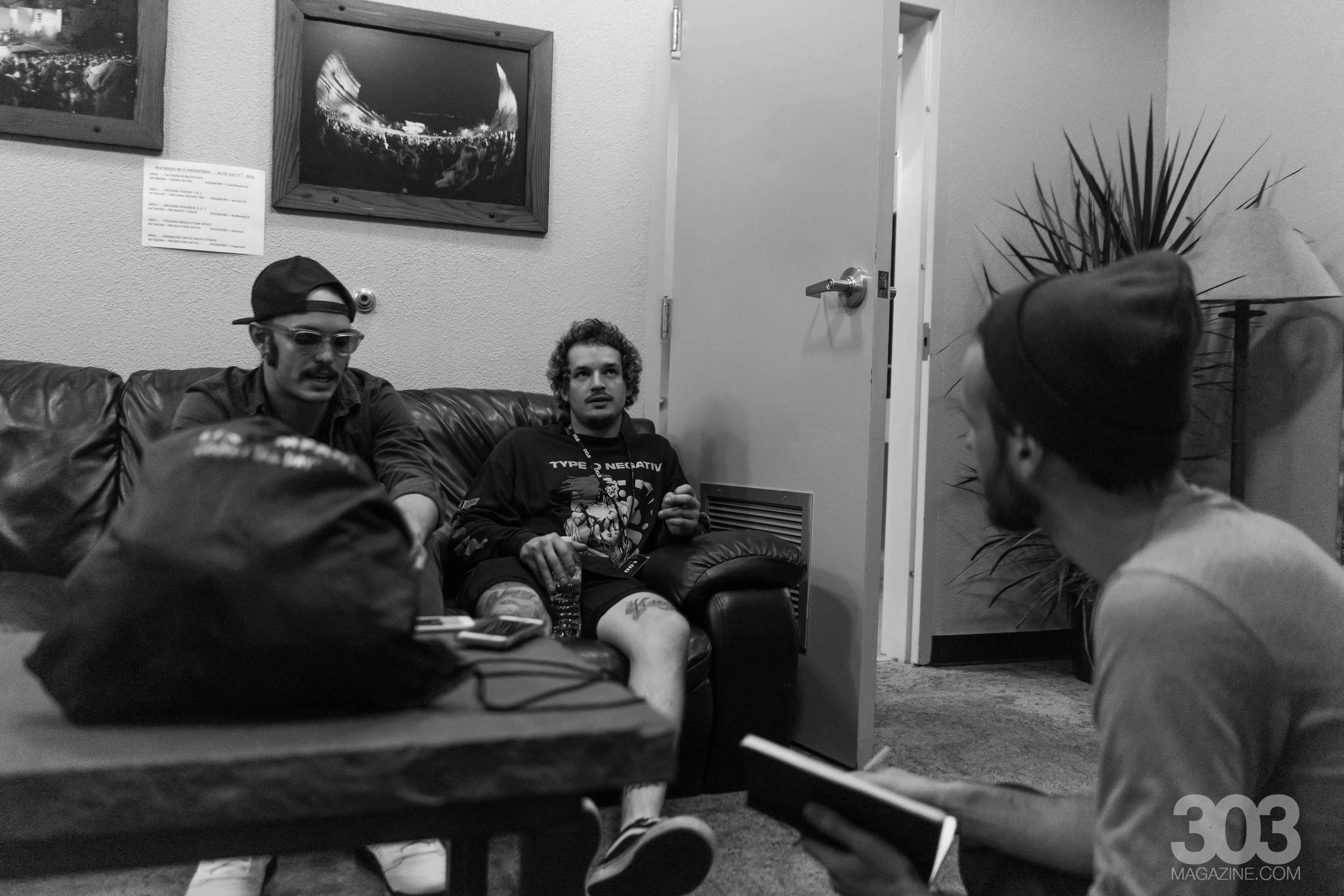