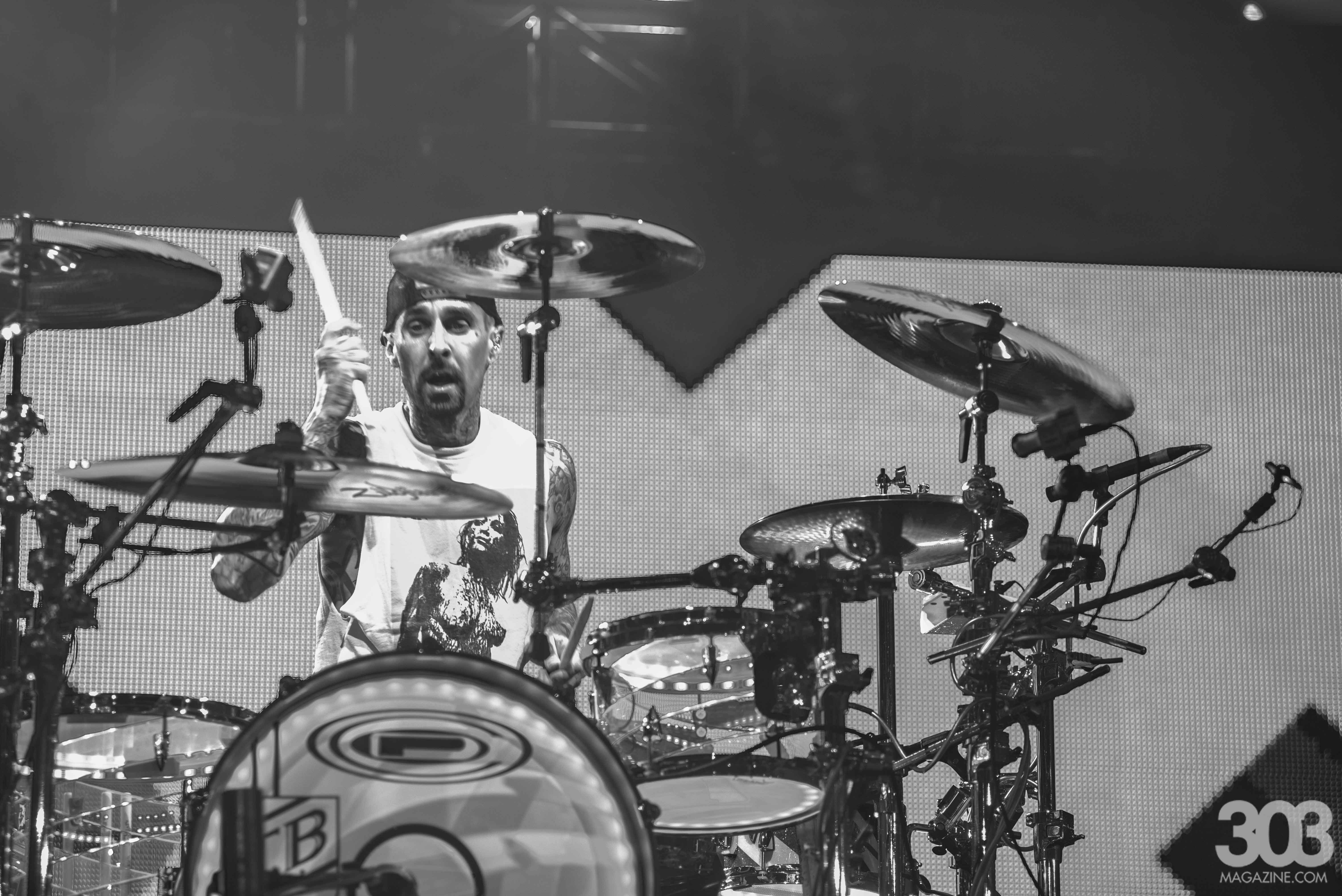 “Ladies and gentlemen, the pants-less debacle that is blink-182!”

We all remember it, three young dudes running around Los Angeles, seemingly without clothing. The 1999 hit “What’s My Age Again” sky rocketed the band into superstardom and has remained relevant 17 years later, proven true as the announcer from Tuesday night’s show at the Pepsi Center gained extensive applause from the sold-out crowd for his throwback reference.

The band that began inside original member Tom DeLonge’s garage all those years ago has gone through a lot in the last decade. Multiple hiatuses and personnel changes can be rough, but with their latest release California, they have proven not much has altered in their musical vision. This massive tour, touching 40+ dates all over North America, was mostly greeted with sold-out venues and timeless fans, ready to belt the classics. 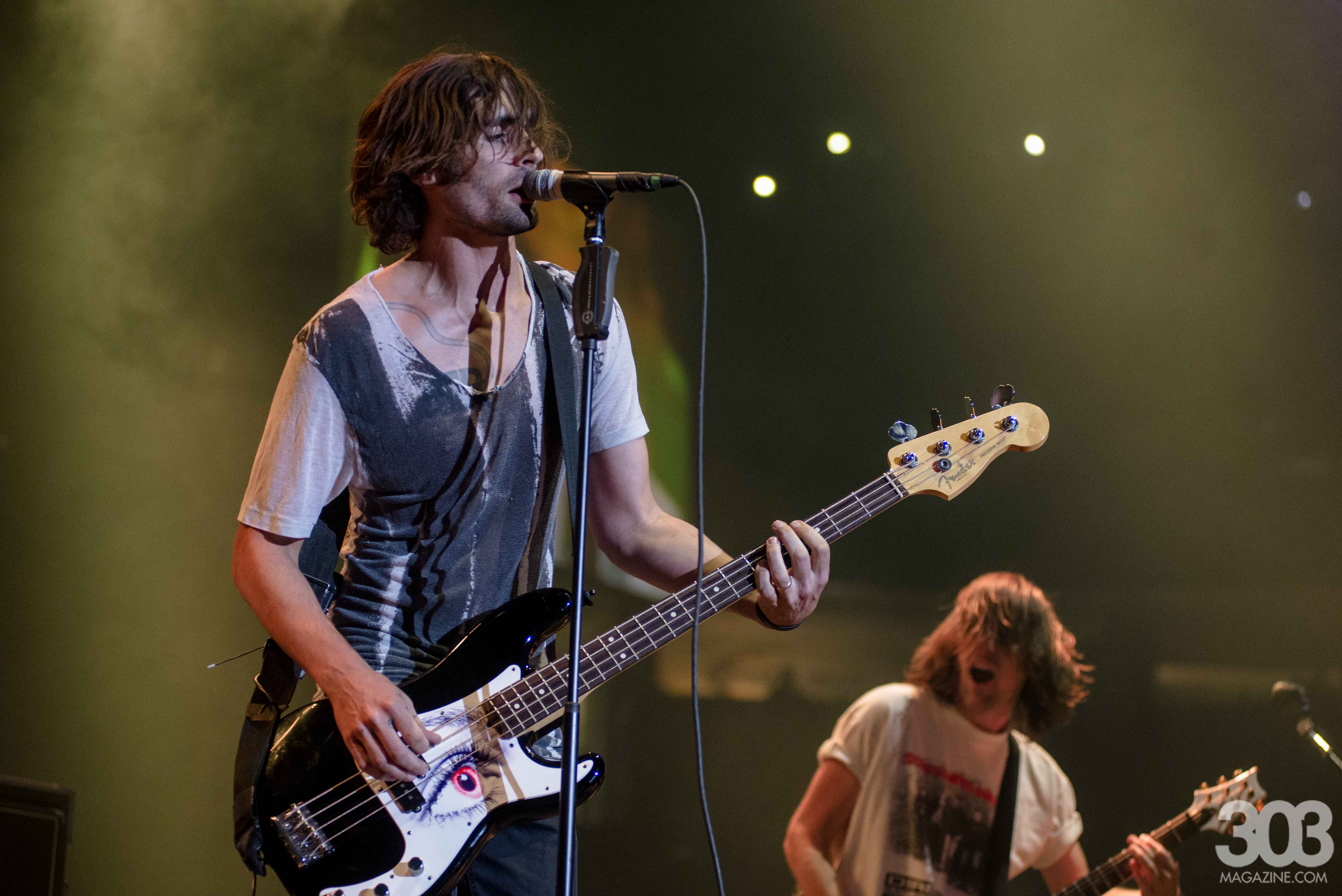 The Pepsi Center opened up the night with DJ Spyder warming the crowd. The All-American Rejects were then prompted to the stage to perform  hits such as, “Dirty Little Secret” and “It Ends Tonight.” With a few new songs in there, the group was able to reignite any possible thought that they had disappeared.

A Day to Remember was the next act to catch, and they certainly did not need to search long for a fan base in the Mile High crowd. Epic roars and cheers accompanied tracks like “Paranoia” and the uproariously welcomed “A Plot to Bomb the Panhandle.” With toilet paper rolls being chucked into the crowd, the lead singer running around the heads of the crowd in a hamster ball and confetti canons, these boys left the stage hot and ready for the headliner. 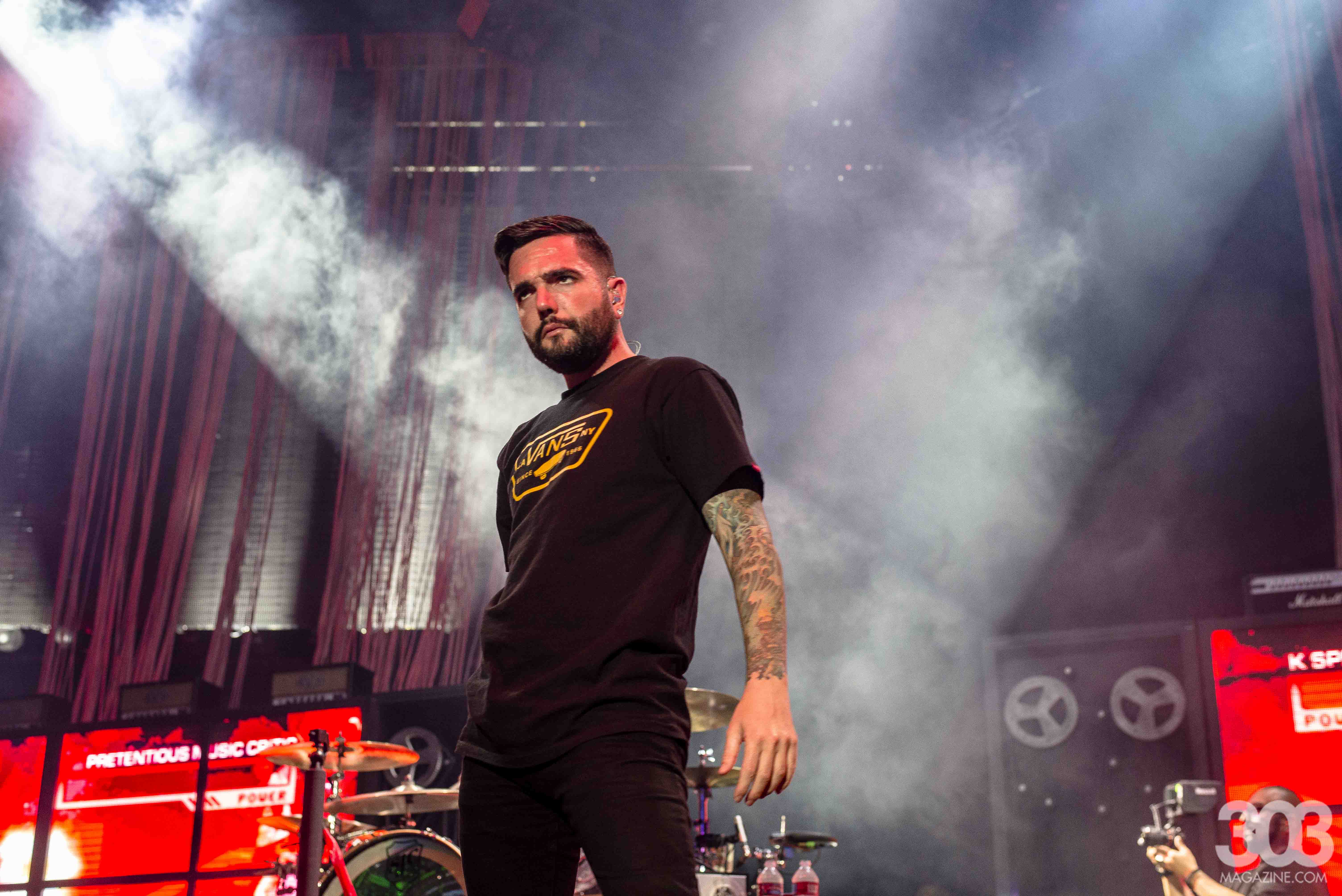 At 9:25 sharp, the main attraction made their way to stand behind a large black curtain on stage. Once the familiar riff of “Feeling This” began, the curtain blew away and the boys stood in front of a large, fiery “FUCK” ablaze on the back wall. “What’s My Age Again” and “The Rock Show” felt like warm hugs for older fans, playing homage to those who have stuck around for the last 13 years and longer.

“You guys are my favorite show all day,” said bassist Mark Hoppus with a smirk. You would never know the next song was a new one by the way the lyrics poured out from the audience, as “Cynical” was the first California track of the night. “First Date” brought the vibe back to the olden days, and true to live Blink, the last of the lyrics were changed to “forever and ever/let’s make this last for Denver.” 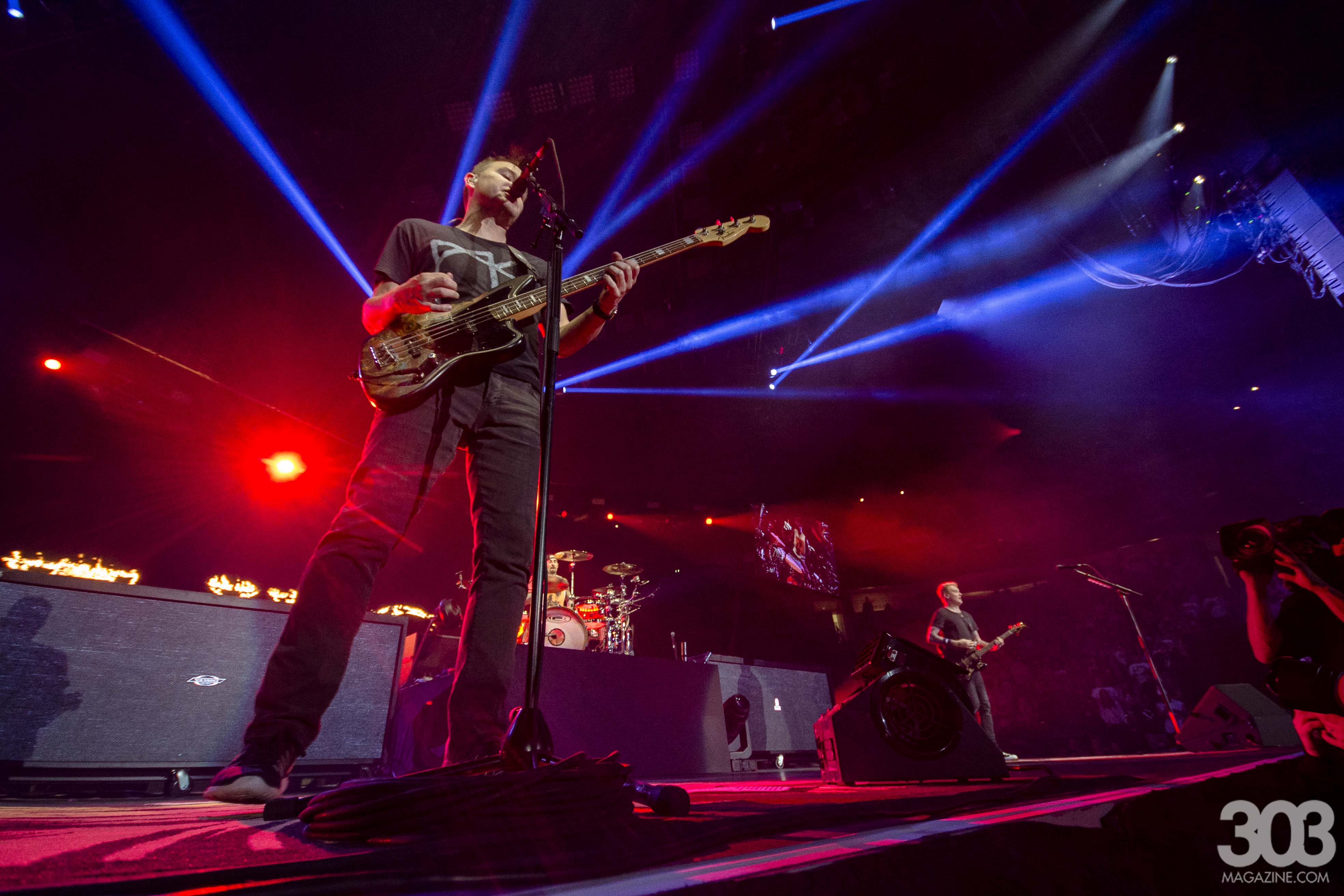 “Down,” “I Miss You” and “Bored to Death” made up the meat of the show, before “Dumpweed” came through as the Enema of the State throwback we all needed. As Mark humped his microphone, he gave an excellent speech on the marriage of a Jimmy Eat World and a Taking Back Sunday song being the creator of “Stay Together for the Kids,” which went into a sing-a-long with Matt Skiba of “Reckless Abandon.” After the two Take Off Your Pants and Jacket numbers, Mark poked fun at Denver’s recreational habits.

“You guys are great, way better than St. Louis. I don’t give a shit about altitude; I like it. But I am calling the cops on all of these dispensaries. Go ahead and boo me, go ahead and try pot and see what happens to you.”

The next segment felt a bit impromptu, as Mark inquired, “Hey Travis, is this the one where you start?” To which famed drummer Travis Barker shrugged and spit from off of his raised drum set. “Not Now” and “Violence” were the bread surrounding an epic Travis solo sandwich, which then turned into the short but sweet “Happy Holidays, You Bastard.” “Dysentery Gary” and the new ballad “Los Angeles” closed out the first set. 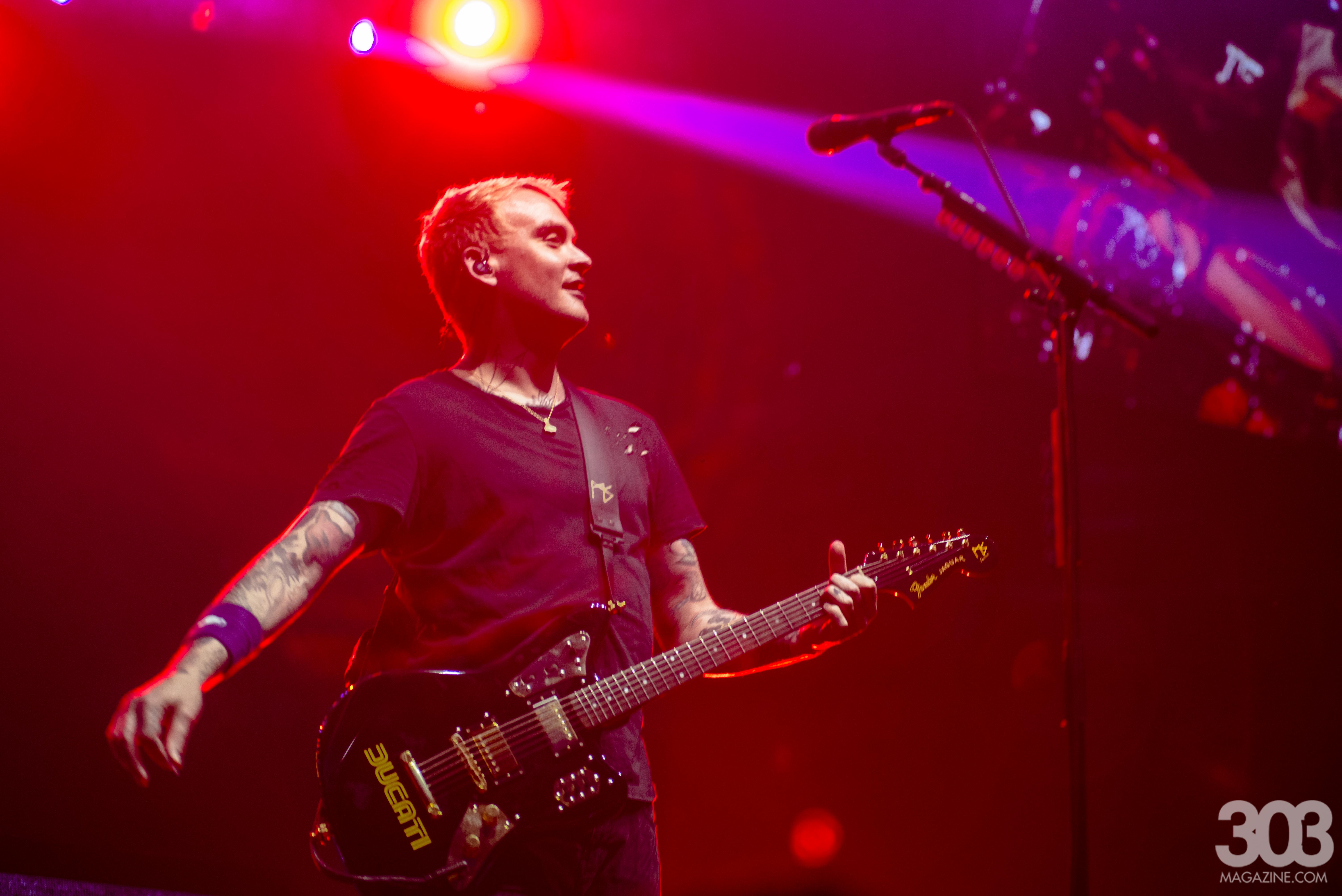 Without doing an official encore, the fellows left the stage dark for a moment and returned for three more bangers. One of the oldest Blink tracks, “Carousel,” brought them back out. “All The Small Things” got the crowd singing again, but it was the final song, “Dammit,” that gathered the most excitement from the fans of the entire evening.

Once the encore was completed, Travis threw his sticks into the sea of hands, Matt waved goodbye timidly and Mark strummed a bon voyage tune as he walked towards the backstage backwards. The trio had rocked the full house and nothing was left on the stage but confetti and the hope of another new album and a 2017 tour.

All photos by Austin Voldseth