Chromagrain at Svper Ordinary Revels in Color, Geometry and Nature

Studio partners David Rice and Blaine Fontana compliment each other beautifully — both thematically and stylistically — in their shared exhibition “Chromagrain” at Svper Ordinary gallery, running until the end of September. Their pieces thread together color, geometry and inspirations from nature. And they ask the question — if symbols are placed in new contexts, do they still represent the same thing?

We must explore, in viewing this art, how our perceptions of reality rely heavily on our agreement of what certain symbols and signs are supposed to mean. Rice and Fontana each use a cunning mixture of abstract and realism to create juxtaposing symbols that combine in powerful instances to support that question. These instances are very similar to discovering the plot twist in a story; you will feel surprised and slightly ashamed you didn’t think of it earlier.

Svper Ordinary gallery is within The Source — a large space with many different vendors, including cafes, restaurants, a brewery and a butcher — and the vibe is delightfully different from most other galleries. Not everyone is there to look at art and it feels more approachable to pop in without art gallery experience, perhaps after getting a drink or a cup of coffee. And this exhibition pleases many different appetites, something that speaks even more clearly to the artists’ shared interest in contextual symbolism. 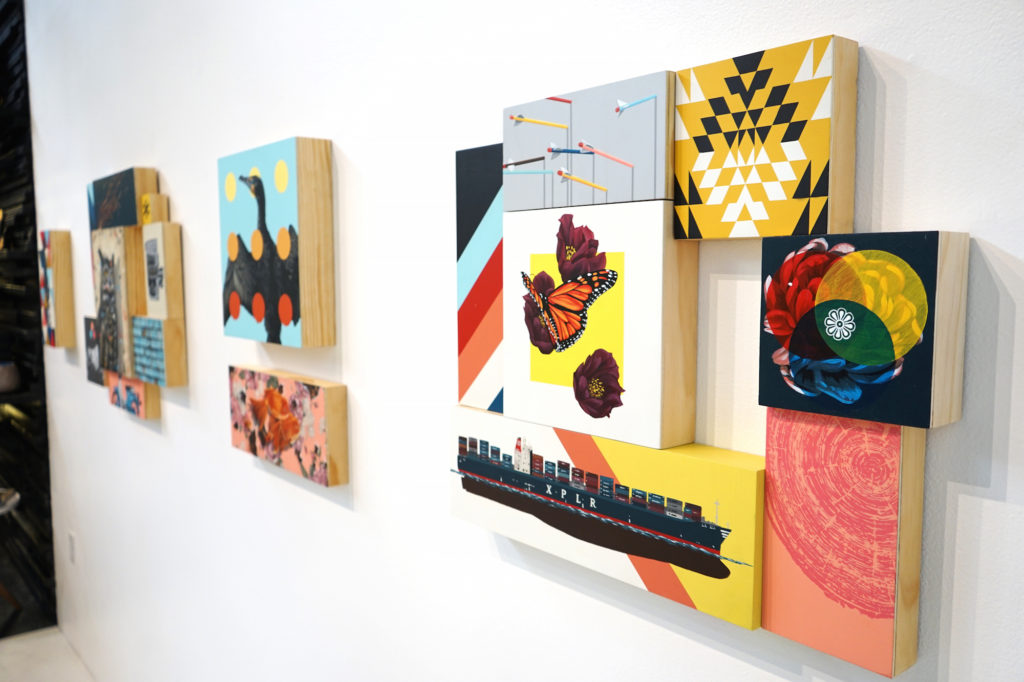 Rice grew up in Colorado and his art is obviously influenced by his experience in nature. What makes his work different from other nature-inspired pieces is his pairing of manmade objects with the natural ones. In “Balance,” Rice explores seven separate symbols of balance including tree rings, a large ship and thrown darts. In doing so he creates a combined reality with each separate element representing the same theme and emphasizes the possibility of manmade and natural forces coexisting. Enforcing that more is the way he literally separates these symbols on varying sizes of boxes, placed next to, around and below one another and sharing similar palettes.

In other pieces by Rice, he focuses on one symbol of nature and uses contrasting tones in unexpected ways to emphasize the object as organic rather than synthetic. But instead of contradicting each other, the organic and synthetic collaborate to produce something unique and often curious. In many ways, Rice seems to be foreshadowing the future of our interactions with nature — that eventually there will be no boundary between manmade and natural and we will have to change our perspectives of that boundary in order to accept it. 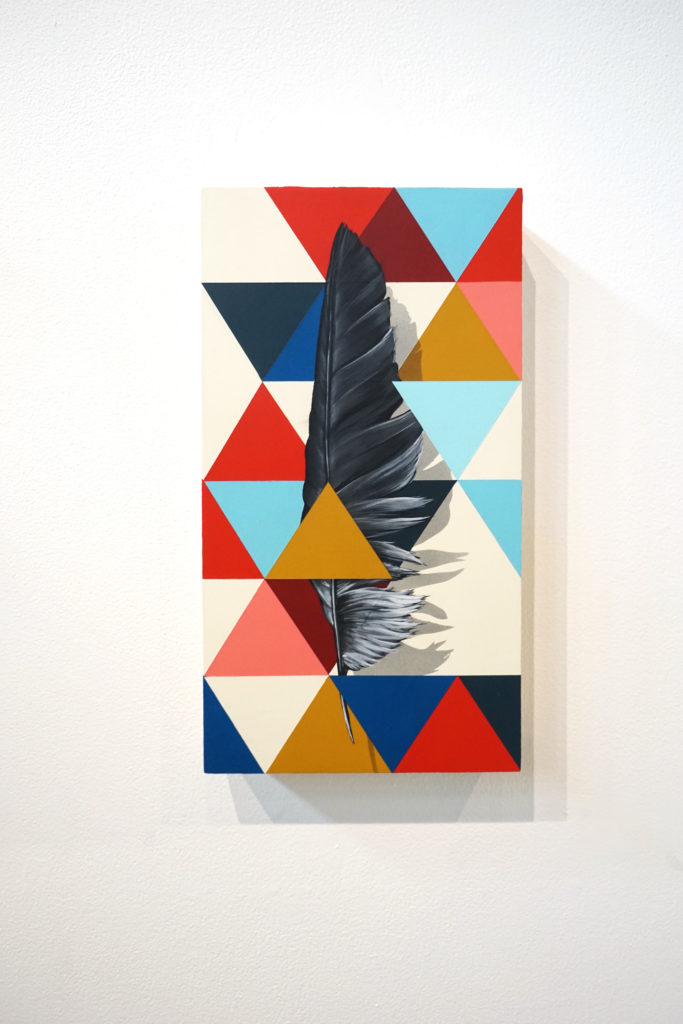 Fontana’s pieces are imbued with crossing boundaries as well, though instead of mixing manmade with organic, he explores symbols of our contemporary visual culture with folklore and myth. He does not ignore the boundaries between nature and man, however, and each of his pieces are made on birch panels or with reclaimed wood, while using acrylic and aerosol paint. The colors are intense, inspired by graffiti and our ever-increasing need for more choices. 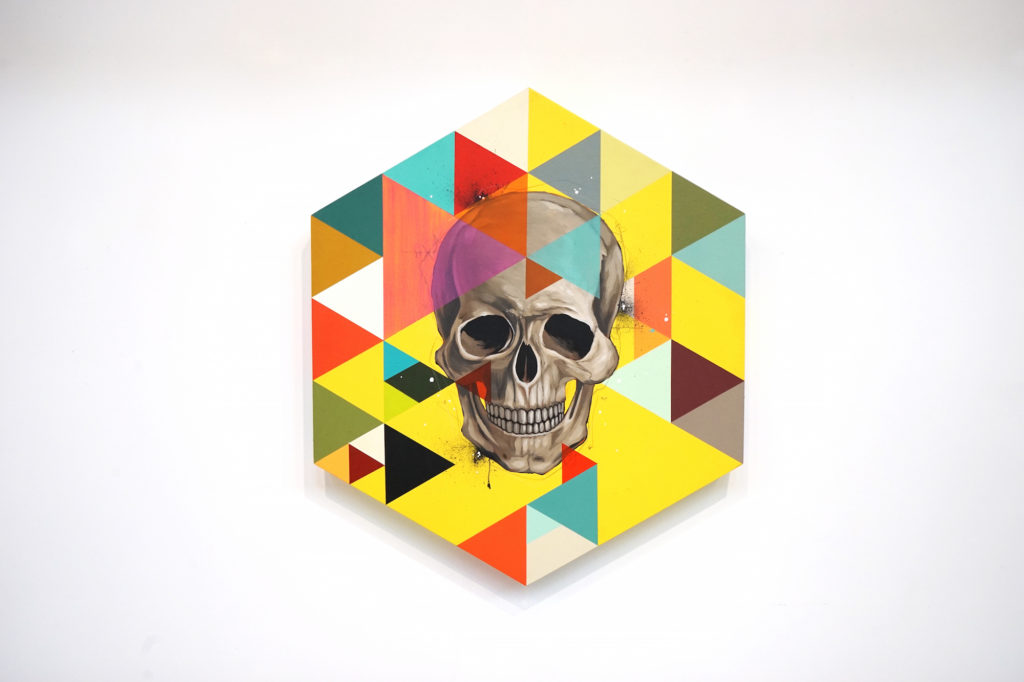 In Mortal Quilt, Fontana balances the corporeal curves of a skull with triangular shapes painted in a spectrum that reminds one of candy — something delicious and fun — giving the impression of life to a symbol of death. We have to ask ourselves if our expectations of the symbol of death are as accurate as we previously thought. In a book of Fontana’s art, he remarks that his pieces are often “a microcosm of stories”— referring to the idea that symbols can be skewed based on how they are presented and are most likely different from person-to-person. 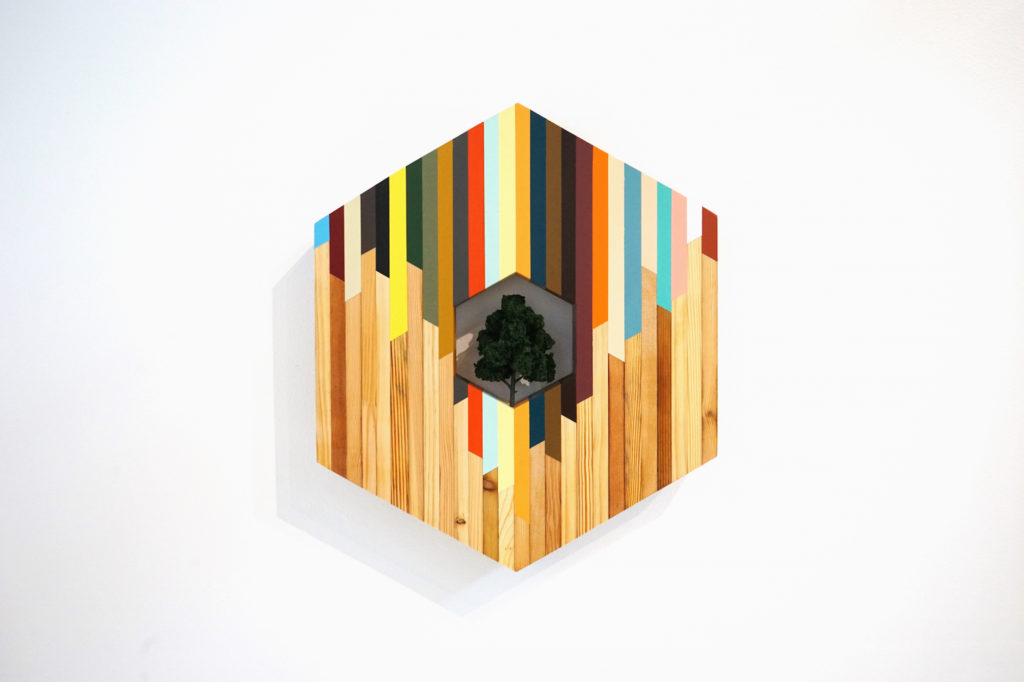 West Fresh is the best representation of this line of thought because it takes a fairly well-known hand signal and places it in front of an unusual rainbow, giving two focal points that can contradict each other or collaborate to create something new. Fontana obviously appreciates the mingling of contemporary with traditional, and does so with a particular style that would be hard to duplicate.

These two artists who work along side each other in Portland, Oregon, also work together to present this colorful series that, aside from being visually pleasing, will inspire you pay closer attention to the signs and symbols that we trust without dissecting. They also demonstrate that boundaries are not as rigid as we think they are.

Go here to read our interview with Fontana about another art project in Denver.