Review – Digable Planets be to Denver what Key be to Lock

Denby GardinerAugust 18, 2016Music
Home
303 Magazine
4 min read
Don’t call it a comeback. Just when we all thought Michael Phelps was wrapping up the greatest comeback of the summer, Digable Planets rose up from their tomb of a hiatus and throw down an epic, energy-packed tour. The funky jazz crooners made Denver’s month by stopping by the Gothic Theater on Tuesday night. 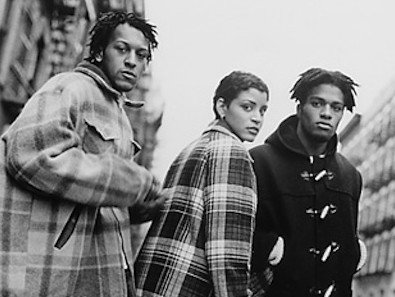 Having made their mark on the golden era of hip hop more than 20 years ago, the trio that was once basing themselves out of Brooklyn has been greatly missed from the community. Preaching peace, love, happiness and funk, their message remains relevant after all this time. With several “Black Lives Matter” references throughout the night, it is clear we still need the positive teachings of the lyrics written by Doodlebug, Ladybug Mecca and Butterfly.
Tuesday, being a dark and rainy evening, offered a perfect evening of ducking into a small venue to throw the clock back to yesteryear and enjoy some old school jams. A similar thought must have embedded itself in minds throughout the city, as the theater was packed solid with masses of people. For a weeknight, the atmosphere felt untethered and open. Gathering on the stage just before 9:30 p.m., the three heavyweights of their genre glided out like a dream, Ladybug Mecca toting a smoking bundle of sage as the crowd greeted them with overwhelming support. Denver was ready.
“Reunited and it feels so good,” soothed out of instruments played by backing band The Culprits, all who would showcase their impeccable musical talents through individual segments alongside the main attraction. The opening portion of the night carried significance, beginning with “The May 4th Movement Starring Doodlebug” and “It’s Good to be Here,” the opening intro and track to albums “Blowout Comb” and “Reachin'” respectively. 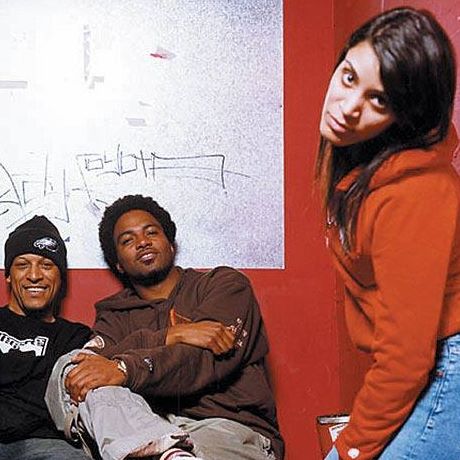 The beard on Butterfly’s face may have grayed, but the spirit and soul of the group has not dwindled at all. Sounding exactly like they have since two decades ago, they went on slicing through hit after hit from each of their iconic original albums. “Pacifics” and “What Cool Breezes Do” followed by “The Art of Easing” and “Black Ego” kept the strategy of dotting a little on each album in order, as if to spark a light of memories for the fans in the crowd who may have been around when the tracks were soldiered “newly released.”
Although the texture of their voices have been seemingly altered by the years, at least the flow of the rhymes has stayed right where it should. When Ladybug stepped up to flow the ever-popular first verse of “Nickel Bag,” her part was accompanied with hordes of voices rapping with her.

“Feels good to have the club lit up on a Tuesday,” Butterfly laughed into the crowd from where he had been scratching all night. “How the band sound?”

From there, Butterfly introduced each member of the integral backing band, which included a drummer, bassist, keys player, guitar and keyboardist and percussionist. Drummer Conrad Real, while rocking a signature Superman tee, pounded away an epic solo on a set that was dressed in a logo replica of the Blowout Comb album cover design.
“Jettin’” and “9th Wonder” brought the vibrant setlist to the end of the night, which sent The Culprits into a “Jungle Boogie” for the ages. Upon promising their next song was up, it came as a shock to no one that that chosen song would be “Rebirth of Slick (Cool Like Dat).” As each rapper laid out their personal verse to the beloved hit, the lyrics finally circle back to Butterfly, who spit his famous final words, “We jazz like dat / we freak like dat / we zoom like dat / we out.. we out..”
However before he was really out, the famous MC demanded that the crowd “forget about everything that’s not cool for a few minutes, and chill with the band,” which rocked the house as the patrons made their way back out into the stormy night.