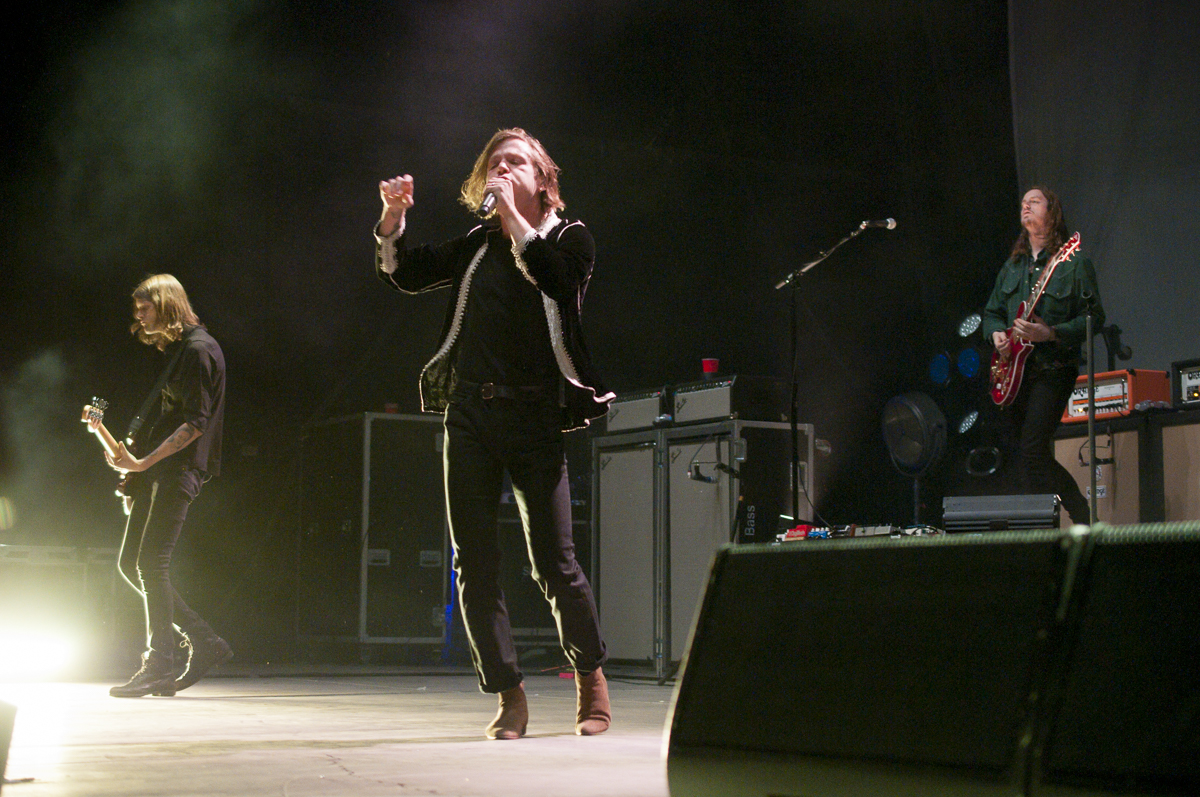 Cage the Elephant rockin’ to their tunes

Day into night, local music into nationwide talent, Big Gig delivered another memorable concert of alternative rock to loyal fans. With headliners Cage the Elephant and Young the Giant performing at Fiddler’s Green Amphitheater on July 9, 2016, not even the high heat of summer could deter fans from dancing and letting loose to head-bobbin’ beats.

The Midnight Club and The Unlikely Candidates opened up the show in the late afternoon, gaggles of girls reaching for the musicians as they rambled around stage. The Midnight Club hails from Denver, and was perhaps one of the youngest acts — fresh from high school, the band is able to hone in their talent to captivate even the largest of audiences. And coming from Texas, The Unlikely Candidates has gained popularity with their hit, “Your Love Could Start a War.” Splashing into the rest of the night, the crowd felt energized and ready for a beer-soaked night of heart-pounding jams. 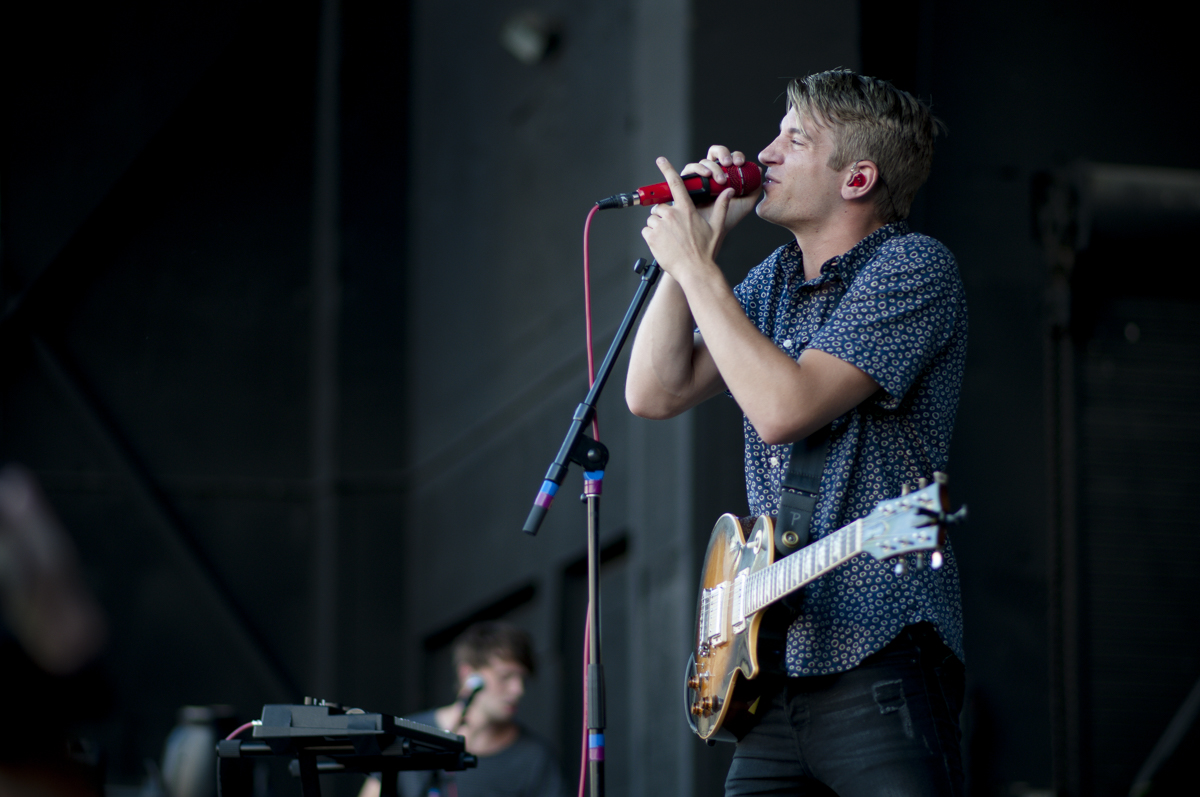 Vinyl Theatre then took the stage, pulsing forth with their hypnotic synths and digging guitar strums. Playing songs such as “The Rhythm of the Night” and “Breaking Up My Bones,” they thoroughly enchanted the Denver crowd. Whether it was Keegan Calmes’ fluid voice drawing the crowd into their music, or enthusiastic keyboardist Chris Senner pin-balling layered melodies into the air, the group has made a name for themselves inside the alternative rock world that’ll just keep growing as they garner more attention. 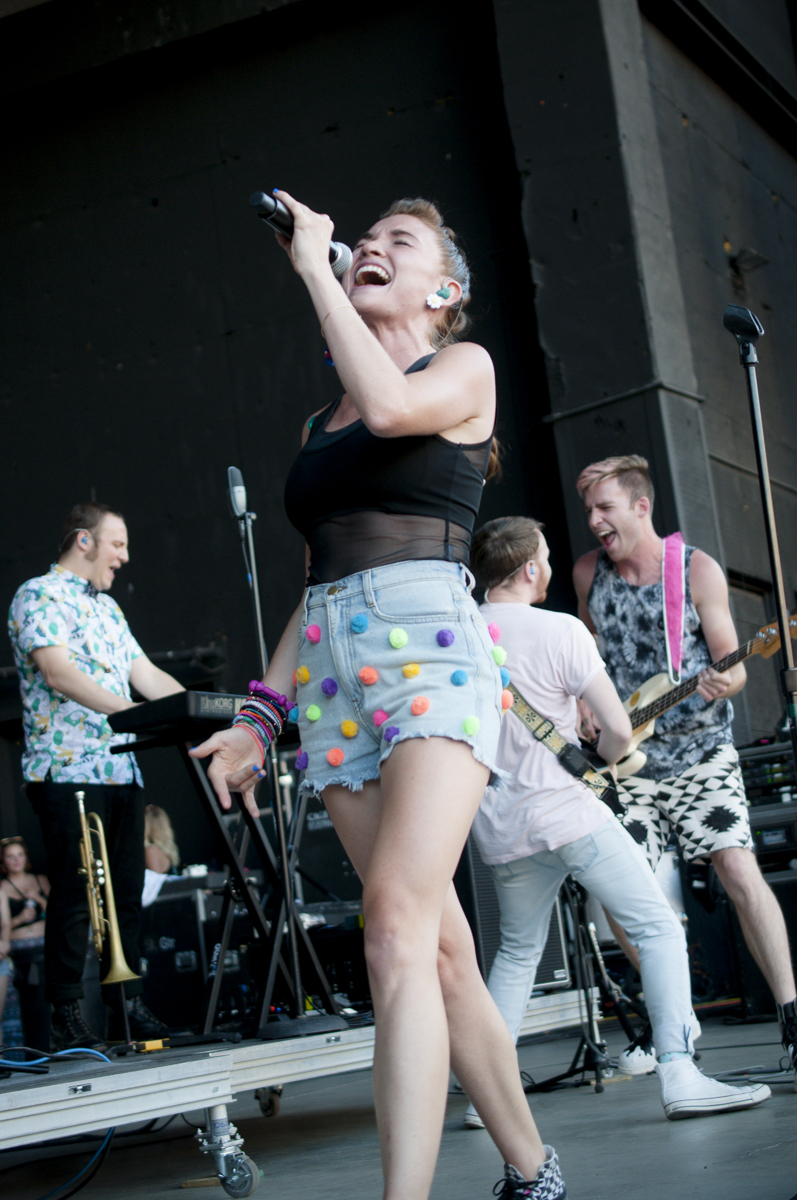 Rushing on the heels of Vinyl Theater, MisterWives popped up onto the stage. And I was hoping we could all please step back a moment, and have a moment of silence for lead singer Mandy Lee’s bubbly and effervescent energy. She twirled out onto the stage with the rest of the musicians, carrying the crowd into a mini-dance party with her feminine yet raspy vocals. The band has just come off the Bonnaroo Binge earlier this summer, and you could sense they still had the festival spirit colliding into their performance. They played their widely known hits “Reflections” and “Our Own House,” drifting into an acapella chorus of the latter. 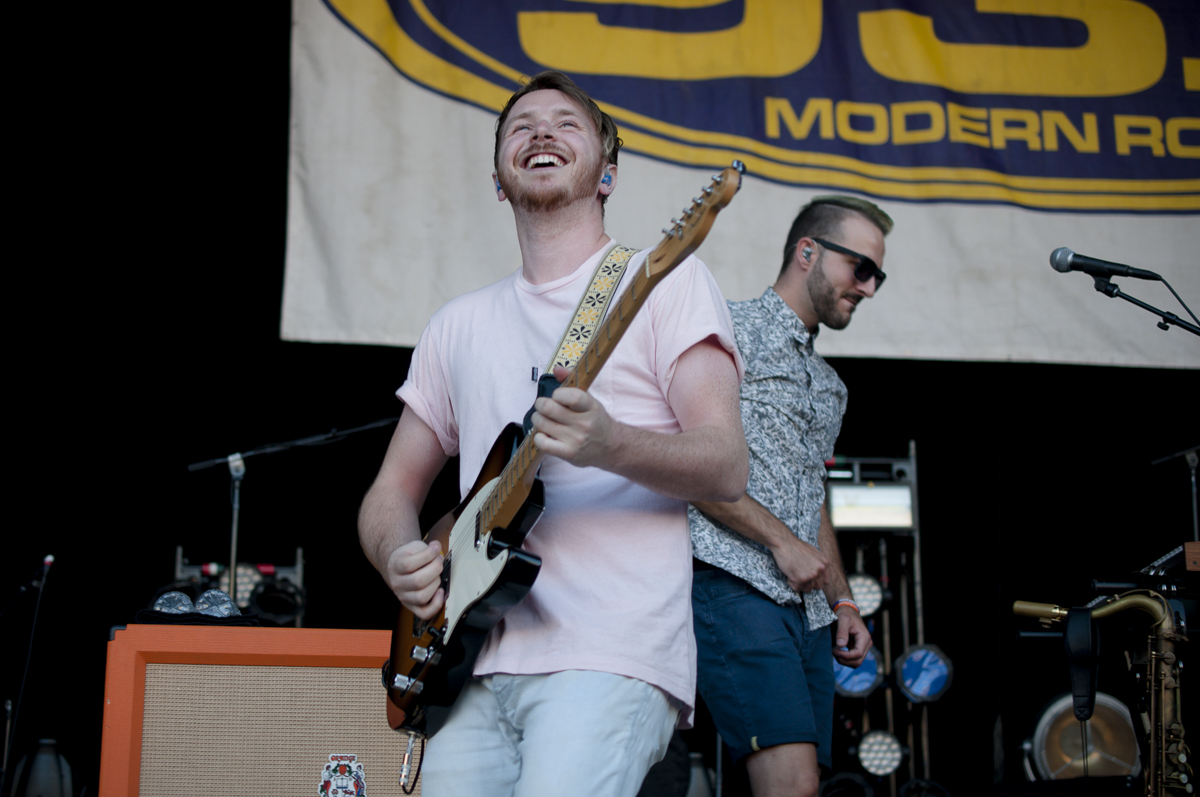 Even with lyrics such as “It’s the best I can do / Nothing is ever good enough for you / Easy on my tired eyes / They’ve been up all night,” upbeat drumming and cheerful grace exuded from the instrumentalists. Paired with Lee’s graceful prancing across the stage, one couldn’t help but dance and feel happiness swirl around.

They ended with a “Happy Birthday” adieu to Lee (because…it was her birthday…), and they left the stage, smiles and eyes bright with a musical exertion, leaving the crowd satisfied with their bright performance. My only complaint for the whole night was why did the acts have to be so short in their time? Of course, with multiple bands performing, one has to adjust for set-up and take down, but I was hoping we could have at least ten more minutes with each band. The sun and heat weren’t the only things making us thirsty — I wanted more music, more rock beats to satisfy my love of music with.

Opening with “Love Songs, Drug Songs,” the men of X Ambassadors showed the crowd that they weren’t messing around with what they came here for — down and dirty rock n roll. 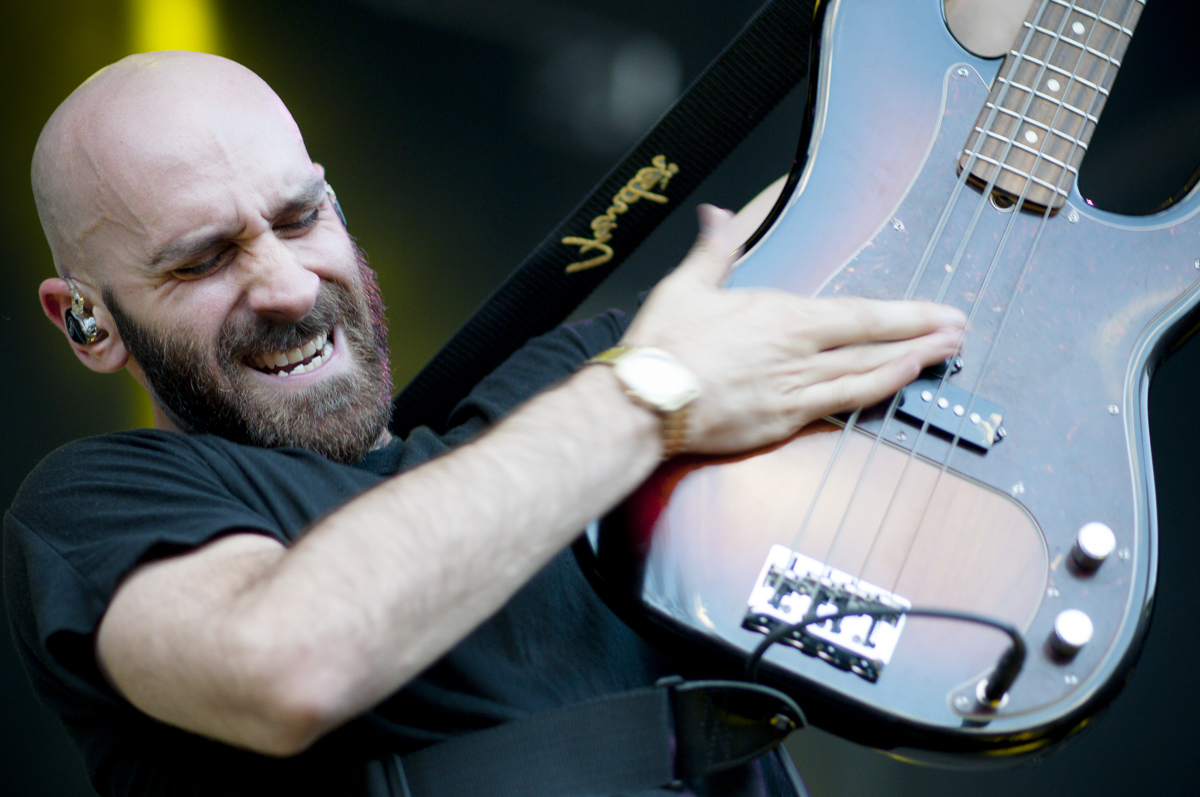 As their set progressed, they dedicated “Unsteady” to the officers who last their lives in the Dallas shooting, as well as to Philando Castile and Alton Sterling. “Silence is violence,” they spoke to the crowd, and it was a necessary interruption on this free-flowing day. Their lyrics took on new meaning and life, and I was reminded concerts and music can not only give us an escape from the world, but also help bring about change into it.

They jumped back into their roots of rock n roll with “Low Life,” getting the crowd to laugh along and agree with the lyrics, “I’m nothing but a low life / Thinking about my own life / I’m trying to fight the good own fight.” 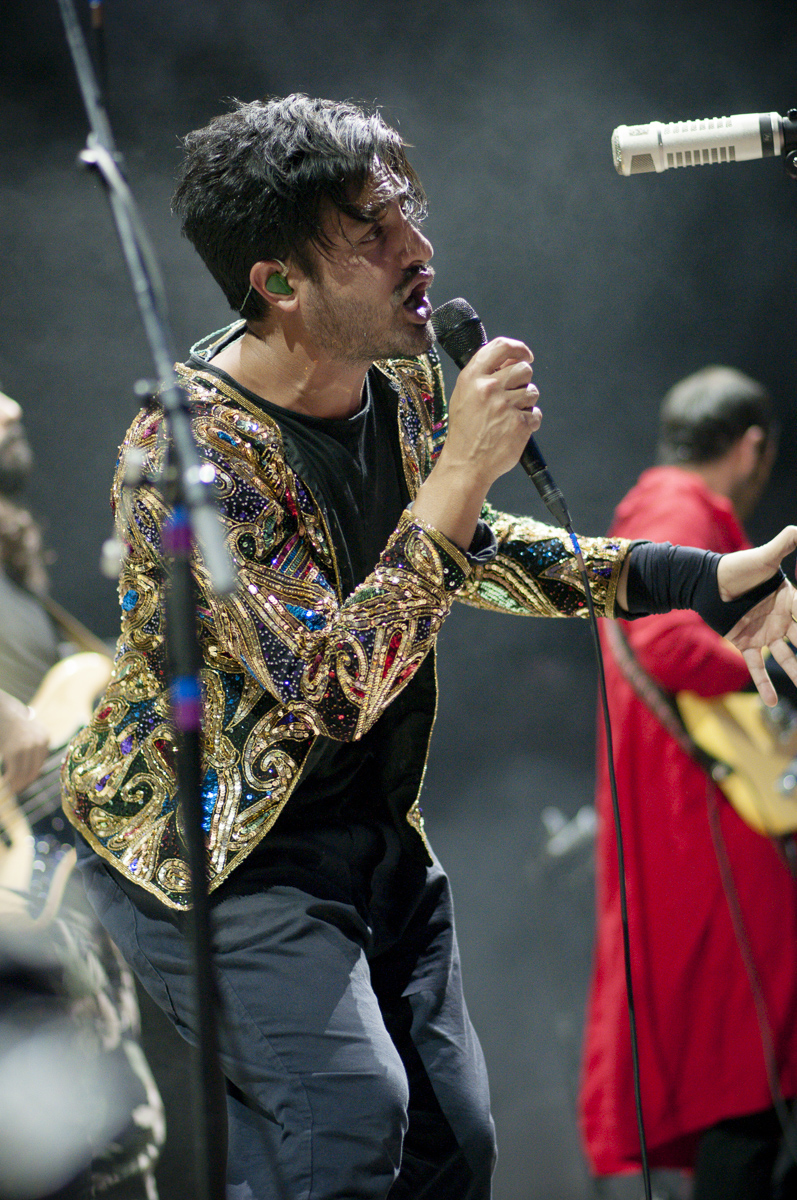 By the time Young the Giant entered the arena of bands, the sky had melted from a pink haze into an inky black night. They began their set with the beautiful and gentle song “Firelight.” Lights from phones streamed out across the crowd while bodies drifted back and forth to singer Sameer Gadhia’s smooth voice, “I don’t believe you / I’m in a parachute / Falling in deep / Sleep / Out of control / Can you feel it?” The melody shifted from a questioning, introspective tone to a hopeful twinkle of answers.

They then dove into the glam rock we are used to hearing from the lively band, while maintaining an inner strength behind their lyrics. “It’s About Time,” “Titus” and “Mind Over Matter” streamed out with prancing lights and heavy strikes of the drum. Their new song “Amerika” was also given to us fanatic fans. Dominant synth chords and pop-rock displacement floated into the air. Gadhia once again placed truth into his lyrics that millennial find so easy to connect with. “In Amerika / It’s the same story / You want glory son / I’ve been looking for so long / But you cut me out.”

Twiddling guitar strums of “Cough Syrup” took over the stage as well, and the crowd was left pleased with the mix of old and new that Young The Giant gave. 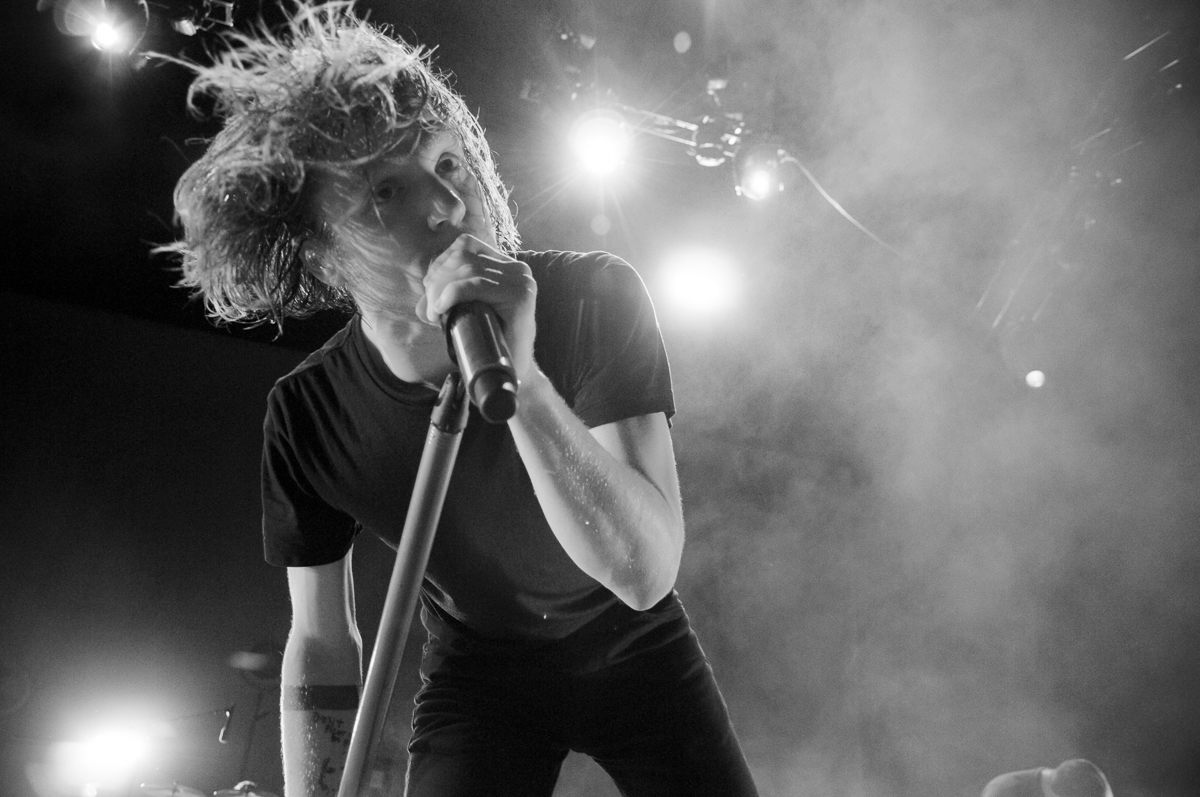 While the night was nearing its end, excitement was bubbling over. Matt Schulz and the rest of the men of Cage the Elephant exploded onto the scene, quickly picking up the musical pace where Young the Giant had left. Schulz was traipsing all over — crouching down over the crowd, jumping around the musicians, parading his unique voice into the microphone. Their ability to command a large amphitheater was apparent and they stayed connected through their rock jams while discordant lights flashed over the crowd. Hits such as “Trouble,” “Cry Baby,” and “Ain’t No Rest for the Wicked” elegantly rang out, feeding fans their wish list for the night. 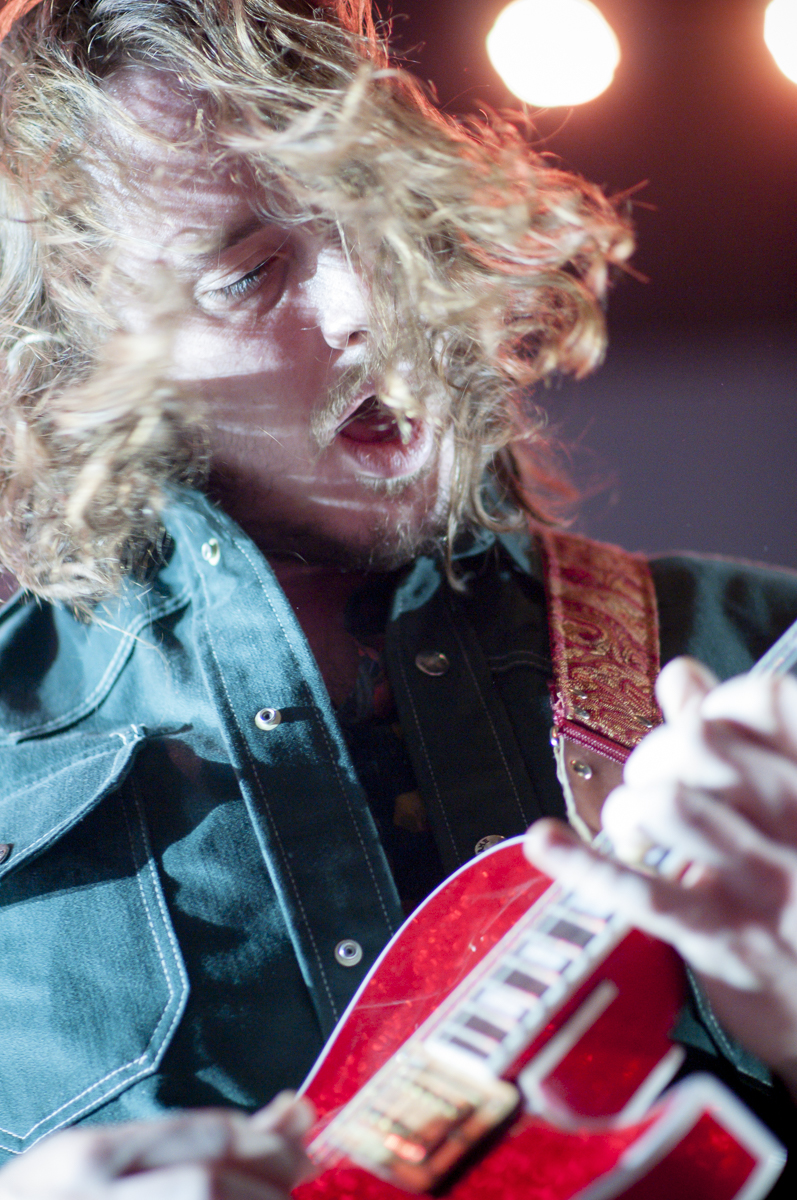 I kept thinking Schulz was a sprite of fury, in the most positive ways of course. His energy was palpable and it bleed into the group’s rhythmic patterns of chaotic songs. They performed songs from their most recent album Tell Me I’m Pretty, such as “Cold, Cold, Cold,” and the band was visibly ecstatic when the crowd echoed back with the lyrics. “Darker in the day than in the dead of night / Cold cold cold cold inside / Doctor can you help me ’cause something don’t feel right / Something don’t feel right.”

Drawing the crowd into the height of the night, we graciously accepted the end was nigh when “Shake Me Down” and “Closer” flooded into the air. But don’t be bummed that Big Gig is over — it shall be back. If you want to relive the night (or pretend you were there), 303 Magazine created this playlist specifically for you. So burst out your moves one last time and make sure to come around for Big Gig in 2017.