13 Bloody Mary’s to Curb Your Headache

If you’re looking to build a healthy buzz before noon, this list of Denver’s Best Bloody Mary’s is liable to jazz you up. Featuring our categorical favorites of Denver, we’ve loaded a wide variety of these morning sippers—fresh takes on an old habit, if you will. In our humble opinion, Bloodies nurse you back to health in the most dire of dawns, so file away this compilation of cool down cocktails for weekend reference. 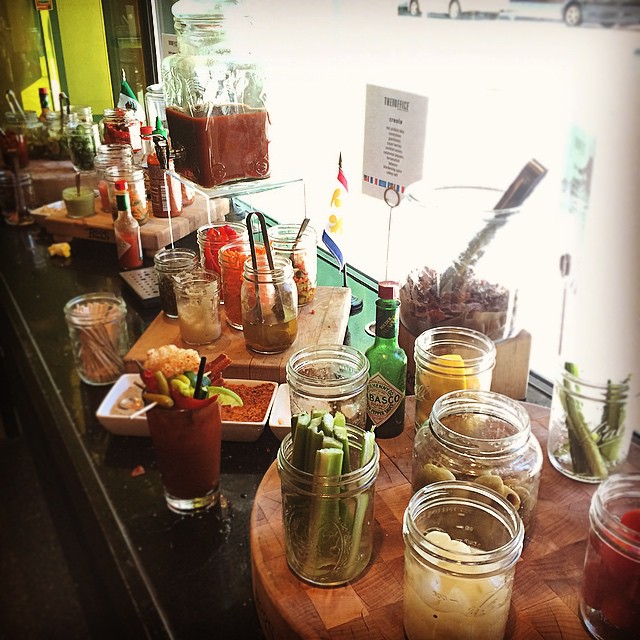 With a staggering array of toppings, the Corner Office’s “Bell Bottomless Dy-No-Mite Bloody Mary Bar” is our go to stop for endless libations. The garnish options can be a meal in their own with pork belly, shrimp, shoestring fries, pickled eggplant and more. For $15 bucks, this behemoth of a Bloody Mary bar is all yours. If you can eat anything afterwards, kudos to you. 1401 Curtis St. 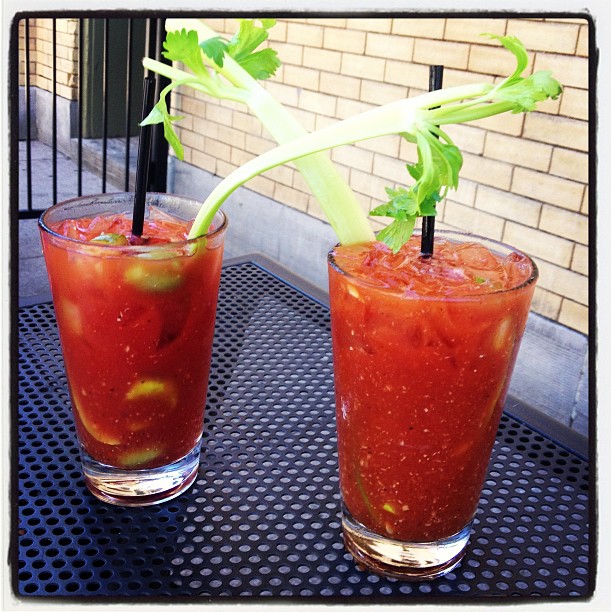 We’re aware that the whole concept of an autonomous alcoholic beverage station is a rather daunting scheme for some patrons, but we can vouch that the Hornet is a stable beta tester. At $2 a pop, your server totes out a generous pour of vodka and ice, then leaves you to your own devices. It’s a mad, mad world we live in and build-your-own Bloody Mary bars are one of our greatest treasures. With a slew of hot sauces, Worcestershire, horseradish, peppers, veggies, cheese, spices, and various blends of Bloody Mary mix, you can flood the bathtub or kick it plain and simple. 76 Broadway 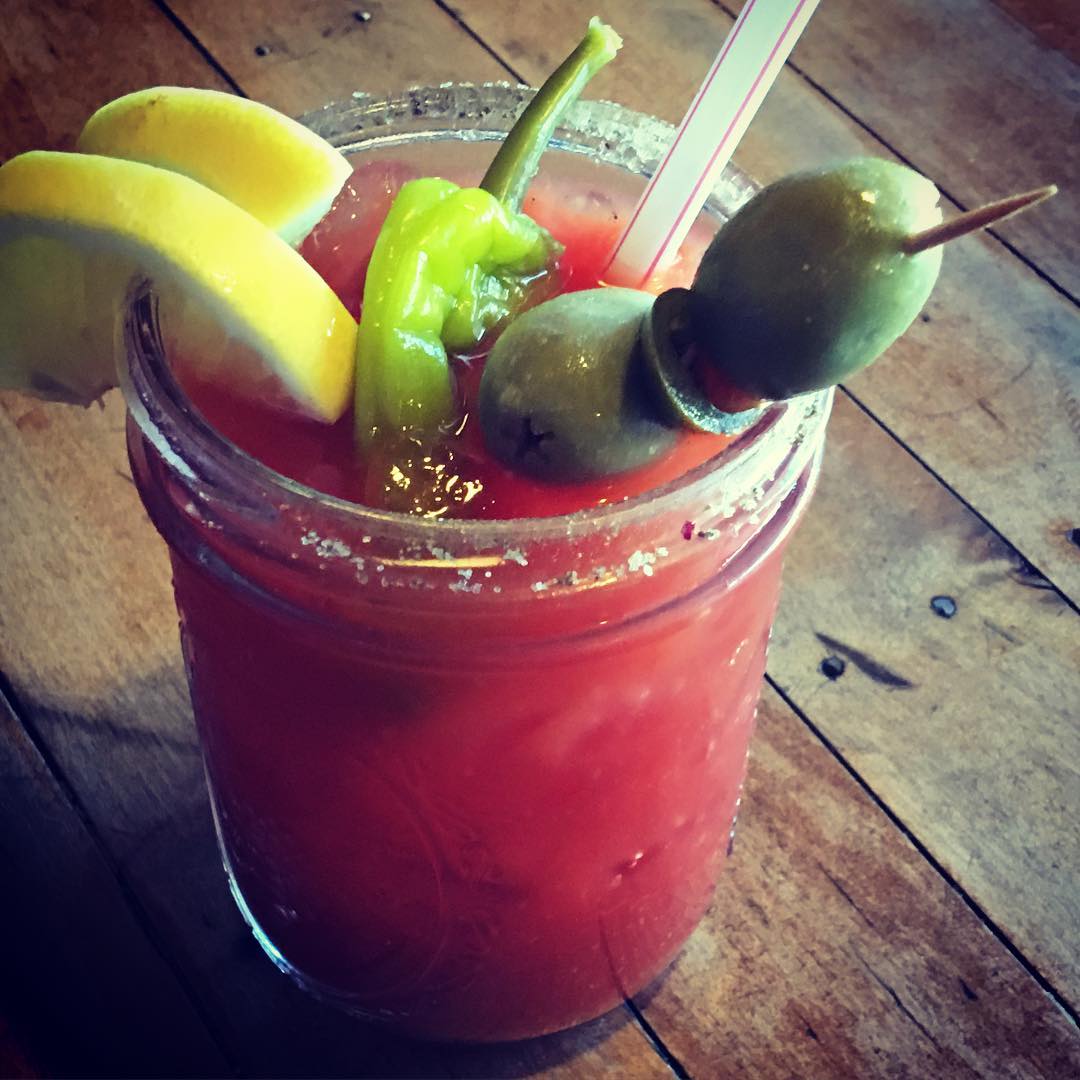 We’ve been showing some serious love for Devil’s Food’s wakeup cuisine as of late, but this list wouldn’t be complete without their Bloody Mary sculpted absolutely from scratch. The first thing you’ll notice about sipping from their mason jar is the pulp that chugs through the fat straw—that’s because they pulverize the tomatoes themselves in the backroom. This is the old school Bloody Mary you’d drink if you were a pilgrim. The bar program takes it one step further by mixing with jalapeño-infused vodka. Be warned: it’ll light you up physically and figuratively. 1020 S. Gaylord St. 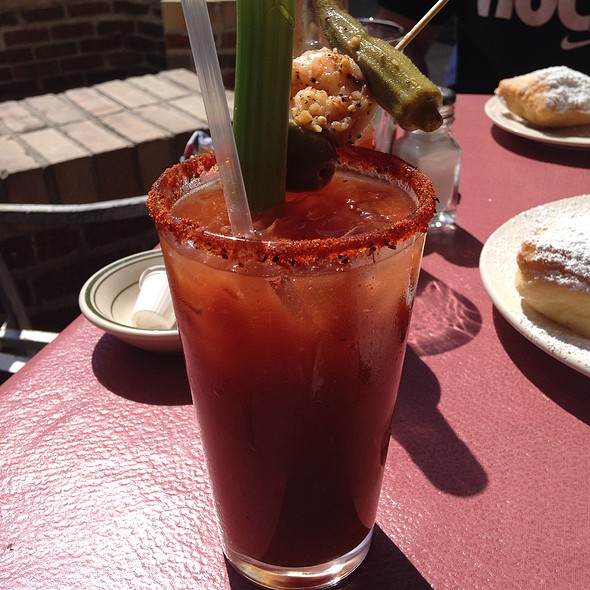 Inevitably, the creole kings and queens at Lucile’s rule this category. While the drink isn’t as ragin’ Cajun as one might expect, this Bloody is garnished with okra, celery, olive and a single shrimp to cover the seafood department. Lucille’s also happens to be a mutually exclusive brand of Bloody Mary mix. Coincidence? We think not. Multiple locations. 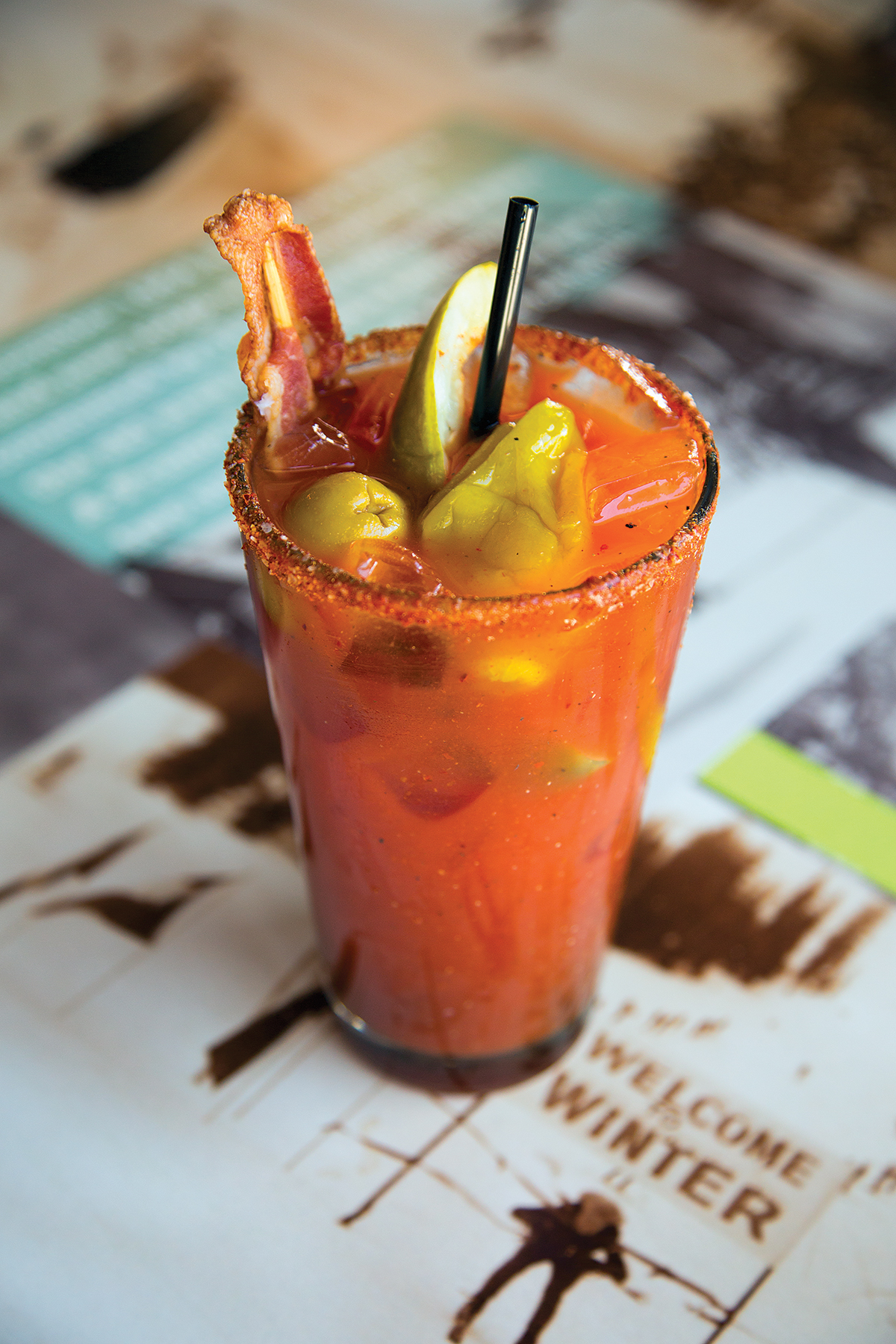 Damn straight, 6th Alley Bar and Grill at A Basin was selected as Summit County’s Best Bloody Mary again last year with their bacon-infused vodka at the helm of the après cocktail game. Not only does 6th Alley vodka hint at bacon, but the bartenders simultaneously plunge a hog wild strip of bacon, a pickle and a pepperoncini into the belly of the beast. The draft roster may be remarkably diverse, but you can’t pass up what is arguably the best Bloody Mary in Summit County. Local’s tip: be brave and order up when the lifts start spinning at 8:30 A.M.

The Red Snapper has been satiating Sunday mornings since Ophelia’s opened last year. The Red Snapper is the time trusted alternative to Bloody Mary’s with a light spirited name and a spicier spirit in the glass. Using gin in place of vodka, Red Snappers retain the botanical dynamic of gin and reject the enhancements of ingredients like horseradish and Worcestershire. Ophelia’s land way outside of the box for most things, but their Red Snapper is a simple solve for the morning blues. Swing through the notorious gastro-brothel for brunch from 10 a.m. to 2 p.m. on the weekend. 1215 20th St. 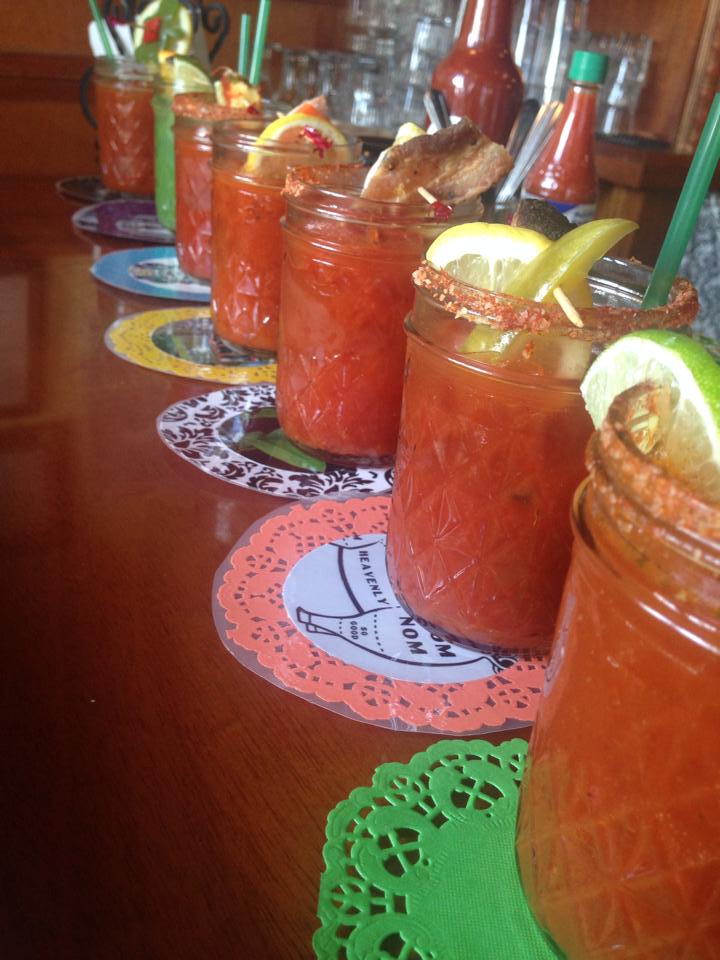 Sassafras has Bloody Marys coming out of their ears. 10 Bloody Mary’s are on their roster every day. Their eponymous Mary steeps Piquillo pepper, tomato and house-made Cajun seasoning in garlic and dill vodka. Enter the inferno with the Marie Laveau: habanero-infused vodka, fire roasted chiles, and house-made ghost chile hot sauce. Their Mary anthology is extensive—so broad that they offer a flight of mini mary’s for Sassafras virgins. Presenting Bloody alternative, they also offer a breed of Micheladas like the Bloody Baron, which combines an American lager with roasted tomatoes, fresh cilantro, and lime. Multiple locations.

While Avanti lets their vendors handle the food and leg work, their bar is on another level. Their Bloody Mary elevates the eyebrows skewering local jerky, “Real Dill” pickle, and Avalanche Farms goat cheese. Do what you please with the ingredients—dunk, splash, spread, dry—because the Bloody speaks for itself. The garnishes plank across the top of the glass, while the main attraction remains relatively unscathed. Avanti pays homage to the homegrown goodness of Colorado with their toppings—snaps for that. 3200 Pecos St. 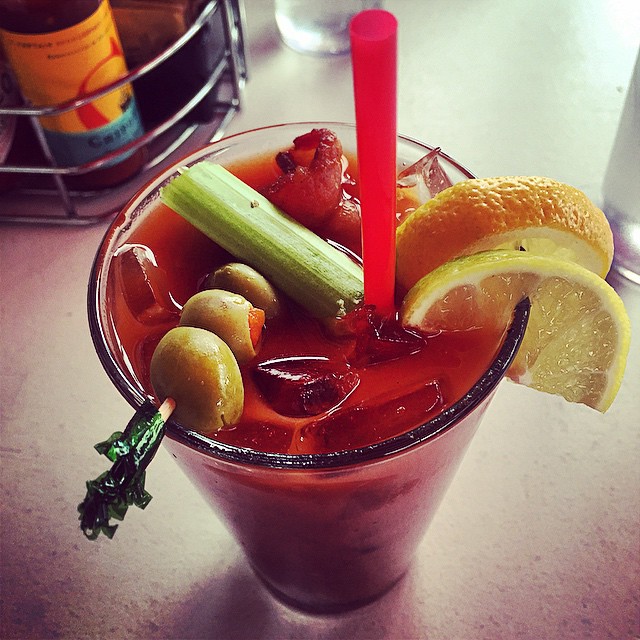 It’s one thing to break even by readjusting your body to functioning level with a single porch sipper, but it’s an entirely other realm to ride the bottomless caravan at brunch. Maddie’s slings Bloody Mary’s until the cows come home for only $8. Staffed with funky mixers, this restaurant winds up your morning with jam bands and good drinks speared with olives, pepperoncini, and a thick slice of bacon. The menu has Israeli roots, so make sure to order lox, challah, latkes, or schnitzel to brace the endless cocktail experience. 2423 S. Downing St. 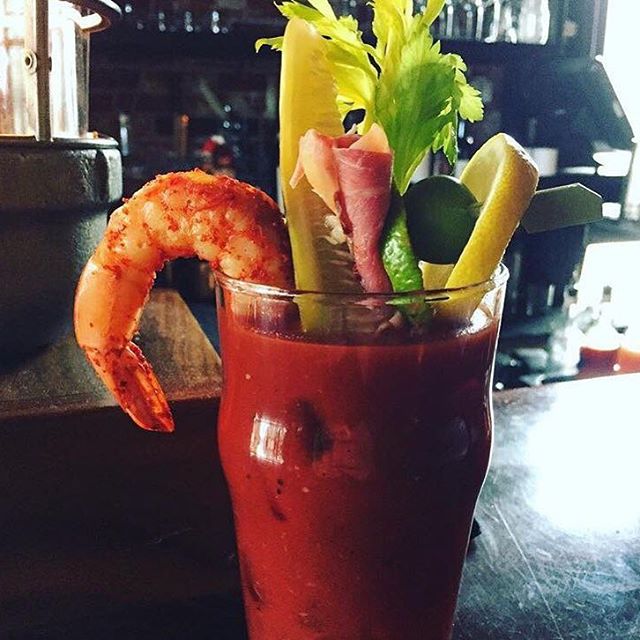 Drink up and be merry in the morning with Old Major’s royal brunch. Chef Justin Brunson coaches a stellar big three lineup of Bloody Mary starting things off with Spring 44 Vodka and a top secret spice recipe likely locked in a vault somewhere. The Butcher hauls out the house cured ham, The Monger rocks poached shrimp, and The Farmer sticks to pickle and celery. These Bloodies don’t have to vie for anybody’s favor—they’re all winners. 3316 Tejon St. 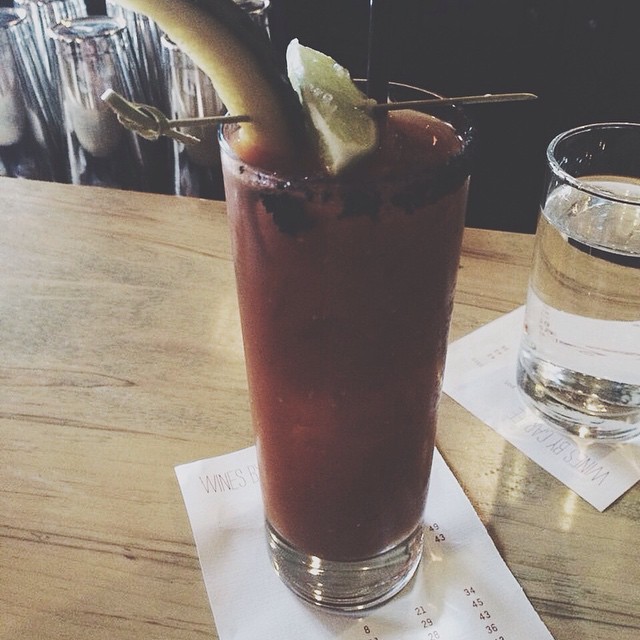 Beast + Bottle’s Bloody menu has some funky key changes. The Come On Aileen combines green onions with habanero vodka. Their spirit switch-ups are also rather exciting, offering cucumber gin, mesquite wood bourbon, and lustau fino sherry all as bases for your Bloody Mary. These guys have the day drinking groove down to a science with great deviations from the norm. 719 E. 17th Ave. 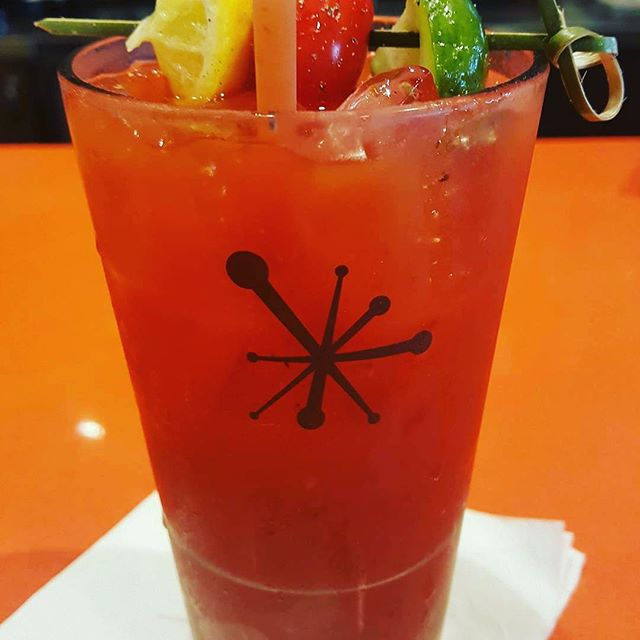 The Gazpacho Bloody at Snooze tones down the horror story red drink to a mellow yellow. It runs cucumber, pepper and garlic infused vodka, and house bloody mix. The Mary is not entirely green, but if you order enough, you might start to see what we mean. Snooze also prepares a Bloody with Breckenridge bourbon and then another with cilantro, fish sauce, basil and Sriracha called the Bangkok.  Raise your glass high ne’er-do-wells. Multiple locations. 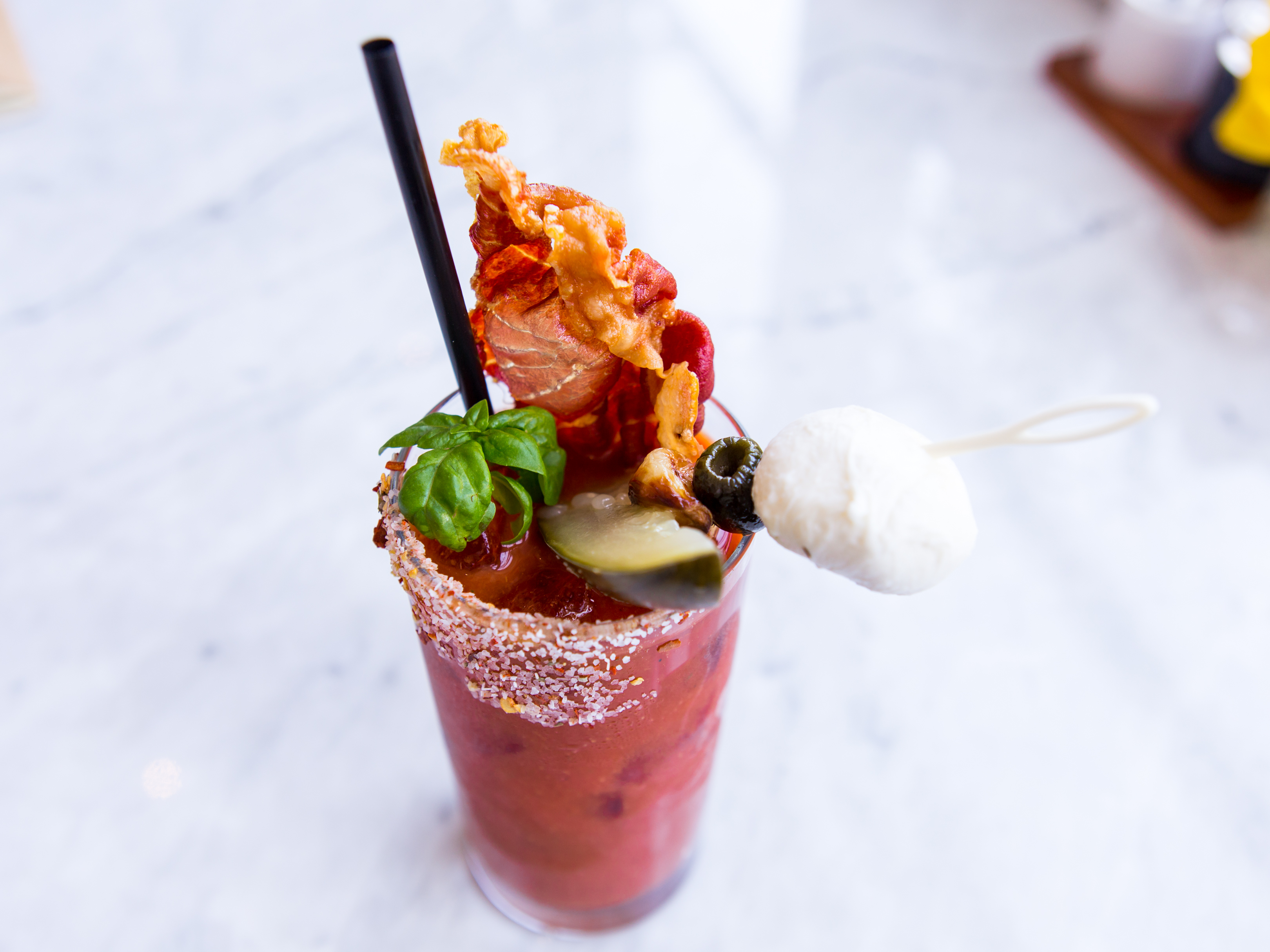 Sarto’s Social Italian Eatery hones one of the most elegant Bloody Mary’s on the market. Topped with decorative garnishes the drink winds up looking like the Rockefeller Christmas Tree by the time it reaches your table. This seasoned beauty is a phenomenal kickstarter to a lethargic weekend morning cooling you down and bringing you back to life. 2900 W. 25th St.