10 Unique Things to do in Denver this Weekend

Tyler HarveyApril 14, 2016
The Real Dill is hosting a release party for their next big-pickle this Friday. Photo Courtesy: The Real Dill on Facebook
Home
303 Magazine
15 min read

It’s quite an anticipatory week living in a legalized state with 420 coming up. As excited as you may be, don’t be distracted from the ecstatic weekend ahead of us. Friday and Saturday present us with beer-inspired events with the opportunity to pair the crafts with either bacon or pickles. It may not be First Friday, but art enthusiasts will be pleased with the amount of gallery and cultural events planned this weekend, including a unique opening at Artwork Network. If music is your niche, there’s an enormous variety things to do from attending free concerts to skimming through exclusive vinyl releases. Whatever your preference, 303 Magazine has you covered with our guide to Denver’s weekend. 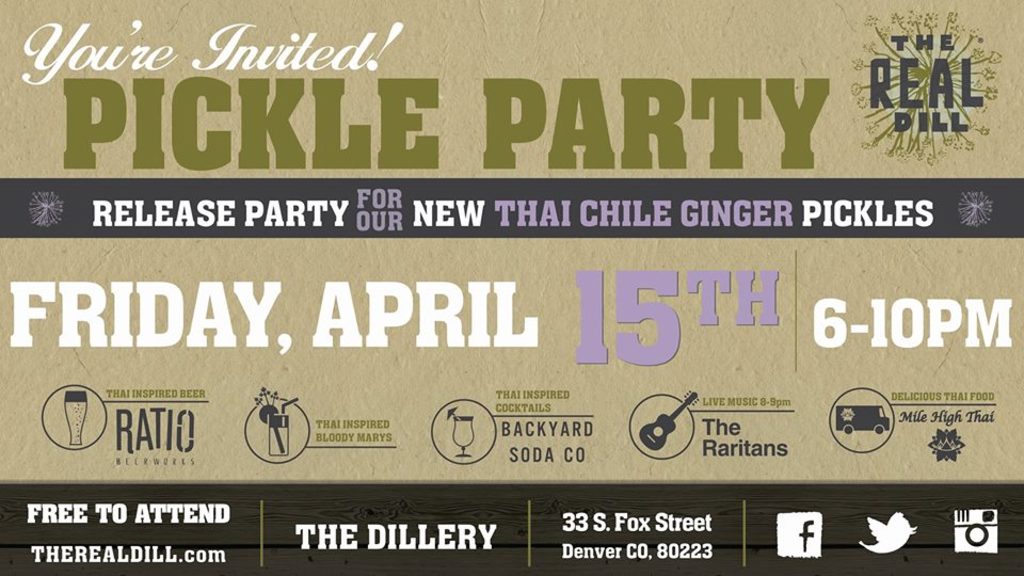 The Low Down: Free drinks, pickles and a Thai-inspired brew from Ratio Beerworks–it does’t get much more appealing than that. Celebrate the release of a pickle three years in the making–The Real Dill’s Thai Chile Ginger Pickle. Though free sounds appealing, try your best to gather some pocket change together, because all proceeds benefit Denver nonprofit Re:Vision. Milehighthai Food Truck will be parked on premise with Denver blues band The Raritans performing. If you can’t make the event, be sure to grab a jar of the pickles when they hit shelves next week. 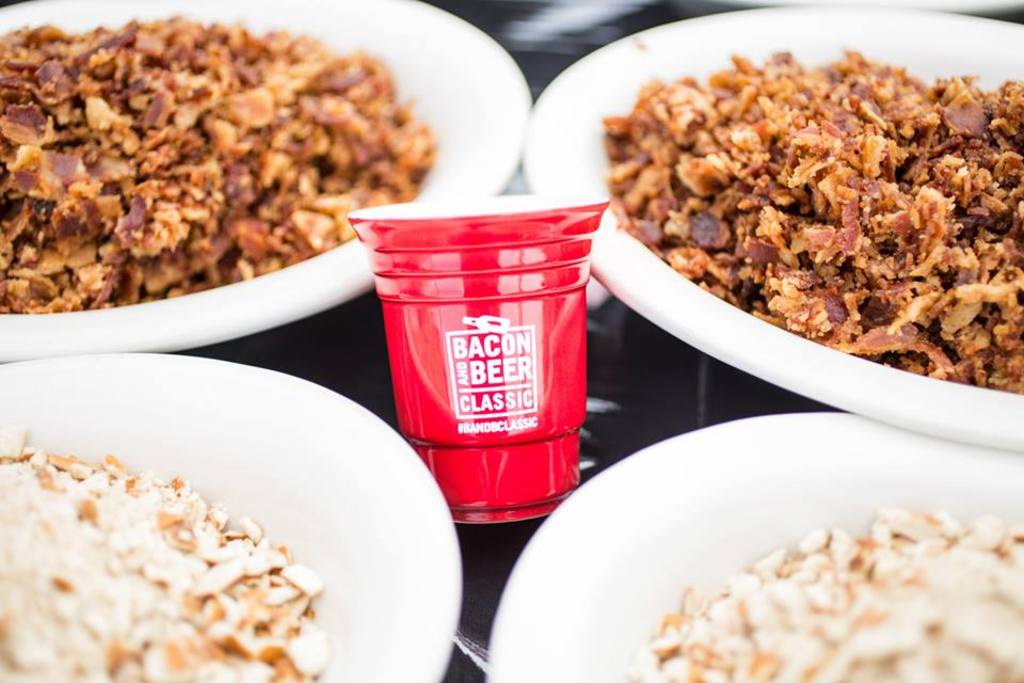 The Low Down: Arguably the best food-and-drink pairing takes center stage at Sports Authority Field on Saturday. The Bacon and Beer Classic makes its debut in Denver with more than 30+ bacon-infused products created by Colorado restaurants and chefs. Enroll yourself in the bacon eating contest, compete in some life-size Jenga and vote on your favorite bacon-infused cuisine. 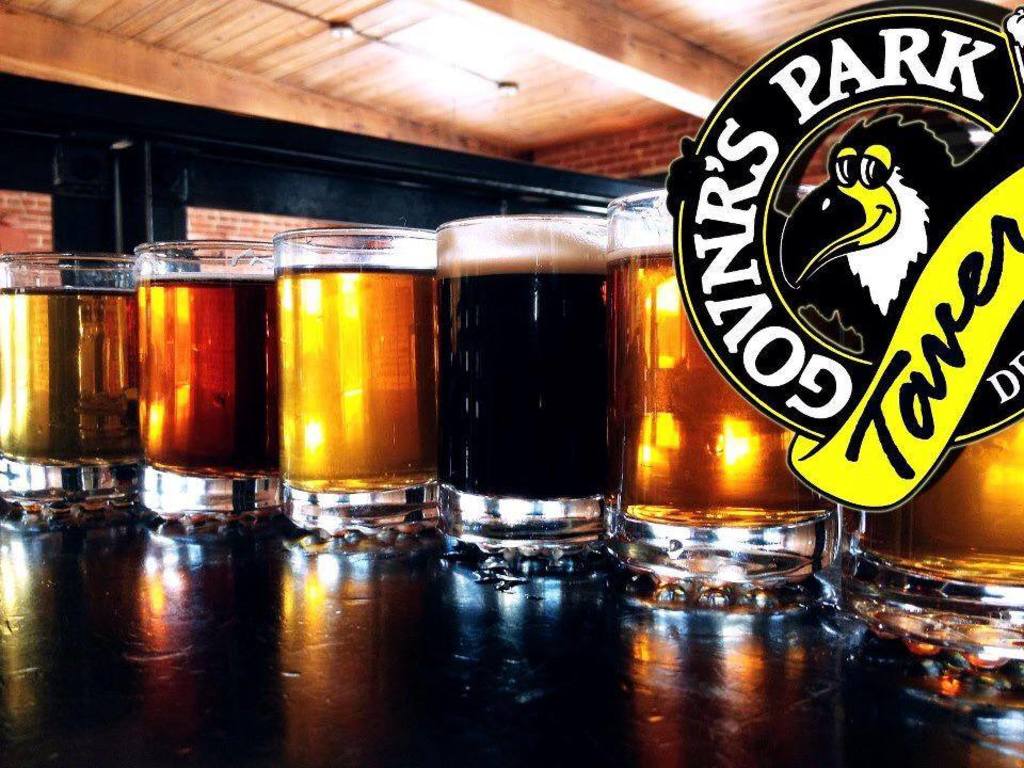 The Low Down: Boasting more than 100 beers to sample, Govnr’s Park Tavern celebrates its 7th Annual Beer Fest this Sunday. Raffles and giveaways highlight the event, as well as a final vote to decide what beer Denver’s favorite neighborhood bar will keep on draft all year. Be sure to grab tickets soon as they’re expected to sell fast. Proceeds benefit the Capitol Hill United Neighborhoods. 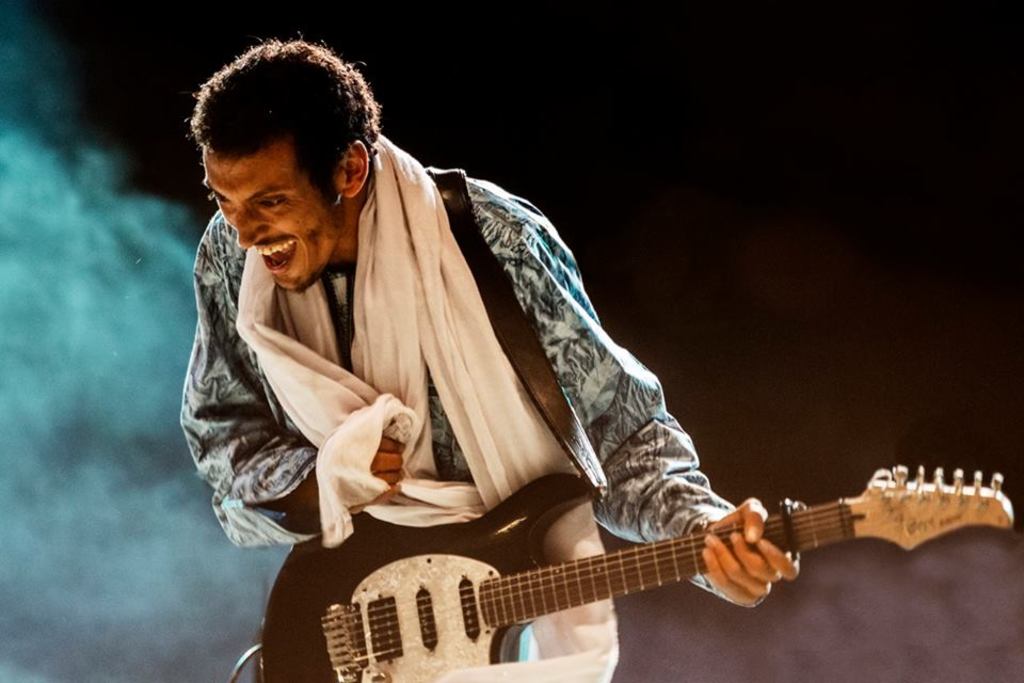 The Low Down: Described as the sound of the Sahara’s next generation, Bombino takes the stage Friday night at the Bluebird Theater. Influenced by legends like Jimi Hendrix, Omara Moctar is a one-of-a-kind artist. Bombino has emerged with an electrifying sound that captures resilience and rebellion. This Tuareg guitarist is known for his unique musical skills in blues and rock. If impressive guitar riffs are your thing, Bombino is worthy of your time. 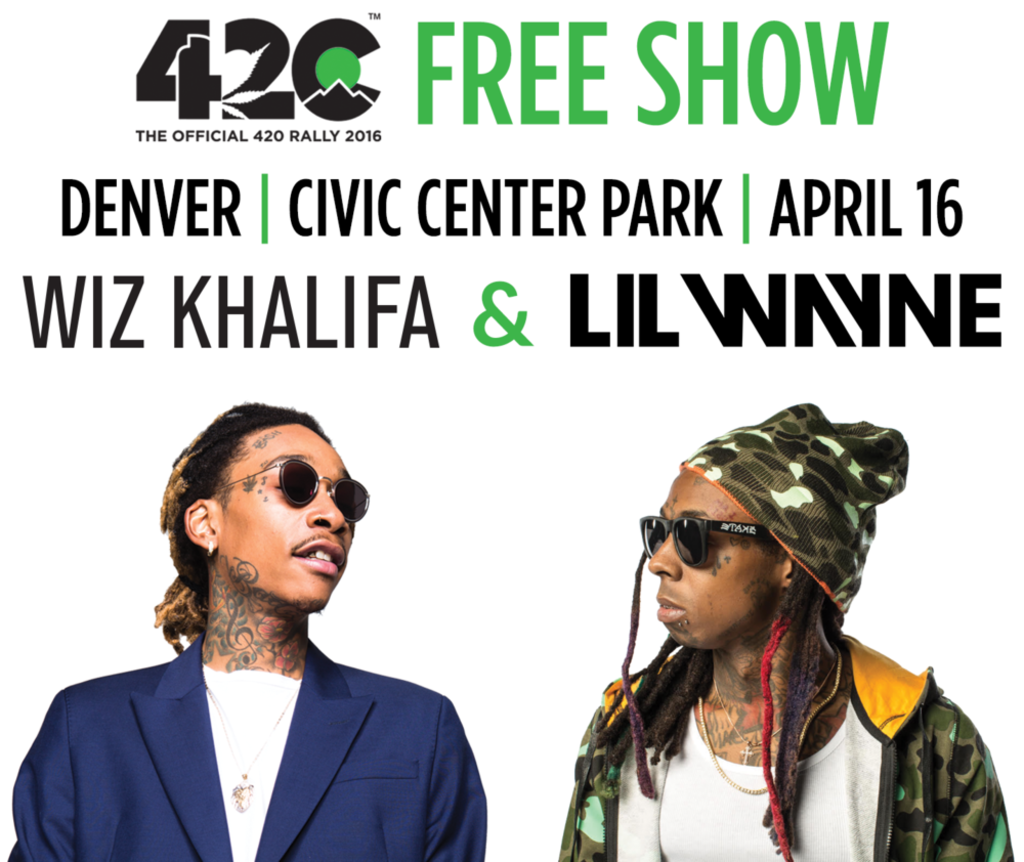 The Low Down: The worlds largest 420 marijuana rally returns this week, celebrating legalization in Colorado. Lil Wayne and Wiz Khalifa perform a free show at Civic Center Park, but if you want to guarantee your place in the crowd, reserve a ticket for park access or buy a ticket package. Take this opportunity to celebrate 420 on 416 in addition to the actual holiday–no one ever complained about a free opportunity for an extra day to partake in the festivities. With more than 100,000 attendees and 250 vendors, Saturday will be a big day for downtown Denver.

Photo Courtesy: The Pancakes and Booze Art Show on Facebook

The Low Down: Taking over City Hall Amphitheater after an exciting and successful Denver Fashion Weekend is Denver’s largest underground art show—where there will be free pancakes. DJs, burlesque and booze will be featured alongside the syrupy breakfast favorites. With more than 75 emerging artists and a variety of mixed media to please everyone, this unique art show sounds can’t be missed. 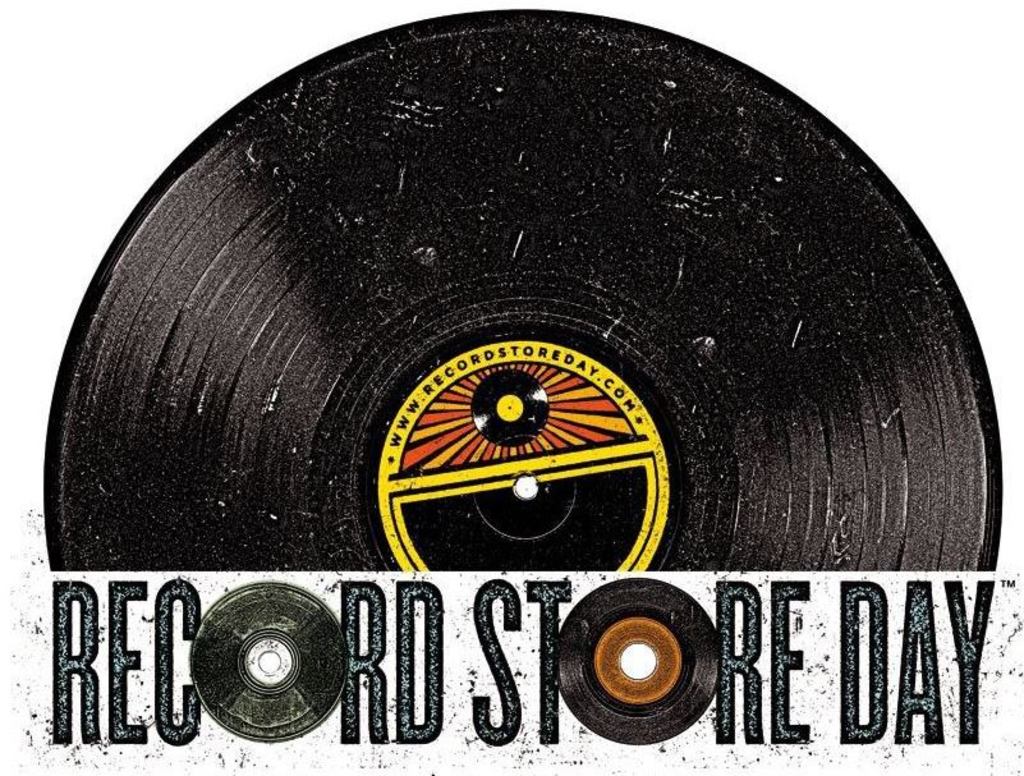 The Low Down: In 2007 something began that grew into an incredibly successful yearly event for vinyl enthusiasts—Record Store Day. Celebrating the culture of music and vinyl as well as local record stores, the big day is this Saturday. Releasing new records that have never been printed on vinyl before as well as reprinting old vinyl, hundreds of albums are available this weekend—if you’re willing to get up early and camp outside of your favorite record store. A full list of releases can be found here.

The Low Down: Opening on Friday night is a gallery of new prints by Colorado’s own Android Jones. These prints are an addition to Jones’ digital collection of deities inspired by Vedic Mythology. Psychedelic and spiritual are just a few of the artist’s traits, often provoking the imagination and playing with perception. 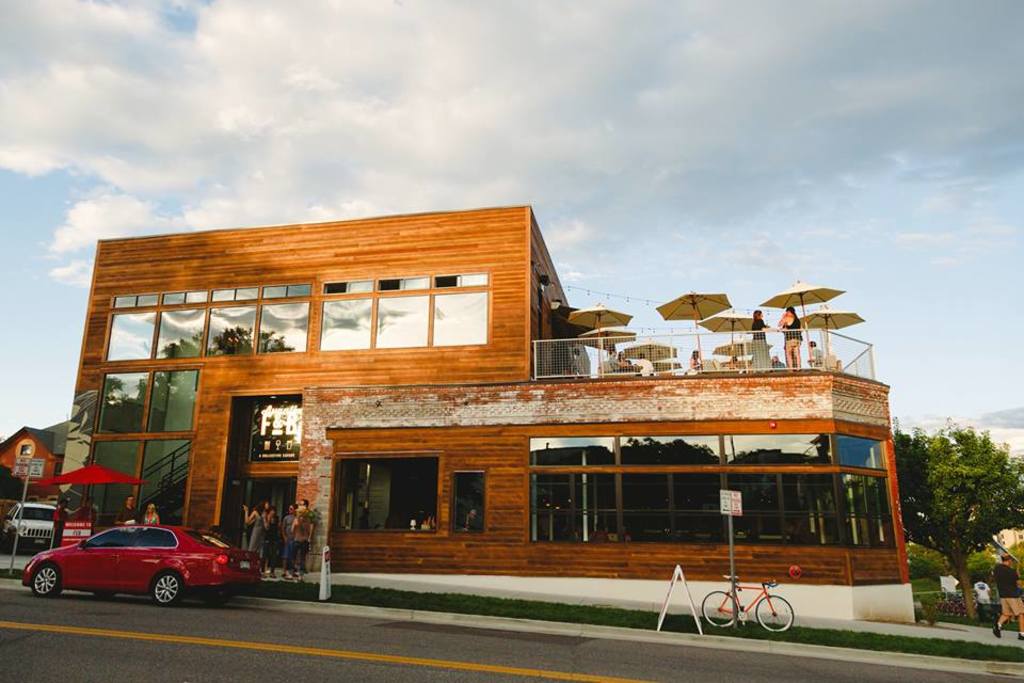 The Low Down: Sponsored by Dogfish Head Beer, Avanti is celebrating Record Store Day with a unique event this Saturday. After picking up some new vinyl at your favorite local record store, bring it by Avanti where they’ll be playing everyones favorite records all day. Dogfish Head will also be pouring some of their favorite vintage brews as well as a brand new craft just for the special day–Beer To Drink Music To.

Where: The Savoy at Curtis Park, 2700 Arapahoe St., Denver

The Low Down: Influenced by hip hop culture and streetwear comes the first-ever Denver Urban Arts Showcase. Featuring a dance competition, a DJ and most importantly a unique fashion show, the showcase  hopes to create an old school experience at the Savoy on Saturday. The showcase began in NYC and will be making its first stop on tour right here in Denver.

Rumpus in the Park