Method Man and Redman Sell out 420 Eve on the Rocks

In case you missed it, the ultimate 420 pregame party was held at Red Rocks this year and the lineup was just about as terrific as it can get. Headlined by the legendary stoners Redman and Method Man,  special guests included appearances from fellow Wu-tang Clan members Raekwon and Ghostface Killah.  If that epic headliners were still not enough motivation, the rest of the lineup had some amazing acts as well including Joey Bada$$, Dizzy Wright, The Underachievers, Jarren Benton and Whiskey Blanket. Non hip-hop fans were still included with tremendous reggae sets from Stick Figure and Collie Buddz on the ticket.

Next out were The Underachievers, a Brooklyn-based rap duo who represent a cultural movement called indgoism. The energetic and spitfire rhymes of The Underachievers can be too much for some listener’s ears, but the ones who can understand the deep spiritual meaning behind their movement enjoy their unique brand of music and there were a lot of those people in the crowd on Tuesday.  The forty minute set was well done and energetic, with highlights of the set being when they played the 4/20 themed “Herb Shuttles” and “Luam,” which nearly put the entire amphitheater into a frenzy. 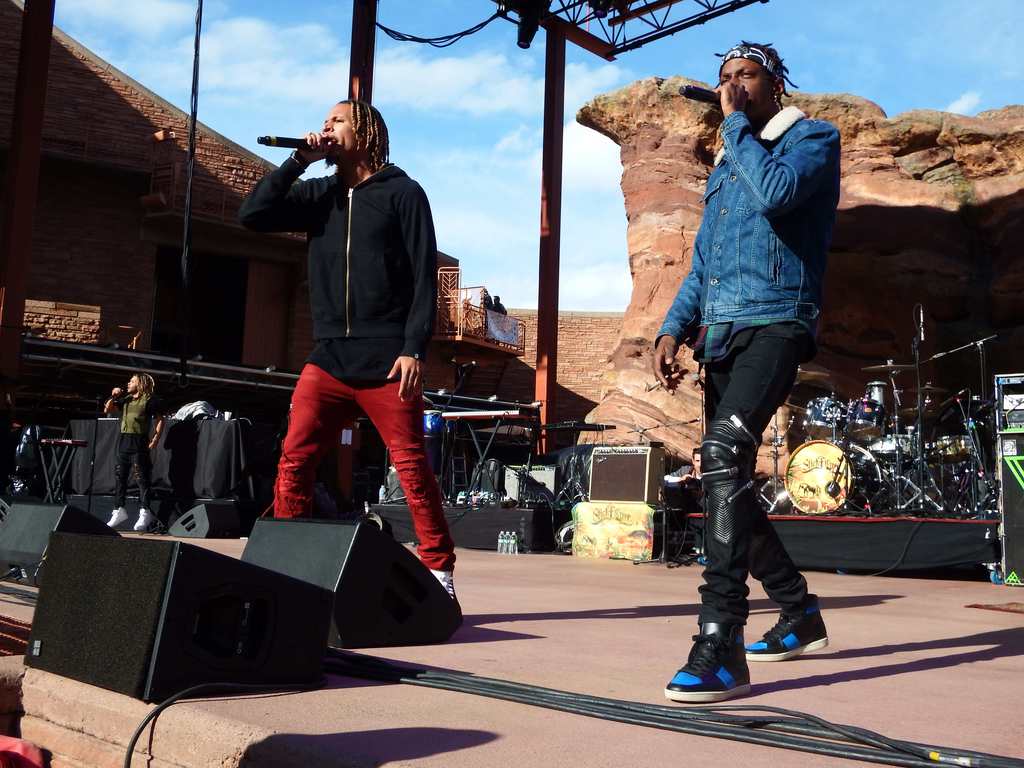 After a shot intermission, DJ hoppa hit the stage and prepared to introduce Dizzy Wright.  After playing a few warm up tracks for the crowd, Dizzy hit the stage to the sound of roaring fans excited to see the extremely pot friendly rapper.  The set list included songs from his latest album The Growing Process like “Plotting,” and the banger of the night “Floyd Money Mayweather.” Dizzy made sure to also add in some classic songs like “Can’t Trust Em “and “The Flavor,” which the crowd responded to with pure energy. Fans of Funk Volume also got their wish granted when Dizzy invited Jarren Benton back onto the stage to perform their collaborative single “Hotel Stripper”. 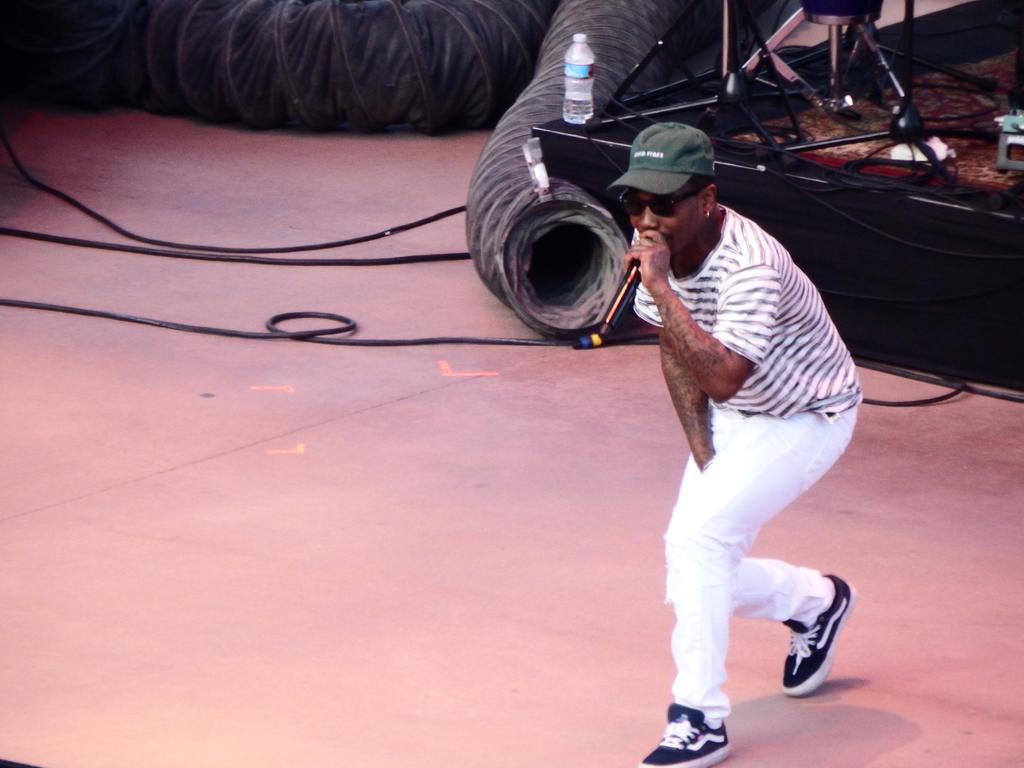 Finally, the Reggae part of the night was set to begin and Stick figure was welcomed out to the stage accompanied by the band’s canine mascot,  Cocoa The Tour Dog. Highlights from the set included songs from their latest album Set in Stone, like “Shadow” and “Fire on the Horizon”, as well as their most popular song “Sound of vibration” from the Burial Ground album. Other high notes from the concert (pun intended), had to be when the band played “Smokin Love” and each chant of “Smokin” was followed by large puffs of smoke.  Reggae fans were in for a surprise when lead singer of Fortunate Youth was introduced and gifted the crowd with a quick verse. 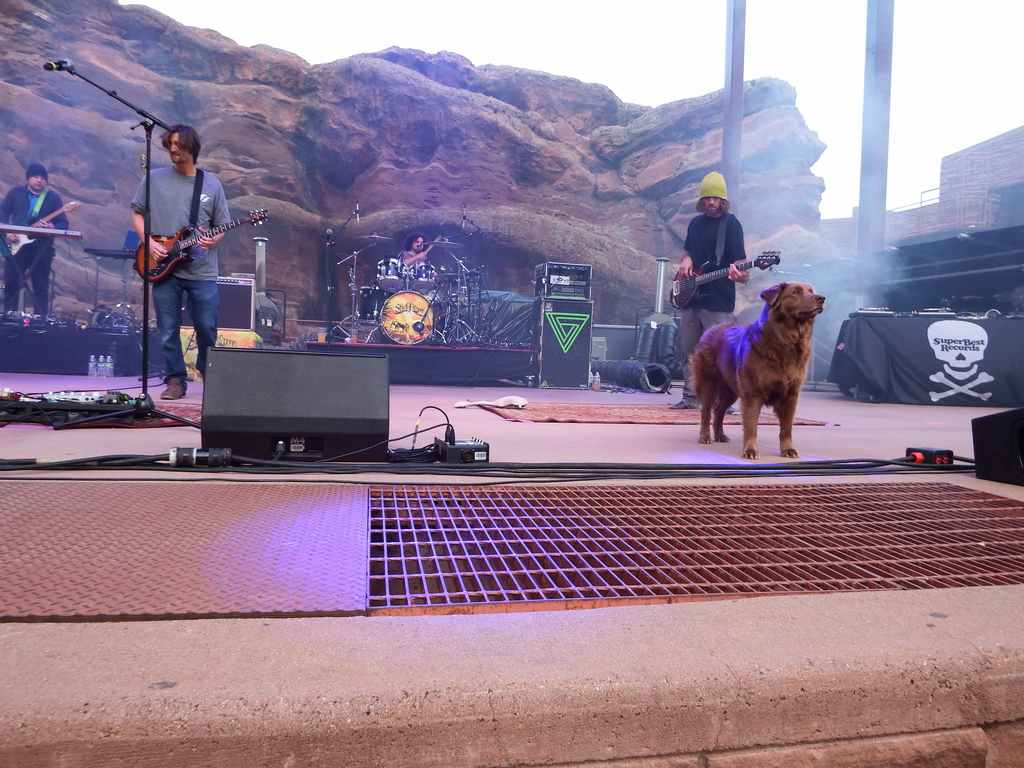 Next out was Joey Bada$$ for one of the best sets of the night. After being introduced by hip-hop royalty in Statik Selektah, Joey hit the stage in front of a sold out Red Rocks Amphitheater that was now completely full of people.  Joey played an array of both old and new songs for the crowd, even played some unreleased music for the extremely excited crowd. After playing “No. 99” And “Hazeus View” from his latest album B4.Da.$$, Joey throw on a couple classics from his debut project 1999. After receiving tons of fan energy for “Waves,” Joey cut the music and asked the crowd to put two fingers in the sky for the greatly missed talent of Capital Steez, just before dropping a touching tribute to Steez called “Like Water”. After the tribute, Joey asked for a moment of silence for his friend and after a short moment for condolences, Joey dropped “Survival Tactics” Steez’s most popular track, and the crowd emphatically sung along to the lyrics of the great emcee who is no longer with us. 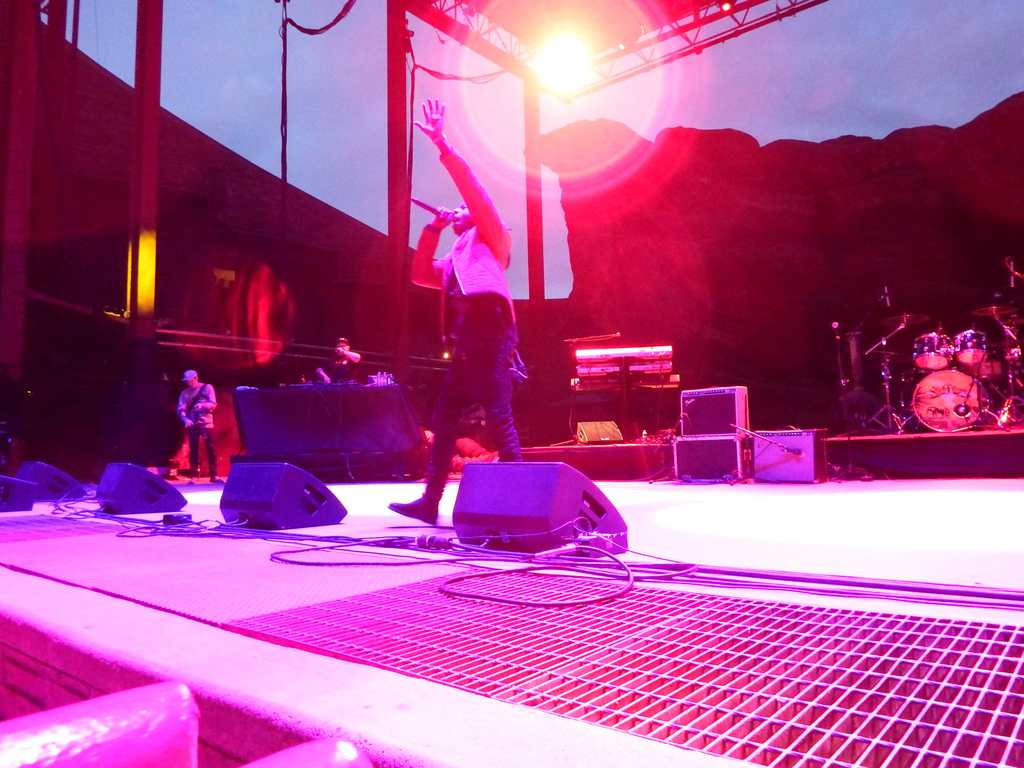 After another short intermission as the crew set up the instruments for Collie Buddz, the sun finally finished dropping and the temperature went right along with it. Complete with the full band, Collie Buddz hit the stage to deliver some of their signature reggae pop sounds.  Buddz made sure to reference the holiday that brought the crowd together and played a ton of 4/20 themed tunes. Songs in the set included the “Sensimillia,” “Come Around,”  “Blind To You” and “Free the Weed”.  The cold was definitely starting to impact some, and people counteracted the freezing temperatures with relentless dancing to the alluring reggae bass lines. 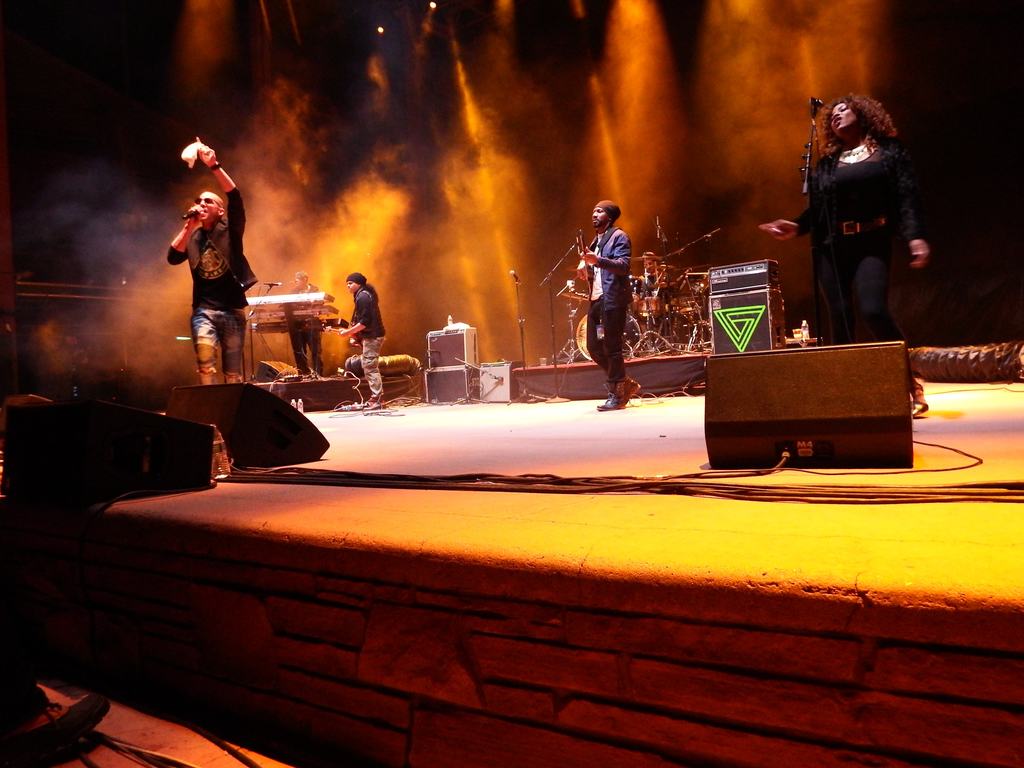 Saving the best for last, it was finally time for the headlining act of Methodman and Redman, with special guests Raekwon and Ghostface Killah. After a short warm up from the duo of DJ’s that had been brought out to the stage, Methodman’s voice emerged from the speaker for a pre-set announcement. After informing the crowd that Ghostface Killah missed his flight and was unable to make the concert, Methodman made note that the energy the crowd produces is the same energy that they will receive during the set.  After bursting out onto the stage full of charisma and some incredible stage presence, Methodman made another announcement a couple songs into the set.

He asked about the policies of Red Rocks VIP seating and then directed the fans to rush the stage saying, “Fuck all this photography and stuff, I’m trying to feel the fans.”  Before the words were even out of his mouth, fans were throwing down the ropes surrounding VIP and rushing into the photo pit of Red Rocks. The duo of emcees played a few hit songs from their extensive solo careers before inviting out the legendary Raekwon to perform some singles of his own. Highlights from the nearly two-hour long set included singles like “Da RockWilder,” “Method Man” and “Pick it Up”. Toward the end of the night, the crowd was asked if they were ready for some Wu-Tang tracks and the thunderous cheer was rewarded with fan favorites like “C.R.E.A.M” and “Wu-Tang Clan Ain’t Nothing to Fuck With.” As the crowd raised their Wu-Tang Ws high into the sky, Methodman and Redman thanked everyone for coming out and informed everyone that Ghostface would still be able to make it to their 4/20 concert at Cervantes on the following day. 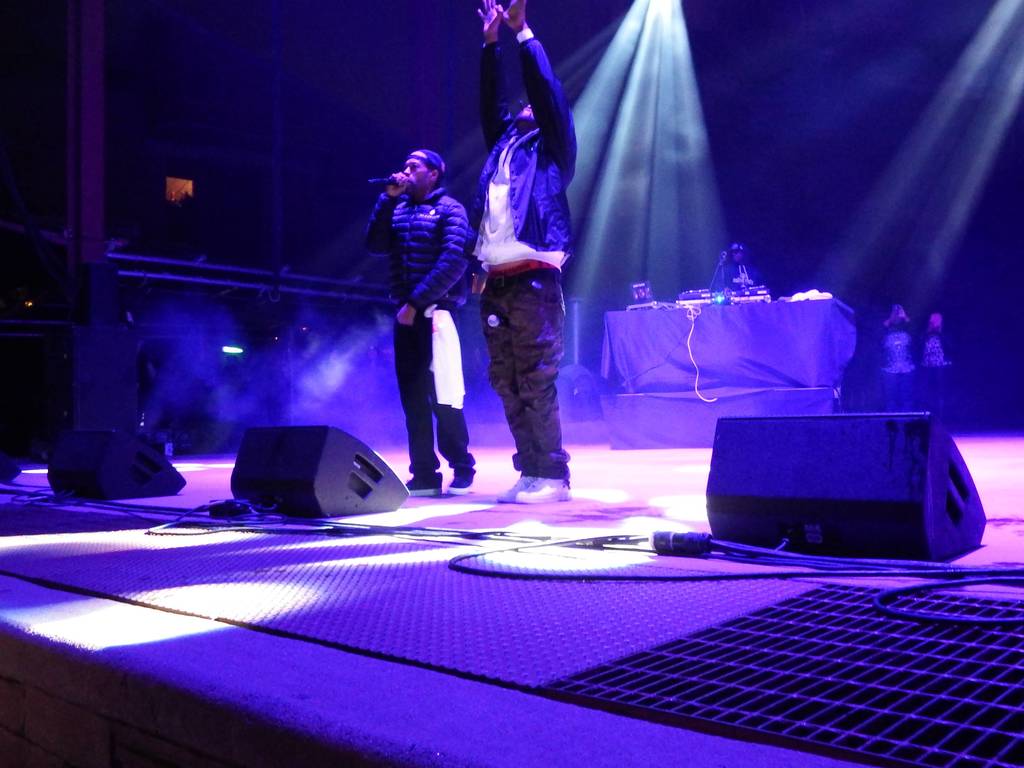 The first ever 420 Eve on The Rocks was a huge success and managed the impressive feat of selling out Red Rocks, which is always exciting for the performers. Denver looks forward to a return of the event next year.