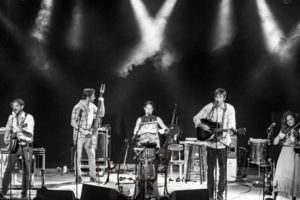 Colorado sweethearts Elephant Revival just returned home from charming the East Coast with their homegrown brand of Americana-bluegrass and they’re throwing us a party. Elephant Revival’s Winter Ball is just around the corner, featuring back-to-back shows at the Ogden on December 4 & 5. They’ve got special guests, new music to debut and unique sets of music each night for our enjoyment. Doors open at 8pm, music starts at 9pm and tickets are still available for $25-30.

303 Magazine got a chance to catch up with fiddle player Bridget Law to ask her a few questions about their East Coast tour, upcoming ventures and, of course, details about their much anticipated hometown Winter Ball.

303 Magazine: You guys just returned from your East Coast Autumn tour. How’d that go? What were some of your favorite East Coast venues?

Bonnie and I were talking yesterday about the idea that, especially in big cities, people aren’t as accustomed to silence, quiet and listening. There are always lots of loud cars driving by and people talking. She was saying that when she goes to sing her acapellas, she uses the quiet and the space and the silence in the room as an instrument. I think we do that when we’re all playing together, as well.

There’s an empty space, almost like presence or peace, that we all kind of try to invoke and use. In a way, it’s like an invitation for the listener or the audience, or all of us really, to kind of get into that space where we’re observing what is greater than any one of us. Something we are all a part of. I feel it and I think it’s something we’ve all grown to appreciate and to incorporate into our music.

There seems to be a sense, on the East Coast or in other busy places, that quiet is less common and therefore more needed. We’re really blessed in Colorado to have such magnificent land to be reverent of: easy access to hiking trails and wilderness, lots of parks and quiet corners. That is something that Coloradans tend to cherish, as do we. Our music tends to be more engaging, providing an inward sense of experience. We use really sensitive elements, without drums or amps. We can’t project over the talking, nor would we want to. We hope you want to hear the lyrics. Conversations tend to divide up the room into small groups, but we want the whole room to experience our music together, united. That’s what we see as the purpose and the medicine. Everyone’s talking about unity right now, you know. Unity and love on a grander scale.

303 Magazine: You’ve been introducing some new songs with the cello. How did that come into play?

Bridget: Bonnie has been learning the cello for the last thirteen years or so. She’s learned the cello through composing, so she has a series of songs that she’s written on the cello. She is now ready to share those, and we’re really excited to invite that in. We’ve been playing one song of her’s, but at the Ogden we’re planning to have a few more where she plays the cello. Our newest member of the band, Charlie, is quite the multi instrumentalist, so he plays cello on a few songs too. It brings about a string section element, kind of layered strings, versus me just playing solos or melodies. And with Bonnie, it opens up yet another one of her tender, gorgeous spaces.

303 Magazine: Elephant Revival is playing the Envision Festival this February down in Costa Rica with Shpongle, Beats Antique and Random Rab. Your music is obviously very different than a lot of the other headliners and electronic music at this event. Where do you guys fit in and what are you looking forward to bringing to the table? 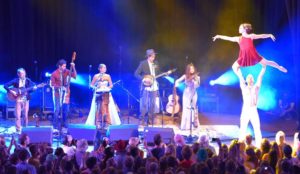 Bridget: They reached out to us because they had a lot of requests for what they were calling “instrumentalists,” some more collaborative and acoustic music. I’m pretty tight with some of the “sister festivals” to Envision, so I’m really familiar with the folks who put it on. It’s come up a few times over the last several years that we’d love to make that happen. Plus playing in Costa Rica is super exciting. It seemed like this was the year and it just came together.

We’re looking forward to it! I hope we can find the balance. We can’t be as loud as DJs and stuff so that’ll be a bit interesting. I think it’ll be really nice. Hopefully it’ll kind of ground everybody a little bit and allow the experience to kind of go deeper, in multiple directions.

303 Magazine: I also noticed “Bonnie & Bridget” are listed separately on the Envision poster. What have you ladies got up your sleeves?

Bridget: Probably something similar to what we did this summer at the ARISE Festival, which was a collaborative show with the Fractal Tribe. We played Bonnie’s cello pieces during a half an hour set that was choreographed with Fractal Tribe performers. That show was Saturday night on the main stage; we also did another set where Bonnie played guitar and I played fiddle, or we’d switch it up and she played the saw and I’d play the guitar. One might say we got a little feminine on everyone, and we’re happy to do that. We had fun.

303 Magazine: Tell us about your Winter Ball. You’ve got unique sets of music, special guests and performers. What can we expect from these back-to-back shows? 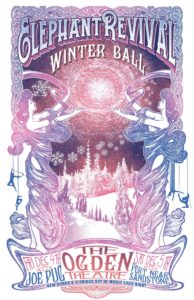 Bridget: We’re going to do two entirely different sets of music both nights at the Ogden. We have so much material. We’re really working on stretching it out and distributing it between two nights, making sure all the energy builds are there. We’re trying to create two very different experiences, digging into the archives and combining it with the new stuff. We’re really branching out and exploring a lot of our repertoire.

We’ve been incorporating a tom-tom drum with our new music, which is pretty fun. We pass around the drum around a bit. There’s a new song where Bonnie is playing cello, melodic cello with the bass, and I didn’t feel it was necessary to play the violin. So I play the drum in that one, and sing.

We are putting a lot of energy into the ambience at this show. We’re going for this really iridescent Winter Ball kind of theme. It’ll be beautiful in there, with the lighting and costumes. It will be a welcoming winter celebration.

The Fractal Tribe have become really good friends of ours in Boulder. Jill Katzenberger and MaQi have inspired Bonnie and I to learn ariel silks over the last fews years, and they’re some of our teachers. They’re really lovely. They’re going to do lyra (aerial hoop), rope and ariel silk. It will be a gentle part of the show. Not super distracting, but integrated into the show. As far as special guests, we’re not totally sure yet… we know Bonnie’s sister will be coming out, Anna Paine. We like to incorporate her when she’s around.

303 Magazine: What is on the horizon for Elephant Revival that you’re the most excited about?

Bridget: We’re going back to Bonnie’s hometown area, kind of North Eastern Oklahoma, for New Years’. It’ll be fun, sort of like a family New Years’ with Bonnie’s folks. And we’re going to get some solar panels on our tour bus, which will make traveling much nicer. We won’t have to run the generator all the time, and we will be taking steps towards being greener. We’re also going on tour with Josh Ritter in January and February on the West Coast and in the Midwest. He’s playing some really beautiful music and we’re happy to get to join him there.

There are really exciting things coming in the spring that I’m not sure I’m supposed to talk about. A lot of this new music we’re playing, we plan on putting together for a new album. There are a lot of things going on in the Colorado area coming in the summer, too. We are excited… and it will all be revealed in time!