What: Made-to-order desserts in a small but imaginative space built for fast service and easy viewing of the shop’s unique, science-based culinary practice.

Over the eight years Ian Kleinman has been experimenting with his catered dessert concept, the Inventing Room, even his happiest customers were disappointed to discover that there was no brick-and-mortar location. The good news is that wait is over as of tomorrow when Kleinman will finally unveil his new space on 2020 Lawrence Avenue, right in the thick of LoDo, with a commanding view of Coors Field. The shop is due to stay open from 12 – 10 p.m. on Halloween; all day long visitors will be invited to sample the shop’s signature nitrogen caramel kettle corn for free and then further explore Kleinman’s zany menu of made-to-order delights that first stimulate the mind, then the body. 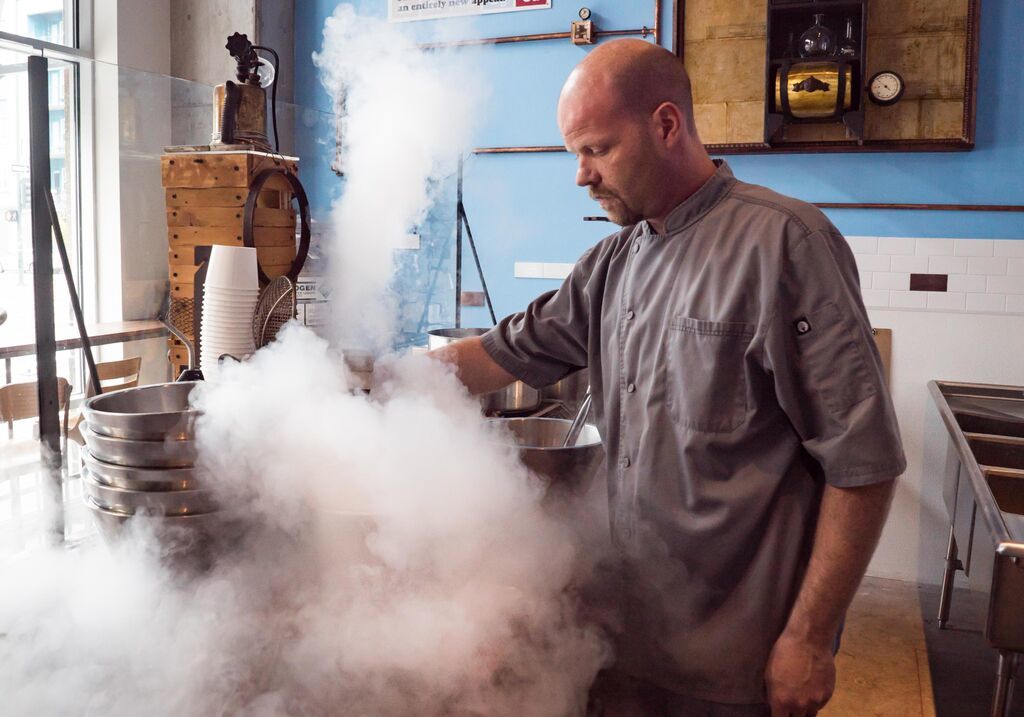 Wrapping his hands around one of the 18 raised schoolroom chairs that line the Inventing Room, Kleinman explains that “finding one of these seats is where the whole idea came from”—to fashion a restaurant model that had entertainment value, and “food that people remember.” Driven mostly by an impulse to leave no stone unturned, Kleinman’s culinary practice bears a fitting resemblance to that of Roald Dahl’s eccentric sweets genius, Willy Wonka. The Denver-based chef encourages this association for obvious reasons: that is, if you’ve read the book or especially if you’ve seen the original film, surely you’ve imagined what it might be like to try an Everlasting Gobstopper or a piece of Three-Course-Dinner Gum, hopefully without having to face the same consequences as Violet Beauregarde.

Unlike his fictional counterpart, however, Kleinman eschews parlor tricks and avoids evasive language when he describes how he creates his dishes. The Inventing Room’s appeal originates from how approachable Kleinman has made the various processes at work in his desserts. In the time he has spent perfecting these methods, Kleinman also developed a special presentation to outline the unique interplay of science and culinary arts that informs his gastronomic niche. Daily, before the shop opens to the public, Kleinman will welcome school groups to partake in his 45-minute food science demonstration, which naturally culminates in some taste testing. “The final [takeaway] we share with them is, just how we’ve used food and science together, combining two things that usually don’t go together is when we really become creative, we make all these cool new products and take things to the next level,” he said.

The Inventing Room will feature a seasonally rotating menu with “favorites [Kleinman] has been practicing on people for the last eight years,” dessert items like a carrot cake ice cream sandwich ($5), which is dunked in nitrogen right before it is handed to the customer to give it that just-out-of-the-freezer texture, grape jelly and rosemary cotton candy ($4) and peanut butter mousse topped with chocolate pop rocks ($5).

Charting unknown territory is a daunting prospect for any artist, so Kleinman was smart to focus on the catering side of his business before settling down anywhere. “It’s such a different concept that I think eight years ago it would have been hard to float just opening it like that. Now we have a great operation that allows us to step back and view the shop as a place to experiment,” he said. “My conundrum is I can’t put an ad in the paper asking for liquid nitrogen chefs. We have to bring the people in and I have to be there to figure out operations, train [cooks] and get everything going. But that’s what is so fun about this: it hasn’t been done before, it’s something new and different,” he said. 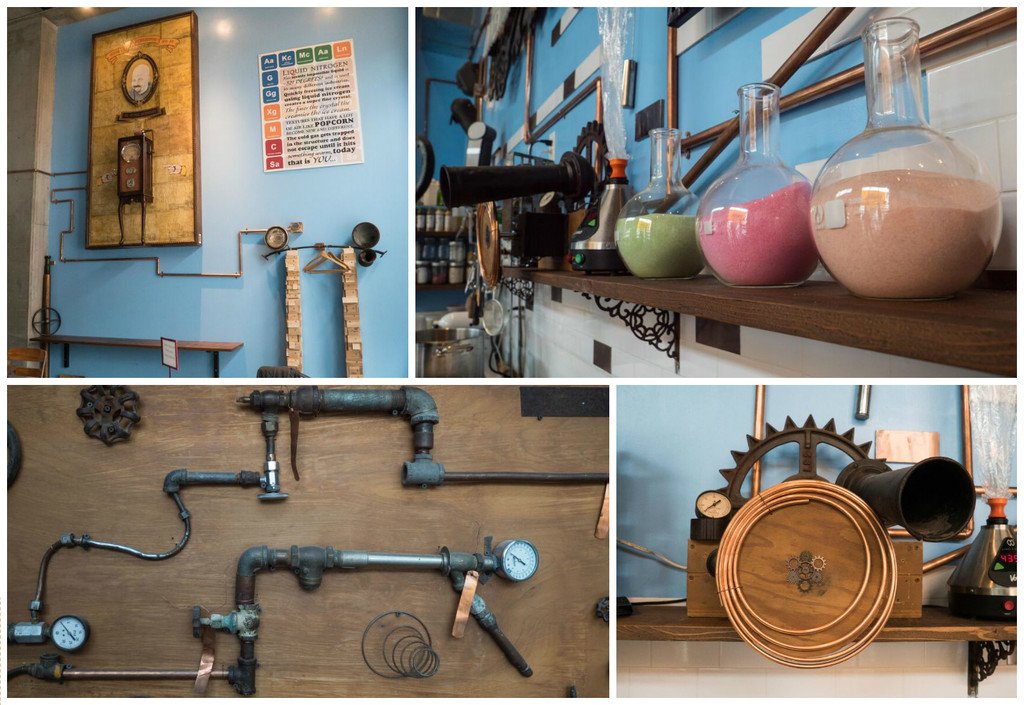 Kleinman achieved the “farm-punk” vibe that he envisioned for the space by assembling scrap materials found on his grandfather’s farm in western Kansas, including the two welding masks that Viktor Kleinman used throughout his life. The smurf blue walls inside complement the eye-catching, bright yellow awning overhanging the facade, as do the bright subway tiles and beaker and test-tube wall-fixtures he fashioned from a Russian chemistry set purchased on eBay. Reclaimed gears from an abandoned printing press down the street dress the corners of the space and a growing array of copper piping and exhaust panels will eventually chuff and whistle along with the rhythms of the nitro chefs on the line.

“I built about 80% of the stuff in here: the art and sign, the sculptures, the glass panels, the typework all over the shop and front counter,” said Kleinman. “It was nice to tap into my artistic and construction side.” Kleinman’s friend Joel Bryant completed the remaining handiwork, most importantly the construction of two sculptures that honor Kleinman’s family legacy and his grandfather’s “love of tinkering.”

While some of these decorations may not have functions beyond fitting the theme of the space, Kleinman’s one-of-a-kind inventions like the nitro keg tap release, and flavored air (which he creates using a Volcano vaporizer), help to solidify the Inventing Room’s place as an arena for oddity and experimentation, rather than just a dessert shop.

In addition to the regular hours the Inventing Room will entertain the general public, Kleinman also has plans to designate the spot for monthly pop-up dinner services known as Gobble Funk. Kleinman’s staff will continue to prep at the co-work artists’ facility the Art Gym (out of which the Inventing Room has been operating for the past few months), but now that the LoDo space is ready to go, his focus is set on introducing his brand to a new round of clientele who have yet to experience the sweet wonders of dessert science.