Of Monsters and Men Captivated Crowd with Light and Dark Tunes 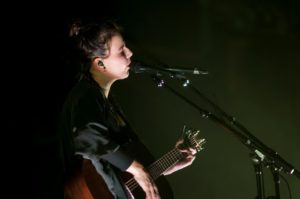 The opening set for Of Monsters and Men’s performance at the 1st Bank Center on 10/13 was that of thundering explosions, and perhaps a different expectation than what the Colorado crowd had assumed. But the ensemble of black-clothed players and the voluminous entrance of instruments created a powerful set-up for the rest of the night.

The Icelandic band’s new album, Beneath the Skin, was released June 9th, and it is artistically opposite of My Head is an Animal. The new album doesn’t allow for easy sing alongs or inspiring head nods. Rather, it does exactly what the title promises–it probes beneath the skin and does so with darker undertones and naked lyrics.

The show was intermixed with crowd favorites and new tunes, all featuring ringing guitar solos, pounding rhythms and lilting voices. Nanna Bryndis Hilmarsdottir always gave a chirping, “Thank you,” at the end of each song, and her breathy voice and accent allowed for an open and fun environment, as if the band was just an old friend you were catching up with. When the song, “King and Lionheart,” began to flow out of the artistry, the band made sure to heighten their activity with the crowd–band and audience members alike danced around, pumping their fists and bouncing their heads. One could sense that the band was  in sync. The streaming and flickering lights helped boost the positive ambiance, and it was hard not to move your lips in time with Hilmarsdottir’s. 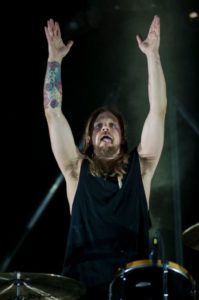 The sets mirrored mountains and valleys–old songs from previous albums created an upward growth of dancing, while new songs allowed for a break from movement and inspired a silent awe for the band’s beautiful control over their instruments and vocals. The song “Black Water,” exemplified this; Ragnar Porhallsson, the male lead singer, opened up the melody while Hilmarsdottir took over with the lines, “In the deepest depths I lost myself / I see myself through someone else.” Where band’s debut album designed a space for big band theatrics and happiness, Beneath the Skin brings their performance to a more personal level.

Then came “Mountain Sound,” and of course a Denver scene was going to adore this hit. I think the band knew it, too–they took the time to announce the song and laughed at the crowd’s cheering response. After a few minutes of pure joy, they entered back into darker tones, and it sounded as if rain were falling upon the auditorium. Their splinter of positive vibes allowed the music to become more complex. I kept thinking that the fragile vocals were the fixture to gaining entrance into their world.

Their brass section was one of my favorites–the two women trading instruments from trumpets to trombones, accordions to keys, had their talents trained to create grand melodies and dramatics. It was obvious to see the band played off one another’s energy and it successfully captured an entire auditorium. The syncopation and rolling rhythms was the anchor between the differences throughout the track list. 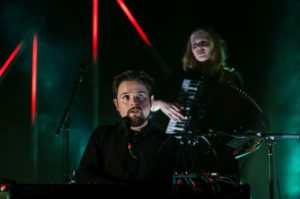 They ended with “Lakehouse” and “6 weeks,” appealing to what the crowd knew. But their encore, I think, was hauntingly gorgeous. With just a few instruments rather than their engorged band, Hilmarsdottir sang “Organs,” and phones quickly lit up all over the arena to highlight the beauty of it. Her ability to be raw and strong at the same time was palpable, “So I take off my face / Because it reminds me how it all went wrong…But I leave in my heart / Because I don’t want to stay in the dark.”

I know I am not alone in the sentiment that  just two hours of this graceful band was not enough, but I still left the center feeling full of music and satiated through their art. 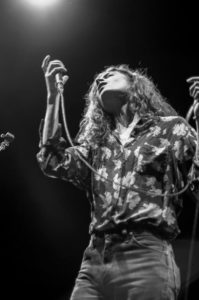 The L.A. based band, Born, was one of the two openers for Of Monsters and Men. Electric jingles and heavy drums made for a lively dance party.