We made it! 303 Magazine is excited for the first pool party extravaganza of the year, where DJ Phonique, hailing from Berlin, is set to rock the house. His smash hit, “Feel What You Want,” has over 25 million views on YouTube and counting. His set is sure to keep the fists pumping and heads bobbing all night, as well as accentuate the perfect day down at The Breakers Resort Pool. With the forecast calling for nothing but sweet sunshine on Sunday, where else is there to be?

Of course, DJs’ sets are largely dependent on the equipment providing that colossal, gut-busting sound. We were curious about all the hard work that goes into setting up the perfect gig as the sound equipment and the dedicated folks responsible for piecing it together are crucial for any show’s success.

Fortunately, we had a chance to satisfy this curiosity. We caught up with the sound gurus from Static.Industries to discuss what it takes to successfully melt fan’s faces and what new technology they plan to install poolside. Check out the interview below, and we’ll see you Sunday at The Breakers. Don’t forget your suit! 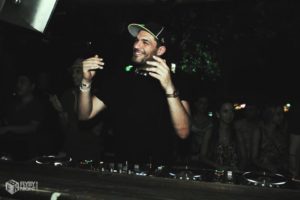 303 Magazine: Describe a day in the life of sound tech. It must get hectic.

Static.Industries: A day in the life of a sound tech is definitely interesting. And it can be wildly different from day to day. Depending on the needs of the client, every gig can be very different. Sometimes you have a larger team of people and everyone has their own specific role. Other times, you find yourself filling five or more jobs all at once, which is when things can get quite overwhelming.

How’d you get your start in the industry?

I pretty much had two separate jobs in the industry that started about the same time. On the live music side, I was the house engineer at the Buffalo Rose in Golden. Doing that, I ran sound for front of house, monitors for the band, stage managing and running lights — all at the same time. It was a lot of work, but I learned a lot from it. About the same time, I started working in a studio, also filling a number of roles. Sometimes I got to be the assistant engineer, but mostly it was maintaining the gear, and booking sessions and just keeping the studios in good condition.

How long does an average setup take?

The average setup is also very dependent on the gig. Sometimes you have just a basic PA system just for talkback and some background music — a lot of times that can take 20-30 minutes. Other times, you’ll work with artists that have very specific technical requirements, and you end up setting up the system the entire day before the show, and then sound check for several hours the morning before the gig. So, anywhere from 20 minutes to a couple of 18-hour days.

Do you have a favorite venue in the metro area?

We’re incredibly blessed here in Denver. We have so many fantastic venues, but Red Rocks trumps everything.

303 is stepping their game up and going surround sound for this year’s pool parties. What can patrons expect?

We’re really excited for the new setup too! I think more than anything, you can expect good quality sound throughout the whole party. Instead of just having several really loud speakers by the stage, we’ll have a number of speakers playing at more moderate levels to evenly cover the whole area.

Do you have a chance to relax and enjoy the music during the shows or are you constantly tweaking the system?

I do a lot of actual working throughout the event usually. But, especially when I’m working with DJs instead of bands, I have a bit more time to relax and play, since I’m not constantly riding 20+ faders.

I think there are a number of things that set us apart from the crowd. We’re actually a very diverse company for how small we are. We really like to push the bounds of what technology is capable of. We develop plug-ins for music production; one of our big focuses is actually on 3D surround sound. My business partner, Nev, takes the performances of electronic music to a place they’ve never been seen before. It’s funny; we have very different backgrounds, but we complement each other very well.

Best part of the job?

The best part is the music, plain and simple. A close second is the overall production of the show, and just observing the experience you create for the audience. A lot of times, it’s easy to lose track of the big picture, but as soon as you hear someone you don’t know talking to their friends about how amazing a show you helped put on was, you get that perspective back pretty quick.

What’s the biggest gig Static.Industries has been a part of?

Actually, Static.Industries is practically a brand new company, so this is one of our first gigs as a company. But, Nev has 400,000+ followers and over 41 million plays on YouTube. I ran sound at Independence Eve last year for the a cappella group, MIX, as they performed in front of nearly 100,000 people. I’ve managed the DJ booth the last two years at Decadence, which was the biggest electronic New Year’s Eve show in the country. So we definitely have some experience under our belt, but we’re looking forward to pushing forward to even bigger and better things together.